A recent Supreme Court decision and union upheaval have emboldened the efforts of the Freedom Foundation. 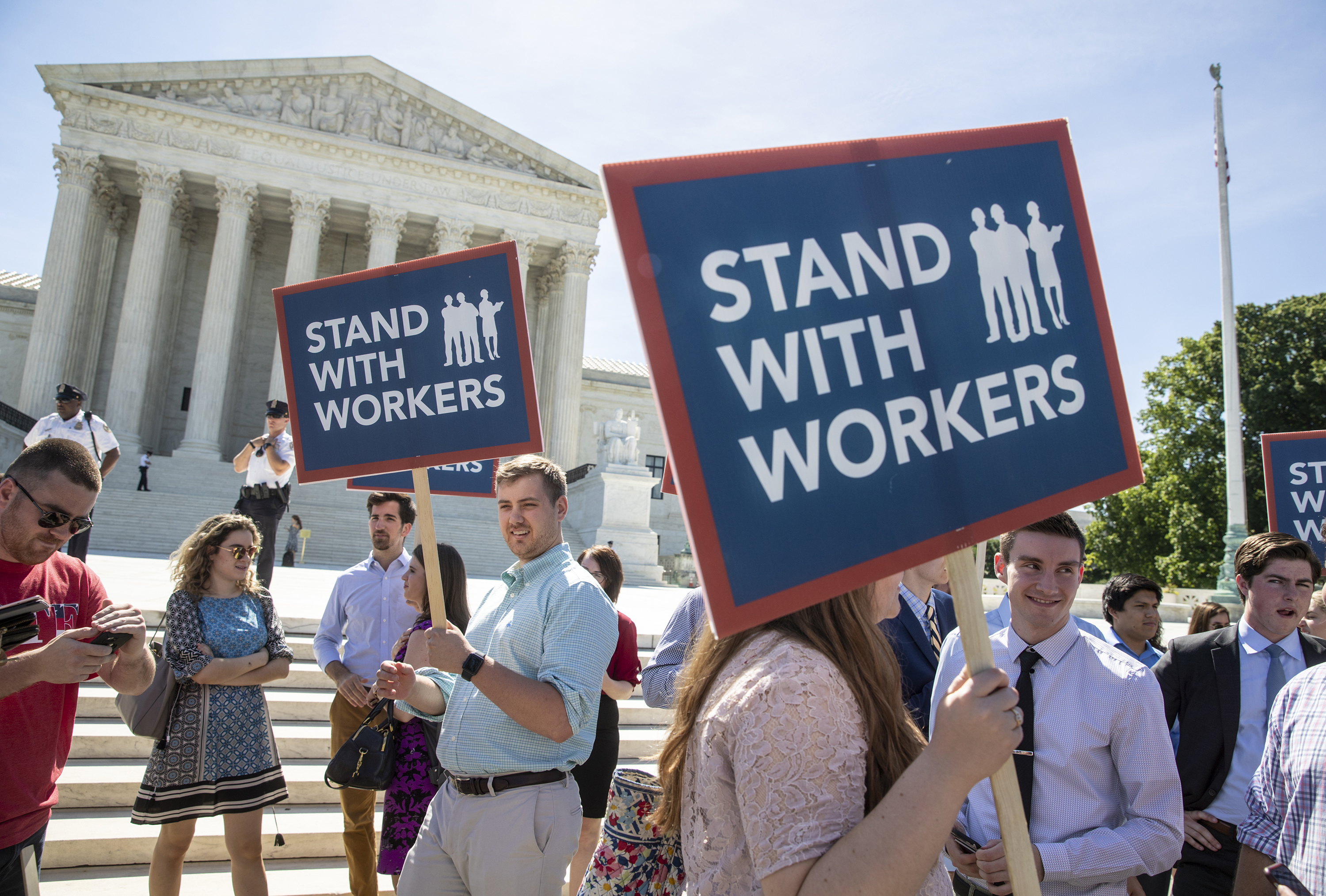 In this Monday, June 25, 2018 photo, people gather at the Supreme Court awaiting a decision in an Illinois union dues case, Janus vs. AFSCME, in Washington.  The Supreme Court says government workers can't be forced to contribute to labor unions that represent them in collective bargaining, dealing a serious financial blow to organized labor.  (AP Photo/J. Scott Applewhite)

It couldn’t come at a worse time for the City of Seattle’s largest public sector union: Two weekends ago, its executive director, Behnaz Nelson, was fired. She’d been on paid leave since January for “administrative issues” that put the union at “exceptional risk,” according to meeting minutes.

What may have otherwise been a bit of inside politics — described by one former union member as a “stupid and sordid” affair — has become fodder for the Freedom Foundation, a conservative think tank that has a history of taking on unions in Washington state.

The organization, which receives funding from the Koch brothers-backed Donors Trust, has stepped up its campaign to inform union members of a recent decision from the U.S. Supreme Court allowing public sector employees to opt out of mandatory union dues. News of internal upheaval is already being put to use as the dueling campaigns between pro- and anti-labor groups kicks off.

“It’s the sort of thing that might give someone concern about joining the organization,” said Maxford Nelson, the Freedom Foundation’s Director of Labor Policy, who has been pushing out Nelson’s troubles in her union, PTE Local 17, to the group's followers.

The Supreme Court’s 5-4 decision in the case of Janus vs. AFSCME has sweeping implications for public sector unions. Not only does it threaten budgets, but labor advocates fear that even employees who currently belong to the union will drop membership while still benefitting from its leverage — the so-called “free-loader” scenario. It’s a decision that will land hardest for teachers’ unions.

Conservative groups celebrated the decision as a win for free speech and choice.

“The silver lining is that it’s going to force us to be more engaged with our members and that’s always a positive thing,” said Shaun Van Eyk, a union representative with PTE 17, which represents nearly 3,000 city employees.

In Washington State, that battle has occurred most clearly among employees that are part of the state retirement system, which includes state employees that work in Seattle and King County employees. The group successfully obtained personal contact information from the retirement system by way of a public records request and have sent out fliers billed as “An important notice of your rights,” informing employees they can drop membership and save money.

In Seattle, however, contact information for city employees has mostly been kept under locks. The city has its own retirement system and, according to its Executive Director Jeff Davis, no records requests have come in. Laura Southard, deputy director and interim labor relations director with the Seattle Department of Human Resources, said she’s not aware of any requests for information.

Still, Van Eyk assumes that information about city employees will get out eventually.

And in fact, some of it already has, according to Nelson with the Freedom Foundation. “I can confirm that our first direct mail piece to inform public employees in Washington of their rights under Janus reached certain City of Seattle employees, but I don’t have a specific number,” he said in a follow-up email. “We’ll continue to work to make sure that all public employees in the state know about and can meaningfully exercise their First Amendment rights if they choose.”

Like other public sector unions, the city began preparations for an unfavorable Janus ruling months ago. “One specific change the city has implemented over the last month is the new state law which provides unions with 30 minutes during new employee orientation to speak to represented employees,” said Southard with Seattle HR in an email.

Additionally, PTE Local 17 recently changed its bylaws in anticipation of the Janus decision so that union members can only drop membership from December 1 to December 20. It’s an effort to slow exits. But Deidre Girard, Communications Director with the union, said she expects the Freedom Foundation to step up its campaign in the fall, in advance of the newly limited window.

As for the union’s executive director, Behnaz Nelson, the reasons for her exit are unconfirmed. Despite rumors among members, the union’s leadership declined to provide details. When contacted, Nelson, who also served on Mayor Jenny Durkan’s transition team, said she was unable to speak to the situation, but may do so at a later date. When asked if there were legal implications, she declined to comment.

The union is downplaying the significance of her firing. “While the Executive Director serves an important role at our organization, the decision-making power at our union is distributed amongst our members,” Girard said in a statement. “This is different than many other corporations and non-profit organizations. The delegates of our [Regional Executive Committee] made this difficult decision after conducting a thorough investigation and with much careful consideration. They followed all policies and procedures outlined in our by-laws, and their decision was made solely with the best interest of the union in mind.”

But Nelson with the Freedom Foundation is following the situation with interest. And he may have an audience. According to one city employee, some members are frustrated with leadership in the union and the saga of its Executive Director has made that worse.

For the city's part, it says it's supporting its unions. "In the coming months," said HR's Southard, "like other cities impacted by this decision, the City of Seattle will be more specifically detailing how the Supreme Court decision impacts all represented City employees and their contributions."