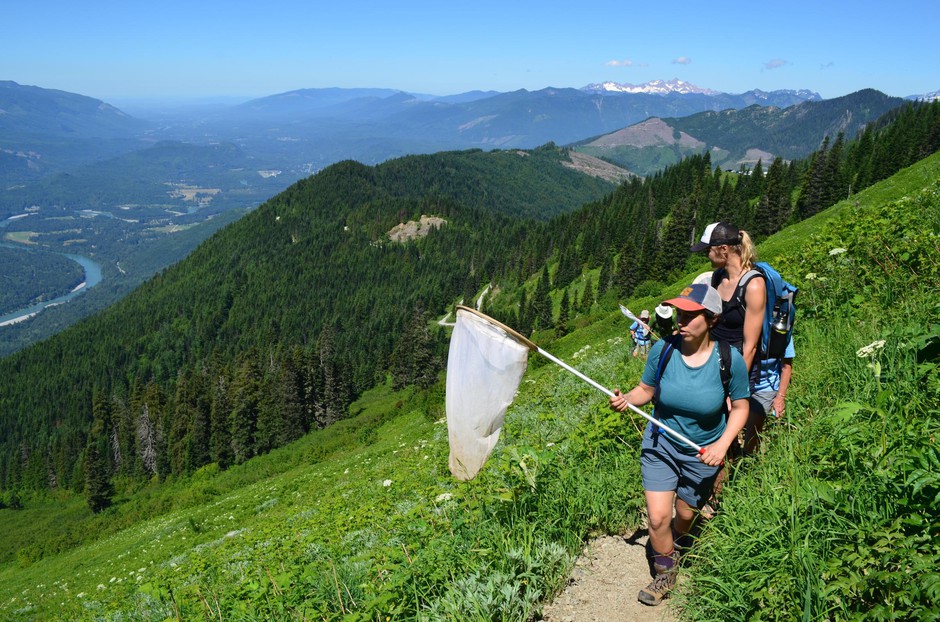 “These guys are big — like we think of a monarch, maybe — big like the palm of your hand,” Bradbury says. “They’re pale bright yellow. Very, very beautiful.”

She says she hasn’t seen many swallowtail butterflies in Seattle before, but this summer she sees them every day.

She posted about it on Facebook. And, she says, her friends said, “Yes! It’s a thing! There seem to have been more this year.” Bradbury asked KUOW to investigate.

David James, a butterfly expert at Washington State University, told me swallowtail butterflies have been more common on the west side of the Cascades for the past couple of years — probably because Seattle has had unusually warm, sunny summers. This helps with mating, because they can find each other more easily when it’s sunny.

“They are lovers of sunshine,” James says. “It wouldn’t take a lot more sunshine to improve the ability of the butterflies to, you know, find each other, mate, and lay their eggs.”

Swallowtails are doing well also because they like plants that are common in urban parks and gardens. Their caterpillars need trees like willows, cottonwoods, and maples.

“The adult butterflies need nectar plants of which they can find plenty in most people’s backyards,” James says.

So, these days, there are more butterflies to bring happiness and joy to our lives. But the story is more complicated, of course.

Swallowtails are doing well, but other butterflies are losing habitat to cities and farms. Pollution and pesticides have also been unkind to butterflies.

That means, unfortunately, swallowtails are the exception.

“We do not see as many butterflies flying around as we used to when we were children,” James says.

In the Pacific Northwest, there is no long-term study that shows how butterflies as a whole are responding to habitat loss and climate change; most of what we know is anecdotal, such as the increased reports of swallowtail sightings.

Elsewhere in the world, reports show how butterflies are faring.

In Europe, for example, “they’ve noticed different species of butterflies expanding their range north,” says Regina Rochefort, a retired National Park Service scientist. And, Rochefort adds, “California has a very long-term study and has shown butterflies moving up in elevation.”

In 2011, Rochefort asked volunteers to help her conduct an annual survey of butterflies in the North Cascades and at Mount Rainier.

Sauk Mountain is a nearly treeless peak in the North Cascades. Its exposed slopes are covered with grasses, wildflowers, and insects looking for nectar in those flowers. That makes it the perfect place to learn how to count butterflies.

Riley Gabriel, with the North Cascades National Park, does the teaching. She says, first, to imagine a five-meter-by-five-meter box in front of you.

“Any butterfly that flies through that box, that is on vegetation on either side of the trail, that is on the trail in front of you, you want to count that butterfly,” Gabriel says.

One of the keys to accurately counting butterflies is walking slowly. “We call it the bridal march,” she says.

Gabriel and Rochefort are still looking for more butterfly-counting volunteers.

And, says David James with WSU, those who can’t make it to the mountains can help too.

“We can take hope from the swallowtail,” he says. If people plant butterfly gardens to provide food for some of the species that aren’t swallowtails, he says, “then [butterflies] are going to do okay.”