Don’t call it a comeback, but condos are returning to Seattle

Long dormant, the condo market finally shows signs of life. But who will be living in those towers? 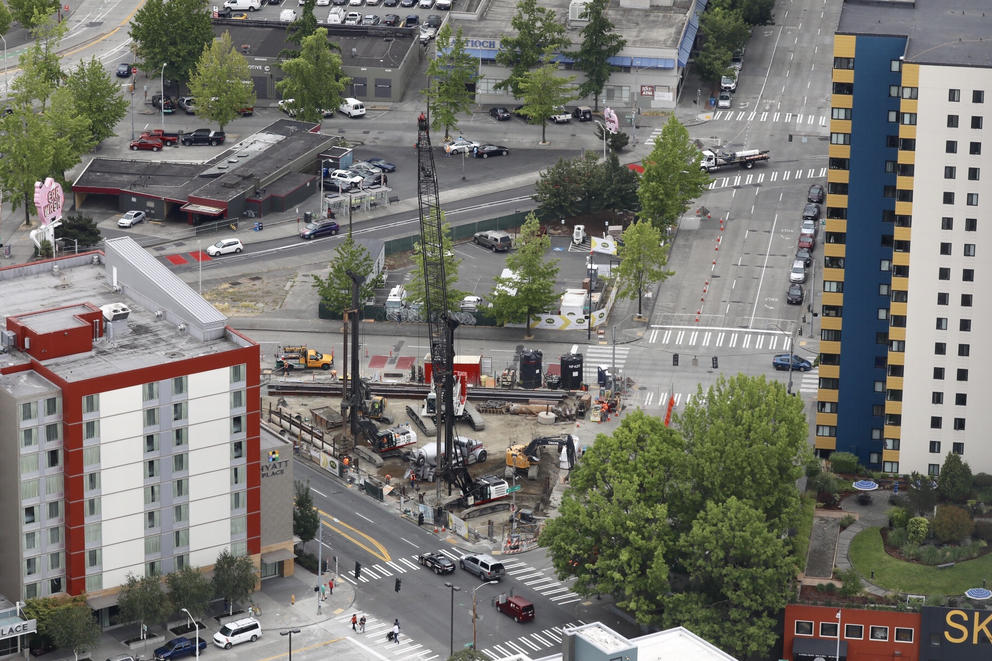 Construction of a new condo development is underway at the triangle formed by Denny Street at Wall Avenue and 6th Avenue in downtown Seattle, July 9, 2018. (Photo by Matt M. McKnight/Crosscut)

In late June, the developer of a 41-story tower at Wall Street and Denny Way did something that would have been considered unlikely when the development was approved in 2015. Then the Spire was planned as 352-units of market rate apartments. But shortly before breaking ground last month, the developers announced that when the building opens in two years it will be filled with condos.

The Spire is one of just six condo projects slated to open in Seattle between now and 2020. That is not a lot, but it’s more than the trickle of projects the city has seen recently. Between 2012 and 2015, for instance, Seattle got four new condo buildings (one of which had just two units).

Compare that to the mid-2000s when, according to Windermere Chief Economist Matthew Gardner, Seattle had nearly 40 condo projects constructed or permitted in just a three-year span. Conversions of apartment buildings to condos saw a similar drop off with just 15 buildings converted from rentals to sales since 2009. In the five years before 2009, 297 apartment buildings containing 6,115 units converted to condos.

Demand for condos has remained red hot throughout. Some buyers camped out the night before units went on sale for the Koda condos earlier this year. A similar scene played out for the Nexus in 2016. The vast majority of the units in both buildings are already sold even though neither has finished construction.

That demand, coupled with the slight increase in new condo projects and a cooling rental market has some industry insiders crossing their fingers that the market might finally be turning around — and fretting over the roadblocks that could keep it from doing so.

On paper at least, condos are becoming an increasingly sound investment when compared to apartment rentals. That has not been the case in a while. From 2010 to 2015, for instance, the vast majority of new construction in the city was apartment buildings while new condo construction in that period remained well below 10 percent. Single-family homes and townhouses accounted for the remaining 20 percent.

Yet, after years of skyrocketing rents incentivizing apartment construction and little else, rents are beginning to flatten. Meanwhile, condo values are still appreciating 16.5 percent year-over-year, according to Zillow Economic Research Director Aaron Terrazas.

It’s a glimmer of hope for housing advocates and real estate professionals who see condos as a critical and missing piece of the Seattle housing landscape.

With the median home price in Seattle now above $810,000 and just a handful of houses and townhomes on the Seattle market available for less than $500,000, some people see condos as a potential path to home ownership for the city’s middle class. Margaret Morales, Senior Research Associate at Sightline, says that in an ideal world, condos would be an attainable entry to homeownership for, “people in their early 30s, first time home buyers, people over 65 who are downsizing.”

But that does not appear to be happening. Because of high land and construction costs, state laws that all but guarantee that condo developers will get sued and zoning laws that severely limit where condos can be built, developers are currently building luxury high-rise condos and little else. With those factors unlikely to change anytime soon, some industry experts think it’s unlikely Seattle’s condo market will serve anyone but the wealthy.

“I think we’re going to see an uptick in luxury condos in the current market … that is where the price point makes it worth it for the developer,” says Nathan Gorton, Washington Realtors’ Government Affairs Director.

There is no silver bullet to bring down costs, but experts agree that revising the Washington Condominium Act is a good place to start. That’s easier said than done.

“Washington has the most onerous laws and they’re unlikely to change,” says Windermere’s Gardner. “There’s very little in the way of political will to change this.”

The condo act was created in 1989 as a way to give condo buyers a recourse for shoddy construction. “There were real legitimate concerns with condo construction [in the 80s] … particularly with water penetration,” explains Gorton. But, he says the scales tipped too far in favor of buyers in response. In the late 90s and early 2000s, the new law led to a string of high profile lawsuits against condo developers. Developers argued that the defects they were being sued over were minor. The law sided with condo owners.

Today, developers say it’s almost inevitable that the home owners association will sue after a condo project opens, a costly risk many are unwilling to take. The threat of lawsuit means developers have to take out expensive insurance policies that drive up costs.

Developer Tony To told KIRO 7 that he had to pay $800,000 to insure his 2010 condo project, but estimated it would have cost about $25,000 to insure a similar sized apartment development. (The homeowners association sued the developer after the project opened). It also makes risk-averse banks wary of giving loans for condo projects, says Gardner.

“Luxury units don’t need the change in the law. Because of the amount of money a developer will make, they’re willing to take that risk,” says Gorton from Washington Realtors. “If we want to see the kinds of condos we think are necessary for first time home buyers or downsizing seniors, we absolutely need some changes in the law.”

State Rep. Tana Senn (D-Mercer Island) attempted to do just that in the 2018 legislative session. Her bill would have required that a majority of the condo owners vote to sue, rather than a majority of the condo board. It would have also given developers more leeway to fix defects before being sued. But Senn’s bill died in committee, nowhere near passage. She plans to reintroduce it in 2019.

The potential impact of a revision like Senn’s can be seen in Colorado, where a similar condo law was once blamed for a lack of development. In 2017, state lawmakers revised it to create a greater threshold for lawsuits. In the year since its passage, Denver has seen an uptick in condo development, though it has been very modest at 7.4 percent.

Even if Washington’s condo act is revised, Gardner thinks Seattle is still a long way from a condo boom.

That is due to one other major barrier: zoning. Condos are only allowed in a relatively tiny sliver of Seattle. Currently 49 percent of developable land in the city is zoned for single-family housing while just 8 percent of land is zoned for multi-family housing (aka apartments and condos), mostly within urban villages. With looser zoning laws, developers could build condos in more outlying neighborhoods where land prices are less expensive than the urban core.

“We need a lot more housing,” Gardner says. “Seattle needs to analyze its zoning and argue whether it’s appropriate. We are not a dense city or even close to it. You can fit the whole of Paris in north Seattle and Paris has a population of 2.2 million.” Seattle currently has a population of about 704,000.

As with the state condo act, there is little political appetite for sweeping changes to Seattle’s zoning. An early draft of the city’s Housing Affordability and Livability Agenda (HALA) proposed greater density across single family zones, but the idea died in the wake of massive outcry from residents. Now just 6 percent of Seattle’s single family zones will see greater density as a result of HALA.

Meanwhile, the condo market continues to loosen. The latest market report from real estate group Northwest Multiple Listing Service found the number of condos for sale in Seattle – both new and previously occupied – up 139 percent in June 2018 over the same time the previous year. Countywide inventory is up 72 percent.

Seattleites have received mixed messages about spending time in parks. We should encourage outdoor socialization as much as possible.