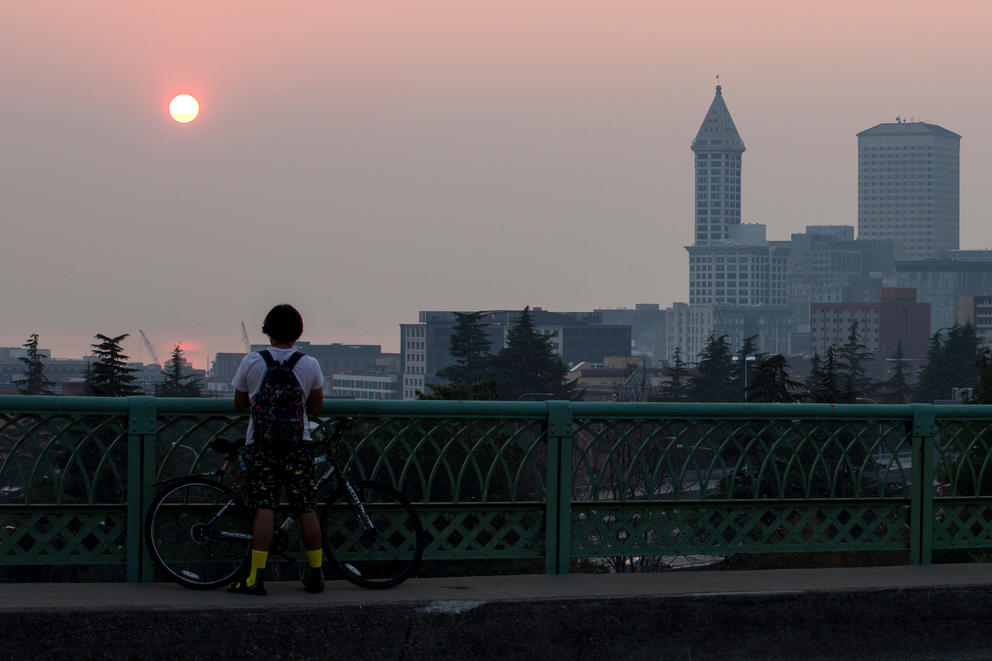 A man stands on the Jose Rizal Bridge in Seattle and looks at a smoky sunset caused by wildfires in British Columbia, August 2, 2017. (Photo by Matt M. McKnight/Crosscut)

Red moons, strange light, disappearing mountains: It’s the start of wildfire season, complete with this year's record heat and an oppressive, smoky haze dimming the Seattle skyline. But while Eastern Washington begins to battle blistering flames, the source of that all-too-familiar smoke isn’t really from fires in the eastern part of the state — or anywhere close by, for that matter. Instead, we have faraway blazes in B.C., California, and even — wait for it — Siberia to blame.

How can such distant sources of smoke create a haze in Western Washington? According to Larry Altose, the Northwest region spokesperson for Washington’s Department of Ecology, it’s because of a weather pattern called “long-range transport.” Fires inject smoke into higher layers of the atmosphere — say, somewhere thousands of miles away, like Russia — and air circulation patterns transport the tiny particles of smoke at high altitudes to different places.

“It can get mixed into weather systems that regularly drift across the Pacific,” Altose says. “It can happen with dust storms, it can happen with smoke. We’re connected to different parts of the world with atmosphere — often we don’t notice it.”

This happens a lot. The only difference this time, Altose says, is visibility.

Most foreign smoke gets caught in jet streams that stay higher up in the atmosphere. But the Siberian wildfire smoke has pushed past the Canadian Rockies to sink and settle over Western Washington. Erik Saganić, an air quality scientist for the Puget Sound Clean Air Agency, says that while there’s a lot of smoke in the upper levels of the atmosphere from B.C. and eastern wildfires, the bulk of what Western Washingtonians are seeing is Siberian, where intense fires have set the taiga ablaze since mid-July.

The one upside is that since the smoke has traveled such a long distance, it poses minimal threat to vulnerable populations.

“The good news when pollution comes from further away is that generally, the air quality isn’t as degraded,” Saganić says. “The pollution has space to dilute.”

In short, increased smoke visibility isn’t necessarily an indicator of danger. Coastal Washington has generally fared much better than the rest of the state, and Saganić says that air quality can actually get worse during the wintertime, when residential home heating contributes to higher levels of pollution.

“It’s fairly unique for Western Washington to see a lot of days of unhealthy smoke for sensitive groups,” he says.

Ranil Dhammapala, an atmospheric scientist for the Washington State Department of Ecology, says that Eastern Washingtonians will get the brunt of consequences as local fires inevitably continue to spark up. The map in the Washington Smoke Information blog (which Dhammapala contributes to) shows the air quality along Washington coast as significantly better than the East, where much of the state’s local fires will burn and many areas are already rated as “moderate” in air quality.

Residents in Tacoma and Pierce County might see some additional smoke from local fires near Mount Rainier, and people in Whatcom County will see haze augmented as small local fires continue in Methow and Lake Chelan. Eventually more smoke from Oregon and California will likely make its way to south central and southeastern Washington, according to both Saganić and Dhammapala.

While Dhammapala predicts that the smoke in Seattle will lift by Wednesday evening, it’s certain to come back, perhaps as soon as a few days from now.

“This is just the beginning of the fire season,” Dhammapala says. “We’re going to be dealing with this, fires and smoke, for the next six weeks.”

A previous version of this article mislabeled Larry Altose as the Northwest region head of the Washington’s Department of Ecology. It has been updated.