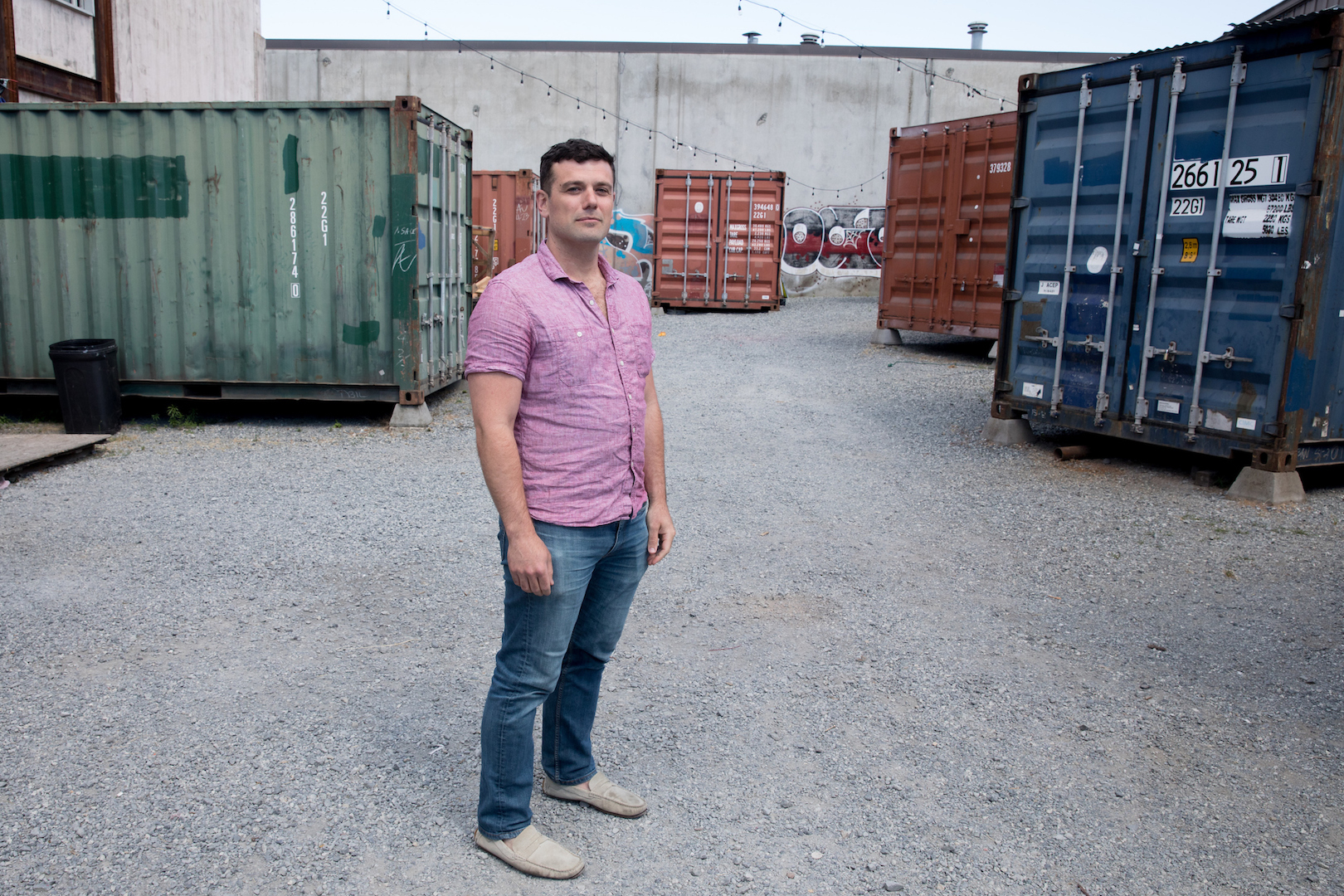 One of Seattle’s most inventive theater directors is inviting you to a wedding — in the loading dock of a warehouse. It’s not his own nuptials that Ryan Guzzo Purcell is celebrating, but the union of a young couple conjured by the great Spanish poet-playwright Federico García Lorca (in a translation by the Black American poet Langston Hughes).

A band will play. Paella and sangria will be served. The dress code: casual. What else would you expect from an affair that takes place outdoors in the arty, post-industrial section of Georgetown?

All that’s needed is a pay-what-you-want ticket that admits you to the workshop version of Blood Wedding, a classic play the adventurous Purcell is reconfiguring as a sense-a-round community experience. Held outdoors Aug. 2-4 — outside Equinox Studios, a former World War II-era factory converted into artist studios and galleries — Blood Wedding will be “a street festival, as much as a theater performance,” he explains.

And it won’t be the first time Purcell, a former Fulbright scholar and Princess Grace Award-winning director who is quickly establishing himself as a compelling and daring younger theatermaker, has transformed a venerable drama into an interactive event.

Dissolving barriers between the audience and the action is a central credo of this 36-year-old Seattle native, who fell in love with theater during school trips to the Oregon Shakespeare Festival in Ashland, OR. Later he studied drama at two prestigious theater schools: Boston University, and Brown University/Trinity Repertory Company, where the emphasis was squarely on fresh-off-the-computer new plays. But even during a two-year stint at San Francisco’s Magic Theatre, a respected hub for new scripts, Purcell was drawn to classics — particularly the venerable plays that touch a modern nerve but don’t get produced enough.

“I wondered, what if we do a [classic] play and add another layer of thought in how we experience it?,” says Purcell, whose leading man good looks and easy charm might peg him as an actor rather than the behind-the-scenes engine of The Williams Project theater troupe (named after Tennessee Williams).

That “extra layer” is a sense of deeper “immersion,” to use the trendy term for direct audience involvement. “When you can get a bunch of people in the same place, and they go through something intimate, entertaining and tragic together, it’s really meaningful,” he suggests. “I believe communal experiences of joy and sorrow are key to healthy societies.”

Numerous local companies are using “immersive” strategies, such as leading audience members from scene to scene through different locales. But Purcell’s Williams Project is an anomaly in several respects.  The acting is consistently strong;  the company is a loose, racially diverse aggregation of professional stage and film artists based in Seattle, New York and California — including (in Blood Wedding) fellow local native and Broadway veteran Brittain Ashford. Ticket prices are flexible to keep shows accessible, though performers are paid “a living wage,” Purcell explains (achieved mainly through vigorous fundraising). Rehearsals happen out of town (for Blood Wedding, at a retreat center in coastal Ocean Shores), in concentrated week-long bursts. And each show gets a quickie developmental “workshop” run in Seattle before returning months later after more tinkering. Purcell expects this weekend’s first draft of Blood Wedding to be “the messiest and the freest” draft.

Since returning to his hometown several years ago, Purcell has concocted several short-run but high-impact Williams Project productions that bring audiences deeper into a play.

First up, in 2015, was Tennessee Williams’ Orpheus Descending, in a co-production with Intiman Theatre. A darkly sensuous 1950s tale of a woman shopkeeper in a bigoted Southern town and the vagabond musician who liberates her, this fever-poem of a play had rarely been staged in Seattle. Purcell brought the theme of outsiders and minorities at the mercy of cruel social forces to vibrating life with patrons sitting close to the riveting, gender-shifting cast and a strikingly surreal set.

“I first saw the show in the workshop version,” remembers former Intiman artistic director Andrew Russell. “It was just stunning work. Ryan is not only good at directing, but also at understanding the big heartbeat behind a play. I got really excited about what he was doing.”

Purcell went on to add a different twist to a more familiar Williams drama, The Glass Menagerie at Café Nordo. The event included a sit-down supper akin to what a Depression-era St. Louis family prepares for the “gentleman caller” in that seminal play.

While the melding of meal and drama was not entirely successful, the treatment was novel, with affecting jolts of intimacy (some audience members were seated at a long dinner table alongside the actors) and modernity.

Blues — a scorching, rarely revived 1964 drama by James Baldwin — evokes the combustible racial tensions in a Deep South town during the Civil Rights Era, which result in the killing of a young Black minister’s son by a local cop. Purcell’s pulsating rendering was in part a response to the 2016 fatal police shootings of two unarmed Black men, Alton Sterling and Philando Castile, and the protests that followed.

“When we read it I thought, ‘God this is timely,’” Purcell recalls. “I kind of dreaded doing it, which was a sign that we had to do it.”

The Williams Project version knocked hours off the original, elongated script. But, Says Carter, “The show just blew me away. The acting was so strong and the play felt so modern.”

Carter was also struck by “Ryan’s commitment to broadening the audience” by presenting Baldwin’s play, complete with mini-gospel choir, at Franklin High School (Purcell’s alma mater), and at the Emerald City Bible Fellowship Church in Rainier Valley instead of more formal theater spaces. (I saw it at the church, a powerful place for a drama that confronts shattering spiritual and moral questions.)

A post-show discussion was held after each performance, with Black and other audience members voicing their responses and concerns. “At Franklin, 90 percent of the students stayed afterward to talk with us,” says Purcell. “With many of them, the conversation became about their own fears of violence today. Our mission is always to find out how the piece we’re doing connects with the right audience, at the right time.”

During Blood Wedding’s short workshop run, Purcell hopes to draw the audience to the work in other ways. In addition to the play, which merges aspects of Spanish culture and ancient Greek theater, and the food and festivities, Purcell also wants to display and showcase the work of Seattle visual artists.

Act 1 will take place at an Equinox loading dock, with its piled-up tires and blue metal container boxes as “a more traditional kind of performance.” But later, after the bride in the play runs away from her arranged wedding and into the woods with her true love, the audience will drift into a more open area, a phantasmagorical forest crafted by local artisans.

“We’ll have chairs for people who want to sit, but you’ll be free to wander,” says Purcell. “It will be a looser thing, a hodgepodge of what I call mosaic theater.” In a future version, he hopes to focus “even more on the partnerships with visual artists and on making the whole show an art installation.”

The challenge, even the potential messiness, pleases him. “I always felt these great plays shouldn’t come across as academic, boring or old-fashioned. We want our company to look like America and Seattle and the work to be very accessible to different kinds of people.”

Immersion is not a gimmick with Purcell. It’s a credo. “I don’t believe you’re either doing high-quality theater or theater that’s accessible,” he says “I think the best theater happens when those two viewpoints are in conversation with one another.”

If you go: August 2-4 at Equinox Studios in Georgetown (Pay-what-you-can; $50 suggested price)