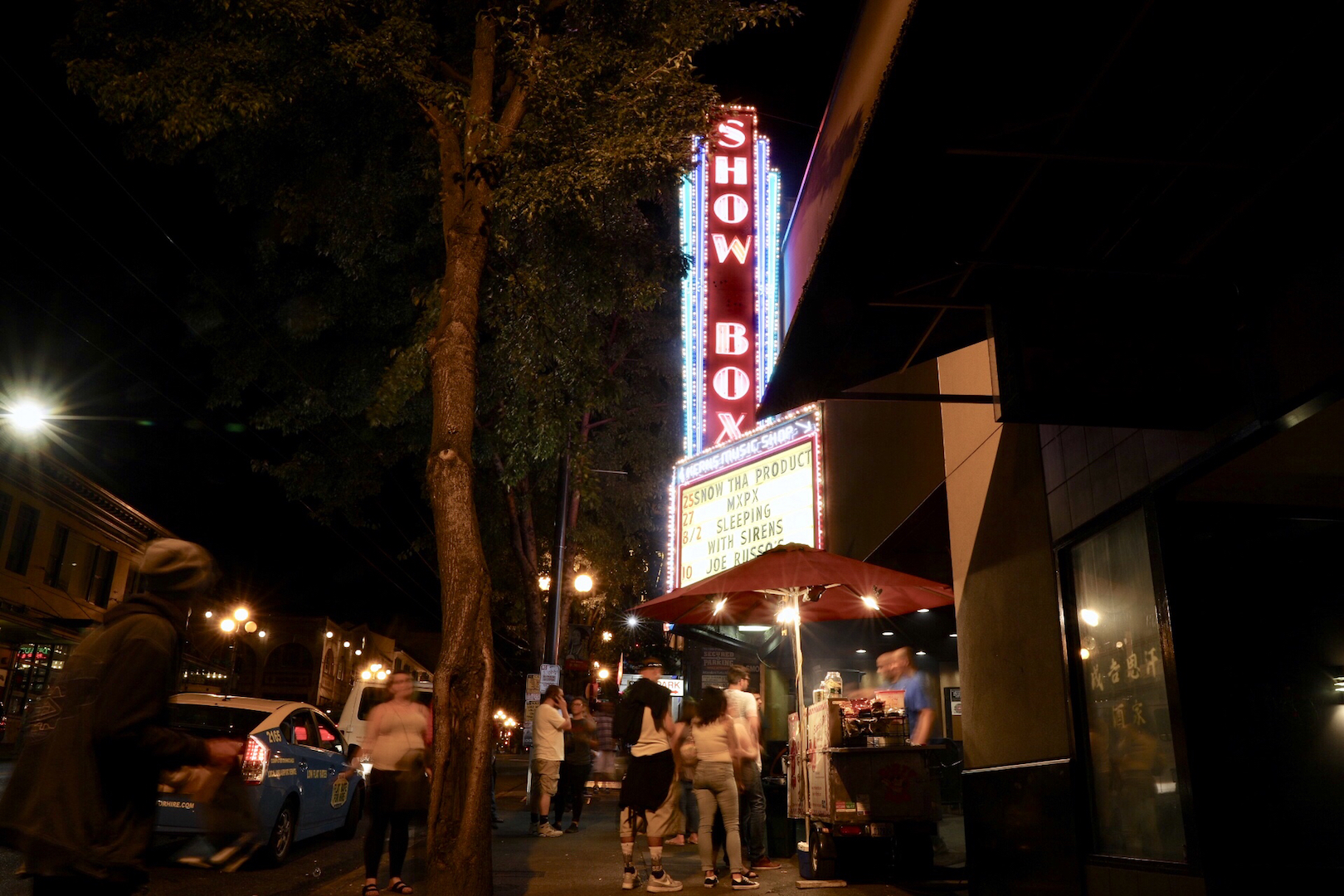 The Showbox in downtown Seattle. July 25, 2018 (Photo by Matt McKnight)

In what felt to me like some kind of grand cosmic joke, news that Seattle’s Showbox nightclub might close leaked on Tuesday, which also happened to be the 79th anniversary of the day the storied club opened to the public.

Over the years, the venue has hosted concerts by everyone from Duke Ellington to Iggy Pop to Pearl Jam. Located on First Avenue right across from the Pike Place Market, the Showbox Market consistently shows up on lists of the “best clubs” in the nation in industry publications and the room is booked most nights during the week, often to capacity crowds (another associated venue, the Showbox Sodo, isn’t presently threatened).

But the Showbox has been more than just a concert venue — it’s been a place where musical magic gets made, and a particular kind of Seattle magic at that. The club is basically a big ballroom, which means it’s nearly as wide as it is deep, so the acoustics are excellent, as is the sense of communal joy often found inside. There are a couple tiny VIP sections in the 1,100-capacity hall, but ironically those don’t offer as great a view. Audiences come to the Showbox for music, but also for a sense of community in the kind of no-frills, blue-collar hall that for years has been a Seattle standard.

When Soundgarden reunited after a long hiatus, Chris Cornell told me the only place he even considered performing in Seattle was the Showbox. In an interview last year, Mark Lanegan enthused the Showbox “more than anywhere else in the city, it feels like home.” For me, it’s been a home where I saw dozens of early punk bands like Blondie, comedians like Robin Williams when the club was briefly focusing on comedy, and current superstars like Macklemore and Ryan Lewis playing a charity gig.

Like almost all of Seattle’s music clubs, though, the Showbox is not a designated or protected landmark. The business is operated by AEG Live, but the property is owned by others; the Onni Group, a Vancouver B.C. developer, has filed plans with the city to replace the club with a $100-million apartment complex. Onni is also involved in several other major Seattle developments, including an office tower on the former site of The Seattle Times offices on Fairview Avenue.

The redevelopment isn’t a sure thing and no date for demolition is scheduled, but the neighborhood has few single-story buildings left. Next door to the Showbox, a 14-story hotel is also slated. The hotel project stirred a local petition drive because the scale will dwarf the historic Pike Place Market, but that hotel has continued to move through the city’s design review boards. The Showbox development will be three times as high as the hotel.

To many Seattle music lovers, the idea of replacing the venerable club with an apartment tower feels like a gut punch. Petition drives have begun, and letter-writing efforts to the Seattle Landmark Preservation Board are being organized on social media. An online petition gathered thousands of signatures in the first few minutes.

Even King County Executive Dow Constantine, a former DJ in college, protested on Facebook: “Nope. No. Not having it. We’ve lost too much and we’re not letting them knock this sacred place down without a real, knock-down, drag-out fight.”

But the development’s approval will be subject to city codes and public protests have halted few projects this past decade. The Seattle Landmarks Preservation Board has only 450 “landmarks” designated in the entire city. That protection is currently afforded to 23 churches, nine street clocks, four social clubs (including the Seattle Yacht Club, the Washington Athletic Club and the Rainier Club, where Seattle’s wealthy gather) — but no music clubs. The Paramount and the Moore are protected, but even their status was partially a result of their architectural significance.

Most of the clubs that launched grunge already have been demolished in Belltown, South Lake Union and Capitol Hill. Nirvana played a dozen places in the ‘80s and only the Crocodile (Belltown), El Corazon (Eastlake) and the Central Tavern (Pioneer Square) survive as venues that book live music. For a while, I started to collect tiny pieces of venues that were getting demolished in Seattle, but soon the bricks and old wood facades from places like Astor Park, Parker’s Ballroom and the Music Hall took up too much room in my office. Eventually, even I threw those away. The memories and the sounds are what I keep now.

Some of this nostalgia happens to any generation and in any city with growth, but places like Paris and London protect large swathes of what was. Seattle’s landmark status has more often been applied for architectural uniqueness, which probably wouldn’t save the Triple Door, the Blue Moon or the Tractor Tavern. To me, and to many others, these venues are part of the cultural history of what Seattle is, and the type of brick facade they sport is less important than what happens inside.

I have long argued that it was the Seattle music scene that made the city an international hub and gave it the “coolness” that, in turn, attracted young tech workers. This isn’t just about music though: Seattle practically invented the idea of “alternative” culture in music, theater, coffee shops, and fashion. Seattle’s hipness has played a role in attracting more residents and making huge profits for a handful of technology firms, but those companies don’t, in turn, support the music scene. On the East Coast, mega-billionaires are expected to give to philanthropic causes, but in Seattle, the tech money created here is more likely to be spent on Teslas than to save dive clubs that created grunge.

Local government has been quick to fund sports stadiums with bonds and I still get irked that baseball player Edgar Martinez had only recently retired when a street was named after him. “Why wait?” said then-Seattle Mayor Greg Nickels of the 2004 announcement. In contrast, Jimi Hendrix, probably the most famous person who will ever be born in Seattle, who died back in 1970, still does not have a Seattle street named after him (a park was dedicated a few years ago). Seattle did establish an Office of Music and Film to advocate for the arts but our government economic support has been minimal compared to cities like Austin and Nashville. A 2016 study showed that the Seattle music industry generates $4.3 billion in economic output and employs 30,000. If those numbers had to do with building planes, local government would bend over backwards to find a way to keep them.

But dollars aside, there’s the larger question of what Seattle will even mean as a cultural concept? What happens to the future Jimis of Seattle if there is no Showbox, no Crocodile, no El Corazon? How much of Seattle should we save or should we develop the site of every single-story building in the city as long as there is economic demand? Does the Showbox deserve to be saved simply because Frank Sinatra once sang in the lobby or because the club still works perfectly as a living, breathing business where culture is created every night? Is there a price we pay in this city for development that edges out the arts and how can that be measured in dollars and cents? And can we do anything to stop it other than bitch?

I don’t know the definitive answers to these questions or how to make developers consider preserving our cultural spaces or how to protect all the movie theaters and music clubs that have been part of the Seattle I love and remember. But I do know that Seattle without music clubs or record stores or movie theaters or bookstores or single-story coffee shops is not a Seattle that future residents will fall in love with. And that breaks my heart.