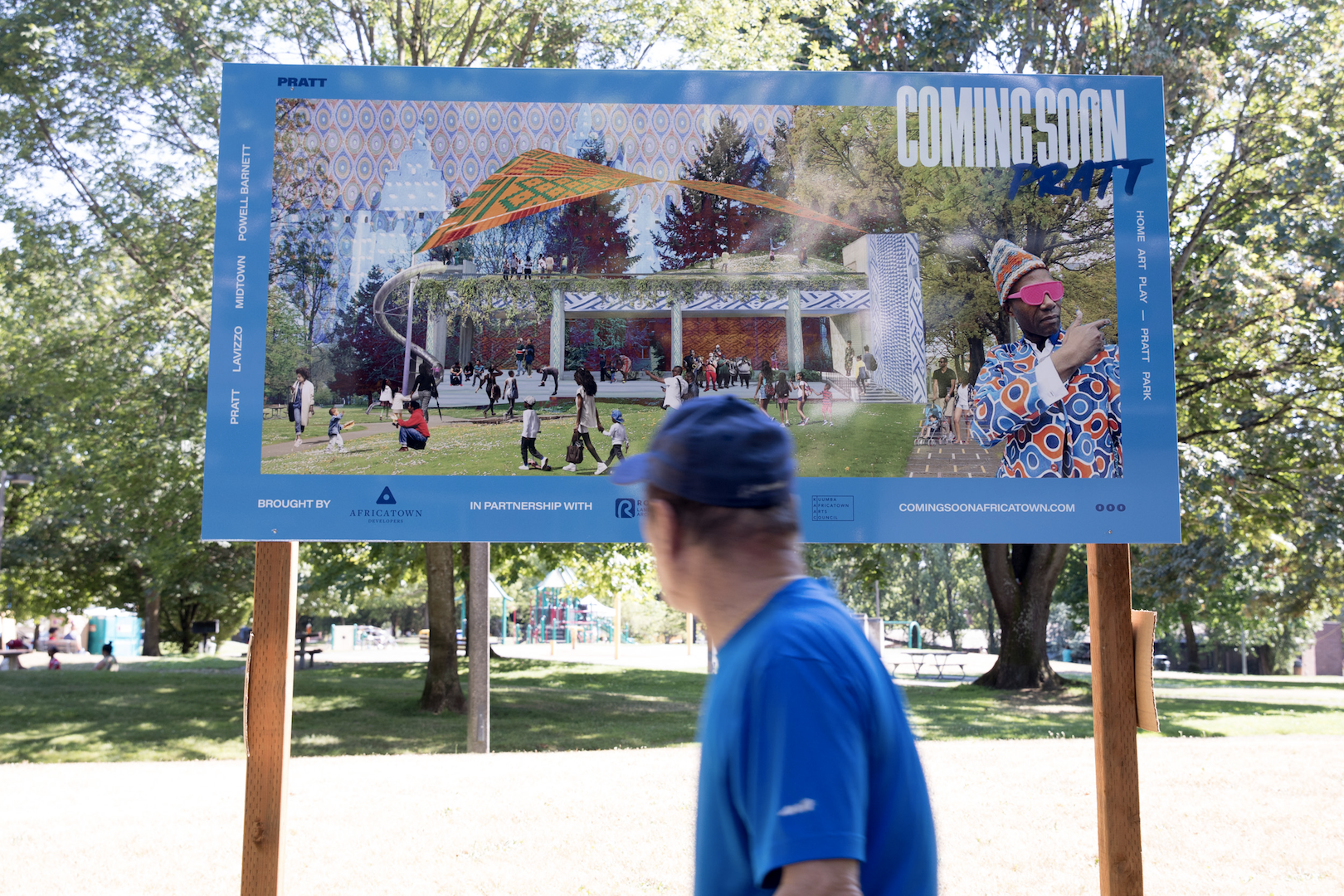 New “Coming Soon” signs posted in Central District parks (here, at Pratt) are meant to inspire conversation about the future of the neighborhood (Photo by Matt M. McKnight/Crosscut)

Last week, “Coming Soon” signs started popping up in several busy Central District parks. In size and shape, they resemble the “Proposed Land Use Action” notices that have sprouted like dandelions across the city. In ambition, they recall those airbrushed architectural renderings developers post to promote forthcoming high-rise condos and accompanying lifestyles. But closer inspection reveals the new signs as altogether unusual. These look like something out of Black Panther’s Wakanda — Afrofuturistic visions of a dream deferred.

The sign at Pratt Park shows a gathering space centered around an oversized concrete porch painted in diagonal blue lines. On the roof, an orange Kente-style fabric serves as a massive canopy below a sky patterned like the eyes of peacock feathers. In the background, pale towers recall the mud-brick Grand Mosque in Mali. But the people pictured are regular city folk, Black families traversing the wide lawn as a brass band plays on the steps.

“It’s basically a satire,” says Azzurra Cox, who, with Sara Zewde, Daniela Rosner, Aria Goodman and Selina Hunstiger created the captivating signs for Coming Soon. These collaborative installations at Pratt, Lavizzo and Powell Barnett parks (and soon, at Midtown Center) are part of the larger “Imagine Africatown” community effort to ensure that the massive development slated for the Central District and Midtown Center incorporates the history and insight of the African Americans who have long lived in the neighborhood.

“Those ‘coming soon’ signs are all over the CD,” Cox says. “We’re playing off that, playing with the trope by creating signs that are futuristic and fantastical. It’s an art project and a provocation that’s meant to inspire conversation and imagination. But it’s grounded in the reality of the intense change the neighborhood is going through.”

Inspiring conversation about that reality has been the main directive of several “design ciphers” facilitated by the Africatown Central District Preservation and Development Association. The events welcome community members into discussions about what the future CD will look like — including people with no background in design or architecture. “Design is often considered impossible for people who haven’t been professionally trained,” says Cox, a landscape architect. “But if you can imagine something, you are starting the design process.”

Over July 13-14, Imagine Africatown held its inaugural design weekend in partnership with Design in Public (a confab of Seattle architects and designers devoted to “supporting imagination, vision and participation in the creation of the place we all want to live.”) Held at Garfield High School, the event’s headliners were two architects hoping to shape and ensure the future of Black neighborhoods.

Walter Hood, professor of landscape architecture at the University of California, Berkeley, is working to preserve and improve Black neighborhoods across America by focusing on the “life ways” of Black communities. “I know the rhythms of my people,” Hood said. He emphasizes those rhythms in his urban designs, creating spaces for people who “like the shade,” who “congregate on the corner” and who “show the world in their front yards.” Instead of imposing new ideas of how a neighborhood “should” flow, he celebrates the seemingly mundane ways Black neighborhoods already work.

To find out, she founded the Community Planning and Design Initiative Africa, a clearinghouse for designers and architects interested in reflecting identities of the African diaspora. She also established a global architecture competition to explore how contemporary architecture would shift if designers “look to Africa for solutions to challenges of the built environment.”

The entries Okwumabua received were eye-opening and inspiring, from the use of rammed earth as a construction material to designs incorporating pyramids and Zulu shields to buildings resembling Ghanian stools, Egyptian headrests, musical gourds and West African masks.

But while the contest renderings succeed in sparking new ways of thinking, Okwumabua is eager to put ideas into action. “Pretty pictures are nice, but brick and mortar is better,” she said. “What if we saw streets with these buildings in our neighborhoods?”

It’s essentially the same prompt posed by the Coming Soon project. Collaborator Sara Zewde, a landscape designer and artist, notes that while they may look like Afrofuturistic fantasies, the signs incorporate community feedback gathered at previous Africatown events.

“We asked, ‘What would Africatown sound like, smell like, feel like?’” Zewde says. “People all said similar things — an open-air marketplace, color, play, music — but it was like a parallel universe that doesn’t exist.” Creating the signs was a way to say, “What if you could look at it?”