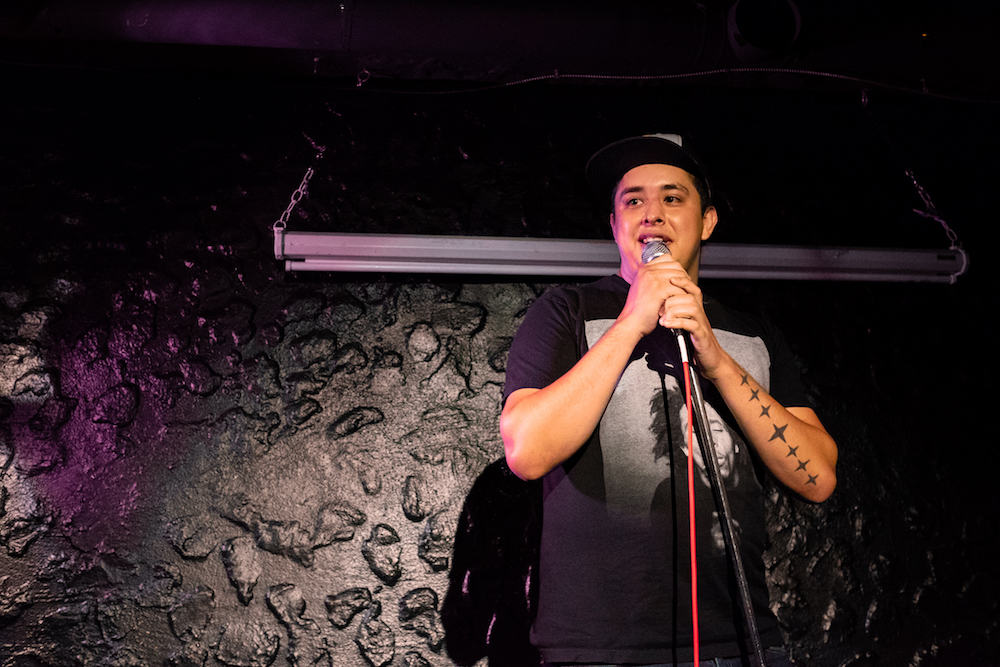 Pawnee comic Howie Echo-Hawk calls his comedy confrontational and antagonistic and many of his jokes focus on Native trauma and genocide. (Photo by Tristan Ahtone/High Country News)

Howie Echo-Hawk is halfway through his five-minute set at the Rendezvous bar in downtown Seattle. He has used the word “genocide” six times.

“This is a joke I keep telling because nobody laughs,” he tells the crowd.

The basement lounge he’s performing in has been dubbed “The Grotto,” and it feels like one. It’s cramped. The air is stale. The audience members, made up mostly of white people, shift in their seats.

One woman close to the stage lets out a laugh but quickly stifles it. Her friend turns her attention towards her phone, then her drink. Most comics would call this a bomb. On stage, Echo-Hawk is beaming.

A citizen of the Pawnee Nation of Oklahoma, Howie Echo-Hawk, 28, has been making people laugh all his life. But after the 2016 election, he was compelled to confront what he calls white liberal audiences with his “punishment comedy.” Set after set, he seeks to agitate and even irritate with jokes, stories and dispatches from life as an Indigenous man in America.

“It’s fun for me to see them squirm,” he says. “Because in mainstream colonizer-America, I’m pretty much constantly squirming, so to put that back on them for a couple of minutes is just fine for me.”

Echo-Hawk says he knows of maybe two Indigenous comics, including himself, who perform in Seattle – a scene dominated primarily by white comics. But he doesn’t think audiences should be surprised to Native people on an open-mic stage.

“It’s not an illusion, folks, this is another Indigenous comedian,” says Danny Littlejohn as he steps up to the mic. 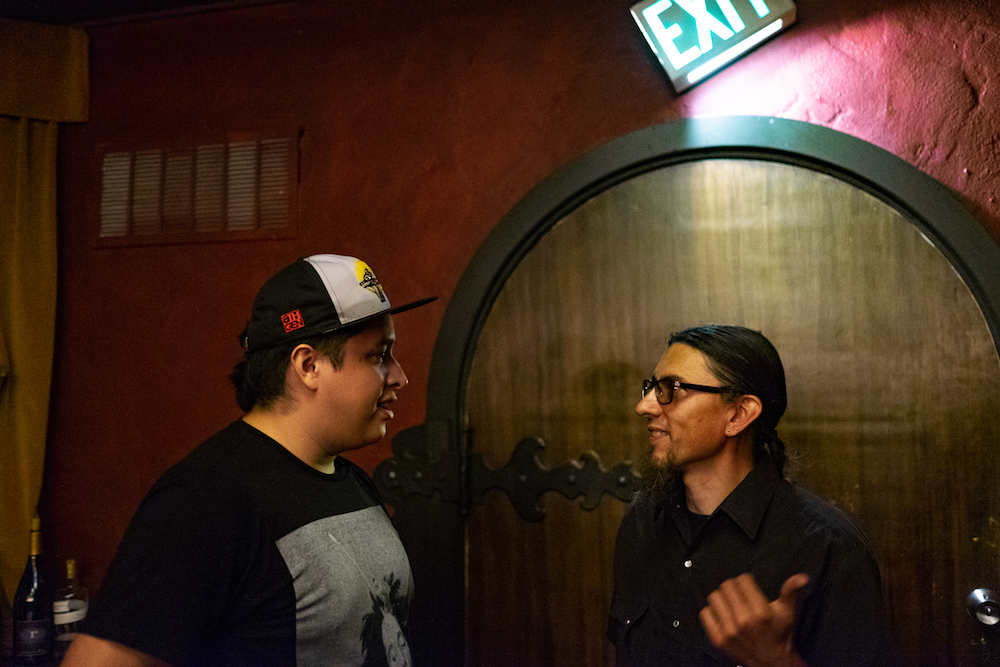 After the show, Echo-Hawk and Littlejohn workshop the joke.

“You should have said that we’re not brothers,” says Echo-Hawk. “They probably assume that we’re related.”

Indigenous communities boast vibrant storytelling traditions that use humor as a tool of teaching and resilience. Take, for example, the story of Maushop, the Wampanoag giant who created the islands currently known as Martha’s Vineyard and Nantucket by dumping his sandy moccasins out into the ocean. Or the Kiowa anti-hero Saynday who enlisted a cohort of plains animals to help him steal the sun.

Adrianne Chalepah is a Kiowa-Apache comic and part of a touring stand-up act called Ladies of Native Comedy. For her, telling jokes on stage is an inherently Kiowa act.

“That’s one of our favorite things to do,” Chalepah says. “We sit around and we crack each other up.”

She’s inspired by the stories women in her family told around the kitchen table, weaving in and out of English and Kiowa, when she was a little girl. She says those women could turn something tragic or somber into a cartoon — something to be laughed at and learned from.

“It can feel sometimes like our communities are in a constant state of mourning, like there aren’t enough tears to cry about every single tragedy,” Chalepah says. “Native humor is part of why we survived genocide. It’s allowing yourself to feel a little bit of joy in a moment that might otherwise break you.”

Chalepah’s material can be dark, like Echo-Hawk’s, but never as confronting or antagonistic. Still, she says, some non-Native audiences aren’t quite sure how to react. That uneasiness, she says, is a form of erasure. That’s why she likes Echo-Hawk’s delivery style.

“He’s using his talent to confront subjects like our genocide, what most Americans would otherwise be complicit to forget and deny,” Chalepah says.

Echo-Hawk says his relationship with comedy is complicated. It’s a release for him — a way to keep painful emotions and experiences from festering in his head. But it’s also a source of frustration. He says the role can be tokenizing and taxing. He’s only been at it for a year and a half, but he feels jaded already and says he thinks about leaving comedy.

“Being an urban Indian comedian is rough,” Littlejohn says. “So I’m with Howie on that.”

Tonight, though, he and Echo-Hawk say they feel inspired by each other’s sets.

“I would have killed to see a Native comedian on TV as a kid. I would’ve loved that,” Echo-Hawk says. “I don’t know if I’m gonna get there, I don’t even know if I wanna get there. But the idea that I could make that happen for somebody is great.”


This story was produced in partnership with NextGen Radio.

Savannah Maher is a public radio reporter, and producer and a citizen of the Mashpee Wampanoag Tribal Nation.