The number of homeless veterans is down. What’s working? 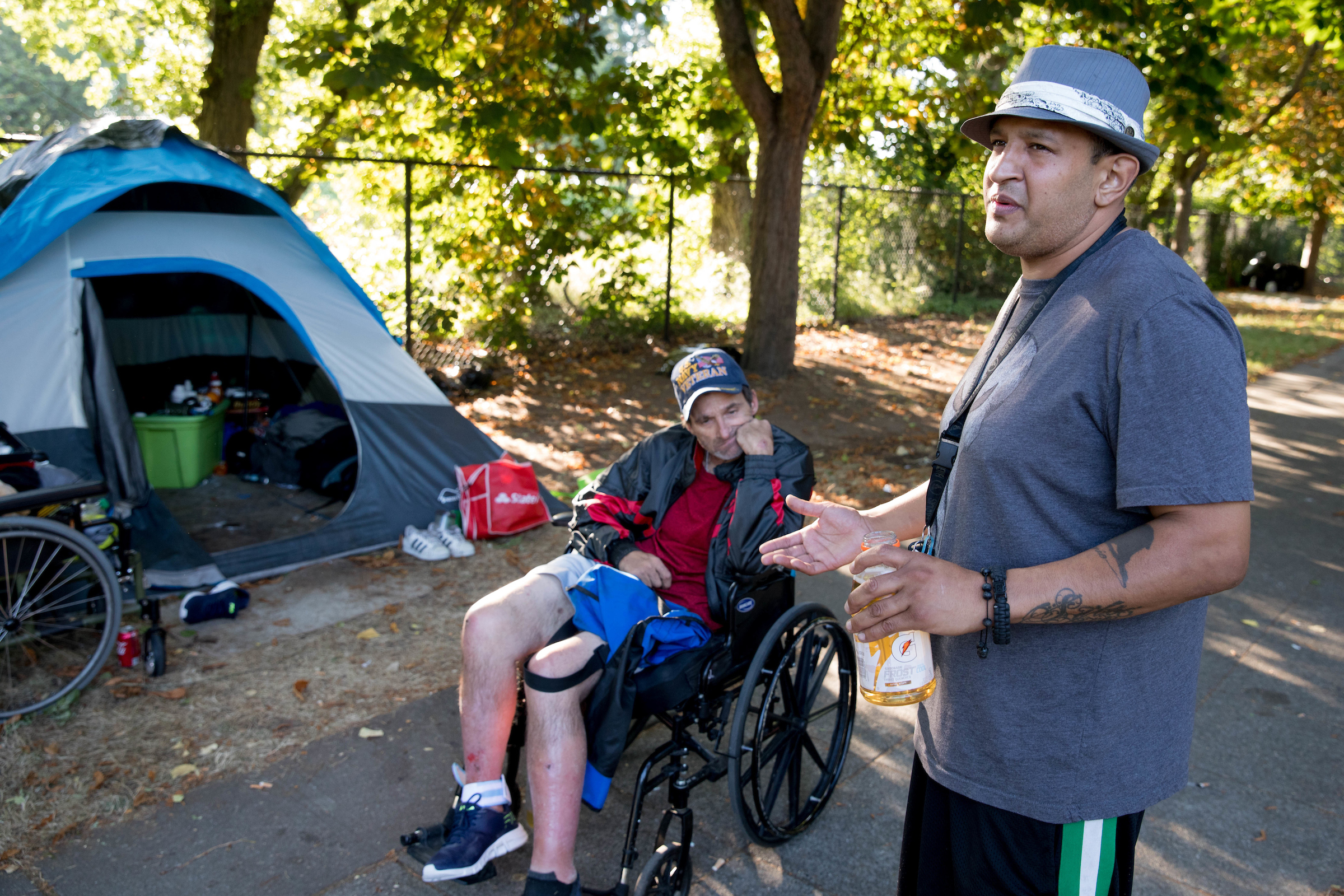 Richard Alvarado talks with former U.S. Navy diver Michael Mikesell in a parking lot where both of them sleep, near the Veterans Administration in Seattle's Beacon Hill neighborhood, July 17, 2018. (Photo by Matt M. McKnight/Crosscut)

But within that troubling statistic was something positive: The number of veterans experiencing homelessness in the county actually decreased, by 31 percent, from about 1,300 in 2017 to 929 in 2018.

As the pressure to alleviate homelessness in the region increases, solutions with demonstrable results have been hard to come by. The nationwide success of those working with this particular population, then, provides a glimmer of hope that progress is possible and a potential roadmap for the city as it moves forward.

On a recent morning near the Veteran’s Affairs hospital in Seattle’s Beacon Hill neighborhood, Richard Alvarado climbed from his truck, where he had slept through the night. Moments later he was talking to Monique Brown, who was making the rounds through the parking lot where scores of people had spent the night in their vehicles.

As the founder of Forward Operating Base Hope, Brown does outreach to homeless veterans. Among other things, she helps people enter their names into a database. Famed among service providers for its specificity and individual focus, the database — known as the Vulnerability Index - Service Prioritization Decision Assistance Tool (VI-SPDAT) — helps connect homeless veterans to services and housing. “It puts me on a thing to let them know I’m really struggling,” says Alvarado.

Alvarado had a wife and a family once, he says. But while driving a John Deere tractor on Joint Base Lewis McChord, he fell, ravaging his leg, which is now a patchwork of skin grafts and scars. Eight surgeries later, he could no longer work and his benefits couldn’t keep up with the rent. Now without a job or a permanent home, Alvarado becomes emotional when talking about what he lost. “I’ve been to the top and now I’m at the bottom,” he says.

Service providers point to two things that differentiates the responses to veteran homelessness and other demographics: sustained federal and local dollars, and this list, which ranks clients by need and helps service providers for homeless veterans at every level coordinate with one another. Providers across the region meet every week, combing through the database, discussing individual cases, looking for openings and gaps in the system.

“The reason why veterans homelessness is reaping dividends now, despite having this crazy housing market, despite having very limited access and utilization of health care, is because we got together and did the by-name list,” says Ryan Mielcarek, Director of Strategic Initiatives with Compass Housing Alliance.

“Knowing who is homeless and knowing what resources we have, helps us to better identify existing gaps in the system to both quantify and qualify what areas of need there are,” says Kip Swanson, program manager at Supportive Services for Veteran Families. “It’s not just a bunch of siloed programs,” he adds.

Key to making that list work, according to the service providers that currently use it, are resources. Support for homeless veterans has consistently had bipartisan support and so funding has been steady, coming from the U.S. Department of Veterans Affairs, the Washington State Dept. of Veterans Affairs, and King County’s Veterans, Seniors and Human Services Levy, as well as various charities and private investment.

One of the most important assets is the “golden ticket,” as Mielcarek calls it: the Veterans Affairs Supportive Housing voucher. VASH vouchers act like Section 8, but as part of a partnership between the Department of Housing and Urban Development and the VA, it’s targeted toward veterans. Director of the VA’s Community Housing and Outreach Services Meghan Deal says that, while VASH vouchers are not available to everyone who needs them, they “are generally more available than mainstream Section 8 vouchers.”

For Ben Bourg, 34, it was this “golden ticket” that finally got him and his wife into stable housing. After extended tours in Iraq and Afghanistan, Bourg returned home with severe PTSD, which was misdiagnosed as bipolar disorder. He says he feels extreme anxiety around other people and is quick to lash out, qualities that made it hard for him to hold a job.

While living in Forks, he and his wife became homeless, eventually moving to Kirkland in hopes of connecting with more resources. They received a Section 8 voucher and found a place to live, but left after clashing with the landlord. Back on the market, they had trouble finding a new place and the voucher expired before they could use it.

In and out of housing, Bourg and his wife lived on the streets and in a tent before connecting with the Department of Veterans Affairs office in Renton. The department found him a “project-based” VASH voucher, meaning he could use it in a housing facility specifically for homeless veterans. “That was what I needed was a place where I could get help,” he says while sitting at his kitchen table, the balcony door open to the street below. Surrounded by other veterans and case managers, Bourg says he feels he can finally work on his mental state in a way he never could without housing. He says he hopes to eventually design and sell apps.

Evan Mack, the Program Manager at Compass Veterans Center in Renton, says that as the number of homeless veterans decreases, the remaining cases are the more complicated ones, which  require more wraparound services. He believes the success of his and other programs will continue, but that they will need to be more “creative.”

The severe lack of affordable housing is an obstacle to getting that number of homeless veterans down to zero. But Mack still sees the approach to veteran homelessness as an example to be followed. “This model could be successful for the general population if we just funded it the same way and set up the systems the same way.” He adds, “I feel bad for my partners that are not working with veterans because they just don't have as many resources to turn to.”

The stories published here for the Seattle Day of Homelessness are a collaboration by four newsrooms – Crosscut/KCTS 9, KUOW, Seattlepi.com and The Seattle Times – to spotlight the regional homelessness crisis. The newsrooms shared data but reported stories independently. To see the coverage, visit all of our websites, follow #seahomeless on Twitter and pick up a Sunday copy of The Seattle Times.