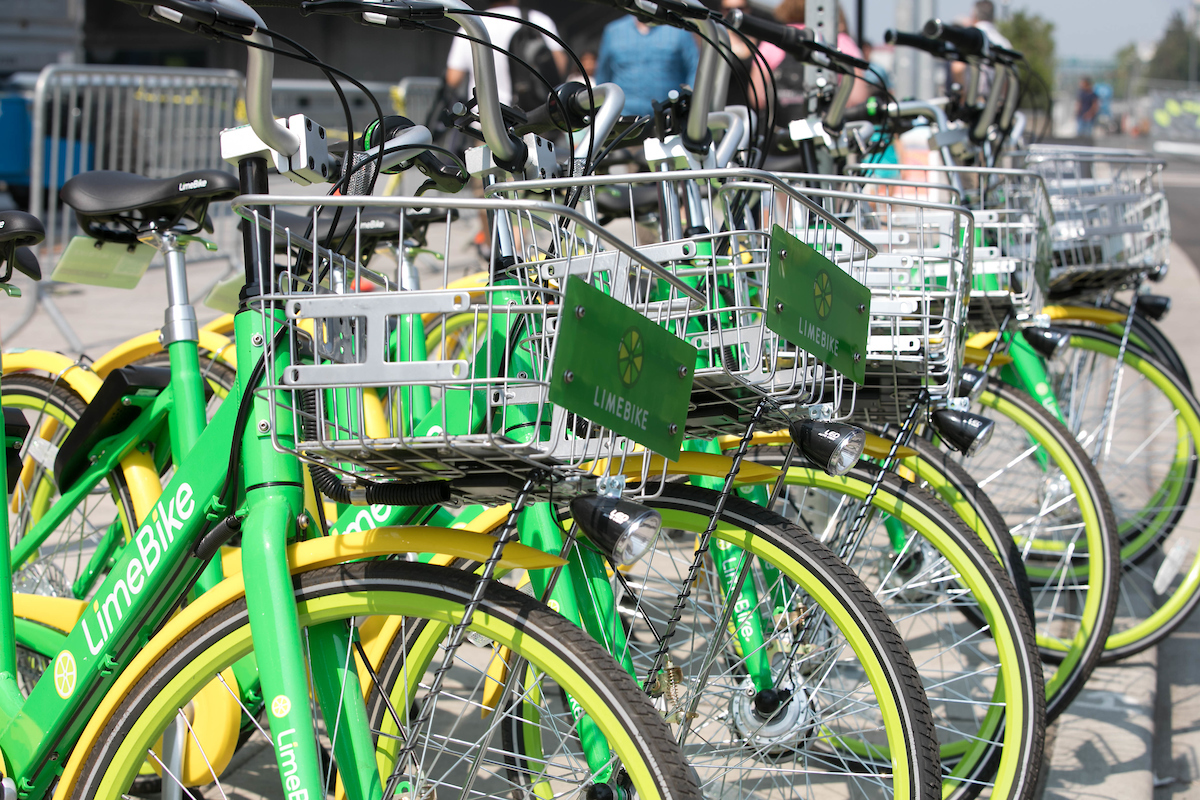 The Seattle Department of Transportation (SDOT) is rolling out new, more stringent regulations and an increased $250,000 permit fee. The agency is offering four permits for private companies to bid on — likely Lime, Spin, Ofo and Uber’s Jump, though they said they’ll award the permits to whichever companies have the best proposal — and each company could have up to 5,000 bikes.

The agency wants to ensure low-income communities and communities of color can benefit from bike share as much as wealthier, whiter neighborhoods do. The city is also working to launch an adaptive cycles pilot program for people with disabilities who cannot ride traditional two-wheeled bikes. As for parking, unless you’ve stayed at home for the past year, you’ve surely come across a bike-share bike in the middle of the sidewalk or blocking the curb ramp. SDOT hopes a revamped, more punitive enforcement program will help.

The citrus rainbow of dockless bike share bikes have become so ubiquitous on Seattle’s streets, it’s easy to forget they were just introduced a year ago. With that first anniversary comes the end of the dockless bike share pilot period. The city used the pilot as a way to work out the kinks on regulations, collect data on who’s riding bike share and where they’re riding, and generally figure out if private bike share made sense for Seattle.

It’s hard to isolate the impact dockless bike share has had on the overall increase in bicycling in Seattle. But in its first 11 months of operation in the city, people took 1.4 million dockless bike share rides. SDOT says that heavy bike share use has had an impact on the downtown Second Avenue bike lane, where weekday daily ridership was up 38 percent in the first three months of 2018 over the same period the previous year.

“Bike share is fantastic,” said Cascade Bike Club senior policy director Blake Trask. “It removes the barriers and hassles of thinking about getting a bike. We’re seeing new people we wouldn’t have expected to see on bikes and it's growing ridership.”

Bike share providers have long grappled with the problem of inequitable access to the systems. Because the docks for Seattle's old, under-achieving Pronto bike share system were primarily located downtown, they mostly served white, downtown workers. When Lime, Spin and Ofo launched last year, they did so with bikes across the city. In addition, Lime and Spin offer cash-payment options at some retail locations that allow people to use dockless bike share if they don’t have a smartphone. At least to a casual observer, it’s easy to see dockless bike share is reaching a much more racially diverse swath of Seattle than Pronto ever did.

SDOT’s pilot program evaluation shows that people are taking rides nearly everywhere in Seattle. It was in part because the pilot required that at least 20 percent of the areas in which the companies operated be some of the most disadvantaged parts of Seattle, defined as Tier 1 equity areas by the city. They are mostly low-income communities and communities of color such as South Park, Delridge, White Center and Rainier Beach. But, ridership was still heaviest in the center city and north of the ship canal, so SDOT is tweaking its regulations to get the companies to do more.

“We want to see equitable access to bike share no matter what neighborhood you’re in,” said SDOT Bike Share Program Manager Joel Miller. “We saw less ridership and less bikes in the far north and far south parts of the city. If you’re getting off the train at Othello Station, there’s not a good chance there’s a bike there, especially compared to Capitol Hill or University of Washington.”

The details are still being worked out, but the new regulations will require a certain percentage of each company's fleet be placed in Tier 1 and 2 areas, which SDOT based on the city’s displacement risk map and Access to Opportunity Index. As Seattle Bike Blog recently reported, Seattle’s approach is similar to that adopted by St. Louis, where dockless bike share launched in April. Advocates in St. Louis say the regulations appear to be working to help bike share reach low-income communities and communities of color. But as often is the case with tech-based transportation companies, it will be hard to know definitively without good data.

"The social equity and inclusion zones are necessary for an equitable bike share system,” said Grace Kyung, special projects director with St. Louis-based TrailNet. “There are opportunities for cities to work with public and private companies for better accountability and transparency in who is using the bikes and ensuring it serves those that need it the most."

For people who can't physically operate the existing bikes, Miller said, SDOT hopes to launch a pilot program in partnership with Seattle’s Outdoors for All. The nonprofit has a large fleet of adaptive cycles such as tricycles, side-by-side tandems, and hand cycles that people unable to ride a traditional two-wheeled bicycle can ride. The pilot program likely wouldn’t mirror dockless bike sharing’s model, but SDOT wants to help increase people’s access to the adaptive bikes. Portland was the first city to experiment with adaptive cycle rentals as part of its bike share program.

In addition to equity, SDOT is hoping the new regulations are a fix for their dockless bike parking woes — without question, one of the major complaints leveled against the bike share companies. The pilot evaluation found 70 to 80 percent of bikes were parked correctly. But 20 to 30 percent of poorly parked bikes translates to 2,000 to 3,000 bikes in the way. SDOT has two new approaches to parking.

The first is switching from their current complaint-based system to a “health inspector” approach. During the pilot, parking problems were only addressed if someone submitted a complaint to the companies. The companies then had two hours to move the problem bike. Even if the companies responded within two hours, Miller pointed out that doesn’t do much for the people submitting a complaint. “If you were in a wheelchair and a bike was blocking your access to curb ramp, that’s not acceptable.”

Under the new system, SDOT will hire third-party auditors to do surprise compliance inspections. Miller said, if companies don’t have the “vast majority of their bikes parked correctly” they’ll be punished, most likely with a reduction in their permitted fleet size. The specific target for correctly parked bikes hasn't been determined.

To encourage people to park their bikes correctly in the first place, SDOT is expanding its bike share parking pilot program. The agency painted five bike-share parking corrals on street corners and extra-wide sidewalks in Ballard. Miller said, “We did see that parking on those blocks seemed to be better organized with less bikes blocking sidewalks. But it’s too small a pilot to really extrapolate data.”

SDOT is in the process of finalizing its new regulations. The city council also needs to approve the new $250,000 permit fee SDOT wants to implement, which is likely to happen on July 30. At a July 17 council committee meeting, Ofo Seattle General Manager Lina Feng said her company has concerns about the fee increase. “It’s a 300 percent fee increase. We know that at a dollar an hour, [non-electric] pedal bikes are the most equitable form of access. The fee structure is a threat to that.”

Ofo recently announced massive layoffs of its North American staff, but Quartz reports they plan to maintain operations in Seattle.

Hambley said, “Having added power makes the experience of riding the bike more utilitarian. If we’re hoping to transition as many single occupancy vehicle trips as possible to bike share, having a bike that you can get around on easily makes it more likely that will happen.”

Miller said SDOT currently has no plans to increase the top speed allowed for electric assist bike share. Pedestrian advocates worry that the city's allowing of bikes on sidewalks will present special safety problems with an increase in electric assist bikes, especially in the more crowded parts of Seattle.

If all goes well, SDOT hopes to have everything ready for four bike share companies to bring their 20,000 bikes to Seattle by the end of August.

Updated on July 20 at 2:08 p.m. to clarify the difference between e-bikes' top speed and maximum assisted speed and correct details of SDOT's equity plan.