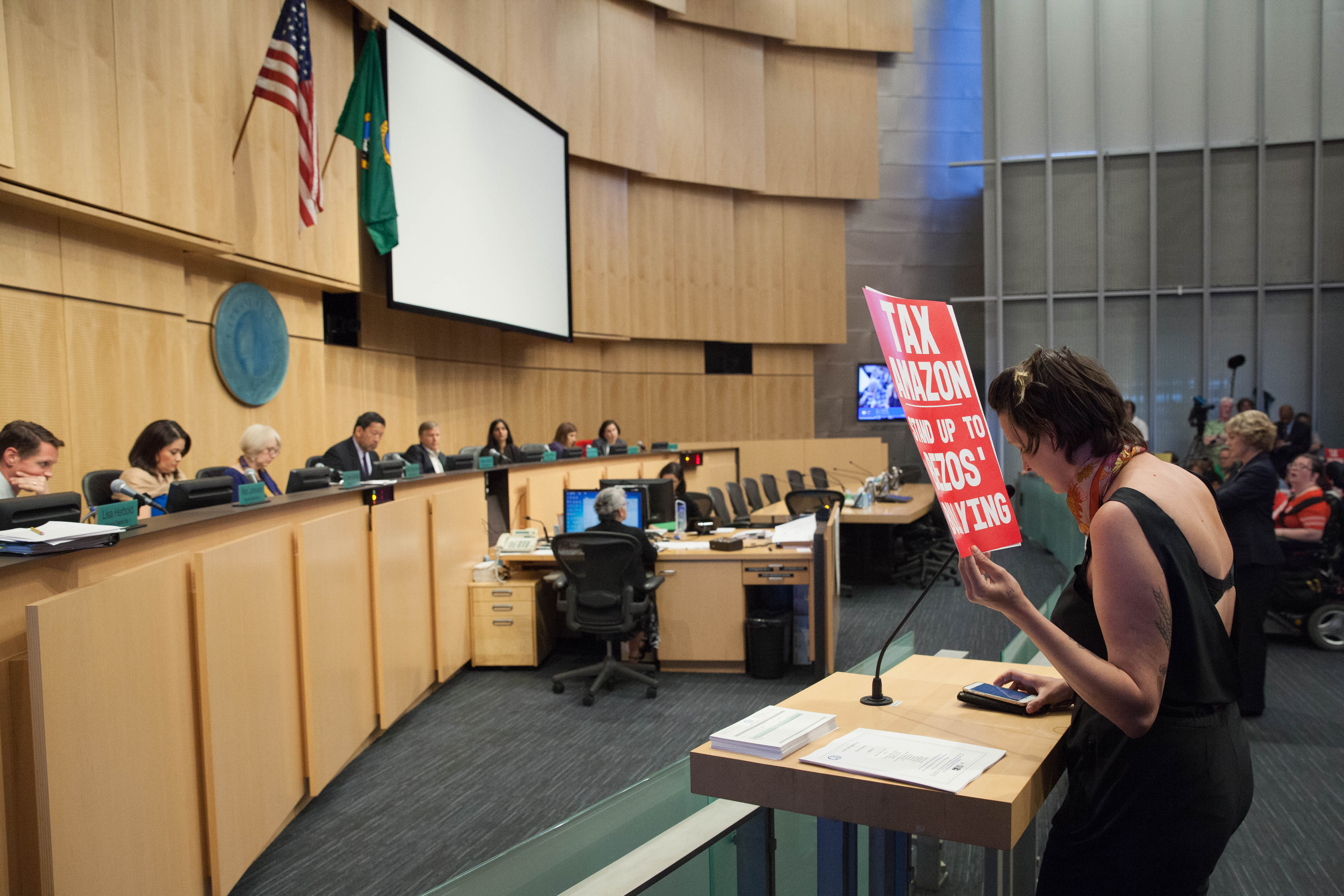 Housing advocates during a vote by Seattle City Council at City Hall in Seattle, May 14, 2018. (Matt M. McKnight/Crosscut)

The Seattle City Council is facing a second lawsuit over an alleged violation of the Open Public Meetings Act, this time from a man who has been described over the decades as a public records “gadfly.”

As with a similar lawsuit filed around the same time in mid-June, the suit from Arthur West accuses the council of determining its decision to repeal the controversial employee head tax behind closed doors. Under Washington State law, it is illegal for a quorum of elected officials to deliberate out of the public eye.

That law likely applies even when the elected officials do not necessarily meet all at the same time, according to open government advocates, and may still be a violation if one council member acts as a conduit between his or her colleagues.

West also accuses council members of not giving the public the required 24-hour notice of the meeting in question. The notice went out to the city’s email listserv at 12:09 PM Monday for a noon Tuesday meeting.

"My motivation is essentially apolitical," West said in an email. "I read the article about their special meeting and it looked like they violated the law. This is not the first time city officials have cut corners to promote their pet causes."

City Attorney Pete Holmes said in a statement he does not believe the city acted inappropriately.

The lawsuit names the Seattle City Council and the City of Seattle, as well as eight of the nine individual council members. It inexplicably excludes Councilmember Lorena González, who was one of the seven members who voted to repeal the tax. West claims that the violations were done “knowingly and deliberately.” According to the suit, the violations “created an uncertainty in the conduct of public officers.”

West’s initial complaint was filed on June 14, two days after the council repealed a highly controversial tax on large businesses to fund housing and the city's response to homelessness. After passing the $275 per employee tax unanimously, the council repealed it a month later in the face of a citizens' referendum.

However, in an email, Dan Nolte, spokesperson for the Seattle City Attorney’s Office, said they had not received word of the complaint until Monday and have not yet been formally served. “We’re reviewing the complaint and considering our options,” he said.

The other lawsuit was brought by high-profile attorneys Julie Kays and Lincoln Beauregard, both of whom were heavily involved in the sexual abuse allegations against former Mayor Ed Murray. Over the weekend, City Attorney Pete Holmes offered to settle that public meetings suit for $4,001, or $500 per alleged violation, according to the Seattle Times.

“We believe that one of the wrinkles to this is that the city council members should have to pay their individual fines” rather than the city paying on their behalf, said Beauregard.

Unlike the lawsuit from Egan and Beauregard, West’s claim seeks to invalidate the council’s vote on the measure, forcing them to vote again. Additionally, he also calls for each council member to pay a $500 fee. But he said he'd be satisfied with the city simply admitting it screwed up, something it declined to do in its offer to Beauregard.

As basis for the claim, West cites media reports that he says show the council conducting "serial communications" in violation of the meetings act. The day before the vote, Mayor Jenny Durkan and seven council members issued a statement all but declaring the tax repealed as an effort to avoid a "prolonged and expensive" political fight fending off the citizens' referendum.

In contrast to the legal firepower of Egan’s case, West is representing himself. He’s had luck on this front before. In 2015, the Washington Liquor Control Board paid him $192,000 after he accused the board of violating the open meeting law while it worked on rules for marijuana regulation, the AP reported. A Thurston County judge agreed.

He also claims to have collected $187,000 from the Port of Olympia to settle open meeting lawsuits, according to the AP.

In 2008, he sued the Association of Washington Cities for withholding records.

A spokesperson with the Seattle City Council did not immediately respond to a request for comment. A trial is set for July 2019, if it’s allowed to go that far.

This story has been updated with comments from Arthur West.