The Odessa Brown Children’s Clinic is scheduled to break ground next year for a second location at the Othello light rail station. 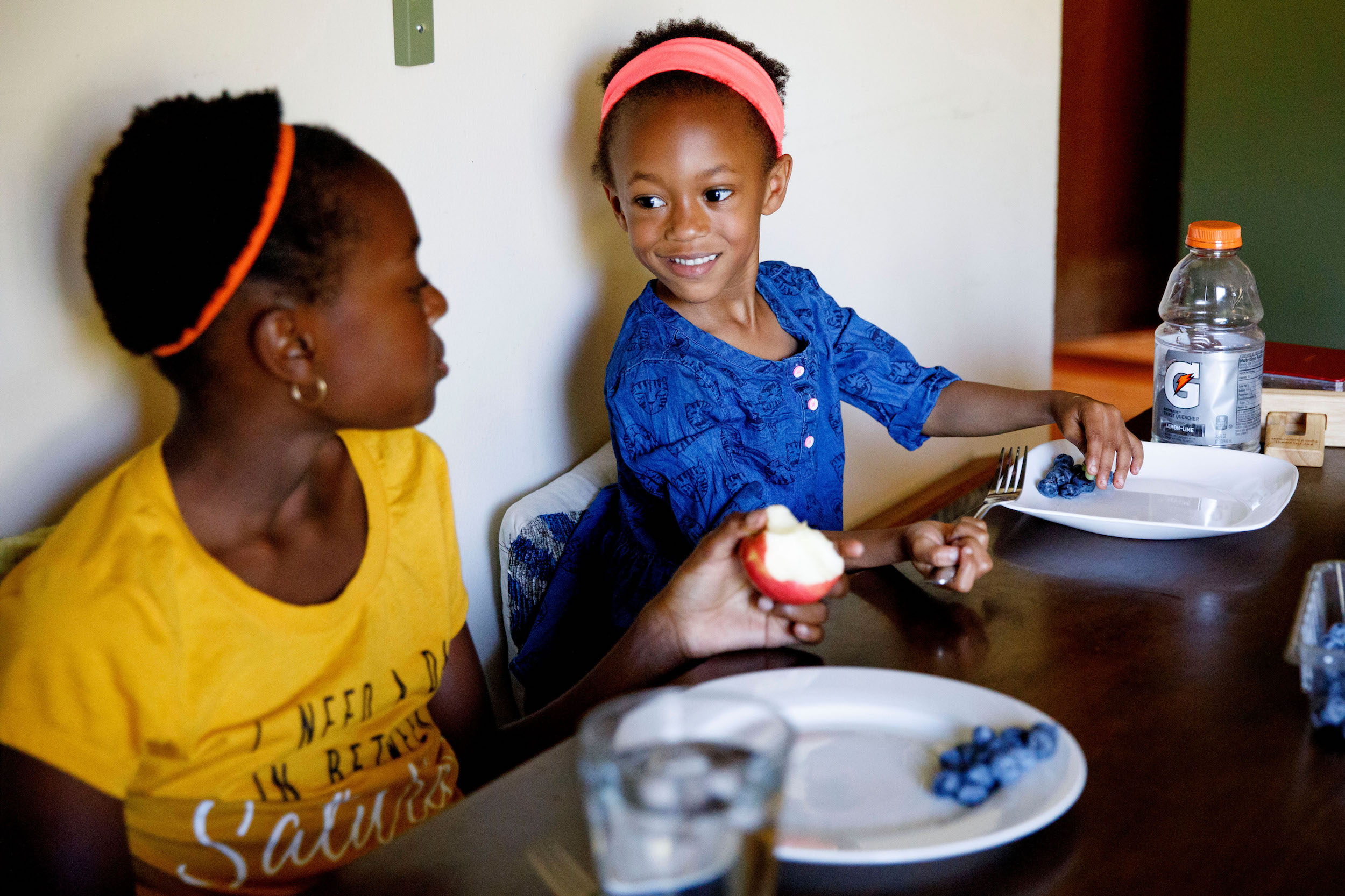 Zion Davison, 10, left, and Trinity Davison, 5, right, eat lunch at their home in Seattle. Davison's three children, two of whom have sickle cell, have been longtime patients of the Odessa Brown Children's Clinic in the Central District. (Photo by Sarah Hoffman/Crosscut)

When the Odessa Brown Children’s Clinic was built in 1970, it sat in the middle of a Central District that was 73 percent Black. The Seattle neighborhood had flourished in spite of racist redlining; longtime residents viewed the neighborhood with pride back then — and with nostalgia now.

The Central District’s Black population has thinned to the edges of King County over the decades and while the clinic still mostly serves communities of color, its patients no longer easily walk-in for appointments. Clients instead commute in from south Seattle, Fife, Federal Way, Kent, Renton.

Traffic is slow and busses are inconsistent and so more families have begun to arrive late or miss appointments altogether. The qualities that made Odessa Brown work — the constant communication, its touchpoint as a community center — have been fading.

“Where before we were centrally located…we’re suddenly more of a destination that families need to work harder to get to,” says Dr. Ben Danielson, the clinic’s medical director.

And so, as 75 percent of Odessa Brown’s patients have moved south, often pushed that way by increased housing prices, the clinic will now follow. Construction on a sister location — five miles south of the original clinic — will begin next year, on a lot across from the Othello light rail station.

Funded through private donors and Seattle Children’s “It Starts With Yes” campaign, this second Odessa Brown facility will be more than just a clinic — it will have community space, resources for parents, mental health services, a dentist, nutrition services, a school.

And it will have housing — 176 affordable units as a part of a partnership with developers to create Othello Square — an effort to slow the movement of its clientele even farther south. “We’re focusing on allowing mixed and low-income families to really remain in that neighborhood,” says Danielson.

Foxy Davison knows well the importance of having access to the Odessa Brown clinic.

Once, on a drive home from St. Louis, her then 3-year-old son Judah began to feel the pain that arrives when his round blood cells turn sickle-shaped. (He, as well as another sibling, suffers from sickle cell anemia). The family stopped at a hospital in Wyoming where the doctor began to lecture Brown about how children can die from sickle cell around age 4 and recommended a blood transfusion that could take days.

In reality, Judah just needed to get to lower elevation, she later learned.

Sickle cell disproportionately affects people like Davison — people of African descent. Where most people have wobbly cell walls, cells affected by sickle cell anemia can become rigid under stress. Pain can be so intense hospitals will use morphine to combat it.

It was after Judah and daughter Trinity were diagnosed that Davison confronted how race can impact her family’s medical treatment. At a larger hospital, says Davison, picking up a prescription for sickle cell pain medication can be “met with sort of more skepticism, a reticence to give the meds that you might actually need.”

“One of the doctors who's at Odessa, he always talks about the lack of funding and research [of the disease] and you’re like, ‘What is it? Why can’t we see progress on this issue?’” says Davison, sitting in her home in southwest Seattle. “He's a White man and he just said,’ It affects the wrong people.’ And I remember tears when I heard that because it was the one time where race just stabbed me in my gut. Because you're talking about my kids and you're just telling me that because they don't look a certain way that they can't get answers to their condition.” 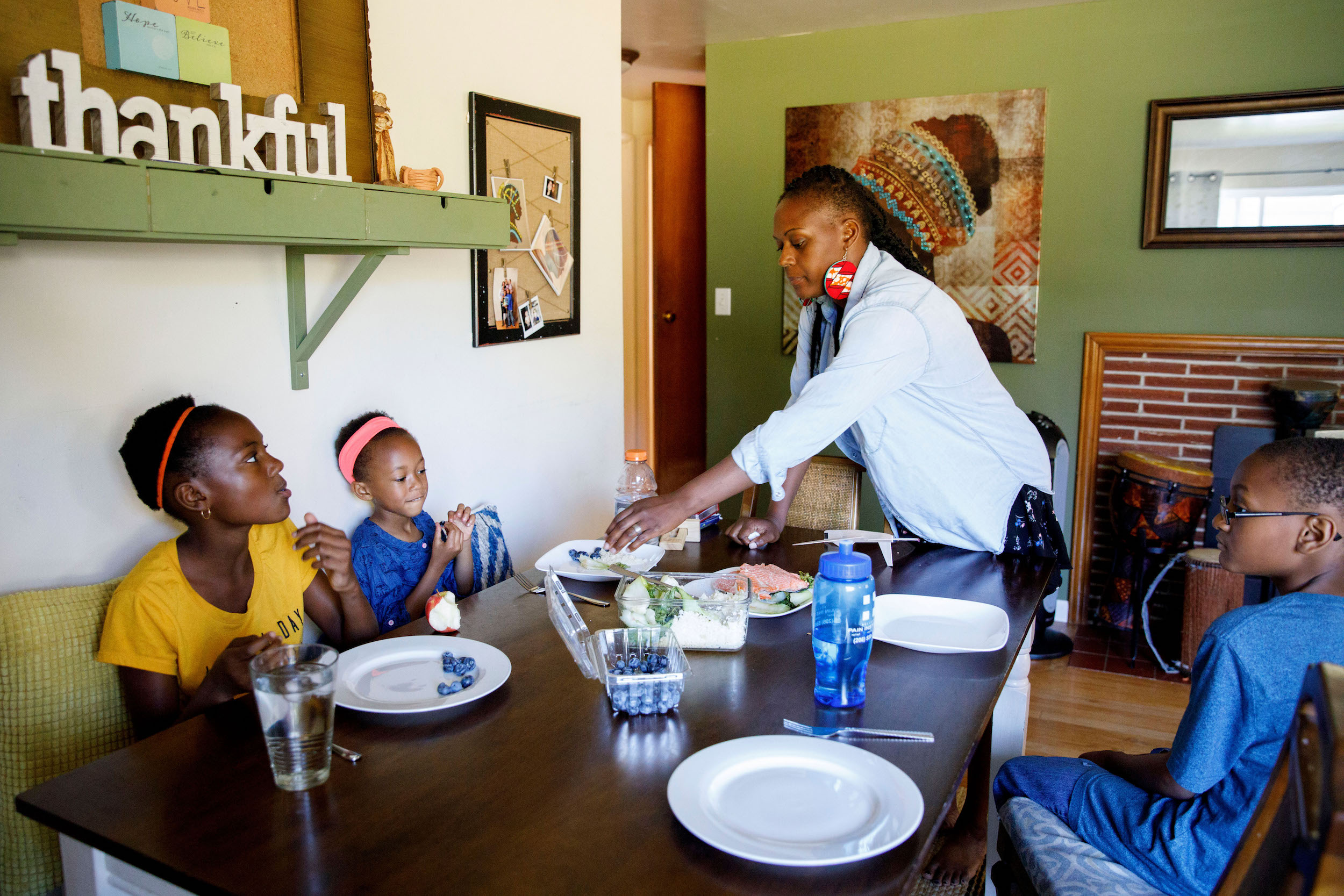 Zion Davison, 10, left, Trinity Davison, second from left, Foxy Davison, center, and Judah Davison, 12, right at their home in Seattle, WA. What used to be a four-block walk to Odessa Brown Children's Clinic is now a 30-minute car commute since the family has moved from the Central District to southwest Seattle. (Photo by Sarah Hoffman/Crosscut)

Zion Davison, 10, left, Trinity Davison, second from left, Foxy Davison, center, and Judah Davison, 12, right at their home in Seattle, WA. What used to be a four-block walk to Odessa Brown Children's Clinic is now a 30-minute car commute since the family has moved from the Central District to southwest Seattle. (Photo by Sarah Hoffman/Crosscut)

The Odessa Brown clinic was always meant to offer a place where families of color and low-income patients could feel comfortable. Funded by the Model Cities program in the 1960s — part of President Lyndon Johnson’s post-war “Great Society” — the community at the time wanted a place that “felt contextually relevant from a cultures, values and feel standpoint,” Danielson says. It “really felt like home to them.”

The promise of a community clinic

With the exodus of Seattle’s African American community, so goes the promise of a community clinic. Read our previous story.

The clinic is located on Yesler Way at 21st Avenue South, in the dip between two hills. An arched entryway greets patients as they arrive to the front desk. Exposed beams give the place a campy feel, like a cabin. There’s little space to wait, but what space there is has a small play area for children.

The clinic’s namesake never saw the building open. As Odessa Brown campaigned for its construction, she was dying of leukemia, hiding her sickness from those around her. The African American mother, beautician and community organizer spent her life feeling degraded at the doctor and wanted a medical clinic that would provide the opposite.

Talk to Odessa Brown patients and you’ll hear that’s true. “My kids feel a little bit more comfortable because Dr. Danielson looks like them,” says Davison. “When you go to check in the folks are like, ‘Hey, how's it going?’ It's just a different feel.”

Opening a medical clinic in the heart of the Central District allowed it to provide services in an atypical way. It hosted group visits, so families in the neighborhood could meet one another and form friendships. It connected with teachers and principals at nearby Bailey Gatzert Elementary, Washington Middle and Garfield High schools so students’ needs could be addressed. Some clinic staff would even give out their personal contact information.

But as its client base dissipated, the clinic was forced to become more and more patient.

“We have to restructure care models to not punish people for being a little bit late,” Danielson says. “We’ve noticed that it calls on us even more to try to get more done in each visit. We’ve also seen families coming through the doors a little more stressed and haggard.”

After decades living in the Central District, a neighborhood Davison and her family loved, they became a statistic: a Black family priced out and forced to leave, one less family in a neighborhood whose total Black population is approaching just 10 percent. Foxy Davison, husband Jason and their three kids moved to the southwest part of Seattle, near White Center. What had once been a four block walk to Odessa Brown became an almost half-hour drive, without traffic.

“I wonder if in some ways it's shifted to be more like how I visit [Seattle] Children’s [Hospital],” she says. “It's like, ‘I gotta get in and get these appointments and I gotta get outta here. I gotta get back here before traffic gets bad.’ So my priorities are different than when I could walk four blocks.”

The new clinic will be 35,000 square feet and serve twice as many patients (Odessa Brown served 24,000 people last year). A spokesperson for Seattle Children’s, which is Odessa Brown’s umbrella organization, said they estimate the total cost of land and construction will exceed $40 million. Groundbreaking is in 2019, with an undetermined opening date. It’s unclear what the new name will be, but for now, it’s simply being called OBCC-Othello.

As the crow flies, the new clinic will be closer to where the Davisons live now. She says they may start using it when it’s completed.

But at the same time, there’s a tug back to the original, where Davison and her family has spent so much time. Convenience or familiarity? “We’ll probably be in between.”