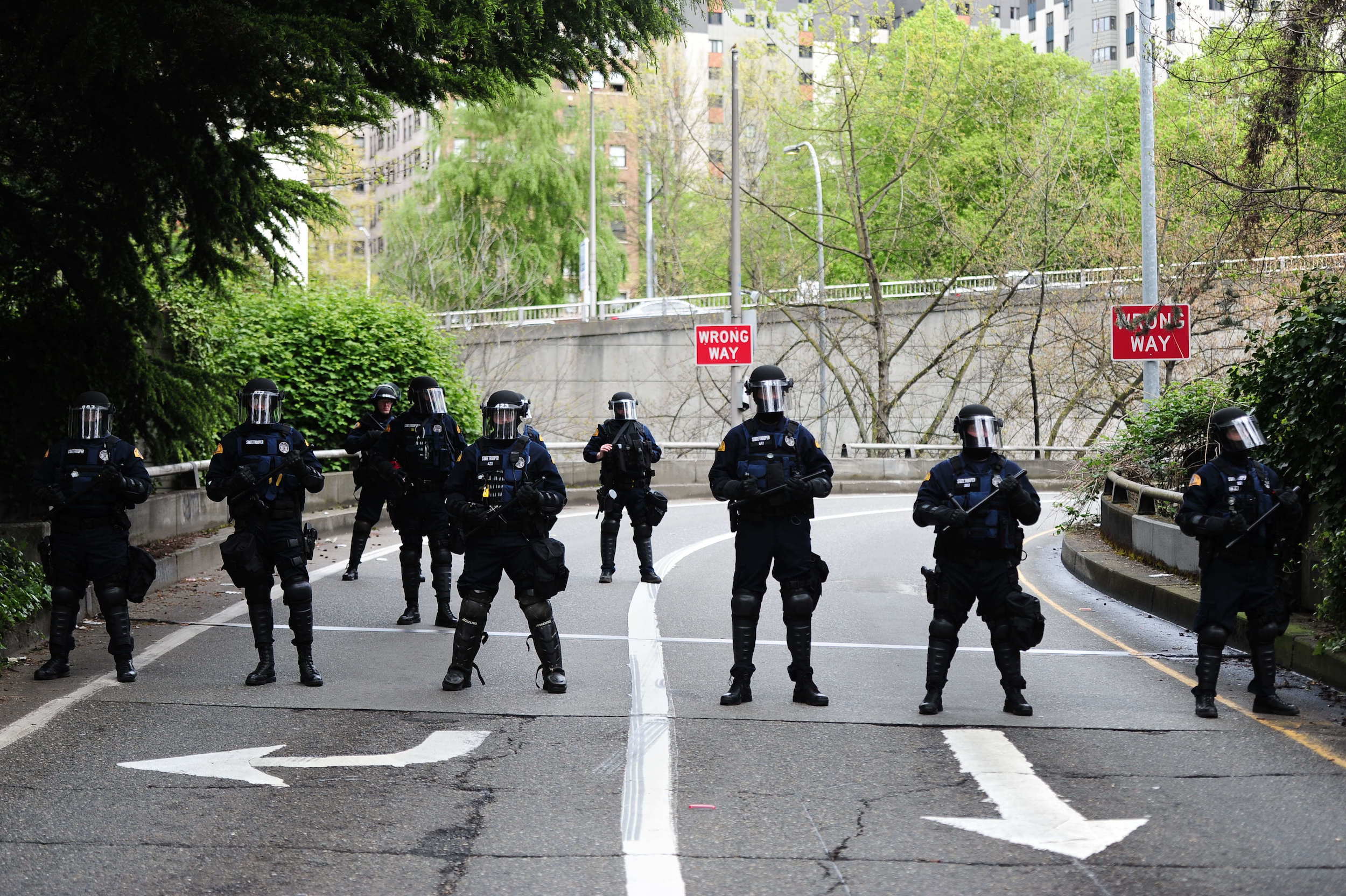 Police block the freeway entrances as protesters march through the streets on International Workers' Day in Seattle, Wash., on May 1 2017. (Photo by Alex Milan Tracy/ AP)

In 2011, the Seattle Police Department had a problem: It was failing to flag officers who were behaving badly and signs indicating potential future misbehavior were going unnoticed.

A fix put into place in 2015 was intended to end that. But if the bar was too low back then, the department now has a different issue: The newly reformed system apparently lacks any predictive power at all. Where a head-in-the sand attitude once let high-risk officers slip through the cracks, the department has found that its current approach is at best random and at worst biased against certain officers.

It is a frustrating, if not altogether surprising, revelation for a department just emerging from federal oversight. The new approach was supposed to prevent the kinds of incidents that drew the attention of the Department of Justice, such as the killing of John T. Williams by officer Ian Birk and officer Shandy Cobane telling a suspect that he would “beat the fucking Mexican piss out of you, homey.” When introduced, it was paraded as “a powerful tool that should enable SPD to identify officers whose at-risk behaviors exceed department guidelines.”

But it’s not delivering. “We acknowledge that the system is not working for us,” SPD’s Chief Operating Officer Brian Maxey said in an interview.

When the Department of Justice wrapped its 2011 investigation into the Seattle Police Department, it found that officers were using an unconstitutional level of force. More than that, there was little in the way of accountability or prevention; not only were incidents of force going unreported, but the systems to rein in problem officers before their behavior grew more serious were ineffective.

For example, one officer used force 20 times in 14 months, including with a baton and flashlight. The DOJ considered some of the instances to be “excessive.” That officer should have been pegged for more intense monitoring, said the DOJ report. Instead the officer was given a pep talk and a pat on the back.

So, as a part of the federally mandated reforms that followed the investigation, the department was told to create a new “early intervention system” that could  indicate when an officer needed more monitoring. The department did just that, gaining federal approval for new policies in 2015.

At the time, early intervention systems were in vogue. As a part of federal consent decrees to reform local departments, they were also prescribed in Los Angeles, Cincinnati, Pittsburgh, Washington, D.C. and elsewhere. A July 2013 report issued by the Police Executive Forum, a nonprofit professional organization for law enforcement chief executives, called early detection one of three “key” reforms, alongside training and improved policies, despite its complexity to implement.

But in the few years since, police experts have turned against them. Los Angeles’ inspector general concluded in 2014 that, for the time and effort it took to get a system up and running, the payoff was negligible.

Other departments are coming to similar conclusions, a fact noted in a memo drafted by SPD officials and sent to the monitor overseeing reforms and provided to Crosscut. “Although consistent with common practice at the time the Consent Decree was drafted,” it reads, “in recent years this model has come into substantial disfavor as a growing body of empirical research has shown the model to be ineffective.”

In Seattle, leadership questioned the system based on which officers were being flagged. “The line supervisors were saying, ‘That’s really strange because he or she is one of my really good officers and I don’t know why they’d be on the list,’” said Assistant Professor in the Washington State University College of Nursing Lois James, who partnered with SPD to study the system’s effectiveness.

Their suspicion bore out in the WSU study. After examining 1,000 police reports — 500 from officers who were labeled as high-risk, 500 from those who were not — the researchers concluded that there was no long-term difference between the two categories.

The problem, it seems, is with the “triggers” that were once thought to forewarn bad behavior. They seem logical: complaints lodged against the officer, unexcused absences, equal employment opportunity complaints and consistent instances of using force.

But those data points were more indicative of where an officer served than anything else. “One of the outcomes is use of force and you can’t compare an officer that works in a really high crime district to someone who works in a much more affluent area with low crime,” said James.

And for reasons that James did not entirely understand, female officers were 8.5 percent more likely to be labeled as worth monitoring than male officers.

Maxey with SPD said that the system has had a real effect on officer morale; although being flagged does not warrant discipline, officers sometimes feel they’re being punished and are unclear why. “Because it isn’t working as intended, but it’s still viewed as legitimate [by officers], I think it damages our credibility in managing our department,” he said.

As a result, the department has expressed an interest in moving away from its current system. “What we’re advocating for is finding some way of monitoring and punishing behavior as opposed to monitoring and punishing outcome,” said James. “An officer can do everything right and have a bad outcome. On the flip side, an officer can do everything wrong and it can turn okay.”

The department for its part has proposed monitoring something less tangible: traumatic events. Repeated exposure to traumatic or high stress events may cause varying levels of PTSD, meaning in future incidents that officer may be more likely to quickly escalate the situation. Maxey pointed to the officer in Texas who brutalized Black teenagers at a pool party. His long shift and exposure to stressful events prior should have been a warning, he said.

In the meantime, the department is not shedding the system yet, but has requested permission from the federal judge overseeing reforms to adjust. “We will not eliminate our early intervention system until we have something that is actually useful and better to replace it,” said Maxey.