New polling shows Seattle still supports a fancy waterfront park. But are the people who have to help pay for it happy? 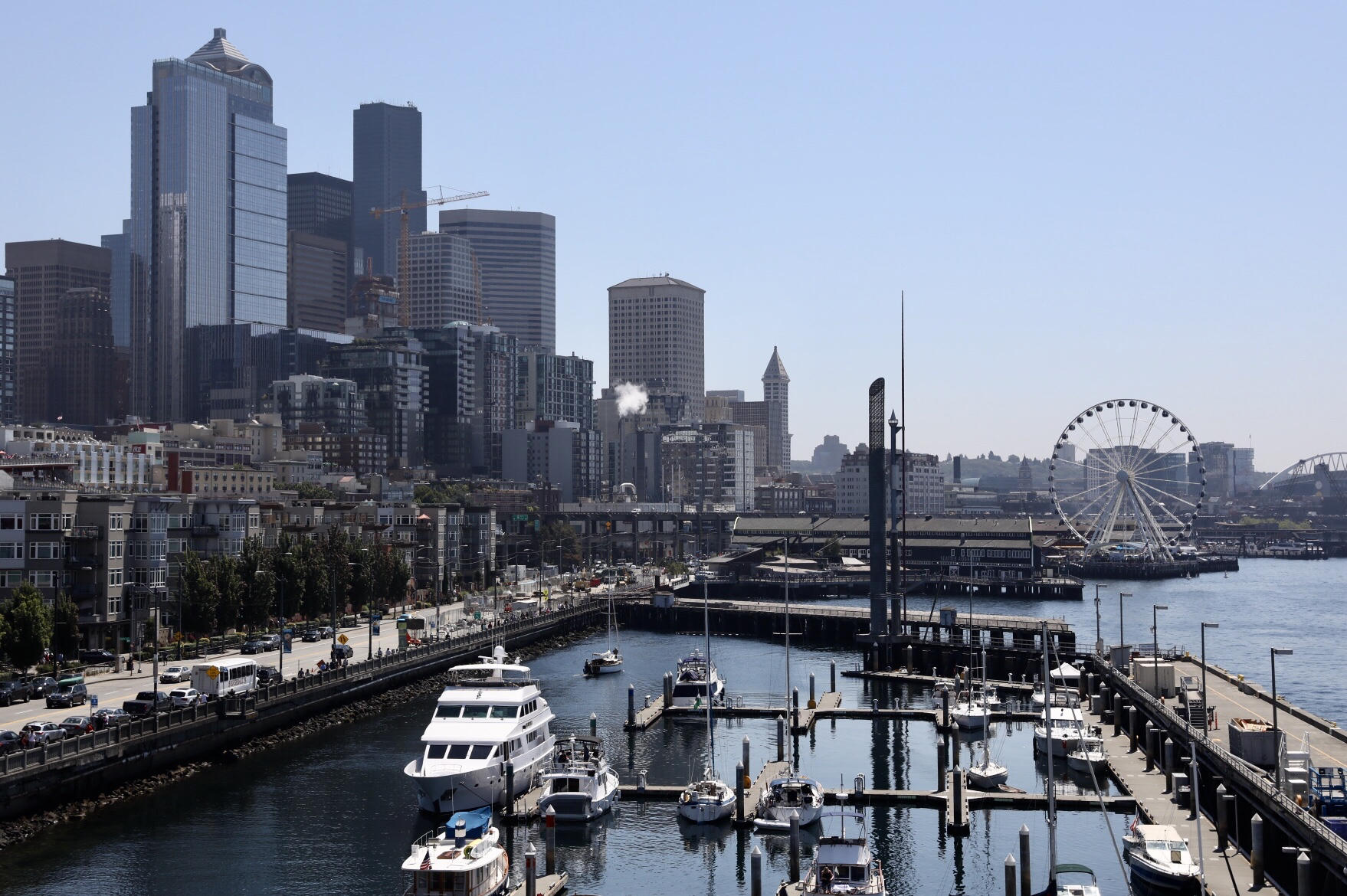 When Gerry Johnson looks west from his Second Avenue office toward the waterfront, he sees beyond the rumbling of the viaduct and the traffic backed up behind ongoing construction. For the longtime proponent of the redevelopment now underway, the current chaos is a precursor to something greater — it's the “ultimate expression of the evolution of the city itself over time."

In this he’s not alone. As Seattle wonders if it's finally becoming a big city, the most outspoken cheerleaders of a new waterfront park see an opportunity to settle, once and for all, the debate over whether Seattle is in fact “world class.”

James Corner, the same man who designed the High Line in Manhattan and was tasked with turning London’s Olympic grounds into a public park, is the lead designer on the new space. Johnson, an attorney and member of the Seattle Central Waterfront Steering Committee, convened by the Seattle City Council in 2014, readily admits that the coming waterfront is meant to be “a very high-quality product” and therefore “not cheap.”

After more than a decade of conversation and years of delay, the realization of the new waterfront is finally coming into view. But for the billions of dollars it’s taken to get to this point — if you include the cost of the coming viaduct teardown and the tunnel that will be replacing it — the fate of this grand vision now rests on one final installment of $200 million. The city is looking to downtown residents to provide that money in the form of a neighborhood specific tax known as a Local Improvement District or LID.

RELATED: "Seattle's new waterfront design will play to your instincts"

This new ask comes during an apparent shift in attitudes regarding taxation in Seattle — a city long known for its generosity. Lingering in the minds of both opponents and proponents of the proposed LID is the dizzying defeat of the head tax for homelessness and housing — which was passed unanimously then repealed a month later amid loud opposition.

The concerns that brought down that tax, namely that people don’t trust the city to properly spend its funding, persist among skeptics of the LID. When asked if his opposition is rooted in mistrust of the city, downtown resident Bob Stevens answers, “No doubt about it.”

“It does feel different,” says Director of the Office of the Waterfront Marshall Foster.

Polling on the waterfront and the new tax, provided to Crosscut by park advocates, shows broad support across the city for both. The LID is likely to get final approval from the City Council this fall. But to get there, council members must first contend with what has become a very vocal opposition.

The total cost of the new waterfront promenade will come in at a hefty $688 million. The state and the city will both cough up just under $200 million each. An additional $100 million is slated to come through philanthropy.

But the last $200 million will come from the LID — a state sanctioned, hyper-local tax. In this case, residents and businesses in a footprint that covers ground from the waterfront to near I-5 and stretches from Safeco Field north to Denny Way, would pay the new tax while the rest of Seattle would not. The city has used LIDs before, on things like installing underground cables for certain neighborhoods. But the waterfront LID is the most expensive the city has ever proposed.

City officials see the contributions as a sort of quid pro quo for the benefits those downtown residents will receive from a fancy new park, not least of which is a sizable bump in appraisal values. Stevens' condo alone stands to gain over $35,000 in value, according to the city's assessment.

This is a massive project, says the Office of Waterfront’s Foster, already funded in part by all taxpayers in the city and state, via real estate excise taxes, the city’s park’s levy, commercial parking tax and others. “Given that unprecedented scale, there’s a special benefit that downtown receives that’s different from the rest of the city,” he says. That benefit extends even beyond the waterfront, as the project will offer improvements up Pike and Pine streets as well.

It’s the targeted nature of this taxation, though, that’s bothering the downtown residents the most. “We’re all in favor of the waterfront redevelopment and the viaduct coming down, but this whole LID concept is ill-conceived and it puts a disproportionate burden on residents in the downtown area,” says Stevens, who has lived in his downtown condo for 20 years. “The city has handled it poorly from the beginning.”

For Stevens, the ambitious plans and the recruitment of designer Corner confuse him. “He came up with all these grandiose plans,” he says. “It’s beautiful and it’s a great concept. The problem is the expense. Can we really afford what he envisioned?”

Stevens says he’s frustrated with how the city has communicated with people like him. “It’s not even about the money. It’s about the process.”

On a citywide level, Stevens is in the minority. The non-profit Friends of Waterfront Seattle and EMC Research conducted a poll of 700 people — 100 from each district — last March and found that support for a new park is overwhelming: 77 percent across the city approved, even after being provided with a sample of the negative spin. That level of support is consistent with results from a similar poll in 2015.

Favorability for the proposed LID is solid, too: 69 percent support after hearing both pro and con arguments.

But the poll does not isolate the group of people who would actually pay the tax. District 7, which includes downtown, has the lowest level of support, at 57 percent. That's 12 points lower than the overall support of 69 percent. But that includes residents of Queen Anne, Magnolia and other neighborhoods who would not pay anything under the proposed LID.

It's shaky science to correlate turnout at city council meetings with the feelings of the population as a whole, but opponents of the LID tax have a tendency to turn out in large, and vocal, numbers.

Stevens says his views are common among downtown homeowners: In addition to questioning the cost, he worries about normalizing the use of LIDs. He also wonders what happens if the project goes over budget, a not uncommon thing in recent Seattle construction.

Foster with the waterfront office says he does not think the city will suddenly see an increase in the use of LID use across the city. But the overrun question is more serious. Foster says he feels confident it won’t be a problem. “Given everything we’ve experienced with cost of construction, we’ve really aggressively addressed out contingencies,” he says.

But as it stands, LID payers could theoretically be on the hook if the project goes over budget.

Bagshaw, herself a downtown resident, calls concerns about overruns "very fair." Between now and next fall, when the council is likely to vote on the LID, she says she wants to guarantee that those in the LID won’t be responsible for overruns.

She also questions whether, in this moment, the city would have been so ambitious on the park's design. "If we were just sitting down today and trying to decide, 'Are we going to do something like this today?' I think you and I would say no," she says. "But we’ve been working on this for 15 years. If we don’t do it now, it’ll be another generation before we come back to it, and that would be a shame."

There will be four public hearings before a hearing examiner throughout July. The examiner will then return the comments at the hearings back to the council, which will vote on its approval in the fall.

The public has 30 days to formally protest the LID. But owners of 60 percent of downtown’s assessed value would have to sign onto the protest, which even Stevens is skeptical they can hit.

Beyond that, it’s hard to see a path for the downtown opponents save for one thing: old school lobbying.