As the EPA administrator's scandal-plagued tenure comes to an end, the agency faces a future of better behavior and the same bad policy. 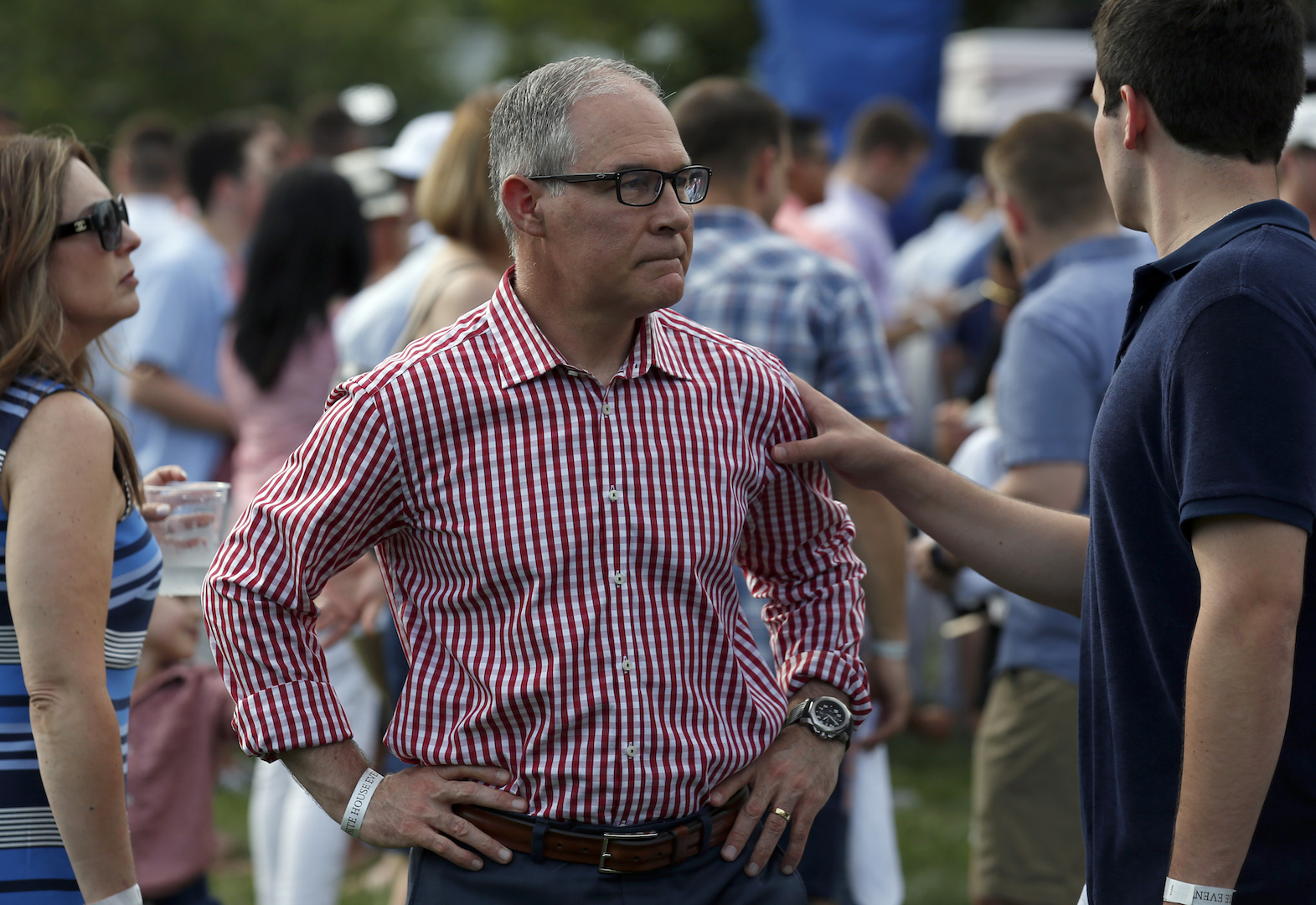 In this July 4, 2018, photo, Environmental Protection Agency Administrator Scott Pruitt stands on the South Lawn of the White House during a picnic for military families in Washington. President Donald President Trump tweeted on July 5 that he had accepted Pruitt's resignation. (AP Photo/Alex Brandon)

Twitter was a’flitter Thursday, as Northwest conservationists and good-government activists marked the “resignation” of EPA Administrator Scott Pruitt. Pruitt was a lightning rod for the environmental community; a profile in self-dealing, he was swampy and reckless enough to provoke conservatives such as Laura Ingraham to demand he get the heave-ho.

Pruitt also spurred push-back litigation from this Washington and throughout the country. In a statement, Attorney General Bob Ferguson noted that the state has joined or led “nearly a dozen lawsuits” against Pruitt’s EPA, all successful thus far, with three judgments that the EPA cannot appeal.  (Ferguson and Gov. Jay Inslee’s Trump-fighting tag-team press conferences have become so routine that they’ve generated their own backlash.)

“Regardless of his or her political ideology, the EPA must have an ethical, law-abiding leader in order to fulfill its critical mission,” Ferguson said. “If the next EPA administrator fails to learn from Pruitt’s example, we will continue defeating the agency’s actions in court.”

That next administrator is likely to exhibit more guile and better judgment than Pruitt. As the bête noire of Northwest conservationists, Pruitt generated as much righteous anger as Ronald Reagan’s Secretary of the Interior, James Watt. But the poster boy soon will be replaced by an equally shrewd, landmine-avoiding Andrew Wheeler, a lobbyist extraordinaire.

Much of Washington’s EPA litigation revolves around alleged violations of the Clean Air and Clear Water Acts, as well as ground-level ozone standards, a delay of the Chemical Disaster Rule, and a rule watchdogging emissions for new oil and gas facilities. Another bugaboo that affects Northwest fishers is the proposed Pebble Mine in Bristol Bay, Alaska. On this, Pruitt’s EPA has been hard to pin down.

In April, both of Washington’s U.S. Senators, Patty Murray and Maria Cantwell, co-sponsored a no-confidence resolution demanding that Pruitt resign. The resolution’s language is damning. “Administrator Pruitt has continually overridden the recommendations of scientists of the Agency in order to provide relief to industry, leaving in place the use of harmful chemicals, pesticides, and policies that are directly impacting the health and well-being of millions of people of the United States.”

In the Northwest, Pruitt’s tenure also kindles nostalgia for the recondite William Ruckelshaus, the first EPA administrator, who made a return engagement as administrator in 1983 to revive the agency’s culture and high standards in the aftermath of Ronald Reagan’s befuddled first appointee, Ann Gorsuch Burford (the mother of President Trump’s first U.S. Supreme Court appointee, Neil Gorsuch). Ruckelshaus, who has led the push for salmon recovery and cleaning up Puget Sound, has been critical of Pruitt and the agency’s transparency.

Pruitt’s entitled MO transcends party and is at least as old as the Machiavellian characters in Henry Adams’s Democracy and the Gilded Age abuses lampooned by the cartoonist Thomas Nast. It’s easy to caricature Pruitt as a 19th century lobbyist leering from the U.S. House Gallery in a “big coal” sash. Plus there were his customized fountain pens, the magoozling to land his wife a Chick-fil-A franchise, and, of course, a $25,000 “cone of silence” for soundproof phoning. Power really does corrupt.

"It's pretty clear that pollution is a feature of the position, and will likely remain through this administration,” said Mitch Friedman, the founder and longtime executive director of Conservation Northwest. “Whether corruption was a bug or a feature, time will tell."

The battles are far from over. And now we won’t have Scott Pruitt to kick around anymore.