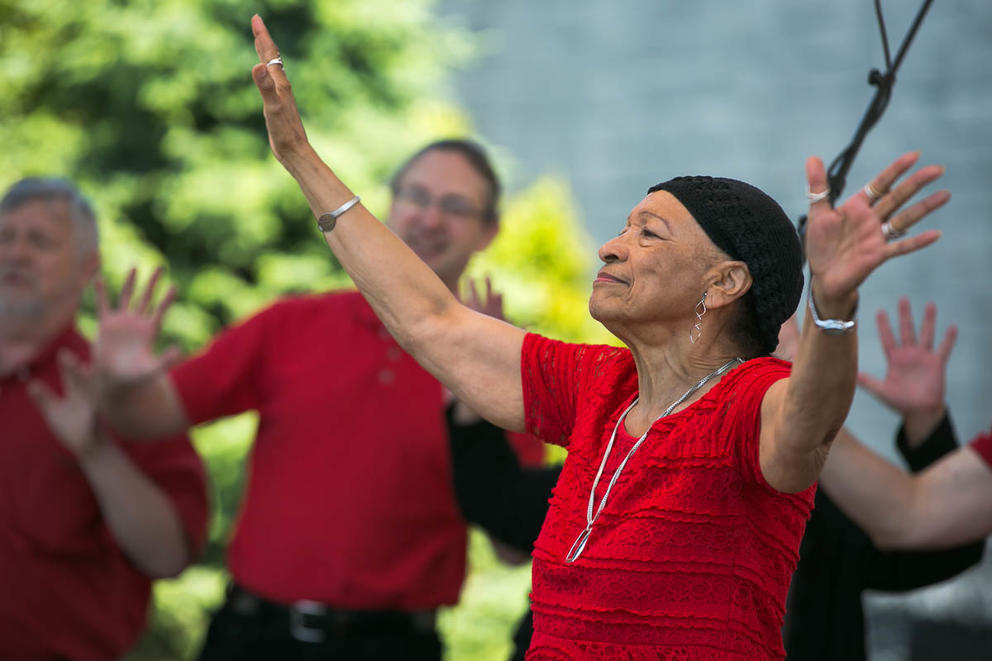 Every year since 2015, Velocity Dance Center — in collaboration with the University of Washington Dance Department — has offered choreographers who’ve lived in Seattle for three years or less a chance to create works under a tight four-week deadline. This summer, three dance-makers have accepted the challenge. Angel “Moonyeka” Alviar is using every nook and cranny of Velocity’s studios in an installation-like piece featuring non-White performers, some of them transgender. Her most provocative touch: stocking Velocity’s bathrooms with skin-whitening cream. In Alison Burke’s It’s Okay That I Don’t See You Now Because I Know I’ll See You When I Die, a female narrator attempts to “communicate with someone who is no longer here,” while half a dozen dancers reflect her feelings, frustrations and resentments. Timothy M. Johnson has the most unusual story behind his work. Five years ago he was the only survivor of a fatal car crash that landed him in the hospital for 57 days, three of them in a medically induced coma. Johnson’s The Fifth Floor consists of a short film followed by dance that draws on the painstaking repetitive actions of the physical therapy he underwent. The crunchy electronica score by Winnipeg-based Venetian Snares feels like brutal collisions finding their metallic groove. —M.U.

If you’ve got it, exploit it! North Bend will forever be the place where FBI Agent Cooper (Kyle McLachlan) went for a slice of cherry pie and “a damn fine cup of coffee” in David Lynch’s cult series Twin Peaks. Now a band of movie buffs has parlayed the town’s “fantastical and mysterious energy” into an offbeat film festival. (Tagline: “Something strange is coming to North Bend.”) The lineup includes 14 feature films, three shorts programs and half a dozen virtual-reality offerings, all of them tampering with the world as we know it. In Billy, a ventriloquist finds himself at the mercy of his acerbic, libidinous dummy. In Model Home, a young Latina mother and her son are hired by a realtor to occupy a foreclosed house in a desolate desert suburb, in hope of luring a buyer. (Alas, things take a psychotic and hallucinatory turn.) Gus Van Sant’s 1991 classic, My Own Private Idaho, starring River Phoenix and Keanu Reeves, also gets a screening. And naturally, festival attendees can take a “Twin Peaks” shooting-location tour. —M.U.

The nonfiction writer (The Price of Thirst: Global Water Inequality and the Coming Chaos) digs into her own life in A Girl’s Guide to Missiles: Growing Up in America’s Secret Desert. All four members of her family worked at the China Lake missile range in the Mojave Desert. What drew them there? Piper explains: “People don’t become weapons developers because they want to kill people. They build weapons because they want to do something else but cannot get a job in that something else.” Here’s a chapter of Cold War history recounted from an unexpectedly personal angle. —M.U.

A couple weekends ago, as part of Seattle Art Fair, UW’s Jacob Lawrence Gallery held an outdoor screening of Exquisite Corpse, by L.A.-based filmmaker Kerry Tribe. This 51-minute documentary, about people living alongside the 51-mile L.A. River, reveals Tribe’s tremendous sense of craft, and her incisive grasp of human nature — particularly the way it finds a way to defy constraints, like green tendrils through cracked concrete. The river-shaped storyboard and gorgeous test shots for Exquisite Corpse are currently on view at the gallery, as well as another of Tribe’s fascinating California stories, Standardized Patient. In the latter, she filmed medical students being tested on their bedside manner by actors portraying challenging cases. The students know they’re being “graded” by the actors, under the proctor’s gaze, which flips the traditional power structure of doctor/patient. These artificial interactions are riveting, sometimes funny and, in the moment a student knows they’ve blown it, crushing. —B.D.

If you go: Jacob Lawrence Gallery, through Aug. 25

Bask in the sacred choral music of composer Leonard Bernstein on the evening of the 100th anniversary of his birth. Organist Joseph Adam, harpist John Carrington and percussionist Matthew Kocmeiroski join the noted Seattle choral group for performances of Bernstein’s “Chichester Psalms,” “Missa brevis,” “Kaddish” and other works in English, Latin, French and Hebrew. It’s a chance to savor a different side of the composer who gave us “Candide” and “West Side Story.” —M.U.

The great Dutch trompe l’oeil artist (1989-1972) realized the impossible on paper — so successfully, in fact, that it may help to take a little Dramamine before giving his more eye-confounding pieces a gander. This exhibition of prints includes some of his biggies: Waterfall in which a flat waterway somehow ascends two stories to plunge back into itself; Convex and Concave, an architectural fantasia that makes it impossible to get your bearings; and Day and Night, in which a flock of white birds and a flock of black birds seem to spring from each other’s winged outlines. Just as beguiling are Escher’s nature studies: Puddle, which reveals expansive sky reflections in a modest, water-filled tire-track rut, and Grasshopper, which plays no visual tricks but has a mighty iconic presence. The masterpiece here may be Bond of Union, in which the heads of two lovers incline toward each other. The twist: Their facial features occupy what look like two ribbon-peeled oranges set afloat in some vast orb-filled cosmos. —M.U.

If you go: Davidson Galleries through Sept. 1