With lessons learned from other locales, officials are welcoming a small fleet of Lime Bikes to city streets featuring new bike lanes. 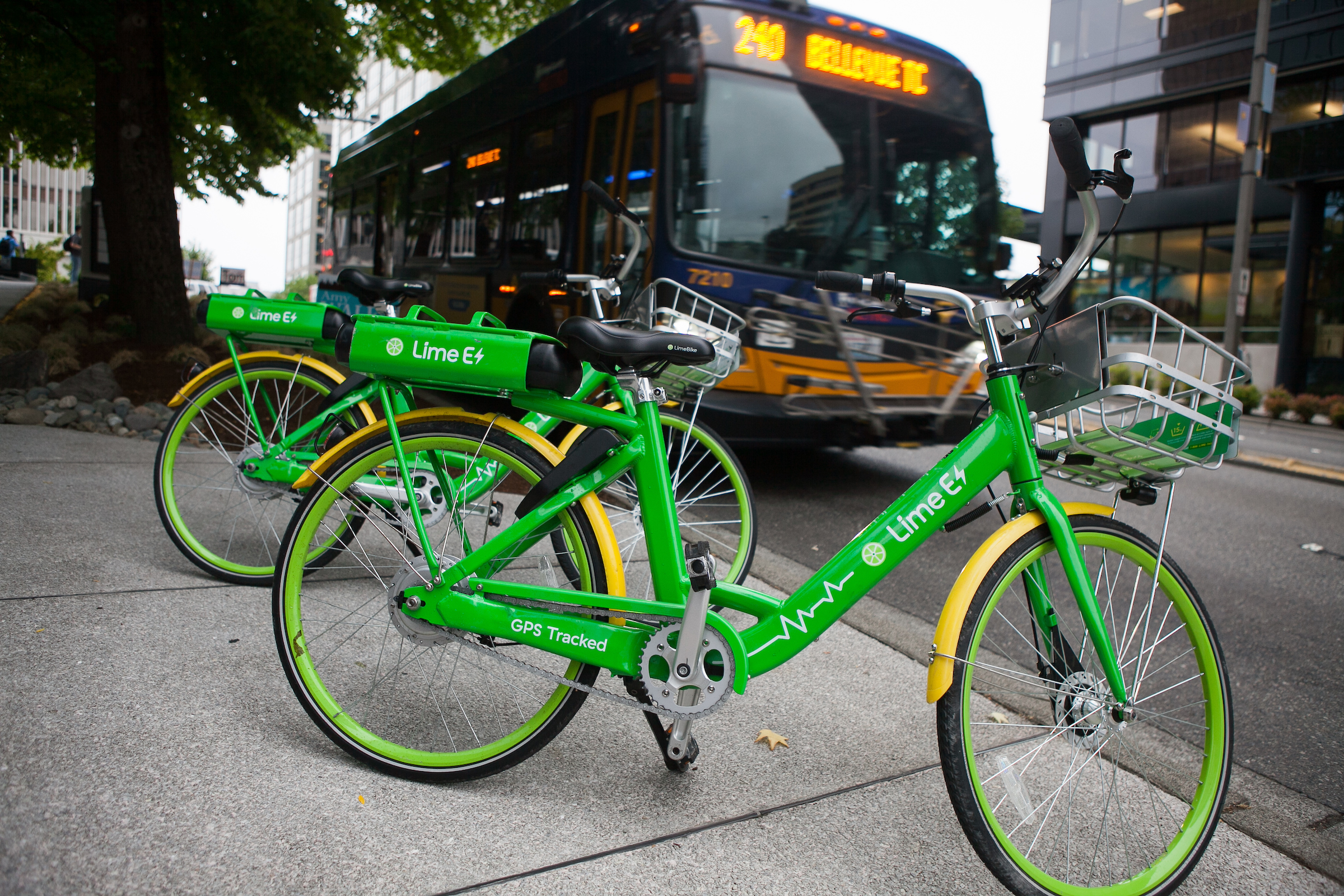 Limebikes on Wednesday, Aug. 1, 2018, in Bellevue, Wash. Bellevue launched its own bike share program on July 31, at the same time as it open its first protected bike lane. (Photo by Jovelle Tamayo for Crosscut)

July 31 was a big day for cyclists on the Eastside. Just a few days after its neighbor to the west had rolled out renewed plans for its own bike network, city officials, transportation department employees, bike advocates and others gathered in downtown Bellevue to launch that city’s first protected bike lane and to welcome its first private, dockless bike share company. Six of the city’s seven councilmembers took the bright green Lime Bikes for a lap down the newly-constructed lane on 108th Avenue, one of the early projects in the city’s Bicycle Rapid Implementation Plan.

The bike-share launch and bike lane grand opening are modest milestones: The city only permitted 50 bikes for launch day and the bike lane is just three-quarters of a mile long. But advocates say it marks an important shift in Bellevue’s approach to cycling — one that could result in a robust, connected network of bike lanes that make riding a much more viable way to get around the Eastside’s biggest city.

Transportation planners say their approach to both bike share and the coming bike lane network benefited from lessons learned by Seattle and other cities around the country. Bellevue is wading in cautiously to try and avoid the problems other cities have seen in the early flood of bike share, but also trying to move quickly to provide safe spaces in which users can ride.

“We are trying to learn from others’ experiences,” said Andreas Piller, an associate transportation planner with the city. “With bike share we looked at cities across the country and even internationally to try to understand how to strike the balance between providing a useful new mobility tool while managing the potential impacts it can have on the public realm.”

Bellevue’s solution is to impose tight regulations, limiting how many bikes can operate in the city and where they can be parked during the one-year pilot permit it has granted to Lime. By the end of August, Lime will be allowed to have up to 400 bikes in the city. After that, they will be allowed to add another 100 bikes every four weeks. Piller said the limited launch is meant to ensure that the city can keep a handle on the bikes as the “companies establish they can manage their fleets effectively.”

It’s a stark contrast to Seattle, which allowed almost 10,000 bikes when it launched last summer. Dallas stands as one of the most cautionary tales in the U.S. When the city opened its doors to bike share last year, it allowed more than 20,000 bikes from the get-go, resulting in piles of vandalized, discarded bikes. Seattle has seen vandalism as well, but not at the same scale.

Even without vandalism, other cities have had to contend with general bike clutter. To address the problem of bikes parked in the middle of the sidewalk and in doorways or blocking ADA curb cuts, Bellevue has painted 15 designated dockless bike parking corrals that can fit about six bikes each on sidewalks downtown. They plan to add another 10 corrals soon. It’s a similar approach to one Seattle has been experimenting with, but Bellevue is well ahead of its neighbor. Bellevue is also using geofencing to prevent bikes from being left in parks. Riders will be unable to lock the bike and will continue to be charged until they move the bike to a sidewalk outside of the geofence.

To make sure people are comfortable riding bike share and “not put off by the perceived physical limitation,” said Piller, Bellevue is only allowing Lime Bike to place electric-assist bikes in the city, providing a boost of power to anyone who wants to take a ride. The company’s Seattle fleet, by comparison, is about 12 percent electric, though Curbed Seattle reports their goal is to increase that number to 40 percent as soon as possible.

Cascade Bicycle Club’s Vicky Clark, who until recently served as the club’s East King County Policy Director and is now Seattle Policy Director, says that the e-assist makes the bikes easier to ride, but that there is a downside. The bikes are much more expensive to rent than Lime’s pedal bikes, potentially putting Bellevue’s bike-share program out of reach for low-income residents. Lime pedal bikes cost $1 for 30 minutes. Their electric-assist bikes cost $1 to unlock plus $0.15/minute, which adds up to $5.50 for a half hour.

The city’s push to build bike lanes is integral to the bike-share launch, a recognition that for the program to succeed, people need to feel safe as they ride. “Protected facilities go a long way towards making this a viable mobility choice,” said Piller.

The 108th Avenue protected bike lane runs north-south from Main Street to 12th Street. It is separated from traffic by plastic bollards and planters as opposed to just paint. The three-quarter-mile bike lane is one of the first of 19 miles of bike lanes the city plans to build this year. The city is treating the lane as a demonstration project. They’ll collect data for one year, make tweaks to the design, and then, if the lane is working as desired, they’ll make it permanent.

“The city’s approach to this demonstration bikeway was a really smart one,” said Clark. “They were able to say ‘this is a demonstration and we’re going to see how it works’ and build it rather than having years and years of debate.”

Bellevue’s Bicycle Rapid Implementation Plan calls for a similar approach to a total of 52 bicycle projects that will add about 57 miles of lanes, trails and other bike facilities to the city. The plan is funded by a 2016 voter-approved transportation levy. Rapid implementation doesn’t necessarily refer to the speed with which the city will build out those 57 miles of infrastructure (there isn’t a set end date for completion), but instead how they’ll do it.

“It is rapid because we can complete these projects within the existing pavement as opposed to rebuilding streets, installing new cement and moving curbs, which is much costlier and time-consuming to install,” said Piller.

Claire Martini, Cascade Bicycle Club’s new east King County policy director, said the city is particularly well positioned to use that approach. “Because of the way Bellevue was designed for cars, they have these huge, wide streets. It actually provides a lot of right-of-way for bike infrastructure.”

There are a few established implementation goals, however. In addition to the 19 miles of lanes the city plans to build out this year, its goal is to have two north-south protected bike lane corridors running through downtown (including 108th) and two east-west corridors by the end of 2019.

That sort of connectivity has been shown to increase ridership. “There is a network effect,” said Clark. “We talk about a network only being as strong as its weakest link. People need to be able to get from place A to place B without being dropped into fast moving traffic. If there’s even just a block of that some people are not going to ride their bike.”

Clark sees the bike plan and launch of bike share as early signs of Bellevue’s potential to move beyond its car-centric reputation.

“By 2023, Bellevue’s going to have five light-rail stations, have seven miles of the Eastside Rail Corridor Trail skirting downtown, and they have the 520 and I-90 trails,” she said. The city realizes they have a real opportunity to leverage those investments and make downtown and the surrounding areas much more walkable and bikeable. The challenge now is just to keep it up.”