The revamped Bellwether event aims to prove the city is more than malls. 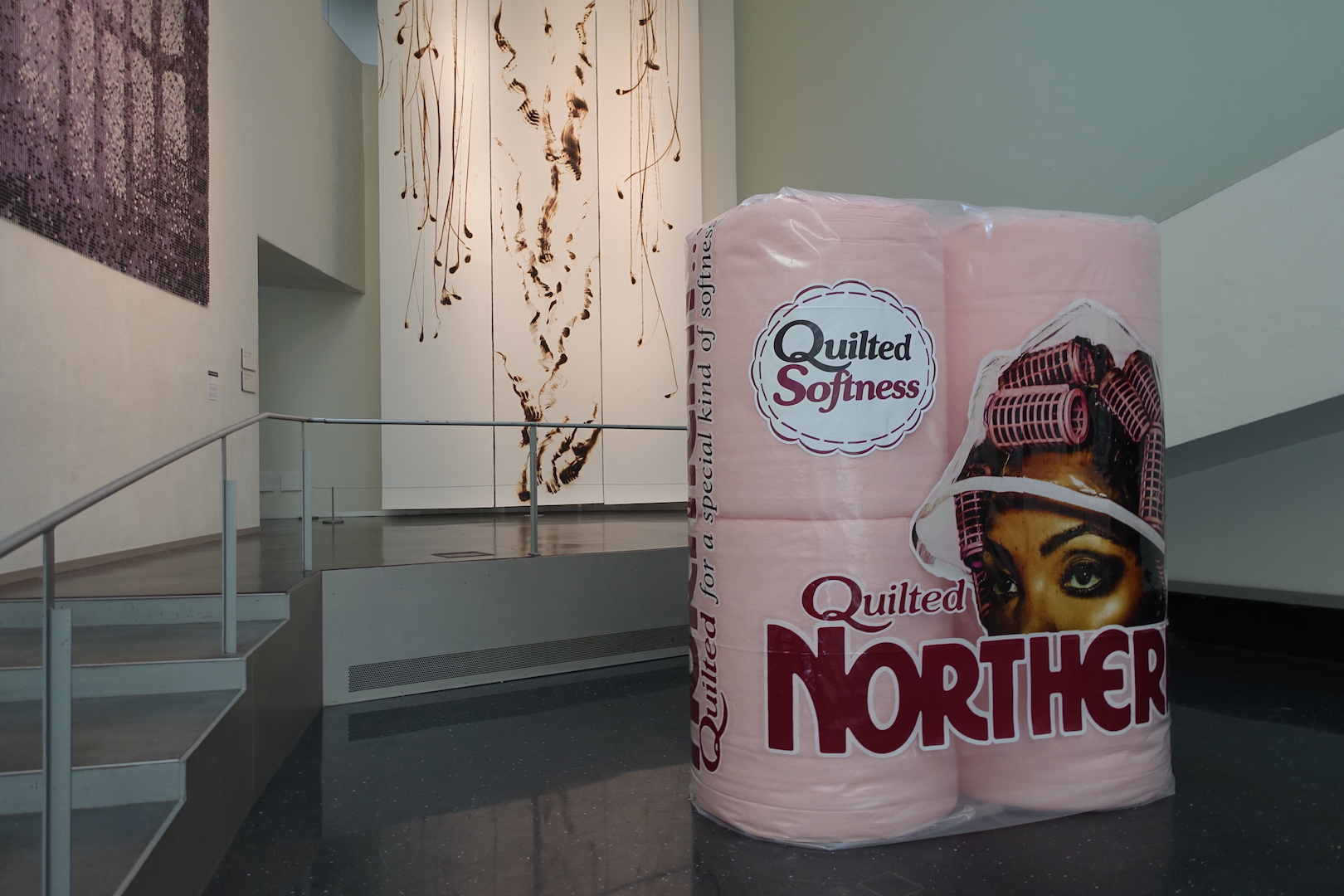 It’s Tuesday before the Friday opening of the Bellwether show, and the second floor of Bellevue Arts Museum looks like some kind of contemporary-art Christmas morning. Boxes of just-opened art abound — paintings lean against walls, fabric works lie folded on tables, smaller objects sit atop nests of bubble wrap. Artists stop by bearing gifts in the form of artworks ready for installation. The crumpling sound of protective paper being unwrapped signals each new arrival, while a drill whirrs in a distant room as if someone is putting new toys together.

“It’s weird seeing all the art in the space,” says John Sutton, standing next to a Genie lift. “At first it seemed like we had too much, and then maybe not enough. But now we’re feeling good.”

Sutton is one-third of the Seattle-based art collective SuttonBeresCuller, along with Ben Beres and Zac Culler. The trio — now in its 19th year of working together — has been tapped by the City of Bellevue to curate and rework this year’s Bellwether festival.

Not to be confused with the Bellevue Arts Festival (the arts and crafts weekend that takes place every July), the Bellwether arts festival has traditionally been a three-month-long, largely static sculpture show held every other year since 1992. While working with SuttonBeresCuller on a longer-term civic project — the massive pedestrian pathway known as Bellevue Grand Connection — the City asked the team to help with a refresh on the biennial.

“When the festival started 25 years ago, no one lived in downtown Bellevue,” says Joshua Heim, Arts Manager for the City of Bellevue. “The only businesses were PACCAR, a few banks and the mall. It was a place that needed to be revitalized, and Bellwether was an arts attractor project.” Now that approximately 14,000 people live downtown, Heim says, “We no longer need to plant that flag.” Instead, the new festival aims to say, “This is your community. Be creative. Participate in the arts.”

But there’s an even bigger audience sought by Bellwether producers: the 50,000 people who head to Bellevue for work each weekday. “We want those commuters to know Bellevue has more to offer than shopping,” Heim says. “We want them to start to see Bellevue as a vibrant community where they can participate in culture, too. They’re already here, we just need to capture their attention.”

The new Bellwether attempts to do so by tightening the span of the outdoor festival (to 10 days, September 14-23), bringing in more arts happenings (including appearances by Seattle poet-scientists Vis-a-Vis Society, Iranian artist Sara Rastegarpouyani and legendary performance artist Guillermo Gómez-Peña), and for the first time, adding the companion show at BAM (August 31-September 30).

While most of the museum exhibits are on the second floor, the show grabs visitors by the eyeballs upon entering the lobby. Installed at the foot of the winding staircase is a towering replica by Seattle artist Tariqa Waters: an 8-foot-tall 4-pack of pink Quilted Northern toilet paper, embellished with a woman’s face, her hair in curlers. After a small hitch the day before (“She didn’t know it would be seen from above,” Beres says, “So she had to create a new top for the package”), the piece stands as a remarkable facsimile that also brings an air of humorous irreverence to the proceedings.

At the top of the second set of stairs, local mosaic artist Ari Glass stands atop a ladder, listening to Digable Planets as he adds double-sided Scotch tape to countless Post-It-sized scraps of gold joss paper, which will soon cover the entire wall swooping down between the third and second floors. “This space already has great light,” Glass says, thanks to translucent panels on the opposite side of the staircase, “But I want to create a fire, with an essence inside, a shining ambiance that takes it over the top and relights the space.” The title of his piece, “Relighting,” would seem an apt metaphor for what SuttonBeresCuller and the City of Bellevue are trying to accomplish with this new Bellwether — taking it over the top and showing the space in a new light.

In another room at BAM, a table full of recent Cornish grad Anthony White’s work reflects Bellevue’s sustaining reputation as a shopping mecca. The artist sourced paper shopping bags from luxury stores (Gucci, Tiffany) and used a tool similar to a hot-glue-gun to replicate the sacks with tiny threads of colorful polylactic acid, thereby simultaneously elevating the brands to art and dismissing them as something cheap. “The actual bags are inside the plastic,” Beres explains with a smile. “They’re entombed in there.”

Artist Sean Barton arrives with a flatbed dolly stacked with oversized “Pink Pearl” erasers that approximate the size of traditional mailboxes. Barton crafted them from thick latex that makes an appealing thwack when he swats one. The series starts with a pristine eraser, and each successive one is eaten away a bit more up to the final nubbin of pink and implied graphite.

Portland-based Crystal Schenk ascends the staircase carrying a sculpture of a seated boy beset with barnacles. Inspired by a trip she took with her son to the Olympic Peninsula, the piece is made of hand-formed clay and porcelain. Schenk sits on the floor unwrapping barnacle-bejeweled ceramic “stones” that when she’s finished will surround the boy like lily pads.

Beres walks from one museum room to the next. Despite having just bloodied his finger during a painting installation, he emanates the vibe of a parent whose 50-plus children are all his favorite. Gesturing toward the art, he keeps saying, “Isn’t this amazing? Now, wait’ll you see this one…”

He unfolds a huge grass-green quilt by Joey Veltkamp, designed to look just like the highway exit sign for Bellevue. “I asked people to respond to Bellevue,” he explains. He points out an abstract red-toned painting by Cable Griffith and says it’s based on historical photos of forests in the area. Similarly, Erin Kendig’s landscape illustration depicts a hemlock forest, also native to the area. And Culler’s own bright, beautiful acrylic mandalas depicting  invasive species remind us how seemingly harmless flora and fauna (American bullfrog, English Ivy, Scotch Broom) could devastate the region.

Whether you consider them invasive species or monuments of progress, the current Bellevue landscape is skyscrapers. And that’s why SuttonBeresCuller and the City are particularly excited about a specific aspect of the new Bellwether.

“I’m really proud of the team for doing our first murals,” says Bellevue’s Heim. “We went in thinking, let’s put murals everywhere, but we’re a brand new city, built more of steel and glass than bricks and mortar,” he explains.  Even a brief walk downtown makes clear the lack of wall space for murals. So the group got creative.

Portland muralist Damien Gilley’s geometric blue slash now dashes through the BAM parking garage. Crystal Barbre will live-paint a mural on a water tower in Compass Plaza during the festivities. And Baso Fibonacci is currently painting the long wall hiding the construction pit for the new Light Rail station at City Hall. In his mural, a stylized bear and two raccoons stare out at city goers, reminding us of the creatures that once filled the woods here with their own buzzing cultural scene.