Can virtual reality transform your reality?

A new experience goes beyond the headset to bridge connections and build empathy. 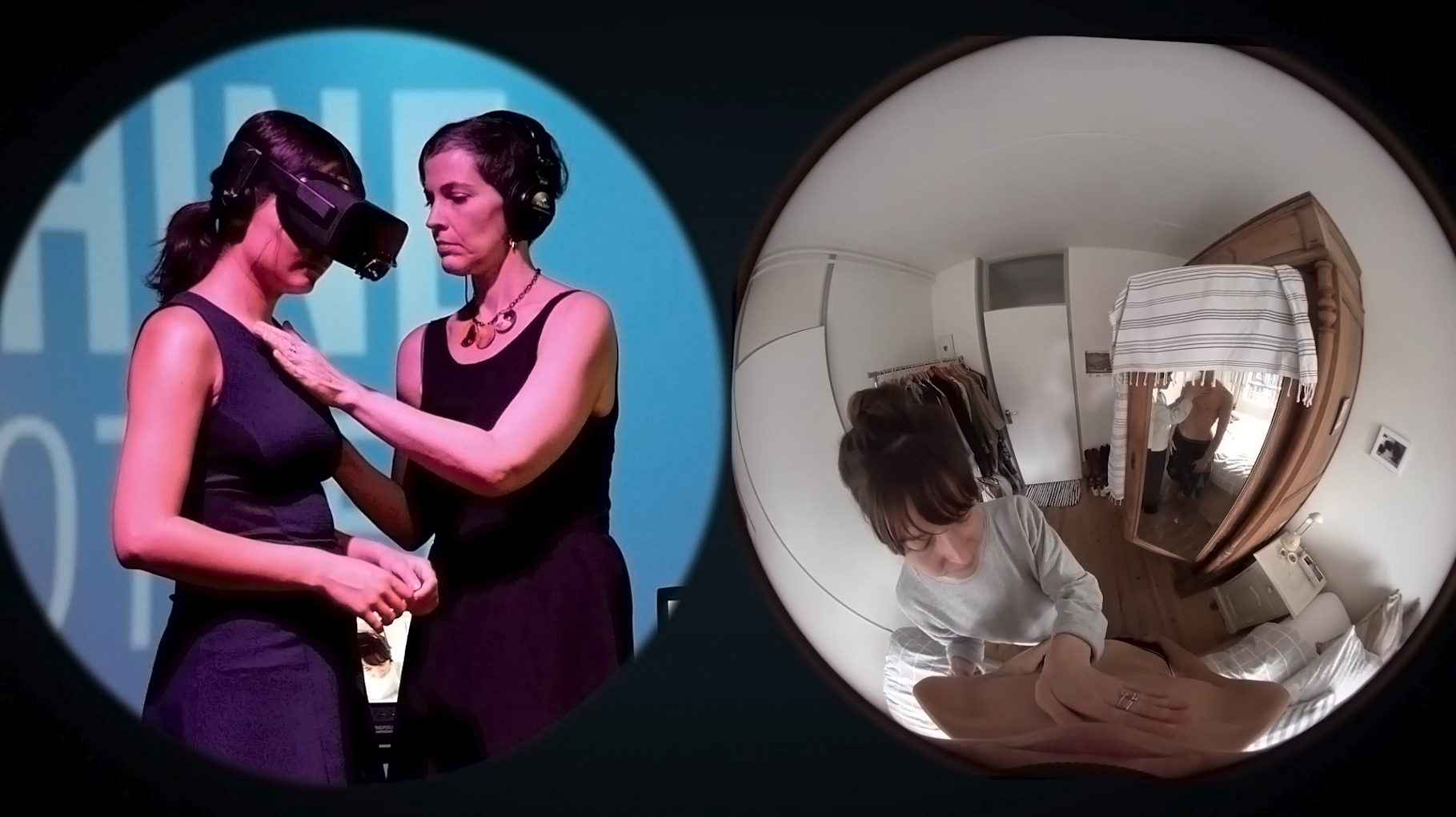 The “Machine to be Another” virtual reality environment creates experiences in which you can embody someone else. On the left, a participant is immersed in the first-person story being told in the video as a facilitator gently mimics the motions happening on screen. On the right, the video as seen through a VR headset. (Still image from video by Aileen Imperial/KCTS 9)

Standing in the busy railway station in Utrecht, Netherlands, I feel a billow of air whoosh across my face with each arriving train. I see people pour off the platform and into the corridor; they make quick eye contact with me and walk past. All around, I hear the cacophony of mass transportation. And inside my head, a voice: “I work here in Amsterdam with two other trans guys — we’re called the transketeers.” Two young men walk up to me, smiling warmly. One gives my arm a gentle squeeze and the physical sensation makes me feel grounded, among friends.

Except this isn’t me and I’m not here. I’m in someone else’s body.

This body- and border-crossing moment comes courtesy of The Machine to Be Another, a sci-fi sounding virtual reality (VR) experience developed by an international collective called the Be Another Lab. The group’s focus is on creating empathy-driven experiences that “bridge cultures and promote mutual understanding.”

By combining high-tech VR with low-tech physical interactions (in the above example, a facilitator waved a clipboard back and forth to create the “air” from the trains, and clasped my arm at the same moment as the transketeer in the headset video), the Be Another Lab creates so called “embodied narratives” — academic lingo for stories you feel in your body.

The Lab is compiling first-person day-in-the-life stories from all over the world, and transforming them into embodied narratives for a project called the Library of Ourselves. The idea is that by using The Machine to Be Another, people will be able to “check out” stories and get a full-body, tangible sense of another way of life.

Members of the Lab were in residency in Seattle over five weeks this summer (thanks to a technology grant from 4Culture), working with local VR collective fearless360° to establish Seattle as the first U.S. node for the Library of Ourselves.

“We’re working with communities that are marginalized,” says J.J. Devereaux of the Lab, whose experience as a massage therapist informs her work as a facilitator of embodied narratives. She says that in addition to the transgender man from Amsterdam, Jonah, the Lab has recorded personal stories from people living in the favelas of Rio, Syrian refugees in France and Muslim teens in Barcelona. “You experience their stories while you’re in their body, which helps you understand them,” Devereaux says. “And the storyteller feels like they’ve been heard.”

Longtime local documentary filmmaker Sandy Cioffi recalls the first time she experienced The Machine to Be Another, several years ago. “As soon as I tried it, I knew I was done with traditional filmmaking,” she says. “I could see its potential for creating real empathy and that’s all I wanted to work on.” She co-founded fearless360° with fellow documentarian Gretchen Burger in order to bring immersive, empathetic VR experiences to the Pacific Northwest, or what she calls the “Silicon Rainforest.”

“In Silicon Valley, profit leads technological developments,” Cioffi says. “In the Silicon Rainforest, we want to see technology developed for the human good.” In other words, instead of using VR for first-person shooter games, adapt the technology for first-person cultural exchange.

Fearless360° helped bring the Machine to Seattle once before — in 2016, as part of Twist: Seattle Queer Film Festival. There, participants lined up to experience the Machine’s other functionality: body swaps. (See our coverage from that event.) In this application, two people, each wearing VR headsets with cameras mounted atop, synchronize their movements so as to heighten the perception that they’ve exchanged bodies.

So how does it work? The Machine to Be Another is based in cognitive neuroscience involving the concepts of “limb ownership” and “full body ownership.” Scientists such as Stockholm-based Henrik Ehrsson have proven — via experiments with rubber hands and mannequins — that it isn’t really that tough to convince the brain it’s in charge of a body that isn’t its own. In a 2011 research paper he wrote that “out-of-body illusions” can be reliably produced with “correlated visual and tactile stimulation” (such as the facilitator squeezing my arm in real life just when the transketeer did so in the video).

Also crucial to the effect is the tight first-person viewpoint, achieved by filming the narrative with a 360-degree camera affixed to the forehead of the storyteller. “You are inverting the subject of the documentary,” says Be Another Lab’s Christian Cherene. “You are the subject.”

Mel Slater, professor at the University of Barcelona, researches virtual environments and their potential for lasting change. He’s found, among other encouraging results, that White people who virtually embody a Black body experience a sustained reduction in their implicit racial bias. Pointing out that while the technology is most popularly used for gaming in intriguing environments, Slater says the real power of VR is to “change the self, not just the place.”

With support from the Seattle Office of Arts and Culture, fearless360° has convened a Creative Exchange Lab at Pacific Science Center this summer. The pilot program brings together several immersive VR experiences focused on empathy and transformation, with different experiences (created by different teams) rotating in and out of the mix over the course of the season.

The Machine to Be Another (currently out of rotation) offered both body swapping and embodied narratives, while the remarkable “Tree” (on view into September, supported by Pacific Science Center) allows participants to grow from a seed into the tallest tree in the rainforest. As you sprout branches and stretch above the canopy, the beautiful view is augmented by organic scents and a breeze (courtesy of a fan). When loggers appear in the distance, it’s genuinely alarming.

During the Be Another Lab’s residency, fearless360° also took the Machine to Be Another around Seattle, sharing body swaps and embodied narratives with UW’s CoMotion Lab, The Grocery experimental arts space, Seattle Public Library and the Yesler Terrace artist residency. “We got out into the community and talked about the potential of the project,” says Cioffi. “What are the oral histories all around this city?” she asks. “How might they benefit from the embodied narrative concept?”

Fearless360° co-founder Gretchen Burger says now that she and Cioffi are trained in the technology, they are aiming to work with local organizations — such as Arts Corps, Reel Girls, Northwest Film Forum, the Shelf Life community stories project in the Central District — to record more personal narratives in the Machine. “The hope is to to record VR stories in these communities that would become part of a citywide Library of Ourselves archive,” Burger says, “which would then be part of the international Library of Ourselves.”

Before slipping into Jonah’s narrative, I had only thought about being transgender in an external way — a reality other people experienced, struggled with and celebrated. As a cis woman, I hadn’t ever imagined myself in a trans body, one that had undergone top surgery. But Jonah’s virtual story took me there on a physically resonant level. I experienced comfort in the arrival of the transketeers, and casual intimacy in the presence of Jonah’s partner as we sat next to each other on the couch in her apartment, our arms pressed snugly together. I felt the essential lifeline close friends and loved ones provide, especially when living inside a body that may not align with cultural expectations.

“It truly is different and transformative,” Burger says, of The Machine to Be Another. “Unlike any format out there right now, it’s media that helps us become human again.”