The ruling could threaten the pipeline’s expansion. 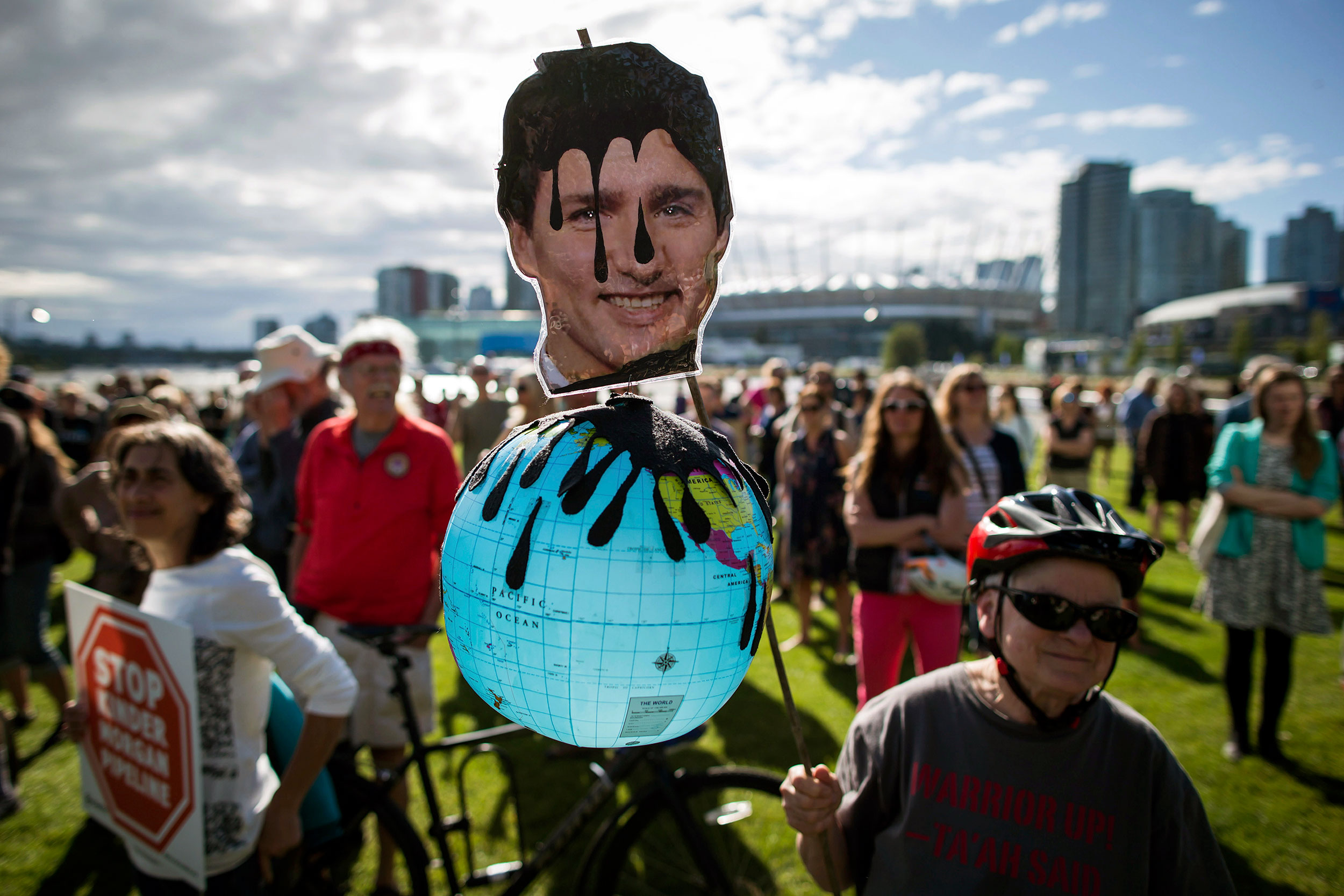 A protester holds a photo of Canadian Prime Minister Justin Trudeau and a representation of the globe during a protest against the Kinder Morgan's Trans Mountain pipeline expansion, in Vancouver, British Columbia, Tuesday, May 29, 2018. Canada's federal government said Tuesday it is buying the controversial pipeline from the Alberta oil sands to the Pacific Coast to ensure it gets built. (Darryl Dyck/The Canadian Press via AP)

The court found the National Energy Board review of the $7.4-billion project was so flawed it failed to provide the government with the information needed to approve the project.

The ruling is a major setback and raised the prospects of a lengthy delay that could kill the expansion. The court has ordered the federal government to include project-related marine shipping in its reviews and to redo consultations with First Nations.

Shortly after the ruling, Kinder Morgan shareholders approved the previously announced sale of the pipeline and expansion project to the federal government for $4.5 billion. The decision means the National Energy Board must redo major parts of its review, a potentially long process. “This ruling is a critical win for communities that stand to be affected by this risky pipeline project, for the climate, and for coastal ecosystems, including the endangered southern resident killer whales,” said Dyna Tytel, a lawyer at Canadian environmental law charity Ecojustice. The court cited two main failures.

The NEB didn’t consult with First Nations affected by the pipeline in a meaningful way, the court found, failing to engage in real discussion of concerns.

“The flaws discussed above thwarted meaningful, two-way dialogue,” the judgment said. “The result was an unreasonable consultation process that fell well short of the required mark.”

Chief Bob Chamberlin, vice-president of the Union of BC Indian Chiefs, welcomed the ruling.

“The project should never have been approved, and we are greatly encouraged that the Federal Court of Appeal has recognized the need for Canada to uphold Indigenous Title and Rights on projects on their territories, and fulfill their commitments to true reconciliation,” he said in a written statement.

And the energy board wrongly excluded the effects of increased shipping as a result of the pipeline project from its review, the court found.

That allowed it to claim there were no “significant adverse environmental effects,” a conclusion that was central to its report.

“With such a flawed report before it, the Governor in Council [cabinet] could not legally make the kind of assessment of the Project’s environmental effects and the public interest that the legislation requires,” the court found.

Seven First Nations opposed the approval in the Federal Court, alleging the government breached its constitutional duty to consult and accommodate affected First Nations and infringed on Indigenous rights and title.

“Each First Nation had a different concern,” said University of B.C. Indigenous law professor Gordon Christie. “But, they were all owed adequate consultation and accommodation.” For example, Coldwater Indian Band Chief Lee Spahan argued that the proposed pipeline route could increase the vulnerability of the community’s drinking water supply and would impact many culturally significant areas.

“The court has sent a clear signal that the rule of law will not accommodate environmental decision-making that fails to address these environmental risks,” he said.

Christie estimates this decision could delay the project by at least 18 months.

The project may face the same fate as the Enbridge Northern Gateway pipeline, he said.

The controversial project’s approval was overturned in June 2016, after the Federal Court of Appeal ruled the federal government had failed to consult with First Nations.

“If you can drag the project out long enough with successful delays, the project ends up not being viable.”

Editor's note: For more coverage, check out How We Got Here: A Tyee Pipeline Reader

Alastair Spriggs is an intern at The Tyee from the UBC Graduate School of Journalism.