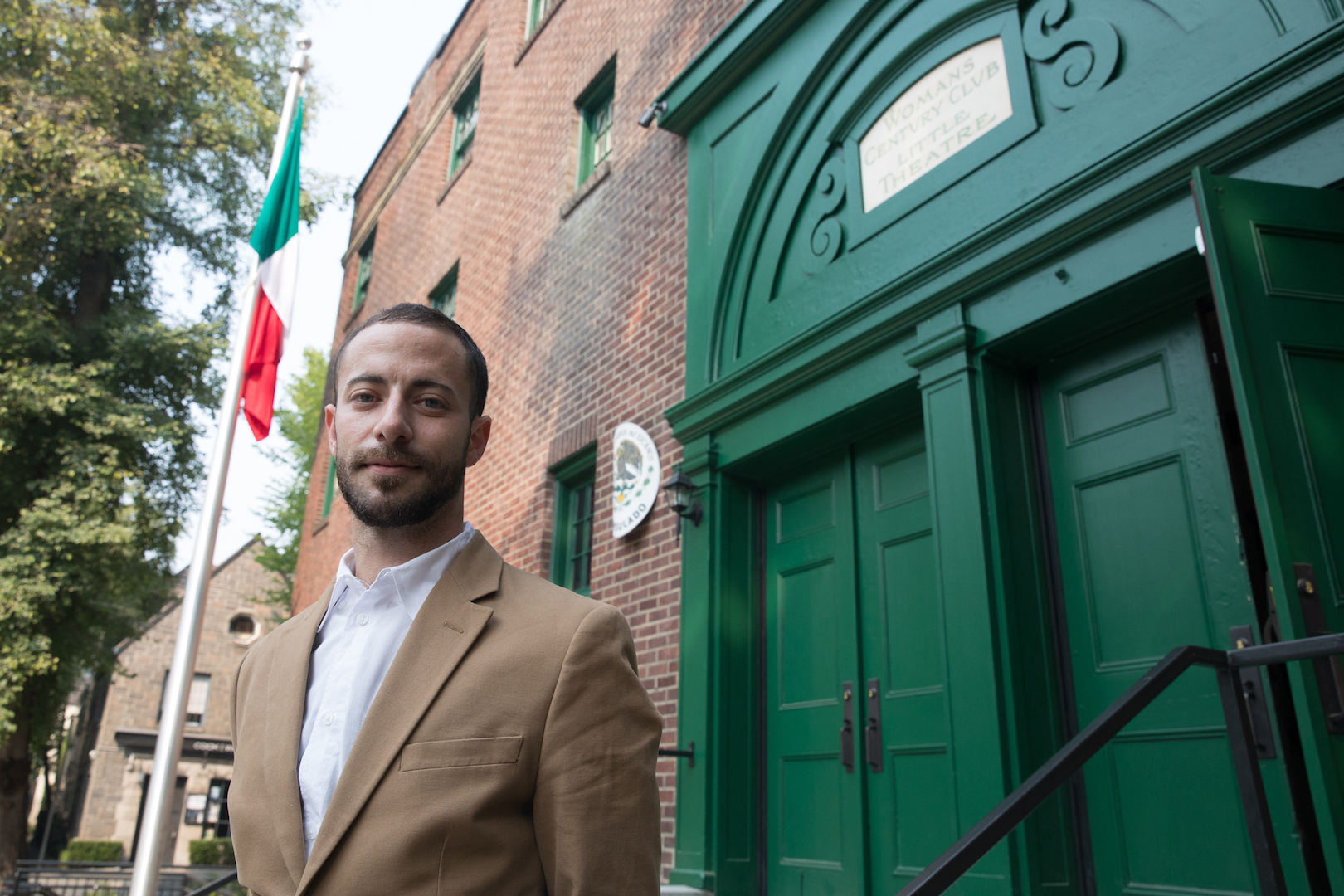 When Adrián Gómez was contacted last spring about a sculpture he had up at the University of Washington, he wasn’t sure what to expect.

Did somebody want to talk about his work? Purchase a piece? Gómez, a 24-year-old ceramics artist who had only recently finished his BFA at UW, hadn’t yet scheduled a show post-grad in Seattle. The piece in question, Niño de Oro, was part of a group exhibition at the Jacob Lawrence Gallery on campus.

“I didn't know what he was looking for,” Gómez recalls.

The person who was making the inquiry was Moises Himmelfarb, cultural attaché for the Seattle Mexican Consulate. And he was about to offer Gómez a two-month solo exhibition at the consulate itself for its second annual heritage celebration, MEXAM Northwest Festival, which opens today. Gómez’s show will also be the first of a series called “NosotrUS: Mexican-American Reflections on Identity,” with sculptor George Rodriguez as another artist in the lineup.

This might have once been an unusual form of outreach for the consulate. But after head consul Roberto Dondisch took office two years ago — with Himmelfarb joining shortly after as the consulate’s first full-time cultural attaché — the office has ramped up its cultural outreach, putting a focused effort in seeking local, Mexican artists to spotlight. Often times, Himmelfarb hunts for artists in person, visiting galleries and watching performances in search of the lesser known — like Gómez.

When the consulate moved from its old Belltown location last July, the pair took this as an opportunity to further its cultural outreach goal. The newly renovated consulate building, formerly the Harvard Exit Theater (and before that, the Woman’s Century Club) on Capitol Hill, was acquired and renovated with exhibition spaces in mind.

It now looks like this: a documentation room occupies the area where rows of movie theaters once sat; the room bustles with people seeking passport and visas. Where the movie screen once hung is now a small library and a meeting room. Sliding glass doors allow both spaces to be transformed into an art gallery. Essentially, the consulate building will live a double life, both as a place for formal consulate work and an exhibition space.

Himmelfarb now oversees the consulate’s new Mexican Cultural Institute, which is housed on the consulate’s first floor. It is one of only fifteen such offices in Mexican consulates around the world. The institute is already connecting with organizations located in the farthest reaches of the consulate’s coverage, like Anchorage, Alaska.

Himmelfarb hopes the Institute’s programming will broaden the perspectives of “those who have maybe a friendly view of Mexico, but it’s not nuanced. We want to deepen and engage and really cater to Seattle.”

Says Dondisch: “They might already love mariachis and they might love dancing, but they wanted to know about the contemporary Mexico. That’s what we’re trying to also bring.”

The consulate has also put extra effort in bringing Mexican artists to Seattle. Last June, it partnered with STG to bring Natalia Lafourcade, a singer well-known in Mexico for her folk-inspired series of albums, Musas, and recently popular in the U.S. for singing the Spanish-spoken part of “Remember Me” in Disney’s Coco. She performed at a sold-out show at the Neptune. Next month, the consulate is bringing popular Mexican ‘90s rock band Cafe Tacvba to the Moore Theater. Tickets for the show’s main floor sold out in five hours and the show was completely booked after two days.

Cafe Tacvba’s representative, Kevin Lawrie, wrote in an email that as the band embarks on a U.S. tour, they’ve found a large American audience awaiting them.

“It’s been surprising to see how people have responded to the energy of the band,” Lawrie wrote. Still, he said it shouldn’t be too much of a surprise, as the band sees Seattle as a place that “aids those who take creative risks.” Singing to audiences in a language they might not understand, for example, could be counted as such a risk.

But the state’s Hispanic population has grown quickly in recent years, currently numbering more than 800,000 — 12% of the state’s population. Eighty-percent of that number is people who are of Mexican descent.

“A lot of people don’t realize, all this way North, there’s so many Mexicans,” Dondisch says. “But it’s catching up. People are catching up to it.”

Adrián Gómez’s ceramic exhibition will be the institute's inaugural art show inside the consulate.

His work examines his identity as a Mexican-Guatemalan growing up in Seattle.

“I've always struggled with kind of identifying who I am, what group I fall in,” Gómez says. “I speak Spanish but I also don't look Mexican or Guatemalan” to some, he explains.

The artist hadn’t considered exploring the theme of identity in his art until he attended UW’s sculpture program. Growing up, most of his Latino friends were made at the Spanish-spoken mass he attended at a Seattle church with his family and not in the city or at school.

MEXAM NW will feature more than 20 events across the Greater Seattle region from Aug. 24th to Sept 20th.

“nosotrUS: Mexican-American reflections on identity” will be on display at the Mexican Consulate in Seattle, 807 E Roy St., Sept. 1-30. An opening reception will be held 7 p.m. Sept. 12.