The Interim Chief of the Seattle Police Department could become the new top cop on Monday. 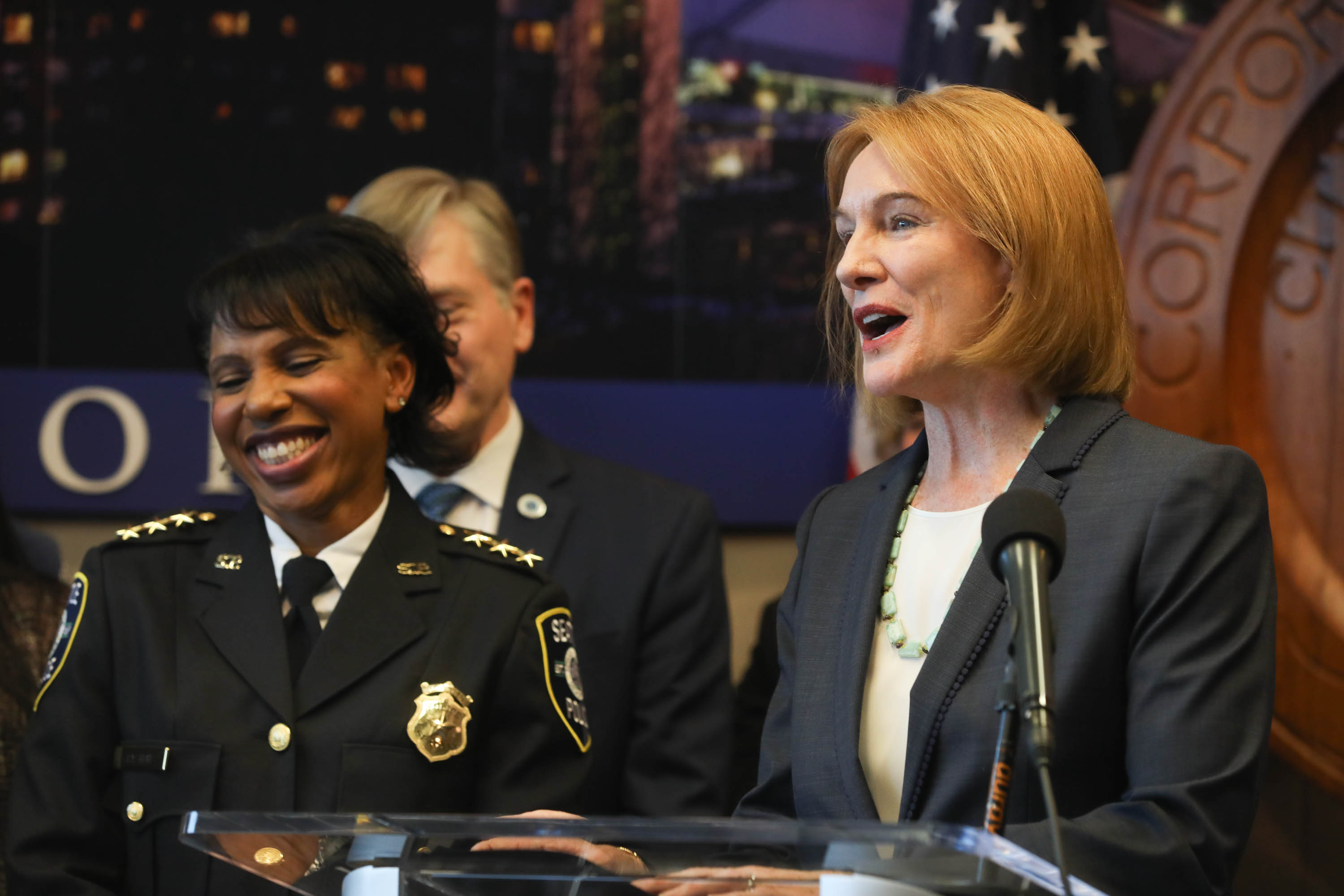 Mayor Jenny Durkan announces Seattle Police Chief Kathleen O'Toole will step down from her position at the end of the year during a press conference at Seattle City Hall, Monday, December 4, 2017. (Photo by Matt M. McKnight)

Interim Chief of the Seattle Police Department Carmen Best is one step closer to solidifying her place at the head of the city’s police force.

A Seattle City Council committee tasked with vetting the nominee, led by Councilmember Lorena González, voted 3-0 Wednesday to advance Best’s nomination following a morning of questions, in which council members quizzed Best on how she would run the department of nearly 1,500 employees. Her nomination will be taken up by the full council Monday, where it’s all but guaranteed she will win the support of the majority of the nine elected council members.

Her approval would be the result many expected last fall when Chief Kathleen O’Toole announced she was stepping aside after leading the department for just under three years. Best was O’Toole’s number two and was being groomed to take over the job.

But Best’s path to Monday’s vote was anything but expected. To the surprise of almost everyone, she was excluded from the list of three finalists that was released in May. But following outcry from community advocates and rank-and-file officers and the exit of one finalist in mid-July, Best was brought back into the running.

Reporters questioned Mayor Jenny Durkan on the unconventional process, but she was resolute that, in the end, she did not equivocate on choosing Best. “I have no question that Carmen Best is the person to lead our City’s police department as the next Chief of Police,” she said following the nomination.

Wednesday’s appearance was the final of four public appearances by Best since her nomination. Throughout the process, the council has lingered on what is arguably Best’s first priority: ensuring that the reforms implemented in response to a federal consent decree stick. After more than five years under a court-appointed monitor and federal judge — the result of a Department of Justice investigation that found the department used too much force — the department was found last January to have done enough to move on from the consent decree.

The department is now in a two-year wind-down period, during which it must prove that the reforms — to accountability processes, training requirements, use of force policies and more — are permanent.

Although not an official finding, the Department of Justice also raised the issue of bias within the police department. On Wednesday, the council honed in on questions of race, pushing Best to say how she would continue eradicating racism.

“Do you think that racially biased policing and excessive use of force are an ongoing problem in the police department?” asked Councilmember Kshama Sawant, pushing for a yes or no answer.

“I’m a brown woman just like you are,” answered Best. “It’s more complicated than that. … I think we’re moving forward on those issues. Do we still have a ways to go and work to do? Absolutely. But we are working really hard on creating a culture of innovation and new ideas within the police department.”

It wasn’t just Sawant who wanted to hear that Best was going to take on the darker side of policing’s history. “I think we should also look at the legacy of how capitalism has played a role in the institution of the police department as well,” said Councilmember Teresa Mosqueda. “Originally the police were created to protect property, not people. … As we have clearly articulated…[the council] is making sure that the expectation is to undo these isms, and I’m lumping capitalism in there.”

The Council Wednesday also questioned Best on the department’s approach to people in a mental health crisis, with an eye toward the death of Charleena Lyles, who was shot by two officers in her Magnuson Park home.

“I’m certainly looking for anything we can do to partner with mental health to have a better response to these types of situations,” said Best.

Best, who is a 26-year veteran of the force, comes in with an astonishing level of buy-in. The rank-and-file support her, including the occasionally combative Seattle Police Officers Guild. She’s held positions up and down the ladder, from patrol supervisor to public information officer to deputy chief and now interim-chief.

But she also has support from many members of the civilian Community Police Commission and other community-focused groups. After her exclusion, a number of leaders from historically Black churches and community organizers spoke up on her behalf.

Councilmembers González, Mosqueda and Rob Johnson all voted to send Best to the full council with a recommendation to approve. Sawant exited before offering her vote.