The century-old butcher shop that has become a Seattle staple 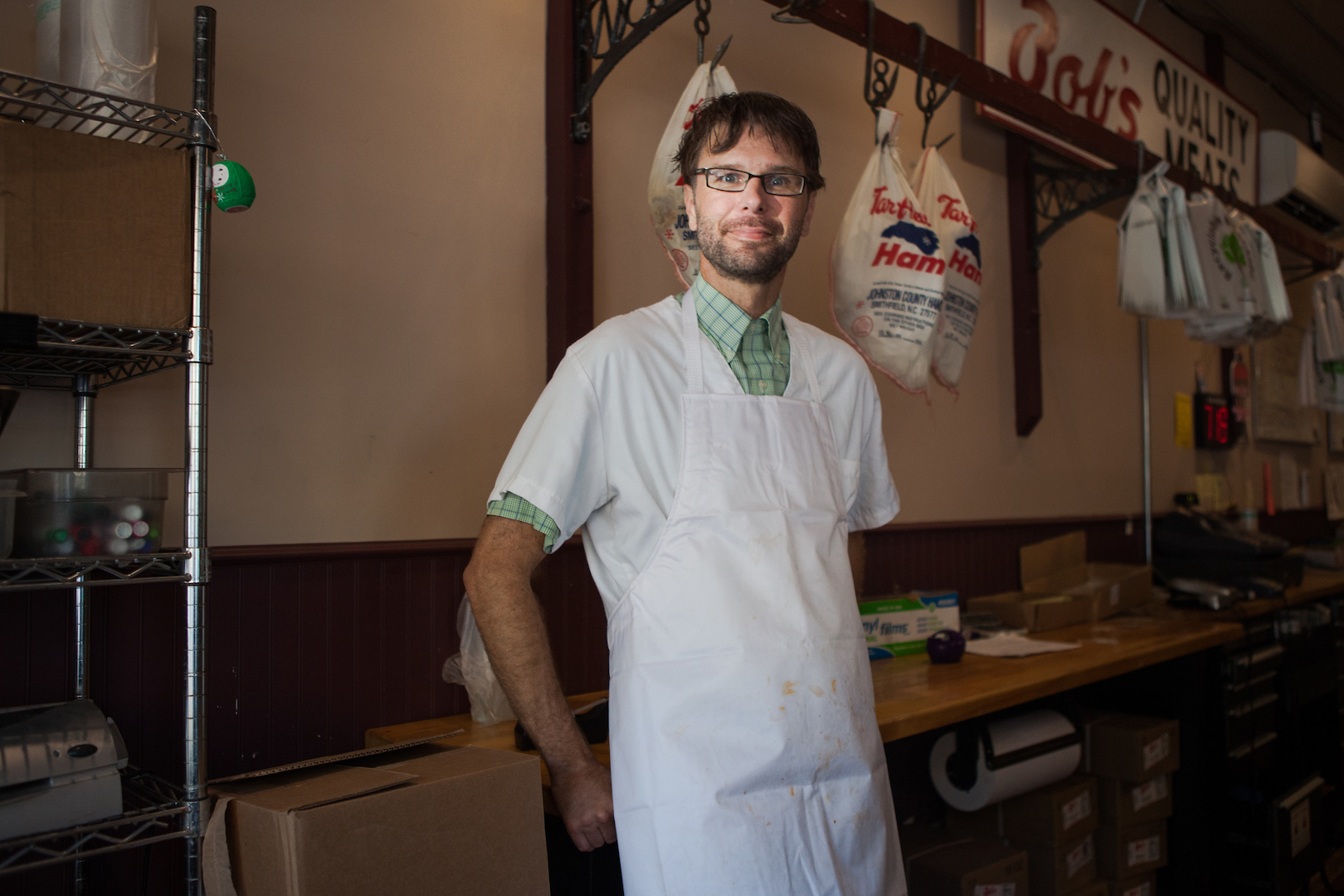 Abraham Ackley, manager of Bob’s Quality Meats, poses for a portrait on Aug. 9, 2018, in Seattle. Ackley’s father, James, owns the shop, and his grandfather, Bob, first opened the shop in the 1960s. (All photos by Jovelle Tamayo for Crosscut)

On a sizzling Wednesday afternoon in July, the swath of green space behind the historic Columbia City public library and a dapper Puget Consumers Co-Op is crowded with shade-seeking south Seattleites. The neighborhood's weekly farmers market has attracted a multi-racial throng. An African-American boy asks a White grillman about the intricacies of vegetarian cuisine; a mother calmly attempts to exhort her young, blonde daughter to come down from a tree.

Two blocks away at a neighborhood mainstay, the Columbia City Alehouse, Darryl Smith tucks into an imperial pint of pale ale as jazz and Motown emanate from the pub's speakers. Smith moved to the neighborhood in 1994. Before he worked as a deputy mayor for Mike McGinn, he was a realtor and community activist who participated in many of the commercial transactions that sparked Columbia City's revitalization around the turn of the 21st century.

This being Seattle, revitalization swiftly gave way to gentrification, as evidenced by the Rudy's Barbershop, Pagliacci pizzeria and Starbucks on Rainier Avenue, as well as a yoga studio supplanting Angie's, a woebegone neighborhood dive bar that catered mainly to Black patrons.

“It's a little bit of a good news-bad news thing,” Smith says of Columbia City's evolution. Back in the mid-'90s, he and his fellow neighborhood boosters would “squint and imagine when there were no businesses.”

"We don't long for those days," Smith explains. But now, he says, the neighborhood is "definitely a lot Whiter," adding, "We want people to come, but understand the history, the economic diversity." Smith is Black; he’s married to Andrea, who is White.

Folks could do worse than to walk across the street to Bob's Quality Meats. Upon entry, it's somewhat dimly lit and quaint for a butcher shop, with a long, glass case containing about every cut of meat you can imagine wanting to prepare. The shop's owner, James Ackley, has a soft spot for oxtail, in part because he grew up eating it when his dad, Bob, had trouble selling it. Upstairs is a cluttered storage area/office that served as James's residence for a short spell.

The shop was damaged by a fire in 2015, but was swiftly returned to its prior spartan glory through a grant from King County's historic preservation fund. Its sign indicates that it was established in 1909, which is sort of true. That was the year that Joe Ackley — James’s grandfather — opened his first refrigerated meat counter near Yakima. Before then, the shop owner recalls, Joe would "kill two pigs and a bunch of chickens" every morning, cutting the meat on a stump on the back of his wagon whenever a customer would beckon.

Bob and James moved to the Seattle area in 1963, opening the original Bob's Meats in West Seattle in '65. The family lived in Lynnwood; James, who worked alongside his dad every day, reckons he usually got all the way to West Seattle in about 22 minutes as a teen. But by the time Bob opened his Columbia City location in the late '70s, James, who studied horticulture in college, had moved back to Central Washington to grow cherries, apples and pears.

A predominantly African-American clientele sustained the Ackley family business in Columbia City throughout the 20th century. Bob's wife was from Texas and the Ackleys' traditional southern meat preparations meshed well with the tastes of the shop's regular customers.

“It meant a lot to people that he stuck around,” says Bob's grandson, Abraham, who is now in charge of the shop's day-to-day operations. “My grandpa saw that people were being underserved and he could deliver something to them. There weren't a lot of legitimate businesses down here in the early '90s.”

That was still true in 1997, when James purchased the business from his father.

“Even the working girls, they'd stop by every night and buy some meat to feed their families,” says James, adding how many of those sex workers eventually “became nurses or dental techs. I learned that stereotypes don't always fit.”

“The racial change is a huge deal,” says Abraham Ackley. “I think it's unfortunate that so many of our longtime customers aren't here anymore.”

The Ackleys, meanwhile, are “a typical southeast Seattle family.” (James and Abraham live a few blocks apart in Rainier Beach.) James's second wife, Tien, is Vietnamese, while Abraham married a Mexican woman, Rosa, with whom he shares a young daughter. As their family has diversified, so has their meat counter's offerings, which now feature an array of Asian marinades and Mexican sausages.

All of which tickles Darryl Smith, for whom Bob's is a portal to the neighborhood's roots.

“It's like the most Rainier Valley place left in the Valley,” says Smith. “When I see Abe behind the counter with Rosa and their daughter, I know I'm home.”

"That place matters. It really does."

This is the third piece in an occasional series on the places that embody Seattle’s character. Got an idea for a story? Email us at editor@crosscut.com or submit it to our story form.

The military surplus store that's a mainstay in Belltown