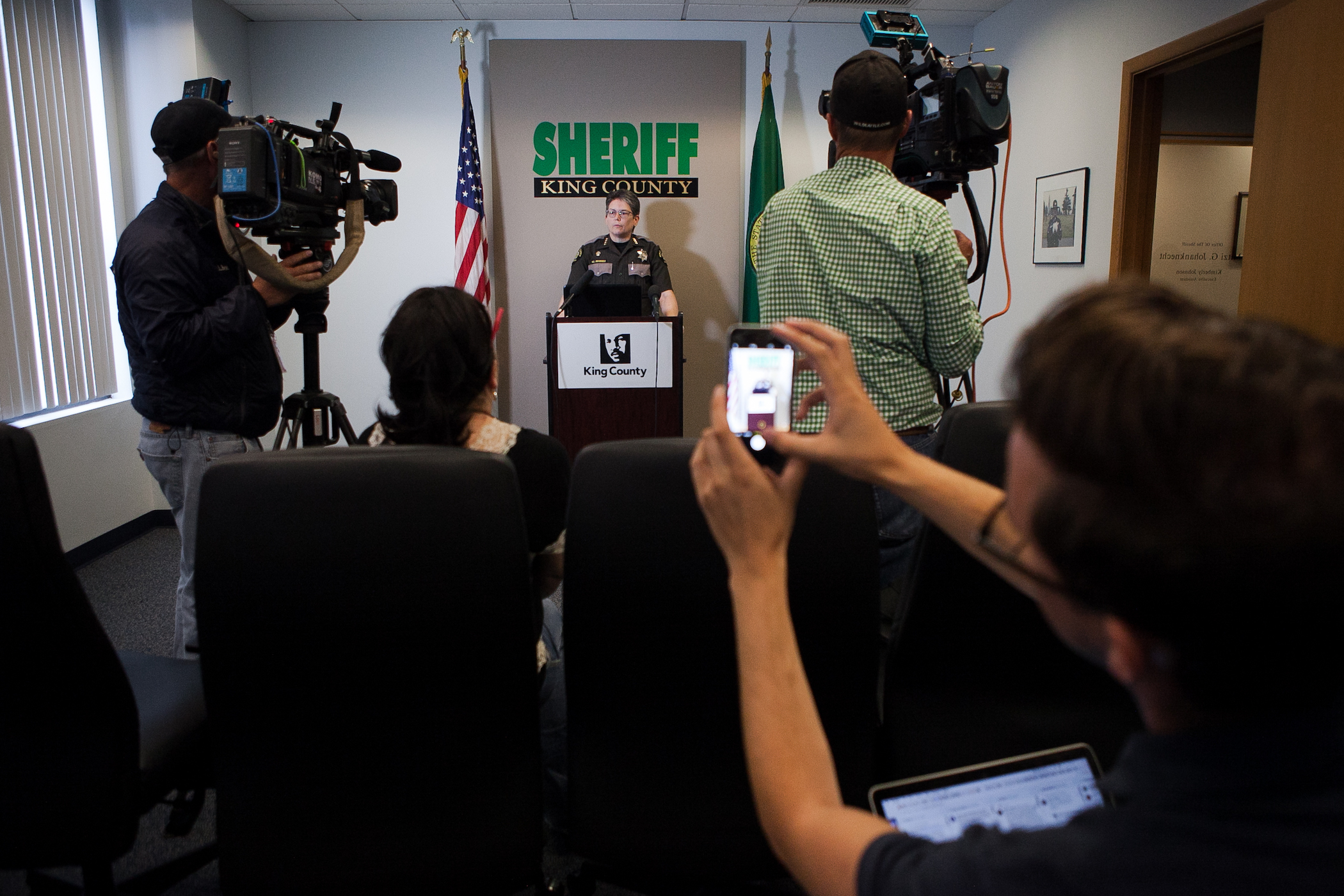 Sheriff Mitzi Johanknecht holds a news conference on Thursday, Aug. 2, 2018, to discuss the Automated Fingerprint Identification System (AFIS) levy that will appear on the primary ballot at King County District Court in Seattle. (Photo by Jovelle Tamayo for Crosscut)

For King County voters filling out their ballots for Tuesday’s primary election, Proposition 1 appears to be a fairly anodyne measure. The ballot guide provided by the county doesn’t even include an argument in opposition to the measure, which would fund updates to King County’s fingerprinting identification system.

The levy itself has existed since the fingerprinting system was first introduced in 1986 and the proposition simply sought the renewal of a longstanding property tax that had been renewed five times before. But the item on this year’s ballot is different from that of years past. As The Stranger noted in its primary endorsements, an amendment was included in the proposal, one that would allow the county to conduct biometric research that could lead to the implementation of future technologies, like facial recognition.

Have you voted yet?

If not, use Crosscut's election guide to fill out your ballot.

With this revelation, public concern over the possibility of surveillance quickly bubbled up, catching the attention of both the Automated Fingerprint Identification System (AFIS) management and King County.

And so King County Sheriff Mitzi Johanknecht quickly organized a midday news conference Thursday to address concerns over AFIS and to voice support for the levy that she hopes will fund it. Johanknecht wanted to make clear that the proposition does not directly fund facial recognition technology and that the sheriff’s office has no current plans to develop such a system. She warned that if the proposition was rejected the existing program would be reduced to a bare bones operation in order to reserve funds, adding that if the processing of fingerprints fell to the state, it would inevitably create a backlog.

Johanknecht, who took office in January, also said she was not involved in adding the amendment to the levy.

“It’s not something that’s strongly supported by us and we don’t know where the technology will go,” Johanknecht said before noting that biometric developments could possibly allow for improvements to facial matching already in use by King County law enforcement, such as when the sheriff's office attempts to match mugshots to security camera stills. The technology could also help local police departments in identifying leads in criminal cases, she said.

It was the King County Council that was responsible for adding the amendment to the proposition. According to Rod Dembowski, the King County council member who suggested the amendment, this is the first time in the levy’s history that such an addition has been included. While it allows King County to research other technology like facial recognition in the future, he said, it also promises that they’ll check with organizations like the ACLU along the way.

“The council central staff worked with the AFIS staff to ensure that as future technologies become available, that before they could be adopted, there would be a consulting process with ‘privacy advocates and experts’ to assess whether they should be adopted or used,” he wrote in an email. “I felt it was important to build in a privacy protection process as new innovations become available.”

Gillespie pointed out that the amendment is intended to explore the possibility of adopting these technologies. The actual implementation of such technology would require separate approval that would only come after an involved process.

“There’s a lot of steps,” she said. “We would have to present it to the council and work with the ACLU from the beginning.”

Gillespie said AFIS has worked with the ACLU before when implementing other additions to the program, such as “mobile ID,” and it plans to continue that process if the proposition passes.

She added that the amendment follows a national, even worldwide, trend.

“Many AFIS (fingerprint) systems are turning into ABIS (biometric) systems, to include multiple types of biometrics, not just fingerprints,” she said in a follow-up email. “So it's becoming very standard to approach these together.”

Councilmember Dembrowski did provide an email to Crosscut that his office sent to the ACLU in late February, supplying the attached amendment and a request for feedback.

"We are working on the attached amendment to the AFIS (Automated Fingerprint Identification System) levy renewal," read the email, sent by a legislative aide. "The amendment creates some flexibility for the department to explore new technologies. Councilmember Dembowski asked for a civil liberties perspective regarding the language we included in the amendment to protect privacy and civil rights. Thanks for taking a look."

Shankar Narayan, the ACLU-WA Technology and Liberty Project director, confirmed that the email was sent to his offices but that, due to staffing issues, the ACLU was unable to respond.

Correction: The original version of this story failed to note that Councilmember Dembrowski had attempted to notify the ACLU of the pending amendment prior to its passage. The story has been corrected. Crosscut regrets the error.