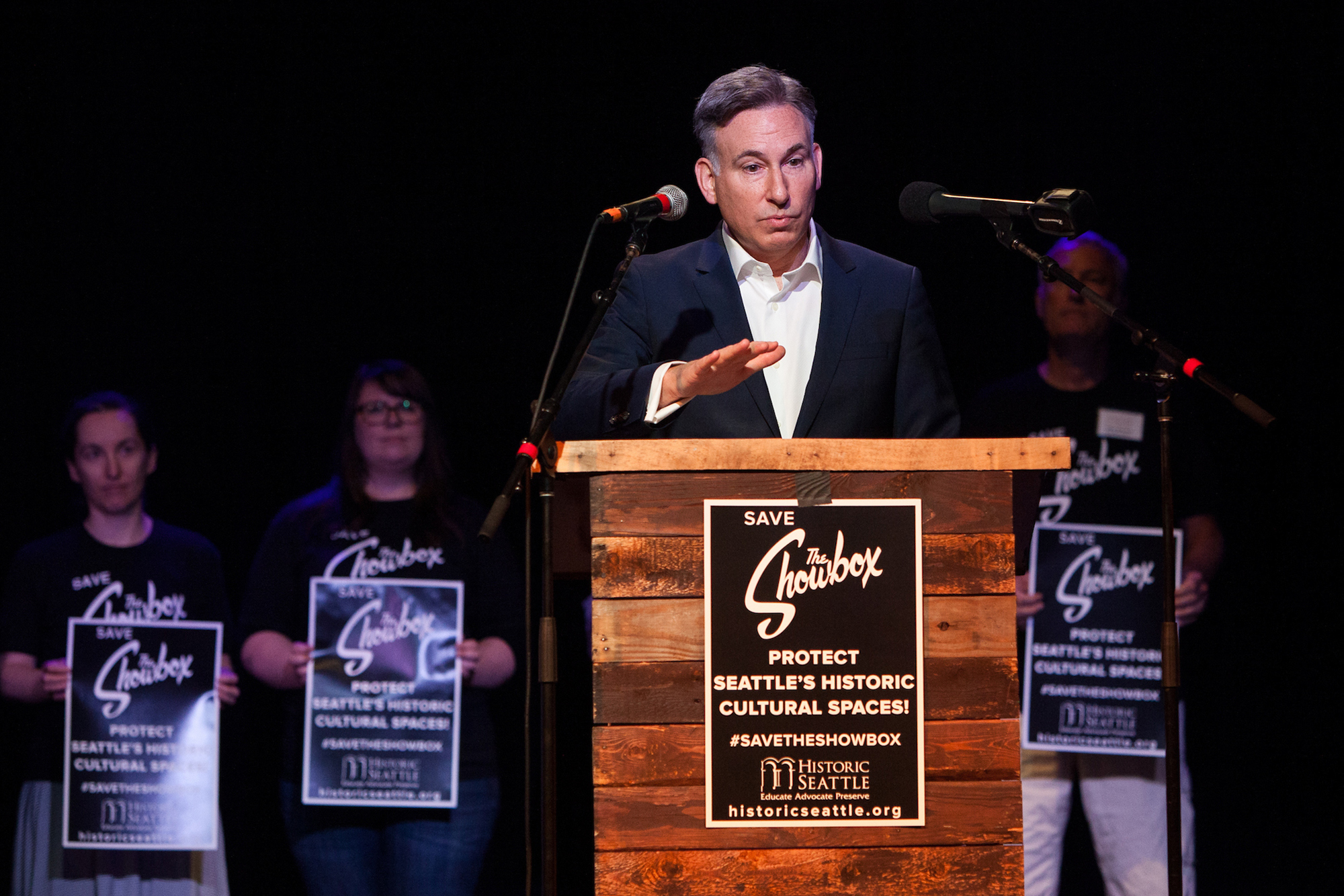 The proposal to tear down the Showbox has been a galvanizing force for much of Seattle. Big name musicians and more than one hundred thousand petition-signing residents have called for saving the downtown music venue. Politicians have gotten into the act as well. City Councilmember Kshama Sawant received plenty of attention for spearheading an ordinance that passed last Monday that grants the venue a temporary reprieve from the wrecking ball. The council plans to vote on a permanent fix next summer.

Meanwhile King County Executive Dow Constantine has been sharing his own thoughts about the future of the storied music venue. Last Wednesday he took to KEXP — where he once volunteered as a DJ when it was KCMU — to wax nostalgic about the Showbox and to share an idea for saving the building.

Speaking to DJ John Richard’s on KEXP’s morning show, Constantine first took a dig at what he said was an inevitable consequence of Seattle’s approach to development and growth.

“As the price of land goes up, if you have not thought ahead about what to do, you’re going to face these battles over and over and over again” said Constantine. “I really think the city has been way too casual about upzoning everything, which is great if it’s a parking lot or a building nobody cares about. But you end up putting a price on the head of the things people care about.”

The suggestion that Seattle has been too casual in its upzones set off a furor among Seattle’s urbanists and housing advocates who say the city needs to allow far more density to meet its massive housing demand. (Some of them have also argued that the fight to save the Showbox is one of misplaced nostalgia.)

The critics contend that the city has been quite modest about allowing increased density. The upzones have been limited to downtown, South Lake Union and within slightly expanded boundaries of the “urban village” cores of most neighborhoods. In total, just 18 percent of the city has been upzoned for bigger buildings while 69 percent still allow only single-family homes.

In an interview with Crosscut, the county executive said he was familiar with the critics and their defense of upzones, but stood by his statement.

“We don’t have to sacrifice everything that makes this place worth living in, in order to have housing and everything else we need,” said Constantine. “The constant impulse to destroy the things we love in order to achieve other things that are good needs to be resisted. We can have historic buildings and other cultural institutions and green space and still build plenty of housing and office space and the other things we need — we just have to be smarter about it.”

At a hearing on Aug. 13 to discuss the future of the Showbox, Councilmember Teresa Mosqueda expressed a similar sentiment about the dichotomy between cultural institutions and new growth. But she said saving those spaces requires zoning changes in the areas of the city currently dedicated to single family homes in order to allow more density and relieve the intense pressure on the 18 percent of the city that is taking all the new growth.

Constantine floated a different vision for saving these spaces during his interview on KEXP, one that would not require any zoning changes.

The County Executive proposed the utilization of a land-use tool called transfer of development rights (TDR), speaking confidently about the TDR's ability to do the job. It has, in the past, been used to preserve other arts and music venues. But 2018 Seattle is a very different place than the past. The TDR’s ability to save the Showbox will be a steep uphill battle, if it works at all.

Only a few types of properties can sell their development rights. In Seattle, designated landmarks, low-income housing developments, open space projects, and buildings with unreinforced masonry are eligible to sell their “air rights” — major performing arts venues can sell as well, though the Showbox doesn’t meet the minimum 2,000-seat requirement to do so. Because these types of projects are rarely as tall as allowed, they can sell their unused capacity. The TDR seller gets funding to pay for renovations or construction and the TDR buyer — assuming they’re building in a neighborhood that allows density bonuses — gets to build a slightly taller building, which makes the project worth more money. Once development rights are sold, the seller’s land cannot be redeveloped with a larger building.

Seattle has had a TDR program in place for about 20 years. It’s been used to fund the creation of the Olympic Sculpture Park and Benaroya Hall, the renovation of the Paramount, affordable housing renovation and more.

If the Showbox received historic landmark status — and that’s a big if — it would be eligible to participate in the TDR program. But even if it receives the proper status, there is no guarantee that the building would maintain its identity as a music venue.

TDR doesn’t dictate what a building must be used for. But Constantine said the ability to sell TDR credits would help make saving the Showbox more financially viable, noting that the venue’s location in the heart of downtown makes the property it sits on extremely valuable and anyone saving it as a music venue will have to pass up that windfall. His hope is that someone or a group of people interested in keeping the Showbox as a music venue would buy it from the current owner — a big ask given the $12.3 million value of the land — and that the TDR would help the new owner maintain the venue.

“You really ultimately need someone to own the place who wants to run it as a music venue,” said Constantine. “The TDR approach can help make the building financially viable. You need someone who wants to contract with the promoter and book the club on a regular basis to keep the scene alive.”

In addition to the difficulty of finding a buyer who’s willing to take a loss on a multi-million dollar purchase, there are several other big barriers in the way of Constantine’s plan.

First is getting the Showbox landmark status. A group of historic preservationists nominated the venue for landmarking last week. But Danny Westneat reports in the Seattle Times that a 2006 evaluation of the Showbox’s historical significance gave it the lowest marks on a scale of 1 to 4. The report authors say “This property exhibits minimal original or historic building fabric/features. . . . The building appears to lack sufficient physical integrity to convey architectural and/or historic significance.”

There’s also a question of whether developers would even be interested in buying the Showbox’s unused development capacity through TDR. According to Seattle Office of Planning and Community Development’s Brennon Staley, the city’s TDR program point person, there’s about eight times more TDR development capacity available from historic properties downtown than they think might get purchased by developers. In other words, the supply of TDR credits far outstrips the demand from buyers.

Staley says one way the city could breathe some life into the TDR program and make it work for the Showbox is to allow developers to build even taller buildings, giving them the bonus necessary to incentivize a TDR credit purchase.

Still, the path from an idea shared on KEXP to real-life solution is long and arduous. As county executive, Constantine has no legal say in the matter. But he said he’s ready to put in the work to make it happen.

“I will be talking to folks at the city as well as folks in the preservation community to make sure we’re doing everything we can to save the Showbox. It’s not easy, but it’s very doable.”