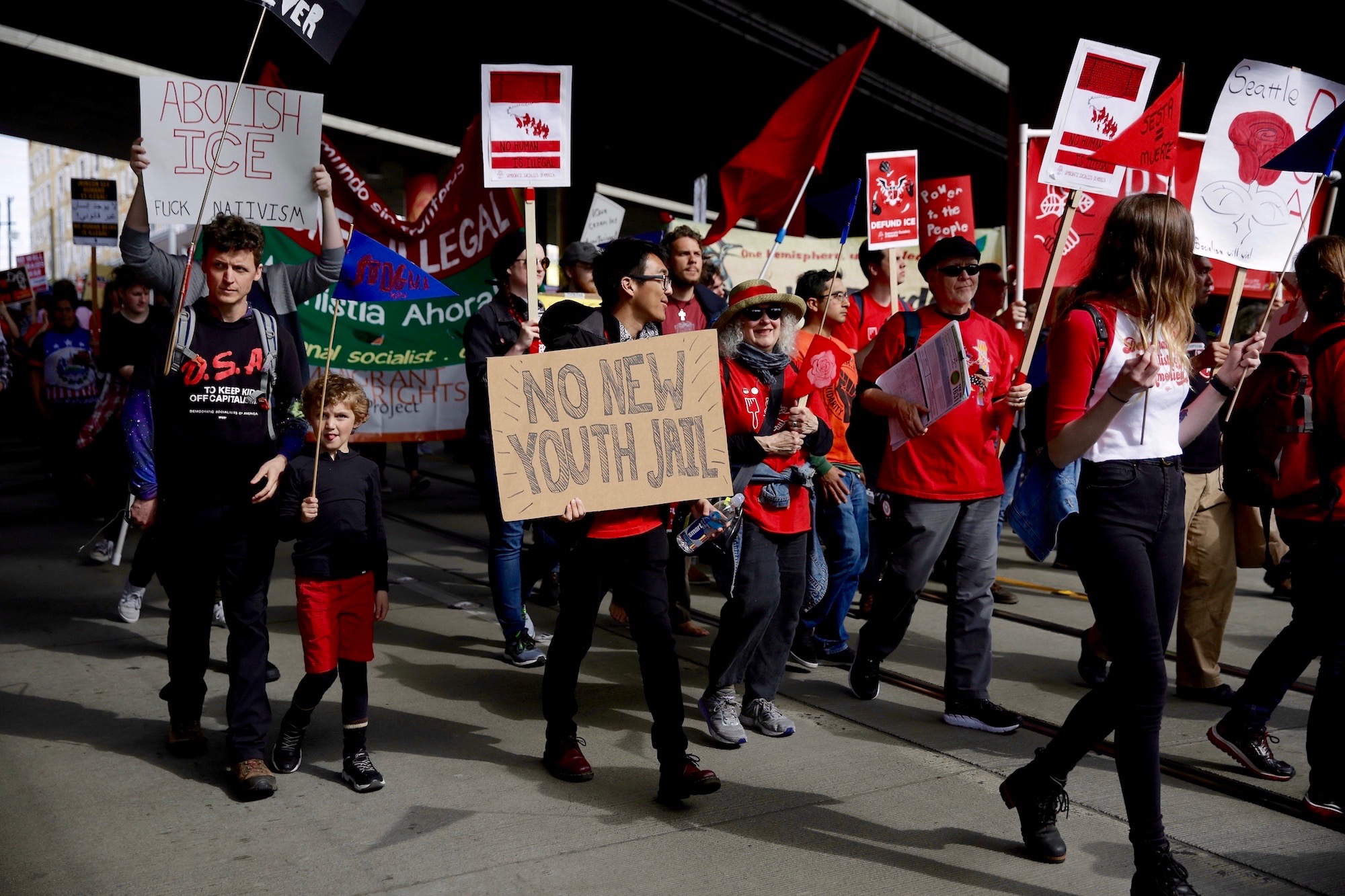 A sign protesting a new King County youth jail is pictured as people march down South Jackson Street during the annual May Day March for Workers and Immigrant Rights in Seattle, May 1, 2018. (Photo by Jason Redmond for Crosscut)

Shortly after she became interim director of King County’s Department of Public Defense, Anita Khandelwal did what her predecessor had not: She publicly opposed the county’s new Children and Family Justice Center — known to many as simply the “youth jail.”

Coming into the position in June, Khandelwal was under the impression she should take strong policy stances. In fact, she was told that the director before her, Lorinda Youngcourt, had been pushed out in part because of her relative silence on policy.

But now Khandelwal, who is seeking the permanent position, is getting backlash for standing in opposition to the county’s support for the new facility — igniting more tensions around an issue many public defenders see as vitally important to their work with younger clients and raising the question of the department's independence.

King County Councilmember Dave Upthegrove confirmed to Crosscut that he’d refused to meet with Khandelwal in response to her stance on the youth facility, which is already under construction. And Khandelwal and others say they've been told by sources that King County Executive Dow Constantine and Prosecuting Attorney Dan Satterberg, upon learning of her stance during a meeting on a separate subject, made it, in Khandelwal's words, “very clear that there was no way I would be appointed.”

Representatives for Satterberg and Constantine both denied that there had been any conversation about candidates for the permanent position or that anyone had been ruled out in advance.

The backlash prompted both the unions representing DPD employees and staff in the department to send letters of protest to Constantine, members of the King County Council and the Public Defense Advisory Board, a volunteer oversight body of the department.

The reported episodes have also sent the county’s legal community into a frenzy over what many view as a breach of independence. The highly controversial detention facility has unearthed a confrontation that’s been waiting to happen since 2013, when the Department of Public Defense — DPD — first became a part of the county.

In response to concerns at the time about the county muzzling controversial opinions from public defenders, officials drafted language meant to protect that independence. But in light of Khandelwal’s account, many of those same concerned voices are now questioning whether there is consensus regarding the extent of that independence.

Khandelwal took the reins of DPD in late June after Constantine told her predecessor, Youngcourt, that he would not appoint her to a second term. The decision was largely supported by the department’s staff as well as the 11 member volunteer advisory board, as the Seattle Times first reported.

Her appointment from policy and law director to interim director makes Khandelwal only the second head of the 415-employee department. It was created in 2013 after the Washington State Supreme Court ruled that members of four separate nonprofit public defense agencies could join the state's retirement system. In response, the county chose to hire many of the lawyers and establish DPD, ending its longstanding practice of contracting out defense work to nonprofit organizations.

But in a field like defense litigation, where lawyers often take controversial stands, turning public defense into a government department raised the specter that employees would be discouraged from voicing unpopular opinions.

“One of the main issues that I was interested in was, when we bring them in house, it was critical to preserve the independent voice and authority of the public defender function and shield it from political influence,” King County Councilmember Rod Dembowski told Crosscut on Wednesday.

So he and his colleagues did several things. First, they established the Public Defense Advisory Board, made up of volunteers. That board, most significantly at the moment, is responsible for selecting candidates to be the department’s director, from whom the county executive will select one, subject to council confirmation.

Additionally, the county included in its charter wording to protect the department’s work. In addition to its duties to provide legal defense,“The department of public defense shall also foster and promote system improvements, efficiencies, access to justice and equity in the criminal justice system,” according to the charter.

It continues: “Elected officials shall not interfere with the exercise of these duties by the department. …The department shall not have its duties, as established in this section, decreased by the county council or the county executive.”

That independence, however, has never really been tested.

After assuming her position in June, Khandelwal wasted little time taking public policy stances. She wrote a letter expressing concern about the positions on interrogation techniques by two of the finalists for Seattle police chief (neither was chosen). She also expressed support for changing state practices around youth bookings.

And she signed onto the “People’s Moratorium” — a movement opposing construction of the county youth facility, which will include support services as well as detention space. “The response since sending that letter has been challenging,” she said at a Thursday meeting of Public Defense Advisory Board.

Khandelwal told the board Thursday that, shortly after sending the letter, it was relayed to her that Constantine and Satterberg reacted harshly to her stance and that her chances of getting the permanent position were sunk. She said she had heard about the response from someone she trusts in county government.

A spokesperson for Satterberg said in a statement, “No conversation took place and especially no conversation would take place about any special candidates.”

Additionally, Khandelwal said she was scheduled to meet with Councilmember Upthegrove, who chairs the council’s budget committee, but that he cancelled after she took her stance.

In an interview, Upthegrove essentially confirmed her account. Khandelwal came to his office lobby, he said. But instead of inviting her in for a planned discussion of the budget, he came out and refused to meet because of her “stunt” opposing the facility.

“I don’t like to have county dollars spent to try to work against adopted county policy,” he said. “It’s not just for her position, but more how she conducted herself politically to not give anyone a heads up that the department would take this stance. It was unprofessional on her part.”

“I respect the independence of that office as provider of the law, but that doesn’t mean when they politicize the office that it doesn’t harm personal relationships, and it doesn’t affect perception.”

Upthegrove said that, if she’s forwarded to the council as a nominee, he would not vote to confirm Khandelwal. “I don’t think she has the support to be confirmed. It's not for taking the position, it’s for how she conducts herself.”

For the staff of DPD and members of the advisory board, taking a stance on the detention center is part and parcel to their advocacy for their clients. As Khandelwal told the Public Defense Advisory Board about what she perceived to be happening to her, its members and and others observing the meeting grew heated.

“Independence in this situation is clearly not complicated,” said Jeffrey Robinson, ACLU deputy legal director and director of the Trone Center for Justice and Equality. Addressing Khandelwal, Robinson said, “As a woman of color in this organization for you to be treated this way says something about our county process that is really concerning. … This board has to do something to ensure that the way you’ve been treated is addressed. Because I think it’s illegal.”

Sade Smith, an attorney with DPD, said she was proud of Khandelwal. “I don’t know who we are if we don’t stand up to this,” she said. “That letter was not in anyway inappropriate.”

The posting for the position is open until Aug. 31.

Moving forward, the board generally agreed they needed an “aggressive” response, although it was unclear exactly what that would be. And it was clear that Khandelwal enjoys broad support — later Thursday, about 60 staff of DPD met to discuss what they wanted in a new director. The consensus was largely, if not Anita Khandelwal, someone like her.