How climate change is messing with your mind

With fires and smoky skies, climate change is altering our physical landscape. But it’s modifying the mental landscape of the Pacific Northwest, too. 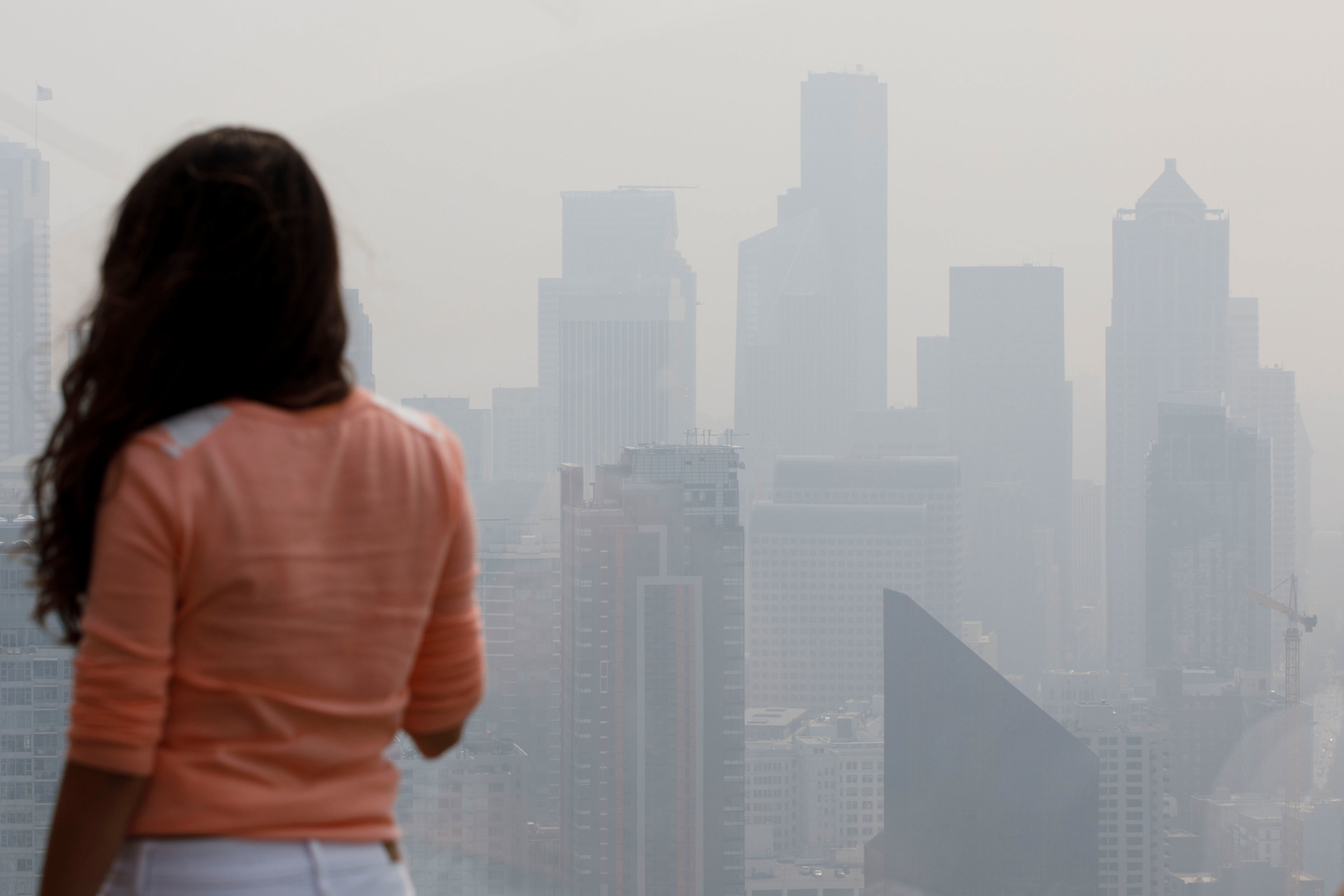 A woman looks at the skyline from the Space Needle observation deck on Monday, Aug. 20, 2018, in Seattle. Haze from wildfires caused a decrease in air quality in the area. (Photo by Sarah Hoffman/Crosscut)

Climate change has a unique flair for challenging our notions of predictability. Wildfire smoke fills our skies and blots the horizon in ways that feel worse and more frequent. And when the skyline reappears, we barely have time to count the fires dotting the rest of the map before it smogs up again. Swap seasons and we’ll be talking about hundred-year floods or lack of snowpack: Jarring, spasmodic nature is already good at chastening our expectations. Climate change makes it worse.

In the Northwest, we expect something to burn during fire season. Ecologically, it’s best this way; regular fires breed healthy forests. But the irregular fires are unnerving. When smoke from British Columbia — from California, from freaking Siberia — makes its way to Seattle, we squint at the change. Our heads shake: This is not the mountain view we know. Look at all the choking. Tahoma is missing, gone into hiding. And we go into mourning.

When smoke blots out a mountain, how many of us living in its shadow feel something else disappear? How are we supposed to Live Like the Mountain is Out when the peak is in purgatory?

It can feel like minor grief: a sad cloud over a single day or week. But imagine if it wasn’t smoke that made the mountain disappear — consider, for example, the case of mountaintop-removal mining, where the peaks are gone forever. As with any other bereavement, sharp and sudden loss can leave us at risk for major depression. A mountain is a spouse we all lose. This grief ought to interest us, and not first because it suggests another line item to add to the climate-change-damages balance sheet. Most immediately, it helps us connect the dots between environmental degradation and mental and neurological health. And at a distance, it helps understand how climate change can alter entire cultures.

When I was grad student in neuroscience, I spent most of my time modeling the dynamics of individual neurons. Rarely did I think about how these neurons interacted with their broader environments. But climate change is the thing that forces us to reckon with those omissions. The climate has changed, it continues to do so, and people are already facing the consequences. We seem to have grasped how a changing climate can impact physical health. What better way to humanize climate change than to think about its impacts on the organ that humanizes us?

The literature supporting these relationships is growing. In his book The Great Derangement, Amitav Ghosh takes a break from fiction to argue that the unpredictability of climate change — its corresponding rejection of bourgeois regularity, its uncanniness, its reminder of powers outside our direct control — offers cause for considering that “nonhuman forces have the ability to intervene directly in human thought.”

The claim is not as fantastical as it sounds. Indeed, we can go a step further. With fire season here, west of the Rockies, Ghosh’s words are confirmatory. The internal haze we feel — the one reflecting that hazy landscape — is no fluke. A changing environment does more than act on this abstract thing we call “human thought.” It also acts on the brain matter responsible for mental illness. And as climate change comes home to roost in the Pacific Northwest, we’re all getting sicker.

Think Seasonal Affective Disorder on OxyContin. These are dulled and subtle forces, but they are measurable, and they are everywhere. In Washington, the mountains are fuzzed out and we feel sad; in West Virginia, the mountains are decapitated in service of a mining operation — and major depressive symptomology increases one-and-a-half-fold. It’s time to take these ostensibly intangible effects seriously.

I know what you’re thinking: Discussions of mind–environment interactions are often smudged by the kind of hand-wavy psychology that brings to mind patchouli incense and misuse of the word “quantum.” But to connect with one’s environment — to connect with anything — is a question of quantitative and qualitative empirics. Experimental neuroscience and careful economics, for example, offer methodological toolkits readily applicable to questions concerning the relationships between environmental change, brain health and identity.

And researchers are applying them. Last year, in Finland, clinical neuroscientists and pharmacologists concluded the increased crime rates they’d pegged to higher temperatures were partially mediated by serotonin transmission. In a study of 10 million U.S. PSAT takers, economists from Harvard, UCLA, and other institutions demonstrated that, “Without air conditioning, each 1° F increase in school year temperature reduces the amount learned that year by one percent.” Scores of researchers have demonstrated the causal links between particulate matter and dementias like Alzheimer’s. Climate change and environmental degradation act constantly and decisively on brain chemistry, cognition and mental health.

The twinge you feel, searching for the Mt. Rainier you know? It’s the effect of neurochemical changes prompted by a lack of recognition — or, perhaps, as Ghosh would argue, from a recognition of the nonhuman forces we’ve so readily discounted. You’ve changed, just a little, in your noggin. And consider for a moment that we’re just talking about pretty views and scratchy throats thus far. That pang is nothing next to the literal unmooring and rewriting of identity that occurs when, say, the climatological effects on nearby river conditions force you to abandon the practice of subsistence fishing your family has relied upon for centuries.

In the halls of neuroscience, identity formation is generally understood to encompass three distinct processes: recognizing the self, establishing independence and affiliating oneself with groups and practices. Behind these processes is a tangle of neuronal pathways we have yet to completely decode. But the state of the science hasn’t left us completely in the dark.

In the face of a charred forest, a guillotined mountain, a parched field that once reliably nourished: identity slips. To blot out a landscape is to interrupt a rhythm, and it is rhythm through which an identity remains static. If neuroscience can claim any fundamental truths, one is that learning and memory are rooted in newness and surprise. Slot machines activate the neural pathways of addiction precisely because we can’t predict which pull garners the jackpot. Little surprises along the way keep us coming back. We most easily remember the improbable. When it comes, we change.

Our understanding of regularity, which Ghosh details as having been born in the Enlightenment and buoyed by the bourgeois lifestyle, represents a way of thinking about the world that’s new, relatively speaking. He argues the idea of a life governed by slow, plodding predictability — as understood by the modern novel and the nine-to-five — hinges on a set of assumptions about the world that the world ultimately and continually disproves. Anthropogenic climate change, like asteroids and plagues before it, gives our furtively chaos-bound world a heroic dose of crystal meth. When we build coastal properties, we operate under the assumption they will not be struck by tsunamis. When we over-leverage ourselves with an all-too-easily-attained McMortgage, we assume the housing market will continue to climb. Oops.

To fail to imagine that immersion and investment in place can viscerally, measurably change one’s biophysical relationship to it and to oneself is a sad, all-too-common myopia. But mostly this failure of imagination can be pinned to a lack of language; to a set of prevailing cultural and probabilistic assumptions about the way the world works. Grappling with climate change means grappling with the way we understand our expectations — which is perhaps another way of saying the way we understand ourselves.

And in Seattle and the greater Pacific Northwest, that means understanding our charmed little climate refuge won’t hold for long, if at all. Of course, we have a head start at that internalization: Anyone can feel it working. Look out the window.