Is landmarking a building all a facade?

It'll take a village to save Seattle's historic Showbox Nightclub. 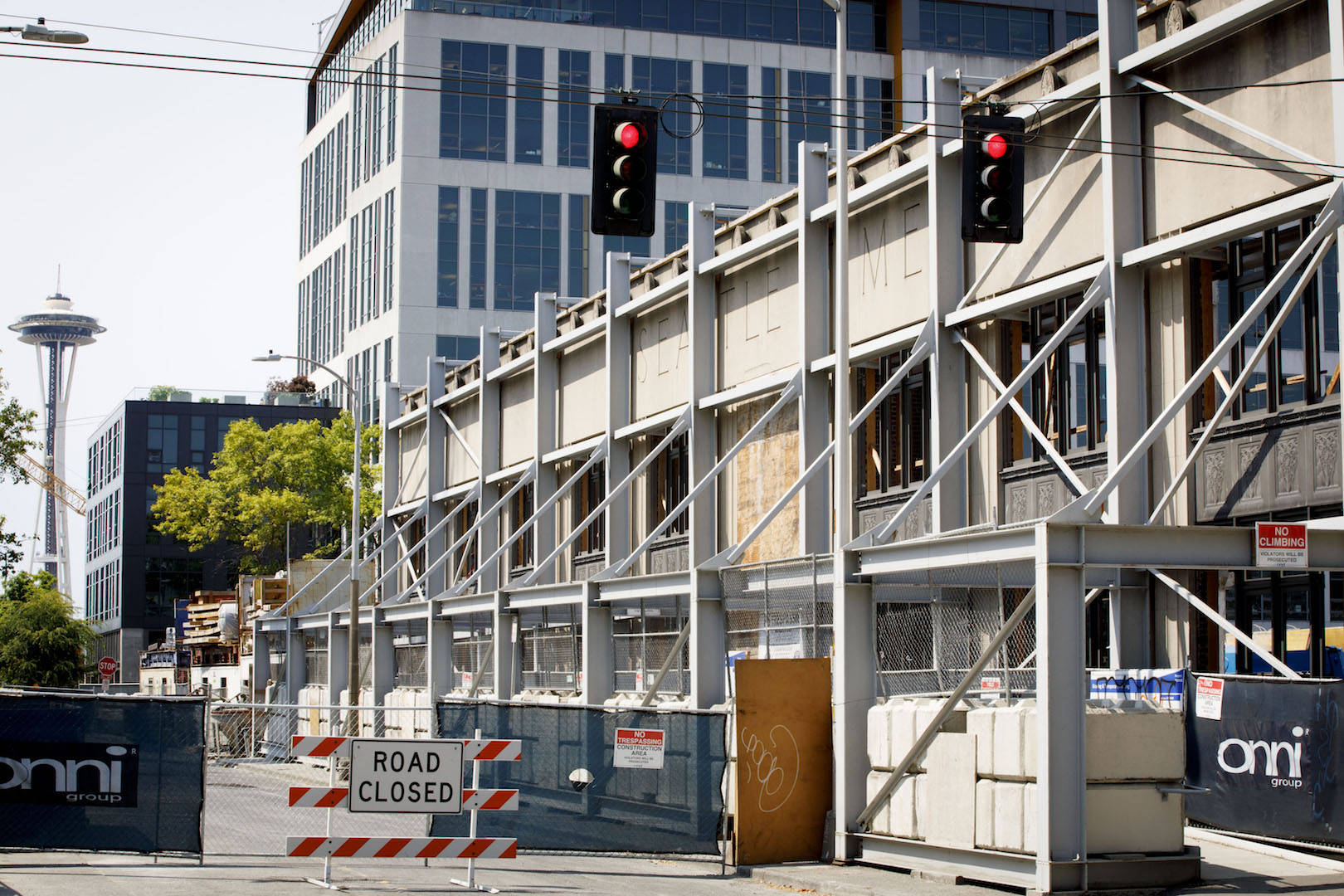 The original Seattle Times building at 1120 John Street in South Lake Union. Onni Group is preserving its facade while redeveloping the property. A double 400-foot tower is slated for the site. (Photo by Mason Bryan/Crosscut)

“We all woke up Wednesday and — Yah!” says Eugenia Woo of Historic Seattle. She’s referring to the shock of learning of plans last week to demolish the legendary Showbox nightclub on Seattle’s First Avenue and replace it with a $100 million 400-foot high-rise.

The jolt went beyond those in the business of historic preservation, but rippled across a city already traumatized by changes in the physical and cultural landscape brought about by rapid growth. The music community spoke out, online petitions popped up and King County Executive Dow Constantine promised to battle to save the club that has hosted performers ranging from Duke Ellington to Pearl Jam.

“I haven’t seen another time in this city when people have come out of the woodwork and drawn a line in the sand,” observes Woo.

This week, Historic Seattle announced that it is working with the Showbox’s operators, AEG, and with Vanishing Seattle and Friends of Historic Belltown to save the Showbox. “We want to find a possible solution,” she says. Historic Seattle has experience in saving buildings, including performance spaces like the Central District’s Washington Hall.

Saving the Showbox could be tricky. The developer, Onni Group of Vancouver, B.C., says it will submit a Seattle landmark application — standard practice for structures that might be eligible, and the Showbox is on the eve of celebrating its 80th year. Onni is also the developer of the site of the old Seattle Times building where only the historic façade was saved from demolition.

But landmarking the building is no panacea. For one thing, the Showbox might or might not qualify due to architectural changes to both its exterior and interior. Second, even landmarked structures can be demolished if it’s proved that landmark status would create a financial hardship for the owner. The fabled Music Hall, a treasure of an entertainment venue palace that once stood at 7th and Olive, was landmarked twice (one in the ‘70s and again in the ‘90s) and was still torn down in the end.

Another problem: landmark nominations submitted by a developer can be skewed and put forward in hopes of rejection. To counteract that, the public can weigh in with comments to the city’s Landmarks Preservation Board, but the nominator usually has the advantage in terms of the narrative.

Lastly, the landmarks ordinance does not protect the use of a structure. You can save the roof and walls, but not music or dancing and fun that goes on inside. This can be a problem for performance facilities — stadiums, arenas, nightclubs, dive bars, galleries — that are gathering spots and might be culturally important to a neighborhood, a city, a specific population, but our memories and experiences are too intangible to be preserved by law.

Trying to broaden protections of such intangibles is recognized at international levels. UNESCO, the United Nations organization that protects world heritage, advocates for preserving performance spaces. “In the performing arts this includes musical instruments, masks, costumes, and other bodily decorations used in dance, and the scenery and props of theatre. Performing arts are often performed in specific places; when these space are closely linked to the performance, they are considered cultural spaces,” according to the UNESCO Convention on Intangible Heritage and the performing arts.

Few cities have come up with successful strategies to protect use. Donovan Rypkema of PlaceEconomics, a preservation consultant who has worked with revitalizing Pioneer Square and historic business districts around the country, says the main attempt he’s aware of is San Francisco’s Legacy Business Registry, an effort to register classic, longtime city businesses and help them with lease agreements and grants to keep them in business. Businesses on the registry include record stores, performance halls, ice cream shops, bars, galleries and others that add longstanding richness that might otherwise be run out of town — or shut down.

Seattle has studied whether it could do something similar, an initiative push by City Councilmember Lisa Herbold. The study concluded that state law, which restricts government grants to private, for-profit business, would take away one of the major tools San Francisco has. More study was recommended.

Short of subsidizing businesses, sometimes deals can be struck to save structures that are not landmark worthy but important. The Blue Moon Tavern in the University District — where poets Richard Hugo and Theodore Roethke, beatniks and other colorful characters hung out — was threatened with demolition in 1989 and was rejected as a city landmark. However, public outcry, led by the legendary Walt Crowley, a dedicated Mooner, resulted in an agreement to keep the Moon going with a long-term lease that doesn’t run out until the 2030s.

Another example: churches cannot be landmarked against their will, our State Supreme Court has ruled. Therefore, the First United Methodist Church downtown was slated to be destroyed, but public outrage and leadership within the political and preservation community (then King County Councilmember Dow Constantine and developer Kevin Daniels) resulted in a major high-rise project that through compromise also preserved the historic sanctuary.

Win-win scenarios are possible with the right owner, public pressure and the will to make something work.

People disagree about what the Showbox controversy means. “I do know that Seattle without music clubs or record stores or movie theaters or bookstores or single-story coffee shops is not a Seattle that future residents will fall in love with,” wrote Charles Cross, music author and former leader of Seattle’s late music newspaper The Rocket, on Crosscut.

Countering that, Josh Feit, in a column at The C is for Crank blog, argued that the benefits for housing from the fees the developer would pay for affordable housing would be more valuable to the city than the music club. “The outcry to save the Showbox is just more nostalgic pique from a public in the throes of anxiety about change. Preserving memories is not the job of cities. Successful cities are the ones that constantly build new memories. The simple secret to doing that: Stop living in the past.”

It doesn’t have to be an either/or situation. Preservation of the Pike Place Market, across the street from the Showbox, was an effort to save a public treasure but also preserve low-income downtown housing. It was about protecting a complex urban eco-system from being destroyed through “urban renewal.” The formula has worked exceptionally well. Preservation and urbanization can work together, meaning you can have your high-rises and your culture spots too, with planning and cooperation and respect.

Memories, like those spawned at the Showbox, span generations, from the Great Depression to Macklemore. Great cities work to keep those links intact, especially while they grow.