Stakeholders brought together by Gov. Jay Inslee will discuss how to save a local population of killer whales. After the recent death of a newborn calf, the world is watching. 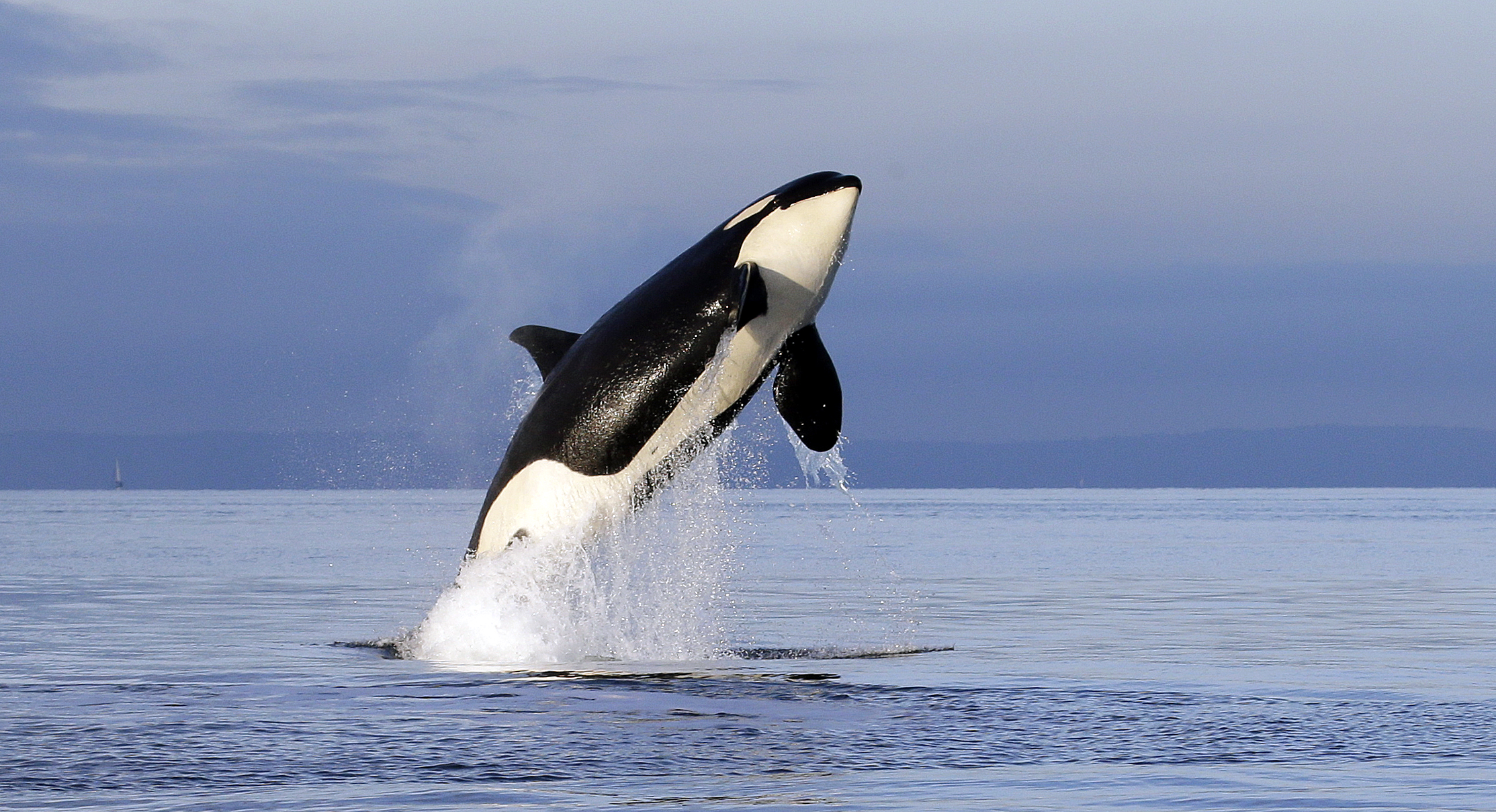 An orca from endangered J pod breaches west of Seattle on Jan. 18, 2014. (Photo by Elaine Thompson/AP)

When Gov. Jay Inslee convened a task force in March to address the declining population of southern resident killer whales, the situation already seemed urgent. Years without a successful birth had pushed the population to its lowest in decades. But the recent death of an endangered orca calf near the Washington coast broadcast that urgency throughout the world.

International attention has focused on a mother orca named J35 who for more than a week has carried the body of her calf in an apparent act of mourning. The calf died shortly after its birth on July 25, and the heartbreaking images of J35 lifting the tiny orca’s lifeless body to the water’s surface over and over has brought public awareness to both the threats these orcas face and the complex emotions large marine mammals are capable of.

The task force will meet Tuesday in Wenatchee to hear from its three working groups about the effectiveness, costs and feasibility of a range of proposals. Those solutions are targeting three big problems: reducing contaminants in the orcas’ habitat, reducing interference from shipping and increasing the salmon stocks the whales need to survive. For those advocating drastic changes they say are necessary to ensure the orcas’ survival, the iron couldn’t be hotter.

“There’s certainly increased focus on them right now with the tragedy with J35 and their calf,” said Colleen Weiler with Whale and Dolphin Conservation. Weiler isn’t on the task force, but her group is part of the Orca Salmon Alliance, which is represented. “I think there is definitely an opportunity for the task force to make some real changes for the southern resident orcas and the salmon, but from what I’ve seen so far, they’re a little hesitant to tackle some of those difficult conversations. When Gov. Inslee started the task force, he said nothing is off the table. But so far the task force has kind of stayed away from some of those really controversial topics.”

Namu, the first live, captive orca was displayed on the Seattle waterfront in 1965. In this episode of Mossback's Northwest, Knute Berger charts the rise and fall of the whale that would come to define our relationship with orcas.

Most of the controversy involves their food. This fish-eating orca population, unlike the mammal-eating transient killer whales that share territory in the Salish Sea, is at its lowest numbers in decades and hasn’t had a calf survive in three years. The 75 animals in the three southern resident pods travel up and down the Pacific coast chasing salmon. They’re beset by a host of man-made problems, but the most pressing might be a lack of prey. As more urgency surrounds the efforts to help them, eyes are now shifting to Inslee’s new task force.

With so much attention focused on them, committee members must decide if in their first year they want to tackle controversial measures like removing four dams on the Snake River or killing off competing pinnipeds like sea lions, which could boost salmon stocks.

Some members of the task force hope to keep pressure for action on. The Orca Salmon Alliance will hold a media event during the task force meeting to present 43,000 signatures on a letter calling for “bold, effective and measurable actions for orca recovery.” Weiler said her position is no proposal should be off the table.

But these measures will draw stiff opposition. Even proposals that fall far short of removing dams, like plans to increase the spillover on the Snake River to help salmon smolt make their way downstream, are controversial because of their potential impact on irrigation and power generation.

Laura Blackmore, deputy director of the Puget Sound Partnership and a task force member, praised the group’s work so far and said she thinks the members can likely work through most of the thornier issues, including how to curb predation of salmon by other predators like seals and sea lions. But she said it might make sense to sidestep the Snake River dams this year.

“I think one of most controversial things that will come before the task force is whether we should recommend removal of the Snake River dams,” Blackmore said. A lot of people think taking those dams out would be highly beneficial for orcas. And there are people who question whether that would have so much impact. It’s certainly possible that the controversy over that could swamp some of the other things.”

The task force has two meetings in August before it makes a draft report to Inslee in October. Its final report will go to Inslee in November, but it will continue to meet in 2019.

While the committee’s recommendations are advisory, they’re expected to carry weight both with Inslee’s office and with the Legislature. Changing water quality regulations to allow for more dam spill can be done without legislation, said Robb Krehbiel, the Northwest representative for Defenders of Wildlife and a member of the working group tasked with investigating how to provide the orcas with more prey.

Blackmore said she expects lawmakers to give serious considerations to committee recommendations that require legislative action or funding. The working group on reducing disruptive shipping noise is considering a recommendation to convert the Washington State Ferry fleet to electric motors, and Blackmore’s group plans to ask the Legislature next year to fund the removal of a dam on the Middle Fork Nooksack River in Bellingham.

The final recommendations could include requests for changes in local governments and neighboring states, as well as public awareness campaigns aimed at reducing toxins in Puget Sound or disruption caused by recreational boaters.

“Honestly this discussion needed to happen decades ago and I’m concerned we won’t be able to put forward as aggressive a package as needed to help these whales,” Krehbiel said. “I could be wrong because the task force is still meeting, but we’re in a very tight spot with these orcas. It’s a now-or-never situation with protecting them and making sure they don’t go extinct. I’m optimistic about the direction the task force and working groups are going, but there’s a lot that needs doing and I don’t know if we’ll be able to complete everything in that time.”