Primary results are in and the GOP could be in trouble. 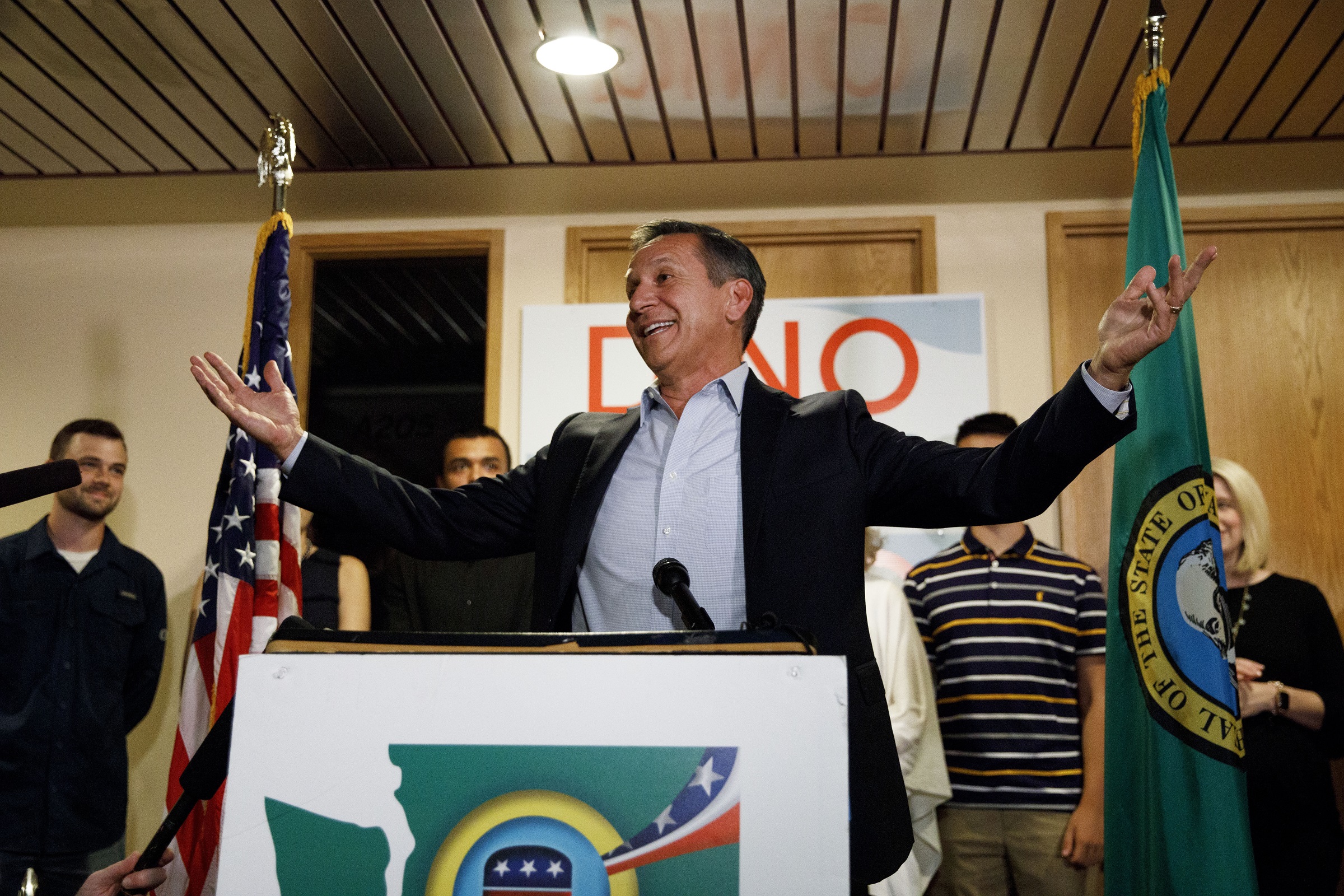 Blue waves or red tides — the August primary can offer hints for those looking for signs of these voter-made phenomena. This year, the Democrats were the ones on the lookout, and there were indications that there may be a few blue swells on the horizon, especially in Washington’s Congressional primaries.

Democrats hope to shift the balance of power in the U.S. House of Representatives in November and three Washington districts look to be flippable: the 3rd in Southwest Washington, the 5th in Eastern Washington and the 8th, which jumps the Cascades from King to Kittitas County. A victory anywhere would help the Democrats take control, and some of the preliminary numbers on election night looked encouraging, with Democrats performing well in all three.

There are still plenty of ballots to be counted, but Republican incumbents Cathy McMorris Rodgers (in the 5th) and Jaime Herrera Beutler (in the 3rd) currently look like they could be in trouble in the fall. And in the 8th — one of the most closely watched races in the country — leading Republican candidate Dino Rossi has reason to  be concerned.

We had Crosscut journalists at election night parties — from Seattle to Ellensburg. Read their dispatches here.

Rossi has previously run and lost for governor (twice) and U.S. Senate (once) but he remains a stalwart in the state GOP and a race in his home district might give him a better path to victory than trying to win hearts and minds in central Puget Sound’s urban areas. He is the biggest name and most experienced politician running in that race, and old warhorses of state GOP politics, like former Sen. Slade Gorton, have predicted that Rossi will win in the GOP-leaning district that went for Hillary Clinton in 2016.

But Rossi makes the retiring Republican he seeks to replace, former King County Sheriff Dave Reichert, look moderate. Reichert had a relatively strong anti-Trump stance and a decent environmental track record. Rossi has distanced himself from Trump on tariffs, but stands with the president on most other matters.

Rossi has long shaded his strong conservatism with a winning smile and a moderate demeanor — and a tendency to downplay issues where he is out of step with the state’s mainstream thinking, such as abortion and gay marriage. When he ran for governor in 2004, he largely avoided talking about abortion by saying the issue had been settled in the courts. But in the era of Trump, that is no longer true.

The biggest news of election night from Dino-land was that a Stranger reporter was kicked out of his election-watch party in Bellevue. (Since when does The Stranger know where Bellevue is?) Rossi, meanwhile, was pulling well under 50 percent of the vote while his three main Democratic rivals, combined, were pulling in nearly 50 percent.

Elsewhere in the state primaries, there were few surprises. The conservative commentator William F. Buckley once announced that he would rather be governed by the “first 2,000 people in the telephone directory than by the Harvard University faculty.” I think the phone directory jumped in on the U.S. Senate race in Washington where incumbent Sen. Maria Cantwell, a Democrat, drew 28 opponents who consumed the vast majority of space on the August primary ballot.

Unsurprisingly, Cantwell trounced the competition. Coming in a distant second, and securing her place as Cantwell's challenger on the November ballot, was Susan Hutchison, former Republican state party chair and onetime KIRO-TV personality. One thing is certain: Washington’s senators will continue to be an all-women team, and we won’t have to worry about the governance of GoodSpaceGuy or right-wing provocateurs like Patriot Prayer founder Joey Gibson.

In Seattle, the Democrats continued to rule and incumbents running for the Legislature led with large margins. The Soviet of Seattle seemed strong, though not enough for newcomer Sarah Smith. The Alexandria Ocasio-Cortez wannabe hoped to upset Democratic incumbent Adam Smith of the 9th Congressional District by running to his left. That could be catnip for Seattle voters, but early returns have Smith trailing a Republican, Doug Basler, for the right to take on Smith in the fall.

In the 48th Legislative District on the Eastside, party flip-flopper Rodney Tom is attempting a comeback. He is the only person in the history of Olympia to have served in all four legislative caucuses: the GOP Senate and House, and the Democrat Senate and House. He’s running as a Democrat this time, but a Democrat who almost single-handedly foiled his adopted party from controlling the legislature by helping to form a “majority coalition” that monkey-wrenched party plans and leadership.

Tom thought that was an asset, but the returns on election night had him trailing badly in the race against an actual Democrat incumbent, Patty Kuderer. Tom and others have made the case that he represents so-called centrism — the Seattle Times endorsed him on that basis — but it looks a lot more like opportunism, and do we really need more of that?