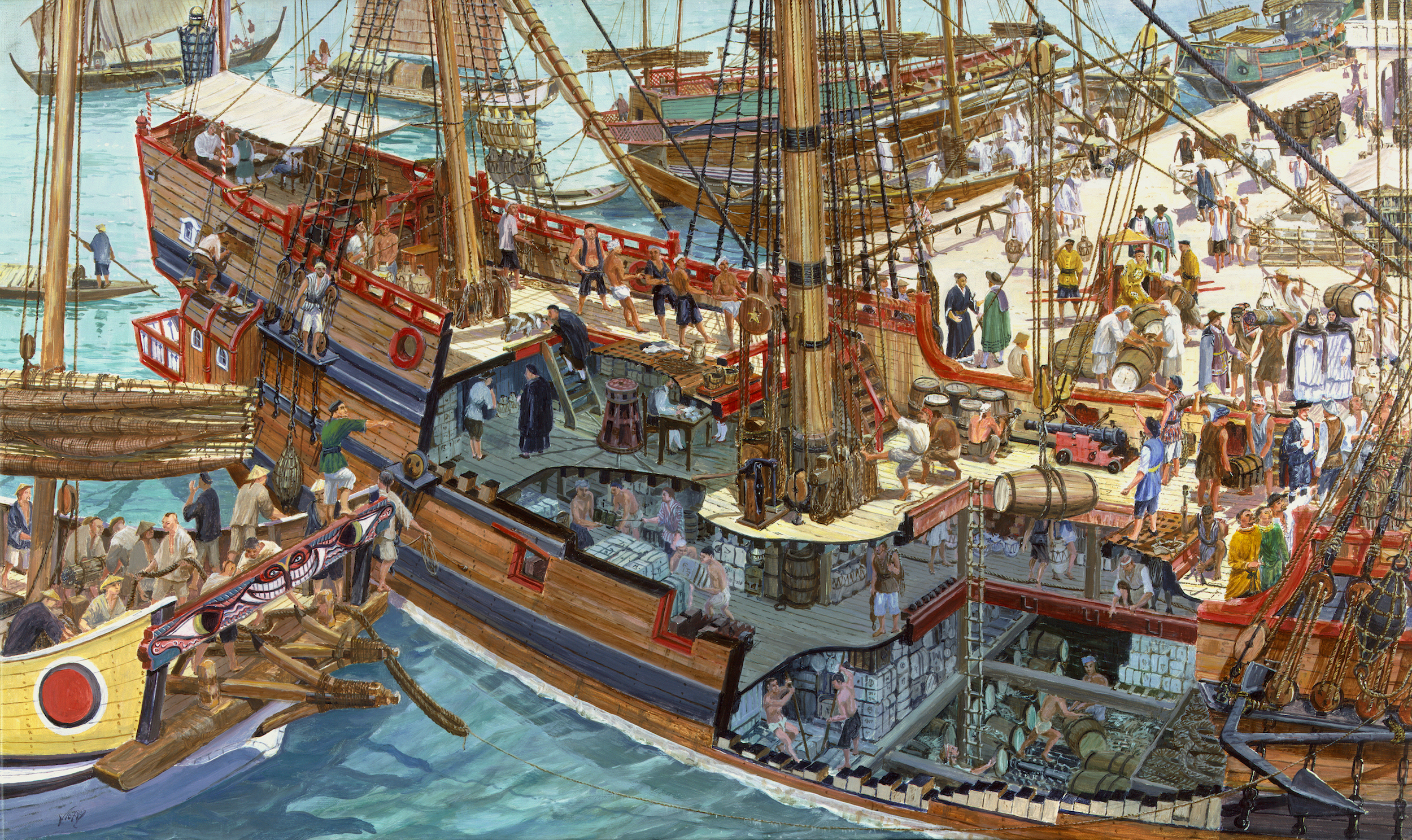 Historians now believe that a Manila galleon, like the one in this painting by New Zealand artist Roger Moore, went down off the Oregon Coast. (Photo by Roger Morris/National Geographic Creative)

But for quirks of colonial competition, the troubles with managing empire, and the shifting fortunes of international commerce, the Pacific Northwest could have been part of the Spanish Empire.

Juan Perez mapped and claimed the Pacific Coast south of Russian-held Alaska for Spain in the 18th century — before the United States was born. The first European settlement in the Pacific Northwest was the short-lived colony of Nunez Genoa at Neah Bay in what is now Washington state. It was established in the early 1790s at the mouth of the Strait of Juan de Fuca to solidify Spain’s claims to the region, more than a decade before the 1805 arrival of the Lewis and Clark expedition on the coast.

Spanish names, like the San Juan, Camano, Fidalgo, Orcas, Lopez, etc. are now the most tangible signs of that early influence that survived the onslaught of Anglo-American conquest. But there’s new proof that Spanish empire had a much earlier, tangible impact: the wreck of a heavily laden Spanish “Manila” trade galleon on an Oregon beach in 1693-4.

Some of the survivors of that wreck apparently married into local tribes and had children, and the goods from that shipwreck became part of the trade and adaptive use of native peoples. It was also an example of the clash of cultures, the result of which was that a good number of the shipwreck survivors were killed off, according to native oral histories.

The summer 2018 issue of Oregon Historical Quarterly documents that and tons more about what happened, who and what was washed up on the beach some 325 years ago.

The incident in question is the so-called Beeswax wreck, which I've written about a few times over the years. It has long been known that a 17th or 18th century vessel, probably a Spanish ship, wrecked on the Nehalem Spit on the northern Oregon coast. That's just south of present-day Manzanita, about 40 miles from the Washington border. Part of its cargo, a massive load of beeswax destined for church candles in Mexico, has been washing up on the beach ever since. Other bits and pieces have been discovered too: teak wood from the vessel, shards of Chinese porcelain, even, possibly, some silver coins.

A group of researchers — like forensic CSI detectives — have put together an exhaustive series of articles for the Historical Quarterly that broaden what we know of this incident. One of them, archaeologist Scott Williams, has been searching for the main body of the wreck for years on his own time — a compelling story in itself. That wreck, visible in the Oregon sands into the late 19th century, has disappeared beneath them, and much of the wreck might lie offshore in tricky waters.

Williams and his team have been able to narrow the identity of the ship to one near certainty: the Santo Cristo de Burgos, a Manila galleon that went missing after setting sail from the Philippines to Acapulco in 1693. The ship was part of a heavy trade between Asia and America, galleons were packed with immense wealth in trade goods flowing in both directions and keeping Spanish colonies afloat.

Researchers have dug into Spanish archives in Seville and elsewhere and have found fascinating documents — ones that might not have been examined since the galleon set sail centuries ago. These include a list of the passengers and crew who were supposed to be aboard, and a partial list of its rich cargo. In addition to beeswax, the ship was loaded with Chinese silks, satins, porcelain, ivory carvings, clothes, fans, cotton fabrics, bedding, paper and, if it was like other galleons, much off-the-books smuggled material. Each annual galleon shipment literally meant the economic life for the colonies. Imagine if Seattle were only supplied by one shipment a year.

From the new scholarship, we also learn of another cargo that has not washed up on the beach (thank goodness) but might lie underwater: The ship was apparently carrying over two tons of liquid mercury, which was used for processing silver ore and essential to the Spanish colonial economy in the New World. The mercury might be lying in globules in the deep water or under the sand, highly toxic as we know now. In all, the quarterly’s article on the Manila trade and documentation offer a look at the complexities of early trans-Pacific trade and colonization.

The list of people who were to be on the ship — not all were necessarily aboard because the Santo Cristo de Burgos left early without its full crew and supplies to avoid paying a tax levied on it — is interesting. There were high-ranking Spanish officers, a crew of Spanish, Basque, and Filipino sailors, soldiers and crewmembers, plus probably unlisted slaves. In an article on the ship’s crew, authors Cameron La Follette, Douglas Deur, and researcher Esther Gonzalez conclude the wreck was a milestone historic event representing “the first known direct contact between Europeans, Asians and Native peoples” of the Northwest coast.

No one knows exactly how the galleon ended up where it was not supposed to be — it is the northernmost galleon wreck known. The ships generally crossed the Pacific heading east using a northerly route, then turned south down the California coast following currents to Mexico. It is likely that the ship was somehow disabled and washed ashore in a winter storm. A shortage of crew members and supplies could have contributed to the cause, along with a high death rate among the crew (disease was often rampant). Perhaps they lost their masts or ability to steer. No one knows.

Still, there were witnesses.

Oregon Historical Quarterly compiles stories of the wreck and its survivors from local tribes. The Tillamook and others tell of strange men landing on the beach — a fair number by some accounts. Some left on foot to find help or home; some, perhaps most, were said to have been massacred in due course by the Indians for mistreatment of native women; a few — at least four, the accounts tell us — were absorbed into local families. The recovered beeswax was traded through local networks — explorers Lewis and Clark were offered some by the Clatsop on their visit to the region in the early 19th century. Local museums today have sharp arrowheads excavated from village sites that are made from knapped shards of Chinese porcelain.

In 1811, a French explorer encountered an aged man named “Soto” who claimed his father was a Spanish shipwreck survivor. Intriguingly, we now know that there was a man on the ship with the name of Francisco de Zotto. A local chief named Kilchis was said to have African features and he claimed descent from wreck survivors — perhaps an unlisted slave from the Santo Cristo de Burgos.

There is a lot more to the tale. There is a long story of buried treasure in the area that might or might not be tied to the wreck. There is still work to be done in finding the ship’s main parts, including a full complement of cannons to protect the vessel from privateers and pirates, the mercury cargo and others parts that might more definitively identify it and its fate.

For anyone who loves history, archaeology, Northwest legends, and detective work, you can’t do much better this summer for the ultimate beach reading than the latest issue of Oregon Historical Quarterly where you can delve into the mysteries and facts surrounding the “milestone” event of Oregon’s Beeswax wreck.