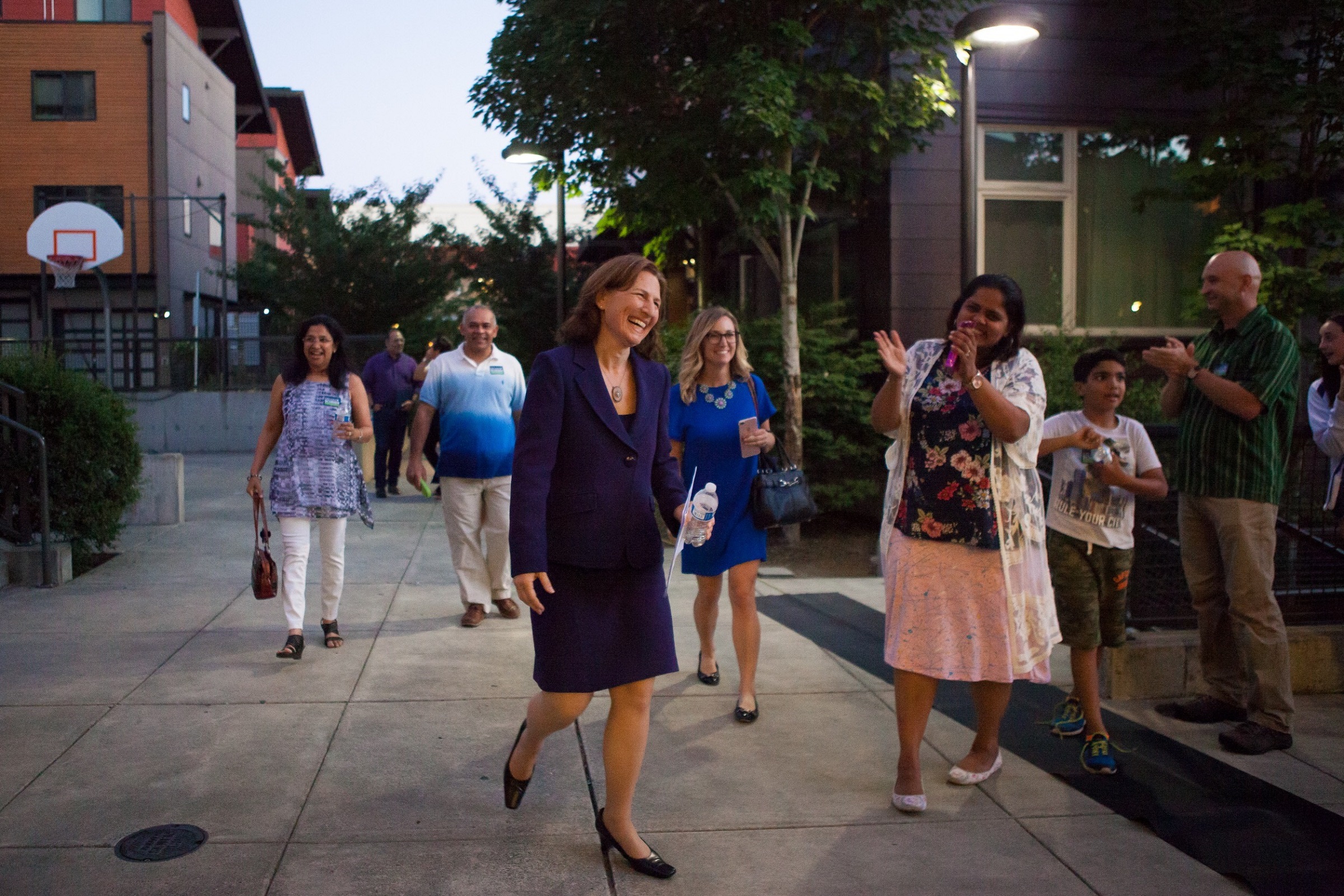 Dr. Kim Shrier on her way to address supporters at her primary election night event at YWCA Family Village on Tuesday, Aug. 7, 2017, in Issaquah, Wash. (Photo by Jovelle Tamayo/Crosscut)

The stage is set for the much-anticipated race to represent the 8th Congressional District after one of two Democrats fighting for the second spot in the general election conceded Monday. Democrat Kim Schrier will now advance to face Republican Dino Rossi in a contest that will be pivotal in the Democrats’ attempt to take control of the U.S. House of Representatives.

After ending election night in a close third, Jason Rittereiser slowly gained on fellow Democrat Schrier, but ultimately fell short. Monday’s ballot drop widened that margin some, putting Rittereiser within 1,120 votes of the Issaquah pediatrician, a range that would have allowed the Ellensburg-born lawyer to order a self-funded recount. But with the number of uncounted ballots dwindling, Rittereiser chose to conceded.

“This race has always been greater than any one individual,” he said in a statement. “The 8th Congressional District will help determine control of the House of Representatives. I care deeply about this district, and as Democrats, we must win this seat. The best thing for our party, the district, and our nation, is to come together to ensure we take back control of Congress and put a check on the Trump Administration.”

Schrier tweeted Monday, “I am honored and humbled to be your Democratic nominee for Washington's 8th Congressional District! Thank you! I'm ready to take this fight to Washington.”

Rossi — the only Republican of note to run in the primary — stands in first place with 43 percent of the vote.

Schrier led Rittereiser by 1.3 percent on election night. But in the more rural counties of Chelan and Kittitas, late ballots broke heavily in his direction and left him within 1,067 votes and less than 1 percent behind heading into the weekend. The rural counties that have favored Rittereiser nearly tallied all their ballots by then. Late King County ballots leaned toward Schrier.

Before election night, Schrier, a pediatrician, was seen as the favorite among three frontrunner democrats to advance to the general election. That assumption was based largely off of one poll from the House Majority PAC showing her in the lead, her voracious fundraising and several high profile endorsements, including from Emily’s List.

But Schrier's sizable fundraising advantage helped her secure a spot in the November election.

The outcome of Tuesday’s primary has become a particular obsession because the 8th District — a strangely shaped chunk of land that spans Washington’s east-west Cascade divide — decently represents the hopes of Democrats. Namely, it’s a district represented by Republican Dave Reichert, but with sizable suburbs that seem to be turning against President Trump. In 2016, it split its vote between Reichert and Hillary Clinton.

Despite that, it remained “likely” Republican, according to the Cook Political Report — until Reichert announced his retirement, when it was then switched to “toss up.” “If Democrats could have picked one House GOP incumbent to retire in 2018, it would have been GOP Rep. Dave Reichert, who represents a suburban Seattle seat Hillary Clinton won by three points, but has cruised to reelection on the strength of his reputation as the former King County sheriff,” wrote David Wasserman for Cook.

In that same poll that favored Schrier in the primary, Rittereiser fared better in the general, beating Rossi. Schrier was down 5 percentage points.

Going into election night, the 8th District was seen as the most interesting in Washington State. But it may have lost that mantle to its neighbors to the east and south. Once believed to be safe, Republican Reps. Cathy McMorris Rodgers (Spokane) and Jaime Herrera Beutler (Camas) both suddenly look vulnerable. McMorris Rodgers leads her opponent, Lisa Brown, by 2.5 percentage point. And Herrera Beutler leads Carolyn Long by 7 percent. But neither Republican cracked the 50 percent mark, meaning both have a real fight on their hands.