Carrying her dead calf around Puget Sound for 17 days, J-35 forced her pod’s fate into the global consciousness. Will it inspire the tough decisions needed to save them? 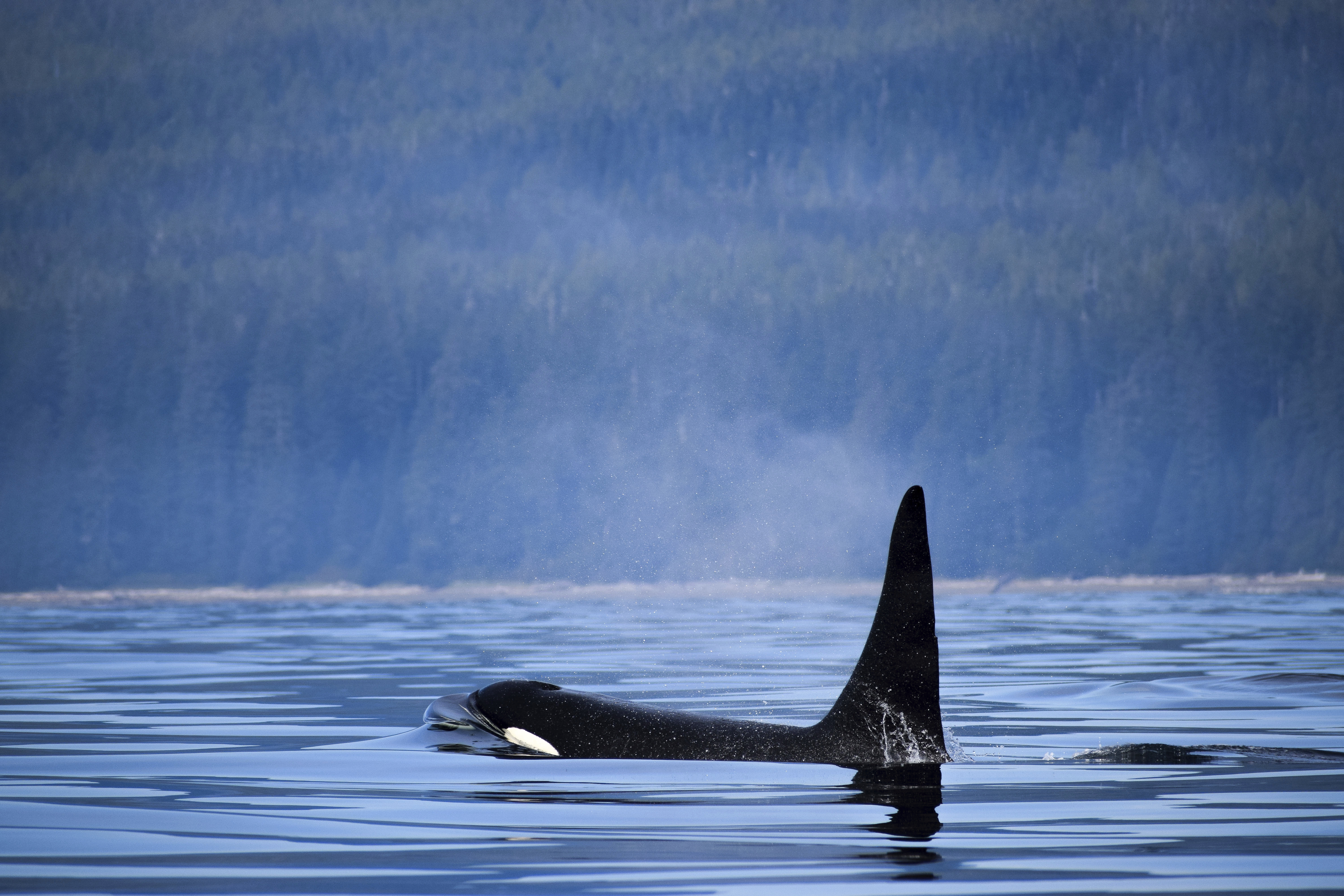 The mother orca known as J-35 finally released her dead calf this week after 17 days of carrying it around Puget Sound in what appeared to be an act of mourning.

Now the question lingers: Will J-35’s loss lead to useful action to save a killer whale population hovering on the brink?

“Oh, I think so,” says Deborah Giles, who drives the University of Washington Center for Conservation Biology research boat that has been following the J pod and who recently served as research director at the Center for Whale Research in Friday Harbor, Washington. “Those sorts of raw emotions do move people.”

Sam Wasser, the center’s director, is more skeptical. Yes, people are engaged now, and even before the calf died, Gov. Jay Inslee had convened a Southern Resident Killer Whale task force (Puget Sound orcas are technically Southern Resident Killer Whales). But the orcas need more than studies, and while people clearly care right now, he wonders how long their attention spans will last.

Still, J-35’s grieving has focused the collective mind, at least for now — and there are signs that Inslee’s task force and other key players are at least considering something that, until now, has been considered verboten: A radical move that could help restore the orcas' main food source, and potentially give the whales a fighting chance.

The Southern Resident Killer Whales have not had a single successful pregnancy in three years. The mortality is likely due to a combination of factors, but many of them are tangled up in one unavoidable problem: The orcas are starving.

Unlike neighboring killer whales that eat sea mammals, the Southern Resident Killer Whales eat salmon. Whenever possible, they eat chinook, presumably because chinook are larger and fattier than other salmon species and therefore provide larger caloric rewards for the same amount of hunting.

But a good chinook has become hard to find. Two chinook runs have been declared endangered by the federal government. Seven, including those that spawn naturally around Puget Sound, have been deemed threatened, and one is a candidate for similar protections.

Our local killer whales also feed on chinook salmon runs heading for Canada's Fraser River, but many of those runs are gone, and the remaining big one doesn't peak until this month. The orcas also eat salmon from the Columbia River, but some Columbia chinook runs are extinct. Others have been listed under the Endangered Species Act.

The lack of chinook exacerbates other threats to the orcas, including the buildup of toxic chemicals in their bodies. The toxics show up in the smaller fish that salmon consume. The salmon concentrate the substances, and then in turn they are eaten by the killer whales. Toxics build up in the killer whales' fat, where they are basically sequestered, but if orcas are starving, they metabolize their fat, which brings the toxics into circulation.

To restore salmon, we must look at dams

If we want more orcas, we need more chinook salmon, but it’s not as if people haven’t spent a lot of money trying to produce them. Many millions have been spent over the years to restore salmon habitat. State, federal and tribal governments have built hatcheries. Courts have also forced federal agencies to “spill” more from Columbia river reservoirs, letting water flow over dams, instead of through hydropower turbines, to speed young fish downriver.

But the threatened and endangered salmon are still threatened and endangered, and more of the same is unlikely to change that. Two years ago, U.S. district Judge Michael Simon rejected a biological opinion on the operation of federal Columbia River system dams — the fifth time a federal judge had rejected a Columbia River biological opinion. He talked about federal agencies’ “cynical and transparent attempt to avoid responsibility for the decline of listed Columbia and Snake River salmon and steelhead” and said the document “continues down the same well-worn and legally insufficient path taken during the last 20 years.”

Proposals that have surfaced amid the media attention to J-35 are no better. Last weekend, researchers tried feeding hatchery-raised chinook to one of J-35’s pod-mates, a whale called J-50, who appears to be dangerously malnourished. The orca didn’t even appear to notice the fish. A bill co-sponsored by Sen. Patty Murray, D-Wash., would have wildlife managers shoot sea lions that prey on salmon below Bonneville Dam. Wasser calls it “a total fool’s errand.”

Ultimately, to save the orcas, we may have to face the prospect that many policymakers have studiously avoided: not just modifying some Columbia River system dams but removing them. Salmon advocates have long argued that ultimately, the only way to restore salmon runs in the Columbia’s main tributary, the Snake, is to breach the four Lower Snake River dams. Taking out those dams would allow salmon to migrate into millions of acres of spawning habitat in the Idaho wilderness — habitat that may become increasingly critical to the fish as climate change warms habitat at lower elevations.

But that’s a politically sticky proposition: The dams provide some 4 percent of the region's hydroelectric generating capacity. They also create pools that allow some farmers to irrigate crops without the heavy pumping lifts that lower water levels would require. And the locks attached to them enable barge traffic to reach Lewiston, Idaho, allowing farmers to ship grain to Portland.

“The dams are more valuable than ever,” says Jared Powell, a spokesperson for Rep. Cathy McMorris Rodgers, a Republican who represents Eastern Washington. “With low commodity prices, we need to keep shipping prices low for agriculture producers.” In addition, Powell says, it’s “estimated that it would cost upwards of $372 million a year to make up for the lost power generation of the four Snake River dams alone.”

On the other hand, a study compiled this year for the Northwest Energy Coalition, an alliance of environmental groups, tribes and businesses, suggests that the dams' power could be replaced by wind and solar, plus efficiencies and battery storage, at a modest cost: The average household would pay little more than an extra $1 per month, maybe less.

So far, however, federal agencies have avoided serious consideration of breaching the Snake River dams — and some Eastern Washington interests want to keep it that way. Rep. McMorris Rodgers cosponsored a bill, passed by the U.S. House of Representatives, that would prevent consideration of breaching and preserve the current recommended level of spill for the next three years. Its chances of passing the Senate look slim, but meanwhile, an appropriations bill that would also prevent any increased spill has been introduced in the House.

Breaching the dams wouldn't restore all of the Columbia Basin's listed salmon populations and wouldn't by itself restore the killer whale population to health. Powell is right when he says “one river and four dams will not bring back the Southern Resident Killer Whale.”

But salmon advocates say dam breaching is still necessary. It's “not the silver bullet,” says Steve Mashuda, managing attorney for oceans at Earthjustice’s Northwest office, but “not doing [it] is going to doom your efforts on the killer whales.”

Until now, no political leaders have suggested that the dams come down. But now, says Save Our Wild Salmon Executive Director Joseph Bogaard, “J-35 has created some political space.” Breaching has become one of the draft recommendations of Gov. Inslee’s task force.

“Back in the late ‘90s, [dam breaching] was on the table,” says Todd True, a senior staff attorney at Earthjustice. But the context was different, and people decided to try something else. ”Now we’ve tried doing something else,” he says, and we’ve seen that it hasn’t worked.

“We've certainly had the alarm raised more than once before,” True says. To see if this time is different, “watch what happens with the orca task force; watch what the governor does,” he says.

“Big change is not easy,” True observes. But “it does reach tipping points. Maybe we're at one.”