The socialist council member wants to change how the Landmarks Preservation Board works to save the beloved venue. 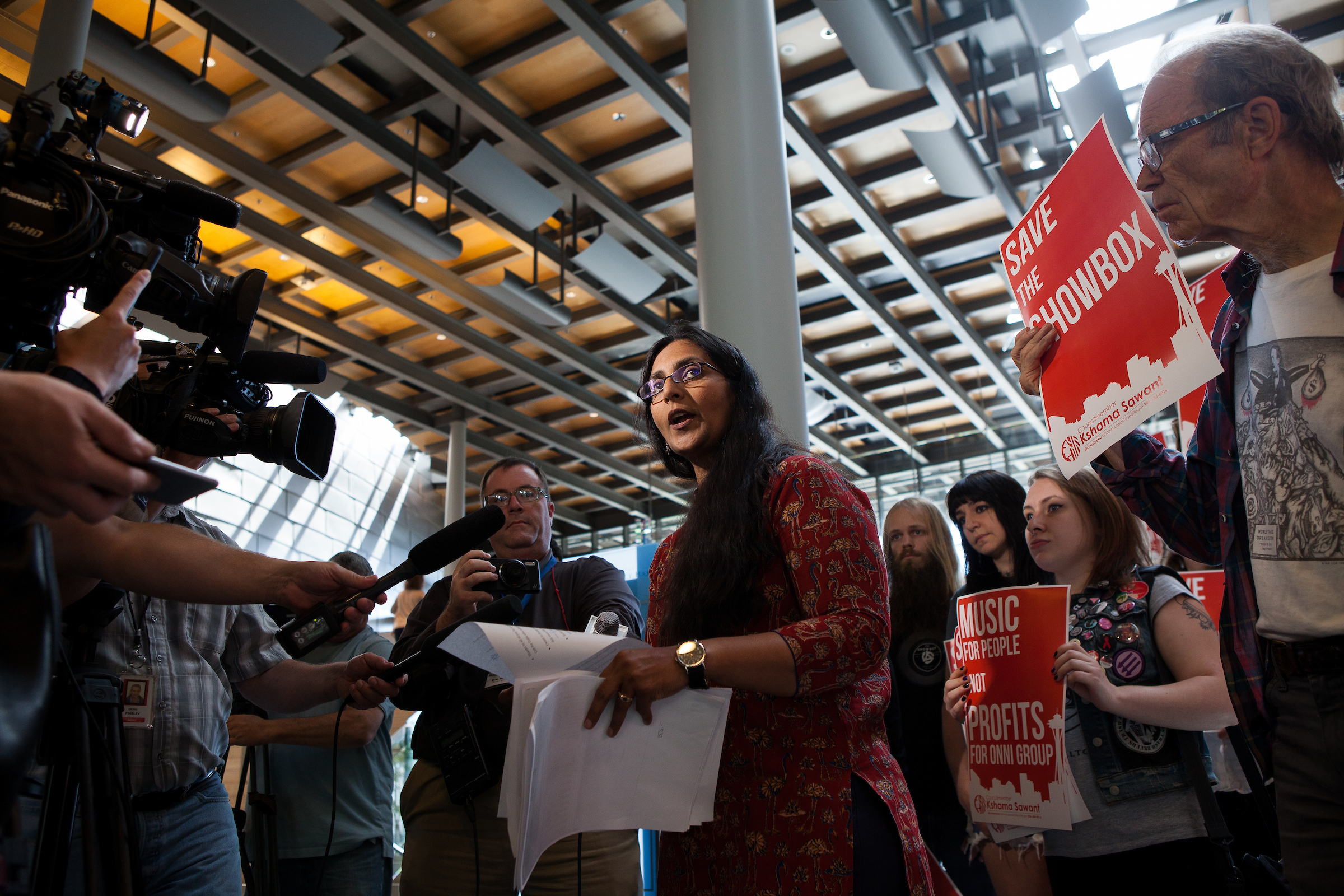 Councilmember Kshama Sawant holds a rally to protest proposed development at the site of the Showbox Market on Wednesday, Aug. 1, 2018, at Seattle City Hall in Seattle, Wash. (Jovelle Tamayo for Crosscut)

Seattle music fans, preservationists and even Seattle Times columnist Brier Dudley have an ally in socialist Seattle City Councilmember Kshama Sawant, who has given the “Save the Showbox” rallying cry her signature red sign treatment.

At a rally Wednesday in City Hall, Sawant said she would pursue three avenues for preventing developer Onni Group from demolishing the nearly 80-year-old music venue for new housing. First, she will introduce a non-binding resolution urging the city’s Landmarks Preservation Board to grant the venue landmark status. She also said she is considering an ordinance to strengthen the authority of that same board, to give them more power to preserve not just a building, but the building’s purpose — in this case music.

Third, and perhaps most significantly, Sawant said she was also interested in expanding the boundaries of the Pike Place Market historic preservation district — a move that the council member said she cleared with both the Department of Construction and Inspections and the City Attorney’s Office.

Onni Group said it intends to file its own application for landmark status, but likely as a means to better control what may be an inevitable process. However, as Crosscut columnist Knute Berger wrote Wednesday, achieving that status beyond just preserving the facade is tricky business. Sawant’s proposal to expand the preservation district may be a straighter shot.

The response to the news late last week that the storied venue could be redeveloped into a large apartment complex has highlighted competing political veins in Seattle, indicating that this is not just a fight over a music venue, but a fight over how America’s most quickly growing city should deal with its growth.

First came a wave of intense sadness that bemoaned yet another loss to Seattle’s fading culture. Numerous artists, from Guns ’n Roses guitarist Duff McKagan to drummer Questlove, lamented its closure. Sawant said Ben Gibbard, the leader of Seattle indie rock mainstay Death Cab for Cutie, reached out to her office to enlist her help.

But just behind that outpouring of grief was a very complicated question in response:  Should nostalgia trump progress? Seattle needs housing of all sorts and what would replace the music venue is … housing. “The outcry to save the Showbox is just more nostalgic pique from a public in the throes of anxiety about change,” wrote Josh Feit on the C is for Crank. “Preserving memories is not the job of cities. Successful cities are the ones that constantly build new memories. The simple secret to doing that: Stop living in the past.”

Margaret Morales, senior researcher at the pro-development Sightline Institute, wouldn’t take a position on the Showbox one way or the other. But she pointed to the fight as indicative of larger issues with how the city’s growing. Red tape, expensive application processes and restrictive zoning, she said, have made it more difficult to build in Seattle, putting more pressure on certain parts of the city. “I would say builders have fewer options and for some reason this builder decided that the Showbox was their best option,” she said. “If they had more choices, maybe they would choose somewhere else.” She added, “Why are we here in the first place? It’s because the housing crisis has pushed people to the edge.”

Sawant, however, is no fan of developers, whom she accuses of pursuing profits at the expense of the city’s cultural institutions. “It should be made very clear that this issue is not a conflict between affordable housing and preserving cultural spaces,” she said. “As a matter of fact, working people in this city are losing both affordable housing and cultural spaces, while the only ones who benefit are big developers, land speculators, property management corporations, all of whom make off with huge profits.”

Shortly after her rally, Sawant marched to a meeting of the Landmarks Preservation Board to make her case that the building should be landmarked.

Sawant said her office was still researching and drafting her three possible avenues. But she said she intended to move quickly. “Time is of the essence.” 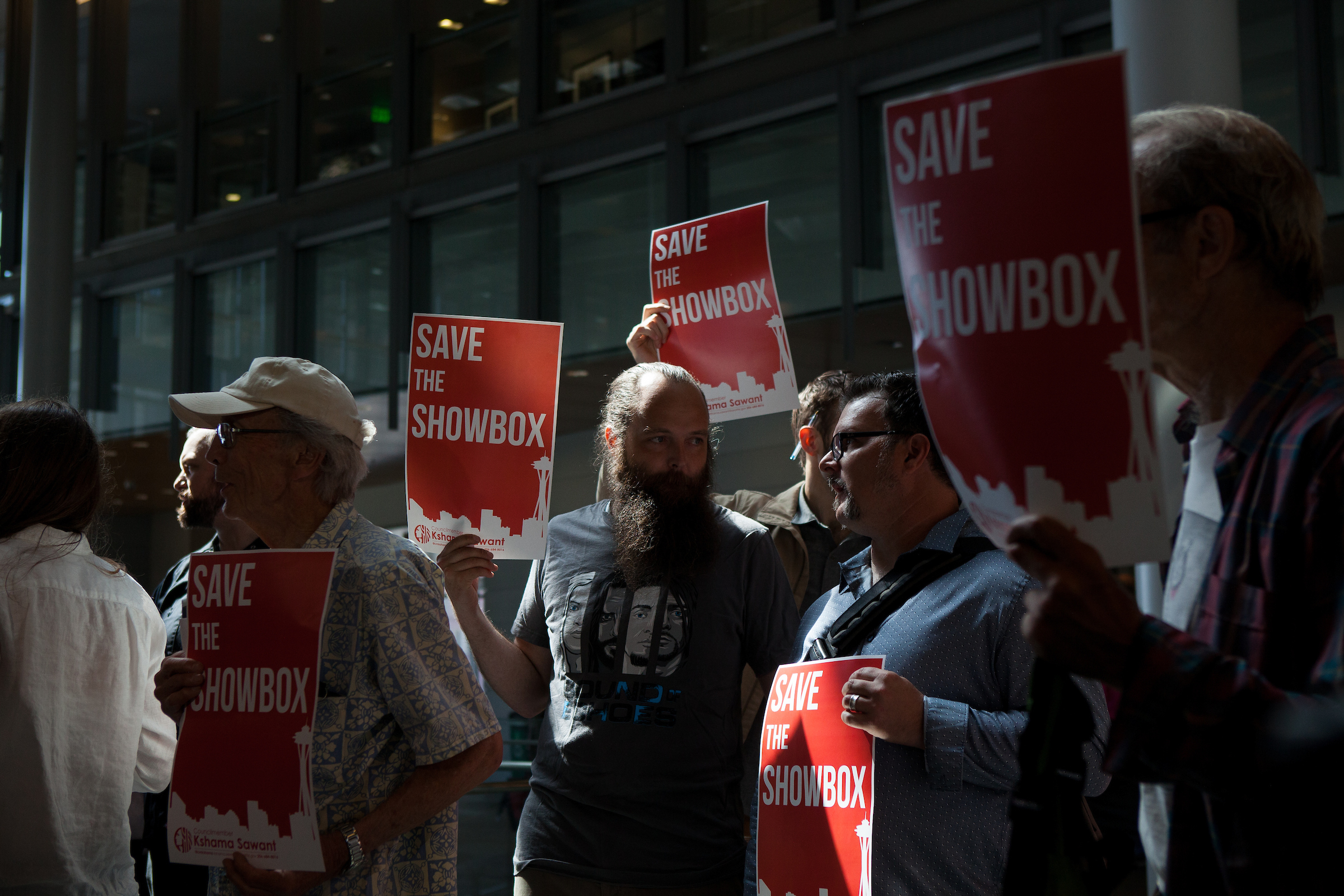 Demonstrators hold “Save the Showbox” posters at a rally hosted by Councilmember Kshama Sawant to protest proposed development at the site of the Showbox Market on Wednesday, Aug. 1, 2018, at Seattle City Hall in Seattle, Wash. (Jovelle Tamayo for Crosscut)

Demonstrators hold “Save the Showbox” posters at a rally hosted by Councilmember Kshama Sawant to protest proposed development at the site of the Showbox Market on Wednesday, Aug. 1, 2018, at Seattle City Hall in Seattle, Wash. (Jovelle Tamayo for Crosscut)