The scene at the 2018 Seattle Art Fair 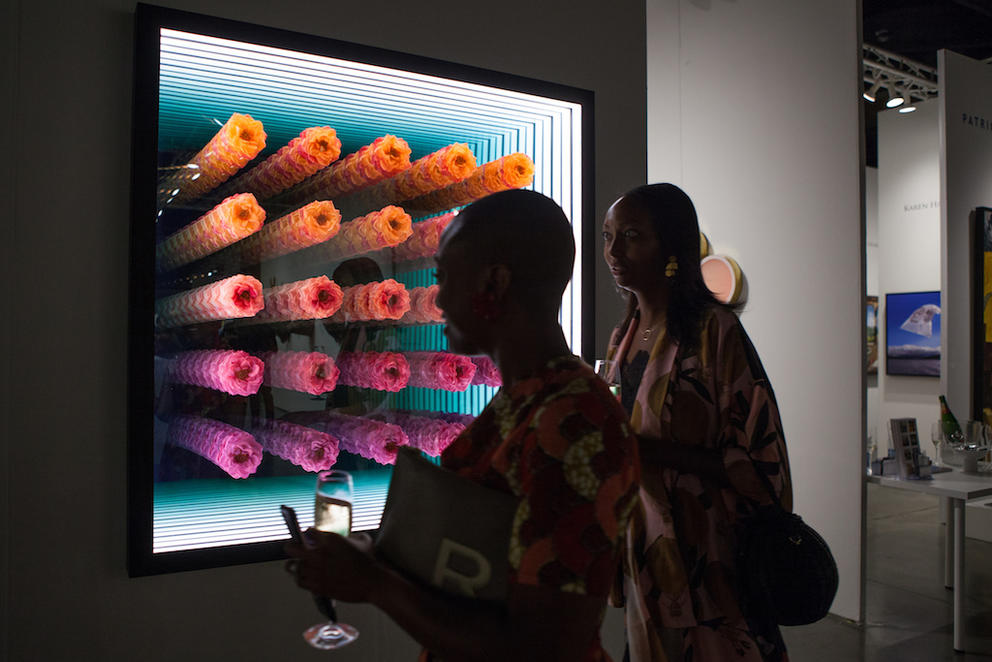 A 5x5 gradiant by Peter Gronquist catches the eye of attendees at opening day of the Seattle Art Fair at CenturyLink Field Event Center in Seattle on Aug. 2, 2018. (Photo by Jovelle Tamayo for Crosscut)

"I've sold 3 [out of 4] in the last 24 hours," Kucera said standing in his booth inside the CenturyLink Field Event Center. White, a recent Cornish grad already on the rise, creates vivid tableaux of millennial life. Made with tiny threads of a bioplastic called polylactic acid, his paintings look something like large-scale embroidery, and were attracting plenty of attention from cellphone camera-snapping art fair attendees. An installation featuring 30 facial images of Chelsea Manning — strung from the ceiling, a fascinating but unnerving artistic mobile — also generated loads of selfie photo opportunities.

Elsewhere in the event space, crowds gathered at the Orbital Reflector (a silver waterfall recalling Jiffy Pop tinfoil — a facsimile of the real deal that will be shot into space); gawked at 14-foot tall puppets of Seattle pioneers Mary Ann and Louisa Boren; and listened to a conversation between Charlene Vickers and Maria Hupfield using a handsewn cardboard megaphone. Their Jingles and Sounds for Speaking for our Grandmothers paid tribute to Anishinaabe culture.

"Seattle has been so supportive," said Max Fishko, Seattle Art Fair director. At the request of collectors, the Fair opened hours earlier than in years past, generating sales as well as buzz. The Fair also has an expanded footprint inside the Center; 106 galleries and a slate of talks are part of this year's Fair, in its 4th year.

The Fair continues through Sunday at the Event Center.

Here's a look at some of the scenes from Day One at the Fair.