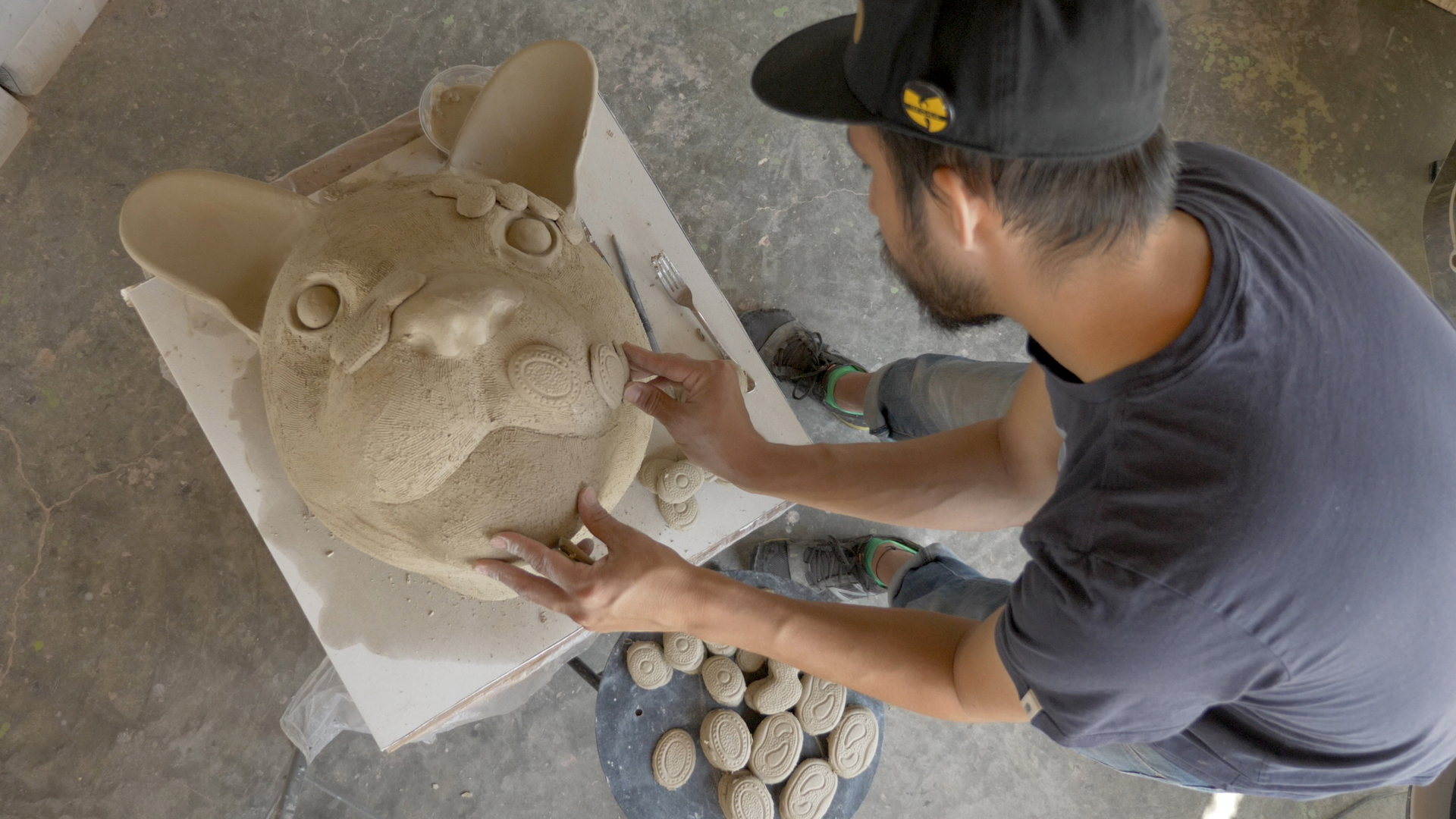 When ceramic sculptor George Rodriguez was a young boy growing up in Texas, El Paso and Ciudad Juárez felt like one place — despite the fact that the cities are divided by the Rio Grande and the U.S.-Mexico border.

In the 1980s and ’90s, Rodriguez says, that didn’t matter much. People moved back and forth with ease, as if they were only crossing imaginary lines in the desert sand. Though both cities are densely populated, they felt like one small town to Rodriguez — one community, one people surrounding him.

But when Rodriguez moved to Seattle to earn a graduate degree at the University of Washington, he felt isolated. He no longer heard Spanish being spoken. He’d trek south to Burien just to hear the rhythms of the language and eat Mexican food.

“I didn’t realize that I missed it, but then Mexican culture started showing up in my work,” Rodriguez says. “That’s when I realized who I was as a Latino and as a Mexican.”

A ceramic sculptor who works out of a studio in Ballard, Rodriguez creates art that often has Mexican overtones: sculptures of quinceñera dresses, the head of a luchador, a remake of American Gothic (by Grant Wood), featuring a housemaid and a farmworker.

Now, Rodriguez has finished a new collection of work called Lunar Vessels, a collection of clay animal-head vases inspired by the Chinese Zodiac, but with a Latino twist. Reminiscent of Ai WeiWei’s Circle of Animals, the vessels, alongside a wall-mounted Mexican Zodiac, will be on display at the Seattle Art Fair, which opens today.

With work that so outrightly celebrates his Mexican heritage, Rodriguez has worried over the years that he’d be labeled “a token Mexican artist.”

“I want to talk about my culture and my identity, but I also don’t want people to know me as ‘the Mexican ceramic sculptor,’” Rodriguez says. “But that’s what I want to say. That’s who I am. I can say that and not be the ‘exotic’ in Seattle.”

While an undergraduate at the University of Texas at El Paso, Rodriguez set out to be a graphic designer. He saw that as a way to be an artist and be traditionally employable — but it was “creativity in a box,” he says. He took his first ceramics class just to get the course requirement out of the way.

But in that class, he realized ceramics was more than just pottery. He fell in love with its versatility and potential for expression. He began using clay to express himself, not just as a young Latino, but as the youngest of five in an all-female household.

“I was very nurtured, but I also didn’t have a voice,” Rodriguez said. “I was more quiet. I was creating artwork that was all me. It was like journaling in a way.”

As a graduate student in Seattle, a Bonderman Travel Fellowship gave him the opportunity to visit 26 countries in 10 months. In 2010, Rodriguez flew to Lima, Peru, with absolutely no plan. He didn’t know anyone there or have a place to stay. His taxi driver was both his airport chauffeur and his travel agent in his first hours in the country.

It was a life-changing experience. Rodriguez traveled through South America, Asia and Eastern Europe, connecting with all kinds of people along the way.

“Even though there are exterior differences, in reality, we all want very similar things,” he says. “Being open and accepting to that allowed it to happen.”

“I was like a sponge,” Rodriguez says. “All over cities like Bangkok, I saw these wonderful temples that were just covered in decoration. It felt really familiar to me.”

Rodriguez was especially drawn in by ornamentations and architectural textures that he discovered were made from smaller detailed elements. After seeing such patterns everywhere he traveled, he concluded: the aesthetic of ornamentation triggers happiness. “It’s not about the functionality of the thing,” Rodriguez says. “It’s just to be pleasurable. And I think we all need a little bit of that, just pleasure for pleasure’s sake.”

READ: Battling robots and an Earth-orbiting satellite. Thirty “possible portraits” of Chelsea Manning. Gigantic puppets of Seattle’s early White settlers Mary Ann and Louise Boren. What the Seattle Art Fair Has For You

WATCH: When Akio Takamori died in January, the art world lost a revolutionary ceramics artist and the students and faculty at the University of Washington lost a beloved teacher and colleague.

Rodriguez’s studio is housed on the third floor of a repurposed industrial building. Floor-to-ceiling windows drench the space in sunlight, making silhouettes of the works in progress, pieces awaiting his final sculptural touches.

On one visit earlier this summer, an assistant, Liz Wiegard, was using custom-made plaster molds to press patterns into strips of clay. Rodriguez then delicately applied the cut-outs to a clay goat head, giving it a distinct texture.

Working with clay can be a tall order, especially in large-scale projects. Seattle-based artist Patti Warashina, well-known for her own humorous and imaginative ceramic work, says clay is a difficult material at any scale because artists must be aware of the chemical processes of shaping and painting clay sculptures.

Sometimes, after hours of delicate work, trapped air can expand explosively inside the sculpture when it’s fired  inside a kiln.

“It takes someone who loves the medium,” Warashina says. “All of a sudden, you throw it in the magic box and it blows up. You just have to be tenacious. You have to fall in love with it. You can see that George loves it.”

Rodriguez often relies on self-portraiture in his work. His first show in 2011 at the Foster White Exhibition was George, a ‘tocayo’-themed set of sculptures that depicted the artist as different Georges such as Curious George, Saint George and President George W. Bush.

“He’s distinctive and adventurous and he’s willing to give it a go more than others might,” says Phen Huang, director and owner of Foster White Gallery. “But he projects positivity. Inclusiveness is imparted in his work like it is in his person when you meet him.”

Rodriguez describes his ceramic work as a mix of humorous elements and ornamentation that are meant to draw people in and disarm them.

“But the main context and meat of it is about community and identity,” he explains. “It is about my identity, how I can express myself as a human, as a person. And how I can foster community around myself and around people.”