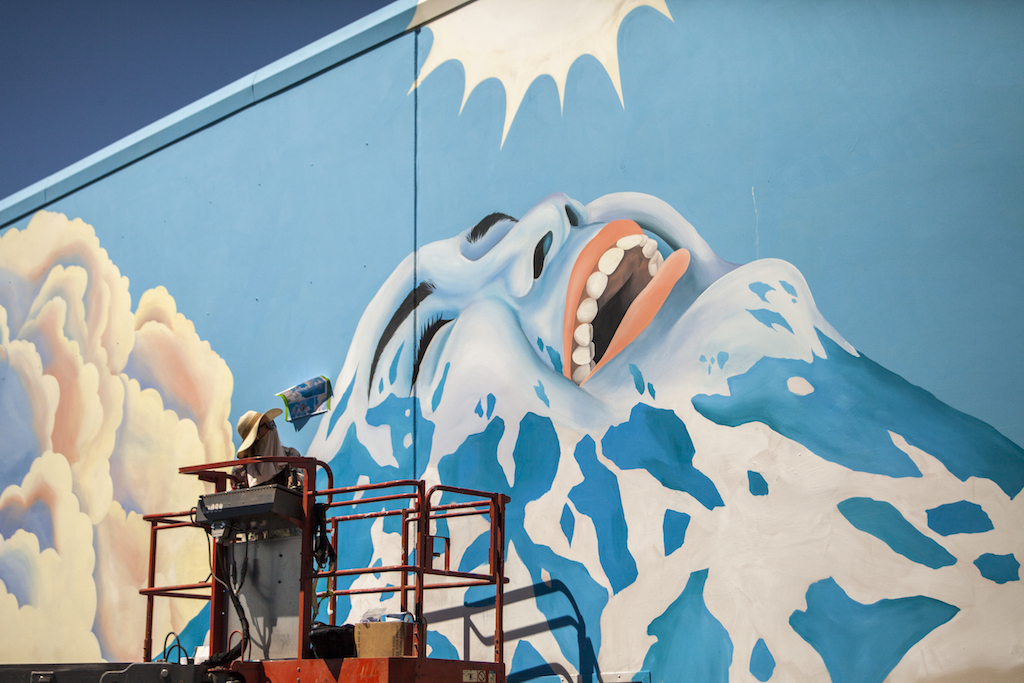 Home to sports stadiums and industrial warehouses, the flat expanse of Seattle’s SODO district is suddenly serving up art on a massive scale — and not just by way of the Seattle Art Fair at CenturyLink Field Event Center this weekend. While the Vulcan-sponsored art fair (where more than 100 galleries are exhibiting work) is intended to entice art buyers with big budgets, the newly completed SODO Track mural installation is public art for the people. 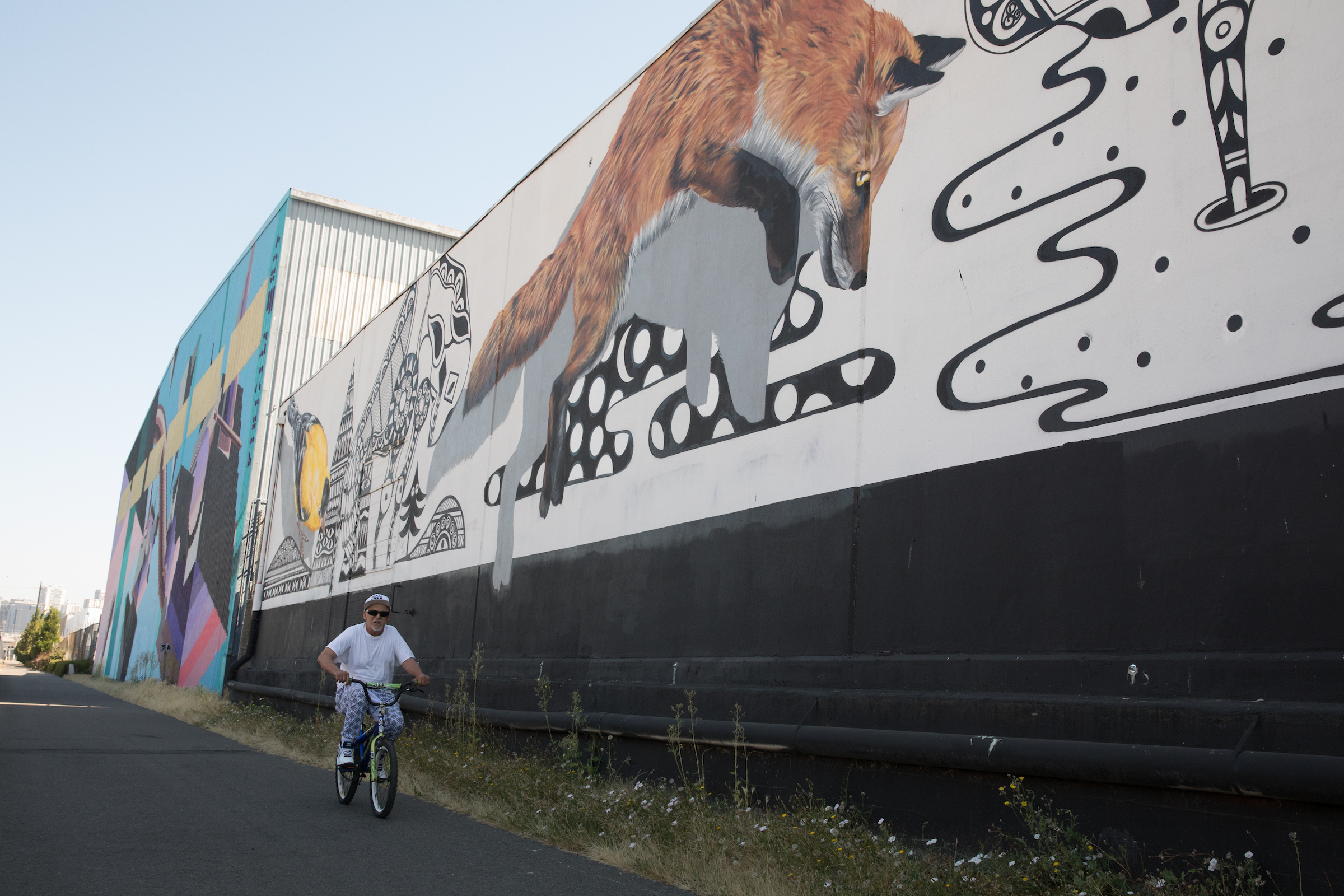 Featuring 50 vibrant murals by 62 artists hailing from Seattle to far-flung locations (including Brazil, Germany, the Netherlands, Japan, Israel, Argentina, Australia, Mexico, Romania and France), the SODO Track stretches for two miles along both sides of the busway and light rail track, from just north of Holgate Street to Spokane Street. According to 4Culture, it’s the world’s longest contiguous corridor of street art.

Muralists were asked to follow the loose theme of “Motion, Speed and Progress.” Accordingly, there’s a lot of forward momentum in evidence: a blue cheetah running, a high-jumper arcing, a herd of deer stampeding, a wolf escaping a burning city, people running through a forest of stumps, a fox pouncing and pink cats falling merrily from the sky.

But drivers along 4th and 6th avenues in SODO might never know the murals are there. The nondescript buildings facing those busy arterials keep their colorful secrets hidden behind, like plain khaki coveralls wildly embroidered on the back. That’s because the SODO Track was designed specifically for people using public transit.

“This project is expanding what public art can be,” says Tamar Benzikry, the senior 4Culture project manager who shepherded the project to completion over the last three years. “People think of public art in public places — parks, plazas, transit stations — but looking out a bus window can be an opportunity for public art too.” 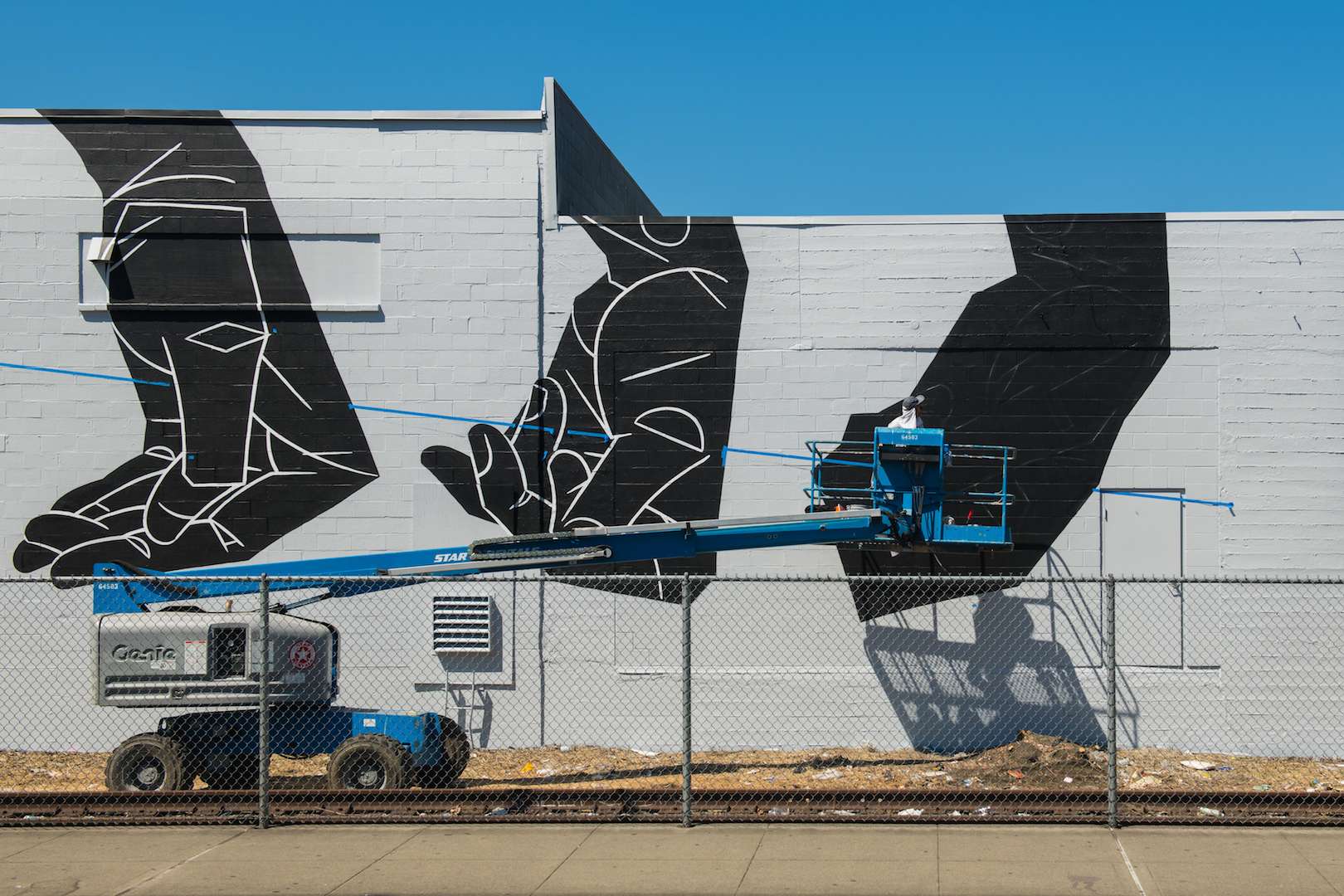 The SODO Track will be seen by some 50,000 commuters and visitors traveling the line each weekday. (By comparison, the Seattle Art Fair had weekend attendance numbers of 22,500 in 2017.)

The concept for the project has been floating around for nearly 25 years — ever since the SODO Business Association partnered with Urban Artworks to paint murals in hopes of reducing trash and graffiti in the area. Those original murals had long since been tagged and painted over, but the idea persisted. “People were talking about reinvigorating the SODO arts corridor when I arrived at 4Culture 10 years ago,” says Benzikry. “And they kept talking and talking about it. Finally I said, ‘We cannot talk about this anymore — we’re doing this now.’”

The first step was partnering with SODO BIA (Business Improvement Area, distinct from the earlier group) to get buy-in from the private businesses whose building’s backsides would be used as the canvas. “My initial reaction was very excited,” says SODO BIA executive director Erin Goodman. “My board was also excited, but skeptical,” she recalls.

Benzikry remembers hearing hesitation, too. “People would say, ‘That’s a great idea… Have you ever pulled that many permits?’” she says. “It was kind of like, ‘Good luck with that!’” Part of the skepticism was because at first the idea was to paint all 32 buildings at once, rather than over three summers. “It was clear we needed to do a pilot,” Goodman says. 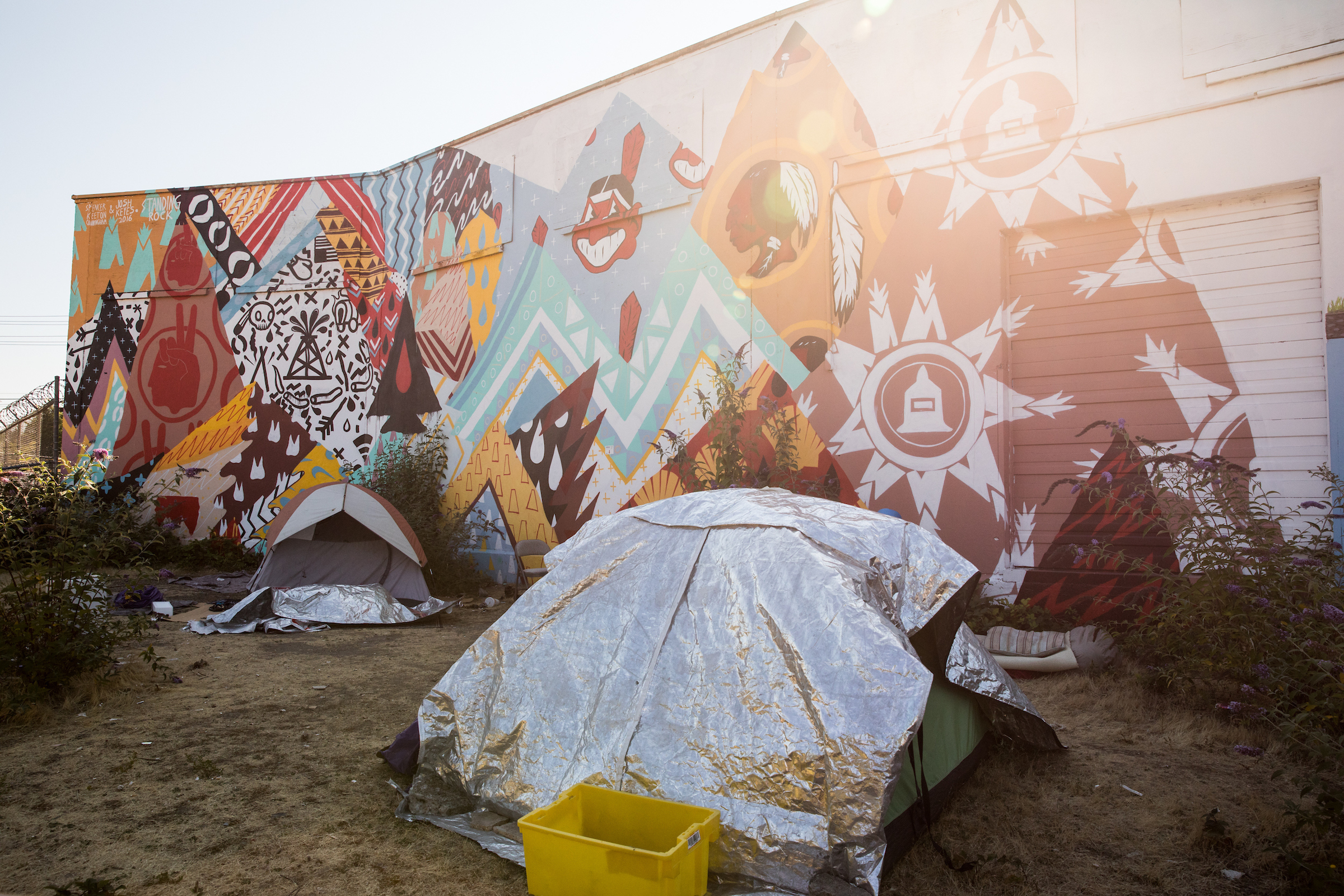 With King County Metro Transit and Sound Transit on board as partners, in 2016 twelve artists produced nine murals, including Mary Iverson’s multi-colored shipping containers set against Mount Rainier, Drew Merritt’s floating-upside-down woman and Joram Roukes’ human-rooster collage. “After the pilot, we were all hooked,” Goodman says.

Portland-based muralist Gage Hamilton was brought on as curator from the get-go. “Gage started out doing boots-on-the-ground inventory,” says Benzikry, “taking stock of buildings’ surface quality, thinking about what materials would be needed, surveying murals in other cities and considering appropriate artists.”

Hamilton’s “boots-on-the-ground” role also led to how SODO Track got its name. “I was walking on train tracks the whole time, hearing the ding-ding-ding of the warning bell,” Hamilton recalls. “But I also liked the idea of this transit corridor as a race track.”

Designed to be seen from a moving bus or train (or while biking or walking along the paved trail), the murals are painted on a huge scale for greater graspability as people whizz by. Some pull the eyeballs along via bright bursts of repeating geometry, flora and fauna. Others feature text, such as Zack Yarrington’s tricky faux-palindrome “EVLOVE” and Georgia Hill’s black-and-white promise, “I’LL BE THERE SOON.”

“From the start we wanted SODO Track to be part of the international street art conversation, but also something particular to Seattle,” Benzikry says. While many other cities have thriving mural scenes, Seattle’s is the only one that now boasts a linear parade of murals by an array of different artists. And while in other places, murals can be harbingers of urban renewal, and all that comes with it (“one person’s revitalization is another’s gentrification,” Benzikry notes), because of the industrial zoning in SODO, that is not at issue here. “These buildings will never be turned into condos,” Hamilton says. “It’s not zoned residential.”

But as Hamilton is well aware, that doesn’t mean people aren’t living there. He encountered many homeless people while working on the murals, many of whom, he says, voiced interest and enthusiasm about SODO Track. “It seemed to give them some pride in their area,” Hamilton says. “Some of the guys offered to watch over the murals.” Members of SODO BIA, 4Culture and Urban Artworks (which helped execute many of murals) will also be on watch, using a maintenance endowment fund to buff out defacement within 24 hours.

There are still a couple hold-outs along the SODO Track — businesses that didn’t participate for various reasons. But organizers are confident now that the corridor is a striking success, they’ll join in too. “It might be piecemeal, but the goal is to get the whole corridor covered,” Benzikry says. Calling herself “thrilled and amazed” by the full effect, Goodman agrees. “We haven’t given up on the ones that haven’t said yes yet,” she says. “We are not stopping.”

The two-mile SODO Track is located between the stadiums and West Seattle Bridge, along 5th Avenue South from just north of Holgate Street to Spokane Street. It can be seen while riding Sound Transit Link light rail or Metro Transit buses 150 or 594. The trail can also be walked or cycled.