Despite a hazy skyline, Seattle’s tourism industry says it hasn’t taken a hit. But it is taking precautions. 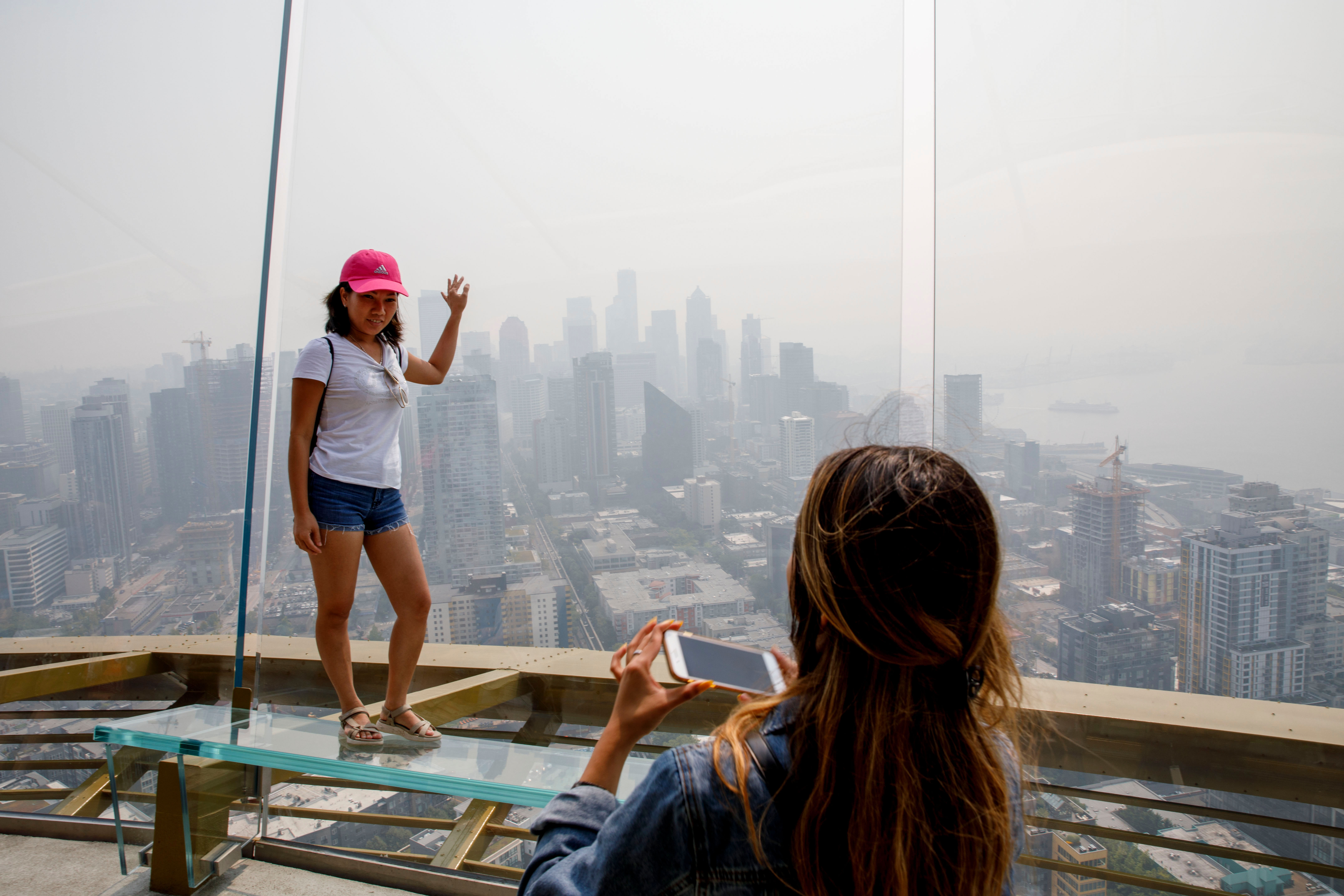 Hope Nguyen, left, of Houston, TX has her photo taken from the Space Needle observation deck on Monday, August 20, 2018 in Seattle, WA. Haze from wildfires caused a decrease in air quality in the area. (Photo by Sarah Hoffman/Crosscut)

Tourists boarding the elevator to the Space Needle’s observation deck on Monday saw something different than they might have expected when they made their travel plans. Or didn’t see. They couldn’t see across Lake Washington to Bellevue. They couldn’t even see Lake Washington. Instead, they saw hazy skyscrapers, accompanied by a reddish glow and a muted horizon.

The guides who inform and entertain crowds during their 43 second trip to the top had revised their usual spiel too — on one trip there was talk of air quality index numbers, the hazards of outdoor exposure and suggestions for indoor entertainment in the city. One guide reminded visitors that the winter rains have made Seattleites good at finding indoor distractions. Another wore a black mask, as many have around the city, to filter out the smoke.

“I’ve never seen smoke in this state before,” said Warren Jones, a tourist from California who had visited the city a few times before. He had arrived in Seattle with his wife a few days ago for his niece’s wedding and now stood in a long line for the elevator ride up.

The view from the Space Needle — one of the city’s main summer attractions — have been obscured by smoke from fires in eastern Washington and British Columbia since late Sunday. Jones had traveled from the San Bernardino mountains, an area lately affected by a number of wild fires, and added that Seattle looks “pretty much like it was [in San Bernardino] when we left.”

Near Jones’s home, the air quality on Aug. 21 was moderate. In Washington, it was worse. The current smoke screen is the second of the season. Last week, central Washington’s air quality was already deemed unhealthy for everyone. Now, Seattle’s air quality has reached that level too. Some observers have begun pointing out that the air in Seattle is worse than it is in Beijing as a shorthand of just how bad it has become.

The eerie hue of the midday sky is a replay of what Seattle saw last summer as well: hazy skies and falling ash, then largely due to a rash of fires in Eastern Washington and Oregon. The smoky season has been a rarity until recently, but some fear that smoky weather could become the norm in Washington’s future.

But for now, much of the views that make Washington appealing for visitors like Jones have been completely obscured by heavy layers of smoke, presenting a challenge for a tourist industry that brings $10 billion of business to the city each year. Expectations have been turned on their heads. Visitors at the Seattle Center, for instance, said they were skipping the Needle for the day, opting for indoor exhibitions like the nearby Chihuly Garden and Glass exhibit instead.

Visit Seattle Public Relations Director Kauilani Robinson notes that some tourism businesses that work with the marketing nonprofit have adopted policies to accommodate for the smoky weather. Chantelle Lusebrink, Visit Seattle’s public relations manager, added that they’d received several emails, calls, and social media questions from people concerned about the cause of the smoke and its effects. Visit Seattle has returned such queries with a list of tips that include monitoring the air quality, avoiding outdoor exertion, and ensuring that any flights they might have booked aren’t delayed due to smoky skies.

Throughout the rest of Washington, some tourism centers have been dealing with even worse air quality. On the east side of the Cascade Mountains in Leavenworth, for instance, the air has vacillated between unhealthy and very unhealthy levels. There, at the Sleeping Lady resort, masks are provided for employees and visitors alike and the outdoor dining patio has been closed to discourage visitors from sitting outside (and to keep employees safe as well). The resort has also seen some cancellations due to the heavy smoke, said Director of Sales Lori Vandenbrink.

While Vandenbrink said she considered leaving town for Bellingham — the smoke gives her headaches — a quick look at an air quality map revealed that the air quality index rating there was still high, at about 170. She decided to spend some time indoors instead. Still, when driving around town, she sees plenty of tourists going about their business and guesses they feel they don’t have many other options.

“It’s statewide, it’s summertime, and they only have another week before [their vacation] is over,” Vandenbrink says. “You’re going to have to go a really long ways to get out of it.”

For now, avoiding prolonged outdoor exposure seems like the best option. Toni Droscher, a spokesperson for Washington State Parks, says that between the burn ban that’s been enacted throughout Washington since earlier this month and alert systems monitoring air quality, vacationers are adapting.

“Unfortunately, I think people are getting more accustomed to the idea that they can’t have campfires,” Droscher says. “They’re realizing how important it is to be safe.”

Back at the Space Needle, Director of Public Relations Dave Mandapat says that the attraction hasn’t seen an impact on ticket sales.

“The Needle has a 360 view on their website and obviously the view is somewhat obscured by the smoke,” he said. But that hasn’t stopped people from coming up anyways, he says, snapping selfies or family pictures by the glass outer rim of the observation deck.

And perhaps, like Vandenbrink suggested, some tourists don’t have many other options. One Cambodian traveler came to visit his friend in Seattle, a trip they’d planned for over a year. They waited in line at the base of the Space Needle together. Although his Seattle friend had already told him they shouldn’t go up today because of the smoke, the traveler said he didn’t want to miss his chance.

“We were in Chelan yesterday,” he said, noting smoke in that area as well. “It’s everywhere.”