An alliance of interests are pressing Seattle leaders to require transit and housing equity in campus plans. 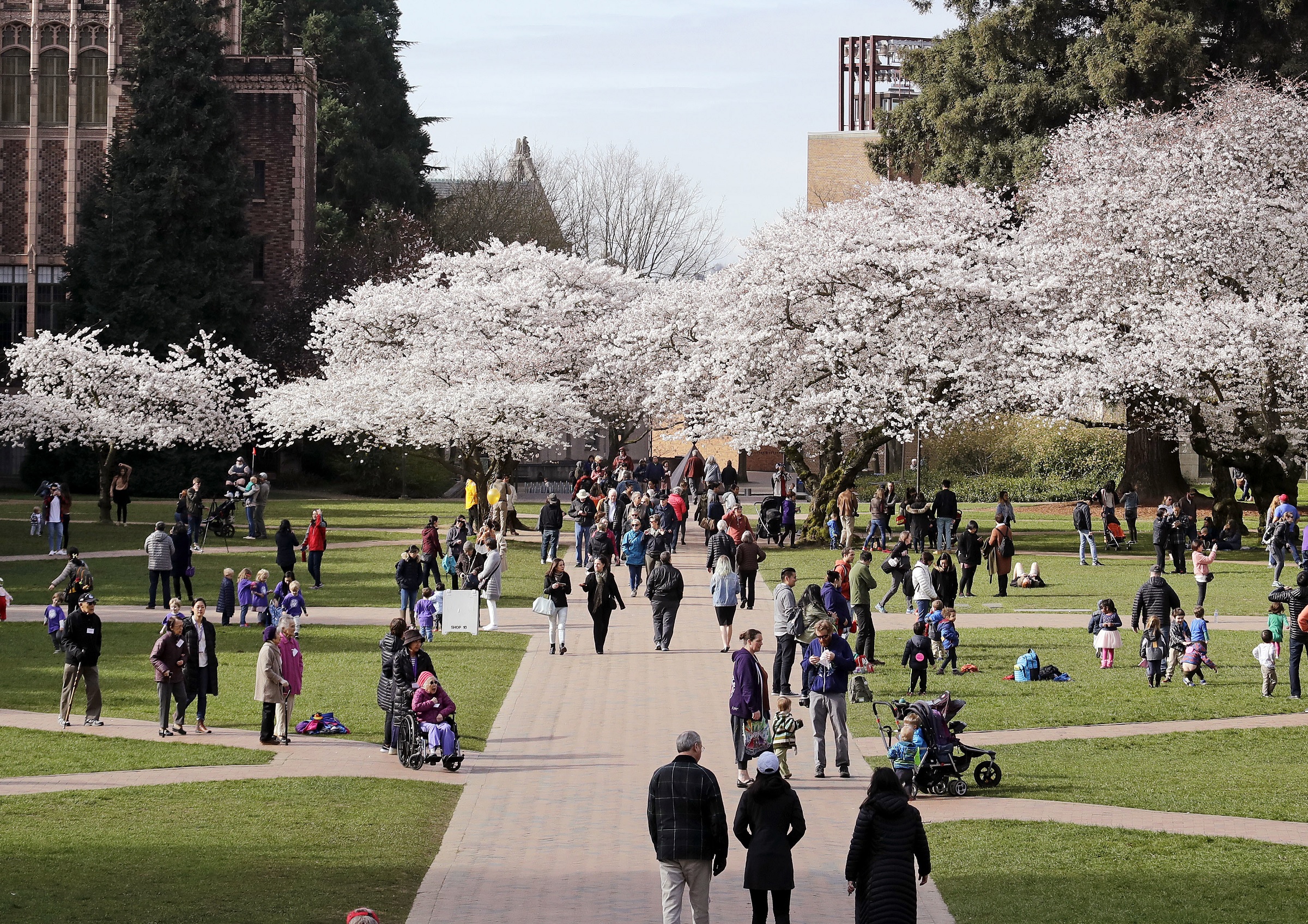 People walk past cherry blossoms on the first day of spring on the campus of the University of Washington, Tuesday, March 20, 2018, in Seattle. The iconic Yoshino cherry trees, over 80-years-old and in good health, are near the peak of their annual bloom. (Photo by Elaine Thompson/AP)

As seems to be true of all things in Seattle these days, the University of Washington is in the midst of a growth spurt. In the next 10 years, the university projects its population of full time students, faculty and staff on the Seattle campus will increase to more than 80,400, up from 72,523 today. To accommodate all those people, UW officials want to build 6 million square feet of new classrooms, offices, research spaces and housing. This expansion is going up, not out, with all those new square feet constructed within the existing campus boundaries

Before the university can move forward with its master plan, though, it must get the Seattle City Council’s approval. The process to do so has opened the door for other stakeholders in the city to weigh in on UW’s growth and mitigation. Many of those stakeholders want to see the city use its powers to make the university do more. But whether the city can do more is an open question.

Like all major institutions — a designation given to universities and hospitals in Seattle — UW must outline its growth and the ways it will mitigate the impact on the environment, traffic and other issues in a master plan. Among the items in the proposed plan, the university has proposed building 1,000 new units of student housing, as well as collaborating with Seattle Housing Authority to build 100 units of permanently affordable housing. It also plans to reduce its student, staff and employee drive-alone rate from 17 percent to 15 percent and build a new park, among other mitigation proposals.

A coalition of campus employees, labor representatives, transportation advocates, religious groups and residents called the U District Alliance for Equity and Livability, saying the school needs to go much further to lessen its impact on the surrounding community and help its workers. They’ve called for UW to pay for transit passes and childcare for its employees, aim for a 12 percent solo driving rate, invest in bike and pedestrian infrastructure, invest heavily in affordable housing on campus and in the surrounding University District neighborhood, and more.

Three years into the marathon planning process, the campus master plan is finally nearing the finish line. It has been through an environmental review as well as a review by city hearing examiners and Seattle Department of Constructions and Inspections staff who made recommendations on revisions and additions to the plan. Those recommendations range from minor, such as how a section of the plan is written, to major, such as suggestions that the university contribute funding to public transit infrastructure.

It’s up to the Seattle City Council to decide if UW’s plan is sufficient as is or if they want to require the university to take on some or all of the recommendation from the SDCI and the hearing examiner. They also must decide what to do with the U District Alliance’s demands before granting the master plan final approval. The Alliance sees the process as a rare chance to bargain with UW, but it will only work if they can convince the council to take up their flag. There is certainly precedent. Major institution master plan approval always comes with conditions from the council. But as the council makes their decisions, they’ll have to tread carefully and come ready to fight if they ask for more than the university deems reasonable.

That is because, unlike other major institutions that go through the city’s master-plan process, UW is a state institution that has long argued that there are limits to the city’s authority over it. When the city raised the minimum wage to $15, the university said it was exempt. It took a State Supreme Court decision last year to get UW to agree to follow the city’s landmark preservation ordinance. (Both the city and U District Alliance cite that decision as evidence that Seattle has authority to impose land use regulations on the university.) To address the university’s unique status, the city and UW created a legal document called the City University Agreement that sets guidelines about the city’s authority over the campus. But that document is open to some interpretation.

SDCI and the hearing examiner recommended 59 changes and additions to the master plan. Of those, the university has agreed to adopt 54 items. Most of the items they oppose have to do with purchasing extra bus service from King County Metro and paying for Rapid Ride Bus infrastructure. Sally Clark, UW’s Director of Regional and Community Relationships (and a former Seattle City Councilmember), points to their agreement on the majority of items as evidence they’re playing ball with the city. When it comes to the requests from the Alliance, though, the university thinks the group is going too far.

“There’s no argument about whether the city can put conditions on the university,” Clark says. “Where the discussion gets more interesting is on some of the items that the Alliance has put forward that are not addressed under environmental review or the City University Agreement.”

Many of the items put forth by the Alliance center on transportation and housing for UW’s lowest income employees. They say the growth and expansion of the campus will not only further strain housing and worsen traffic congestion in Seattle in the midst of the city’s on-going population boom, but that many low-income UW employees count themselves among those struggling to find housing and being pushed to the margins of the city and into the suburbs by the affordability crisis

“People think of the university as a place with fairly high wages, but they have a lot of folks, particularly in the hospitals earning not much more than minimum wage,” says Alliance spokesman David West. According to the Alliance, about half of UW’s 26,000 non-academic employees earn less than 80 percent area median income, and a sixth of them earn less than 50 percent area median income.

For those employees, paying $50 a month for the school’s U Pass transit card program — a partially subsidized benefit for students and employees to get monthly ORCA card transit passes — can be a stretch. The Alliance argues that free transit passes would help get more employees to stop driving and make life easier for UW’s cost-burdened, low-wage workers. As evidence that UW should be doing more as a condition of its master plan approval, the Alliance points to the fact that other government entities such as the city and county provide free transit passes to employees. They also point to Seattle Children’s Hospital which agreed to provide transit passes as a condition of its city-approved master plan.

The Alliance’s call for UW to invest more in subsidized affordable housing is aimed at keeping Seattle affordable to low-income employees as the cost of living continues to rise.

“The fact that they are intent on expanding this campus and bringing in even more people at those [low] wages without dealing with the housing outcomes and, in fact, putting more pressure on housing in Seattle in general, is a problem,” says West.

Clark argues that the Alliance’s asks fall outside the bounds of the process, however. The U Pass benefit is a subject for labor bargaining, not land use negotiations, she says. And housing falls outside the scope of the City University Agreement, she adds. “It doesn’t mean the university is not deeply interested or deeply engaged in those things,” says Clark. “But we would argue that it’s not appropriate for the master plan process.”

The city sees things differently, especially around the housing question. SDCI Land Use Team Supervisor Cheryl Waldman testified at a July 31 city council hearing on the master plan that the Seattle Comprehensive Plan — the city’s guiding planning and land use document — does require the university to build housing to mitigate its impact. She said that when a master plan “results in employment growth, the city should consider income-restricted housing as part of that.”

The outcome of UW’s master planning process — and the shape the next decade takes for university employees and University District residents — rests on that level of fine grain policy interpretation by city staff as well as city and university lawyers. If the city council decides to impose conditions on their approval of the master plan, they’ll have to make the case that it falls within the parameters of the process and the City University Agreement.

For now, it's unclear what conditions the city council might add. At the July 31 hearing, members of the Planning, Land Use and Zoning Committee asked many questions, but gave little indication of the actions they might take. Committee Chair Rob Johnson did not respond to an interview request.

The council committee will propose their conditions of approval in September. The UW Board of Regents and other stakeholders will then have 45 days to respond to the conditions and argue their case for and against. The full council plans to vote on the master plan by the end of 2018.