A view of Seattle from the outside looking in

A Seattle-bred urbanist reflects on the Northwest landscape and what others see in his hometown. 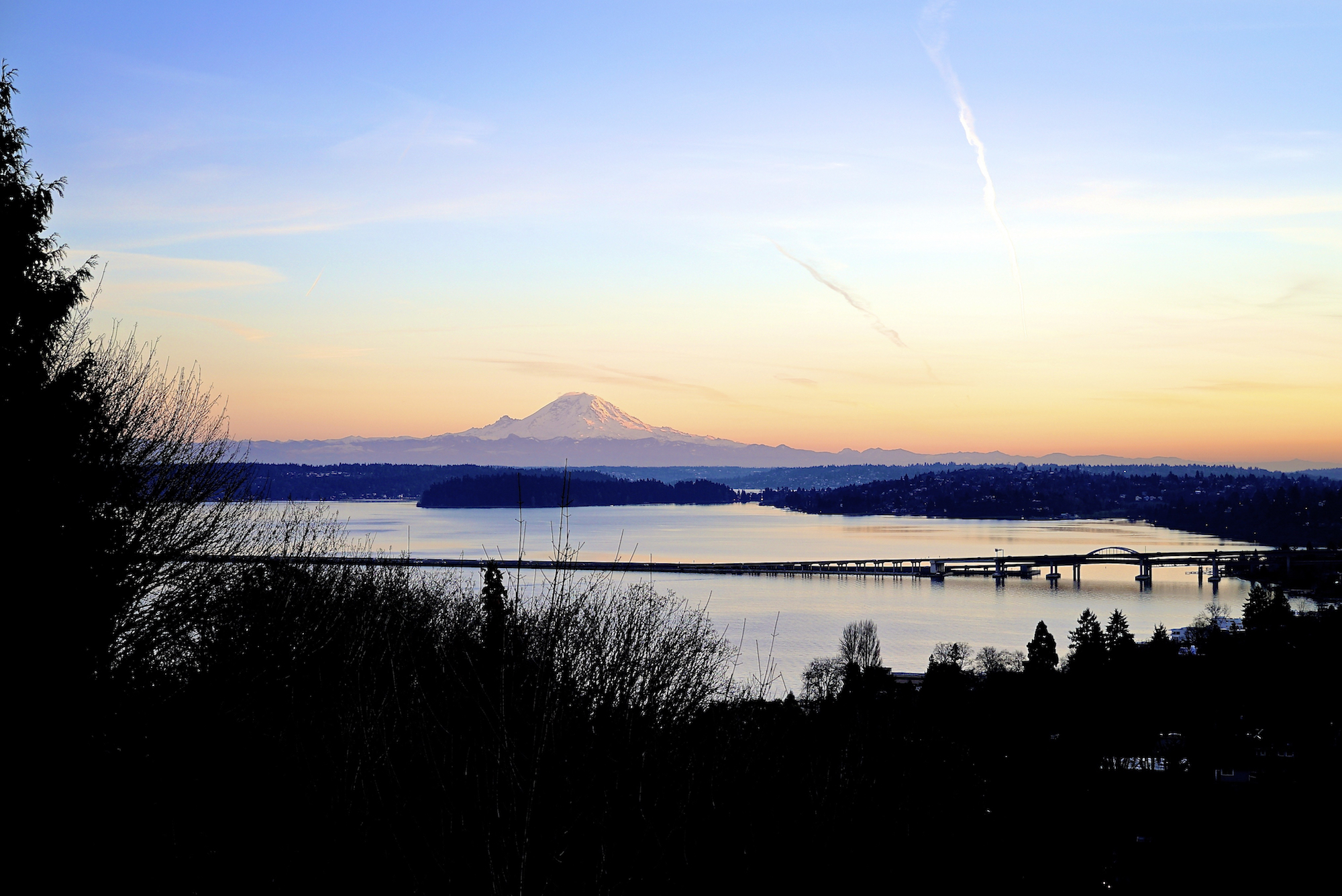 A view of Mount Rainier looking across Lake Washington (Photo by Chuck Wolfe, all rights reserved).

Driving to Lisbon, Miguel, a Portuguese consultant, was talking about what it really means to be a “smart city” when he took a minute to start explaining his music collection. After Miguel plugged his iPhone into a Mercedes radio console and demonstrated the style of his favorite fado singer, Seattle quickly — and inadvertently — stole the show.  As a modern, upbeat song by fado singer Marizia began, he immediately asked, “Do you like Pearl Jam?”

Talking over “Alive,” I told Miguel how Pearl Jam’s members often comment on local environmental issues, such as guitarist Stone Gossard’s reflection about the importance of Seattle’s treasured views.

A few days later, another urbanist consultant and writer, Vitor, introduced a panel presentation in the Portuguese city of Guarda. He told the audience that “different cities are known for different things,” as he displayed the famous and dramatic sit-com view of Seattle from Frasier.  Then, he said, “Seattle is known for Nirvana.”

It’s worth noting the rank simplicity of these particular overseas encounters. No one mentioned today’s city of progressive politics, housing affordability debates, nor the impact of Amazon. Which raises a question: What is most important to a city’s identity from the outside, looking in?

The Seattle stories continue. In Brisbane last October, an Australian student accurately predicted the reasons behind the downfall of the 2017 Seahawks. Some weeks ago, in Cairns, Australia (where I was serving as a Fulbright Specialist), my environmental health colleagues referenced several Gates Foundation efforts and grants relating to tropical regions.

Invariably, whether or not people in other countries know where I come from, something about Seattle — and its identity — enters the conversation. From grunge to the taste of Starbucks coffee, or the innovation litany from Boeing to Microsoft to Amazon, it usually does not take long to discuss something personally familiar — whether whimsical or stubbornly emblematic — about my hometown.

But, the narrative often seems stale and stereotypical, lacking an authentic, sense-based perspective of sight, emotion and memory. Such discussions deserve more than cliché, and should center on an unimpeachable, objective Seattle attribute for all of the world to see — and perhaps hold out as a feature that every city should have.

The focus? More than the dock from Sleepless in Seattle. Rather than the novelty of the first automatic car wash — or powdered milk — as touted in Seattle Magazine’s 2016 “50 Things that Seattle Gave the World,” it is important to return to Stone Gossard’s reflection, and Vitor’s use of the Frasier view. Seattle’s “look and feel” is key.

What, and how, we see defines the structure and context of urban identity. Think of cities and their symbols, from Sydney’s harbor to the canals of Venice, the memories they define, and the commerce and tourism they drive. For those who have never seen Mount Rainer, Lake Washington or Puget Sound, the importance of an incomparable natural palette is lost, along with the perspectives of Seattle-area residents who have written about the importance of what we see as defining the essence of a place.

In particular, two local authors have characterized Seattle based on view, water and an omnipresent green. In a 1998 Architectural Digest essay, “Seattle’s Son,” David Guterson recounted his childhood perceptions of Seattle, framed by many different Mount Rainier views. Jonathan Raban often references his arrival from England in 1990, his long-term fascination with most “watery” city he had ever seen, and his observations that Seattle — even as it has further developed — benefits from a natural fabric of interspersed green. Raban’s salient point: Seattle has exported so much to the world, and, so, it’s sometimes now hard to distinguish Seattle from other places, given omnipresent Starbucks logos, Microsoft devices or Boeing jets. Not to mention cities such as London and Melbourne with Ferris wheels on the water.

But Seattle’s signature location and setting — however rearranged by the regrades of the past, Freeway Park, or a pending James Corner-led waterfront remake — remains for all to see.

Seattle views are more than brief, elite glances from a balcony. Understanding Seattle’s geography also requires movement to vary perspective, often from a public transportation system that spans both land and water. Buses, cars, bicycles and, soon, light rail combine with floating bridges and ferries, to provide an integrated approach to regional travel. A Seattle commuter sees a special and authentic environmental mix, with vistas of water, mountains and skylines.

Cross the I-90 bridge and look south to see the aesthetic treasure of Lake Washington and Mount Rainier, mixing with a naturally occurring green that lives on even with the rapid urban growth of recent years. Look north when it’s clear and see the lake and the Cascades, or Seattle and Bellevue on either side. It is no wonder that the early 20th century Olmsted park system design inevitably tracked John Charles Olmsted’s careful research around vistas and water views.

A stunning view cuts across class and space and time, evoking the history and landscape of all those who have been here, including the first peoples to live around Puget Sound.  A classic view becomes embedded in memory as the symbol of city’s impact on those who see and remember its essence. Despite Seattle’s growth and change, its setting remains an incomparable asset from vantage points across the city, and an exemplary resource for those who look from across the world.