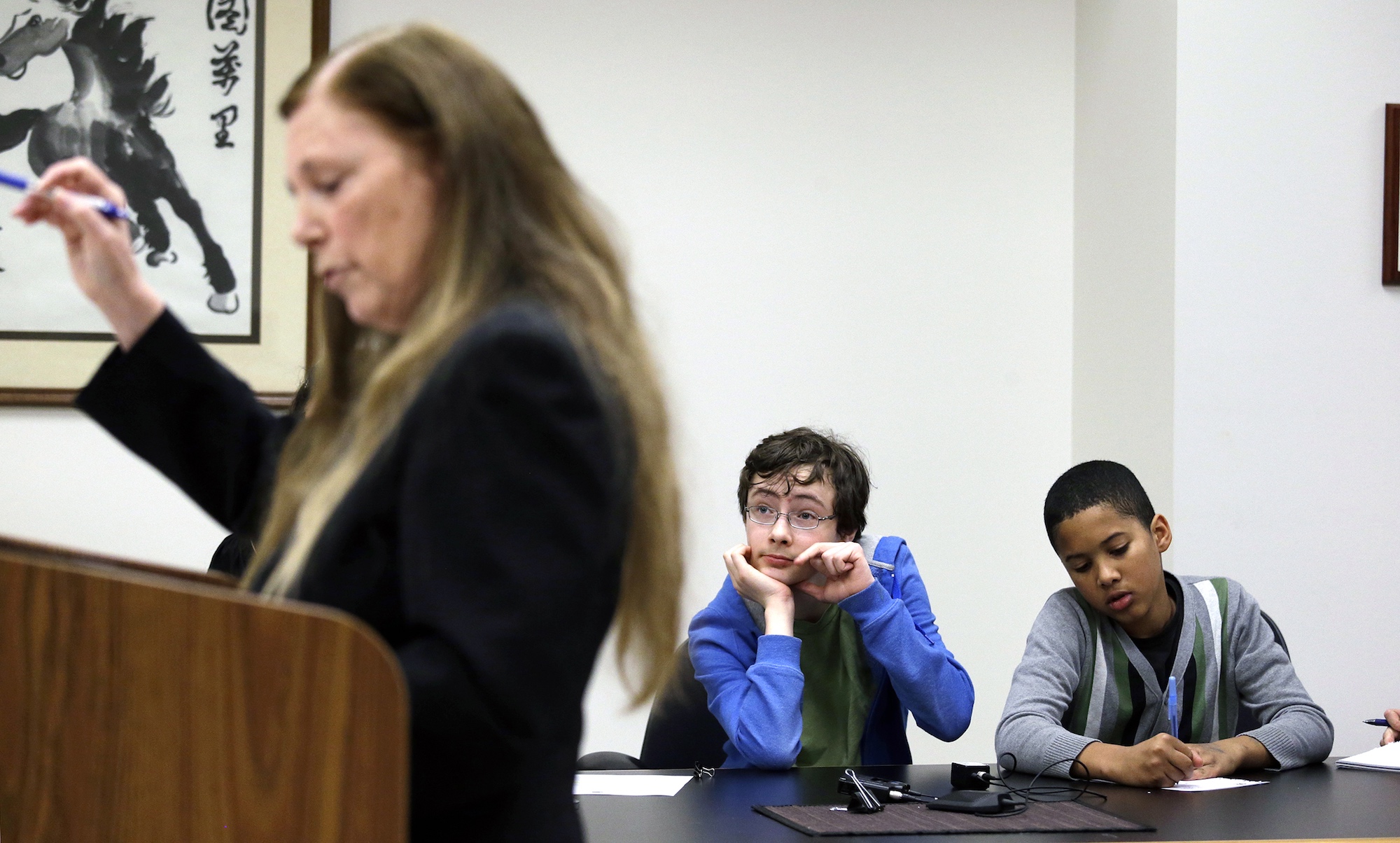 Petitioners Gabe Mandell, 14, center, and Adonis Williams, 12, look on as state Department of Ecology attorney Katharine G. Shirey speaks at a court hearing Tuesday, Nov. 22, 2016, in Seattle. Eight children were asking a Seattle judge to find Washington state in contempt for failing to adequately protect them and future generations from the harmful effects of climate change. A judge ruled this week against requiring action by the state to protect children from global warming. (Photo by Elaine Thompson/AP)

A group of young climate activists who asked a court for protections from climate change have received their answer from a Seattle judge: lawsuit dismissed.

“The court concludes the issues involved in this case are quintessentially political questions that must be addressed by the legislative and executive branches of government,” King County Superior Court Judge Michael Scott wrote Tuesday. “These issues cannot appropriately be resolved by a court.”

Plaintiff Jamie Margolin, the 16-year-old founder of the Zero Hour organization that recently organized a national youth climate march, feels that Washington government is “being incredibly hypocritical.” She told Crosscut that a recent tweet of hers summed up her frustrations: While Washington government often calls itself progressive among environmental movements, she’s not seeing enough action.

“They let our bill die in committee and didn't even give us a vote,” she said, punctuating her statement about the state Legislature with a sigh.

Alluding to a comment made by 17-year-old plaintiff Wren Wagenbach about the decision, Our Children’s Trust Attorney Andrea Rodgers said, “The kids are heartbroken.”

The young people’s complaint filed in February demanded the near-elimination of emissions by mid-century in the state, claiming that the young plaintiffs have a constitutional right to a “healthful and pleasant environment.” Slow responses to the effects of climate change, they said, were an affront to that right.

The 13 kids behind the suit, Margolin included, aren’t new faces in Washington courtrooms. Some of them have been lobbying and pressing the courts for similar rights for years, represented by Our Children’s Trust, a nonprofit that has brought suits in a number of states and federal court. They’re part of a larger wave of young climate activists in the United States pushing for stronger government action against climate change.

The state of Washington had opposed the activists’ claim of constitutional protection. Andrew Wineke, the state Department of Ecology’s air pollution spokesperson, agrees with the decision and the judge’s encouragement of other steps to protect the climate.

“We agree with the children that filed the lawsuit, that we need to do more to fight carbon pollution and we need to do it soon,” he said. “There’s no disagreement.”

While Wineke and Scott say that such issues can’t be fixed in a courtroom, the young activists believe that their right to a healthy environment is already guaranteed by the state’s constitution and should be argued through a lawsuit.

“These are kids who, the last two days, have been told to stay inside, who have to walk carrying their inhalers from their houses,” attorney Rodgers said, referring to the unhealthy levels of wildfire smoke that settled over a large chunk of Washington in recent days. “For a judge to tell them to be optimistic, there are no words for how devastating and atrocious that is for these kids to hear.”

Margolin said that she has friends who are heavily impacted by pollutants in the air and climate change. The recent wildfire smoke in Seattle meant that a friend of hers with respiratory problems couldn’t leave her house without a mask. It was, for Margolin, a stark reminder for what was at stake. It’s also part of the reason she dislikes comments implying that young activists like her are only spokespeople for environmental groups or other adults.

“I was the one who actually dragged my parents to these meetings,” she said of her initial exploits into environmental activism. “If anything, we’re trying to influence the adults to stop this.”

Our Children’s Trust says it also has pending climate actions on behalf of children in eight other states. And it is representing 21 youth activists bringing up a similar case against the federal government, a case whose trial is expected to begin Oct. 29.

Rodgers said the King County court decision will be appealed.

“When I was a little girl, I didn’t have to spend time in a courtroom,” Rodgers says. “These kids are given a different childhood and a much different future.”

Margolin doesn’t believe that she, or the other plaintiffs, can opt out of this issue.

“I don’t like being a kid up against the government, but do I have a choice?” She asks. “No.”