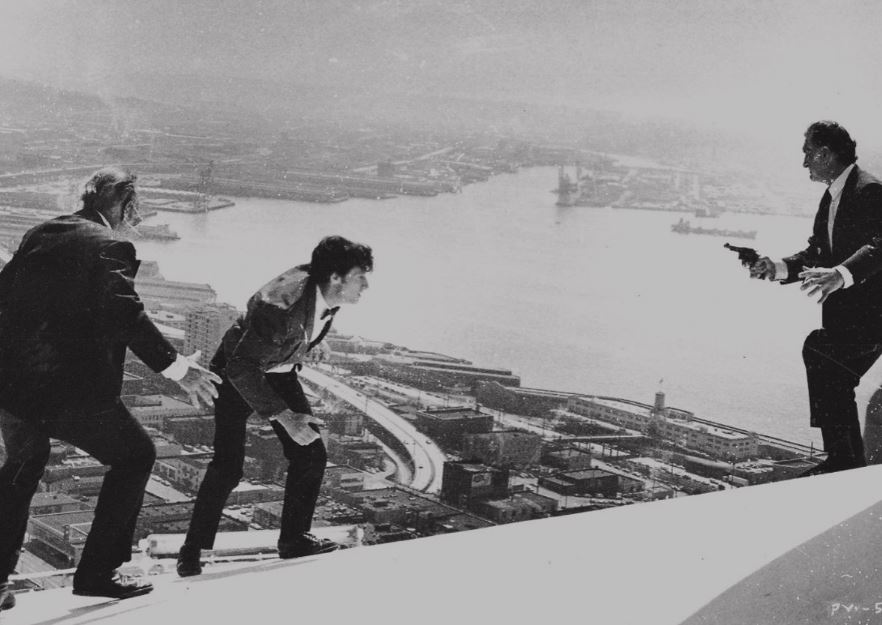 Not content to merely wow audiences from Seattle to NYC with their lovely and lulling compositions, locally grown brass quartet The Westerlies are sharing their skills and the stage with a younger generation. Known for seamlessly sliding between jazz, avant-garde and Americana (there is never a wasted note in their tightly honed set), the quartet is inaugurating a four-day festival that includes workshops for musicians of all levels, community engagement events with the youngest of brass fans, and of course, concerts. Westerlies members (Riley Mulherkar and Chloe Rowlands on trumpet, Andy Clausen and Willem de Koch on trombone) will be joined by guests including eclectic vocalist Theo Bleckmann, singer/songwriter Kate Davis and young spoken word poets Troy Osaki (a triple Grand Slam winner) and Azura Tyabji (Seattle’s newest Youth Poet Laureate). If any event demanded a heralding trumpet, it’s this one. —B.D.

Choreographer Jerome Robbins (1918-1998) was a titan of both ballet and the American musical and Pacific Northwest Ballet’s Jerome Robbins Festival will explore the full range of his career. Unusually for PNB, the fest offers two different programs to choose from during its nine-day run. Program A includes a PNB premiere, “Other Dances,” set to Chopin piano pieces, plus revivals of Robbins’ “Afternoon of a Faun,” “In the Night” and “West Side Story Suite.” Program B brings back “Dances at a Gathering” and the backstage-histrionics parody, “The Concert (or, The Perils of Everybody).” PNB director Peter Boal has a 22-year professional connection to the Robbins legacy, starting at age 10, with his appearance as Cupid in Robbins’ ballet of “Mother Goose.” In his program notes, Boal remarks, “The man is no less interesting than the choreographer. Through a series of lectures, panel discussions, writings, and a documentary, we look at how a somewhat tortured artist grappled with success, sexuality, doubt, and mistrust of his talent throughout his career. … We proudly celebrate the hits and masterpieces, while simultaneously examining the individual behind the art, warts and all.” —M.B.

The annual survey of Pacific Northwest filmmaking returns with new feature films and short subjects, plus some choice archival programs. Contemporary offerings range from a revealing documentary about proposed freeways through Seattle that were defeated by citizen activists in the 1960s (Minda Martin’s Ramps to Nowhere) to eye-dazzling abstract animation (Joanna Priestley’s North of Blue). Historical, social and environmental issues feature prominently in Proof of Loyalty: Kazuo Yamane and The Nisei Soldiers of Hawaii, The Rankin File: Legacy of a Radical (about Canadian socialist lawyer-activist Harry Rankin), and The Trouble with Wolves (about the controversial reintroduction of wolves into Western national parks). Dig into local film history with It Happened at the World’s Fair, starring Elvis Presley (with live commentary by Charles Mudede and Ahamefule Oluo). And you can’t call yourself a true Seattleite if you’ve never seen Alan Pakula’s paranoid thriller, The Parallax View, starring Warren Beatty, with its spectacular opening scene on top of the Space Needle. Evening Star will provide a live musical intro to a new 35mm print of the film struck specifically for this festival. —M.B.

John Okada’s Seattle-set novel No-No Boy, about a young Japanese-American man re-entering American society after opting to spend two years in prison rather than fight in World War II, has become a Pacific Northwest classic. Its lasting power stems from the twisted relationship between Ichiro Yamada and his deludedly strong-willed mother who, well after the war’s end, refuses to believe that her native Japan has been defeated. Okada himself has remained something of an enigma. He served in the U.S. Army, published No-No Boy (his only novel) in 1957, and died young, at age 47, in 1971. University of Washington Press has just published a book, John Okada: The Life and Rediscovered Work of the Author of No-No Boy, which fills in some of the gaps. Edited by Frank Abe, Greg Robinson and Floyd Cheung, it includes a 100-page biography of Okada, nine previously uncollected short pieces by him, and seven critical essays on him. Author Shawn Wong, UW professor emeritus Stephen Sumida and co-editor Abe gather for an Okada celebration that also features some special guests. —M.B.

These offbeat gouache-on-paper paintings by a Russian-American artist who grew up in Seattle are figurative, fanciful and nonchalantly gender-bending. Tereshina’s Island series features long-haired, heavily bearded desert-island castaways who have female anatomical traits (breasts) and a recurring fondness for bright red nail polish. Other paintings (“Hold,” “Pieta”) depict male-male couples in supportive embrace. Occasionally, mysterious rites of passage are suggested. “Circumstance,” for instance, hints at some deflowering or injury that just took place, with the bloodstained branch of a potted cactus placed on a wooden chair. Tereshina’s enchanting sense of color and her knack for constructing big, strange worlds from a handful of elements make her work captivating.  —M.B.

If you go: Linda Hodges Gallery through Sept. 29

This 1995 play by British writer David Hare (Plenty, Via Dolorosa) feels rooted in the Thatcher era — yet there’s something sharply contemporary about its focus on the tension between those whose sole focus is on helping themselves and those who believe they have an obligation to help others if they can. Kyra (Elinor Gunn), the one-time lover of prosperous, married restaurateur Tom (Daniel Gerroll), has abandoned his rich world to live in a drab flat and teach underprivileged children in the eastern reaches of London. The play, directed by John Langs, features two hours-plus of verbal parrying between Kyra and Tom, with some hilarious touché moments. The political thrust sometimes feels forcibly grafted onto the personal drama, but the characters’ conflict over the best way to lead fulfilling lives has real gravitas, and the two lead actors’ performances are lithe and passionate. —M.B.

If Phillip Levine’s “Dancer with Flat Hat” sculpture catches your eye every time you cross the pedestrian overpass near the Henry Art Gallery in the University District, you’ll want to investigate his new show at Prographica/KDR, which features a rich selection of drawings and bronze sculptures. Levine’s pieces are highly stylized human figures caught in action poses that sometimes take a philosophical twist. His solo figures — frequently hollow, with ladder-rungs exposed like internal organs inside contorted bodies — speak of struggle, aspiration and confrontation. His multi-figured constructions comment more on social dynamics. In “Fear and Habit,” eight figures engage in an array of activities on platforms extending from a cylindrical cage. They speak simultaneously of captivity and escape. “3 a.m.,” with its fragments of human anatomy on scaffolding surrounding an empty bed, feels rooted in the realm of the subconscious. This is magical work, exploring dream dimensions. —M.B.