In $700M KeyArena plan, a sea change for a skeptical city

Seattle has been wary of major sports facilities. But the council-approved effort to attract the NBA and NHL to Seattle Center comes with benefits. 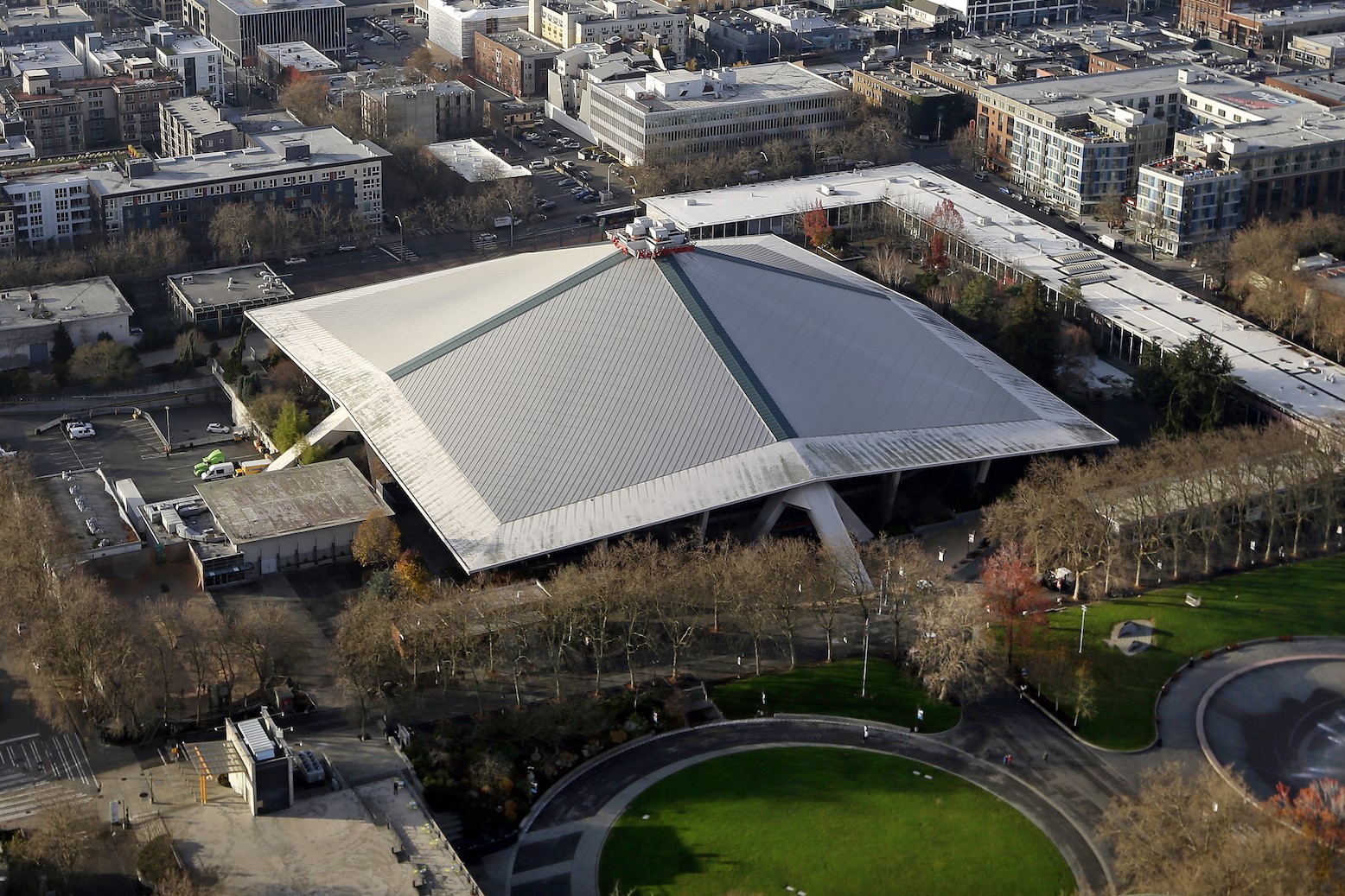 The iconic sloped roof of KeyArena, center, a sports and entertainment venue at the Seattle Center, is seen from above Monday, Dec. 4, 2017, in Seattle. (Elaine Thompson/AP Photo)

Let’s take a moment to appreciate the huge step the Seattle City Council took yesterday when it voted 8-0 to approve the largely private $700 million makeover of KeyArena. The plan, proposed by Los Angeles-based Oak View Group, will build an entirely new facility beneath the original iconic roof, which dates back to the Seattle World’s Fair of 1962. The aim of the remodel is to help fulfill the ambitions of those who wish to bring NBA basketball, NHL hockey and a state of the art concert experience to the city.

Building sports facilities in Seattle has a checkered history, to say the least. We built the multi-purpose Kingdome, then blew it up before it was paid for. We also built Safeco Field and Century Link Field, despite much public opposition that resulted in a citizen’s initiative making it very difficult to spend public funds on future facilities.

More recently, many in the city came out against a plan to pay for improvements to Safeco Field with King County taxes, citing other priorities like solving homelessness. A compromise was worked out by the county council, but the funding battle reflected a deep-seated opposition to giving public funds to wealthy sports owners and their franchises.

Before the idea to revamp KeyArena came about, entrepreneur Chris Hansen came up with the concept for an arena in SoDo that would house basketball, hockey and concerts. The facility, which would have been financed using mostly-private means, was intended to bring “the Sonics back,” but still faced opposition from its would-be neighbors, ranging from the Mariners to railroad and longshoremen’s unions to the Port of Seattle. The worry wasn’t public funding so much as how the arena might clog Port traffic and speed gentrification of Seattle’s blue collar industrial areas. The city council’s opposition to a “street vacation” that would have turned a public right-of-way over to Hansen’s development became a major battleground. The vacation was needed for the project to move forward, but the council had other ideas.

Those idea came from a report indicating that KeyArena could be repurposed as an acceptable site to meet the standards required for NHL hockey and NBA basketball. This solved multiple problems for the city. One, the publicly owned site where the arena currently sits would have been rendered nearly worthless if Hansen’s SoDo arena had been built. Requiring upkeep without generating much revenue, it would have become a money pit. Two, if the roofline and massive supports of the roof structure, protected as a city landmark, could be preserved, they would tent what is essentially a brand-new facility funded by private investors. Third, it would help keep Seattle Center vital well into the future.

That last point is no small thing. Money has been pouring into the Center — for expanding the Opera’s facilities on the old Ice Arena site, for building Chihuly Garden and Glass, and most recently a $100 million investment in upgrades to the Space Needle. (Disclosure: I have been a consulting historian on the latter project.)

The biggest worry about the Seattle Center site has been traffic. Light rail is planned, the Monorail still runs, and grid improvements will kick in. But the development of South Lake Union and Interbay is putting pressure on the Center, Uptown and Queen Anne, along with the normal course of business. Dealing with traffic and parking is a big issue. But it reflects the expanding urbanization in Seattle. Seattle Center was designed to be a “center” as downtown expanded from the retail core through Belltown, the Denny Triangle and South Lake Union. That development stalled until the 1990s. Now the march of high-rises from downtown toward the Needle is striking. After the World’s Fair, the Center was the center of nothing. Soon, it will in the middle of urban Seattle. This development presents new challenges, but its also part of a vision laid out more than 50 years ago.

There are still unknowns ahead. Getting equipment and crews together for construction is already a timing issue, but any mega-project has its challenges. Most of the risk is on the private partner, Oak View. Will Seattle and its private arena team actually get an NHL and an NBA franchise? As we know from past experience, the world of sport facilities and franchises changes: stadiums are more ephemeral then they used to be as business models shift, franchises go through cycles of popularity. In this case, though, the onus is on the private sector to benefit the public, not the other way around. That’s a sea change that’s encouraging.

Now if we can just get them to drop the KeyArena name and return the building’s original moniker: The Coliseum.