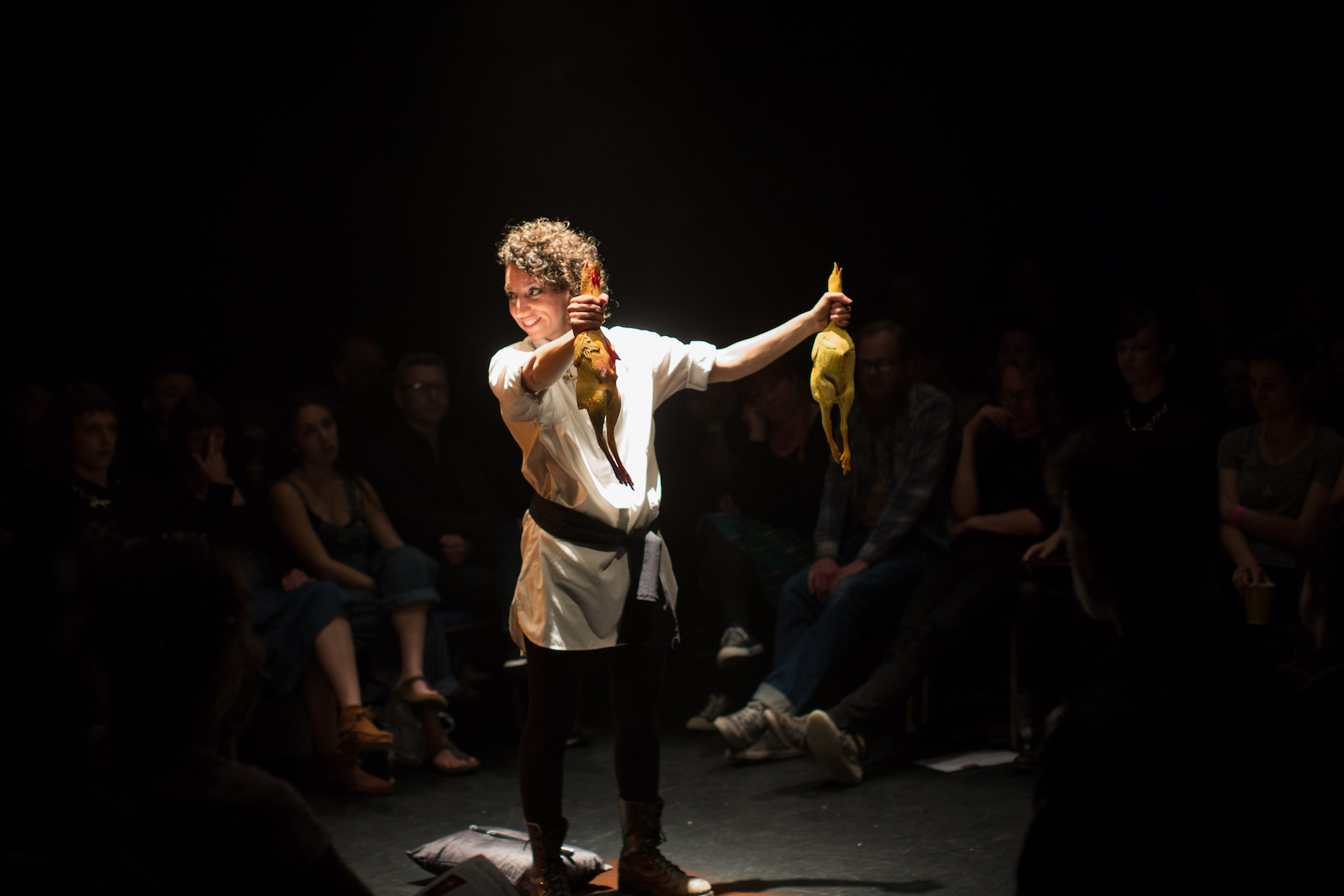 Rachel Mars performs at On The Boards this week. (Photo by Claire Haigh)

British theatre maker, comedian and armchair sociologist Rachel Mars opens the season at On the Boards with an intimate exploration of one of the most popular Seven Deadlies: envy. But rather than shaming us for this less than attractive impulse, Mars instead crafts a darkly humorous celebration of the competitive spirit. She’s buttressed by a Greek chorus of sorts, in the form of four women surrounding her at North, South, East and West, who sing out the sources of our discontent (“My friend who doesn’t get hangovers…”). In the end, she conjures a sort of re-branding for envy, an embrace based on the fact that it’s part of what makes us human — and maybe even inspires us to be better. —B.D. 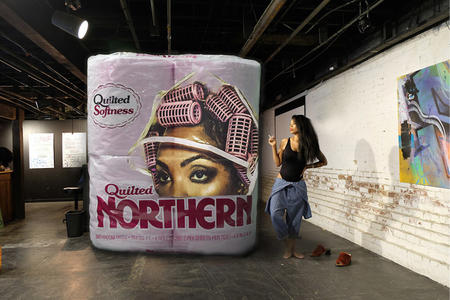 This year marks the City of Bellevue’s 14th Bellwether arts festival, curated for the first time by Seattle-based art-provocateurs SuttonBeresCuller, who are bringing many changes over the bridge with them. (Read our full story on how Bellevue aims to earn arts cred with the revamped event.) For starters, the collective has added a month-long exhibit at Bellevue Arts Museum, which features the work of edgy Seattle artists, such as Tariqa Waters (her installation, “Quilted Northern,” is an eight-foot-tall package of pink toilet paper), fabric artist Joey Veltkamp (whose oversized quilts depict the Bellevue exit sign and the Blue Angels), street artist Baso Fibonacci (with a mural that brings nature back to the Light Rail construction pit) and installation artist Sarah Kavage (whose “Fertility Rites” is a clutch of “artisanal lipsticks” made from the artist’s blood). From September 14-23, the action expands to Bellevue City Hall, Compass Plaza and the Downtown Park, with performances and poetry around the city’s urban core, including appearances by Seattle poet-scientists Vis-à-Vis Society, Iranian artist Sara Rastegarpouyani and legendary performance artist Guillermo Gómez-Peña. —B.D.

If you go: Bellwether’s free, citywide outdoor festival of sculpture and performance is Sept. 14-23. The accompanying Bellevue Arts Museum exhibition runs through Sept. 30. ($12-$15)

Music director Ludovic Morlot kicks off his final season with the Seattle Symphony with a program of three resonant works. One of them highlights the keyboard talents of Symphony favorite Jean-Yves Thibaudet, who will tackle Aram Khachaturian’s “Piano Concerto,” a sublime 1936 work that incorporates Armenian folk influences and sonorities. The other items on the program: Mussorgsky’s “Pictures at an Exhibition” and Khachaturian’s “Sabre Dance” from his ballet Gayane. You can spend big bucks to take part in the Opening Night Gala, which includes dinner and dancing. But the concert itself is not extortionately priced — and it looks like a good one. —M.U.

The 2004 presidential candidate and former Secretary of State in the Obama administration has a new memoir, Every Day Is Extra, in which he touches on family matters (starting with his father’s death from cancer and his grandfather’s suicide), his experiences in the military (as an American soldier in the Vietnam War and, later, as spokesman for Vietnam Veterans against the War), and his political career (including his and John McCain’s toying with the idea of running on a cross-party presidential ticket together). There’s plenty on Kerry’s globe-hopping years as America’s top diplomat, as well. A quick browse of the book’s opening chapter reveals that his writing is intelligently nuanced and gracious. —M.U.

A Latinx couple — the thirtysomething Pablo and Tania — moves into a stately Washington D.C. neighborhood next door to Virginia and Frank, an older White couple with grown children. Things are dandy and everyone is happy; chocolate is given, wine is drunk, pleasantries are exchanged. But when the younger couple needs to host an important work barbecue and they suddenly decide to facelift their backyard, the couple discovers their neighbors' yard has encroached into theirs by 2 feet. 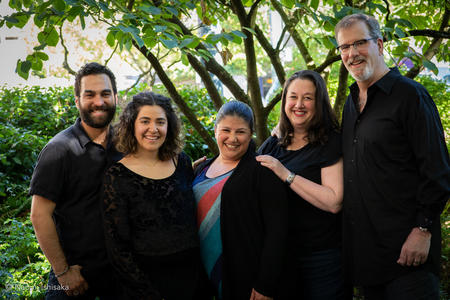 And the fighting begins, turning a battle over a shared property line into one of the smartest, wittiest and most authentic pieces of theater about race and class that I've seen in a very long time. I spent much of the evening trying to scribble down lines from the comedy (written by Karen Zacarías) onto my program so I could remember them until I quickly realized I was having so much fun, I needed to just go see the Intiman production again. Who knew an argument about biodiversity and native plants could provide the perfect framework to spar about immigration, colonialism and whether an insult hurled in Spanish can really be an insult if you have no idea what was said? The sort of cultural activity that begs to be shared with a friend so you can talk about it over drinks after. You will laugh and, just as satisfying, you will think. —F.D.

Toronto painter Janna Watson’s work is entirely abstract, yet it taps subtly into the moods and perceptions of personal experience. Her medium is mixed media on panel, sometimes with a glossy layer of resin applied to the surface. Gazing at the resin-coated pieces is a little like observing organic intuitions caught in the confines of an aquarium. The shapes are restless, dynamic and beguiling, but they retain a sense of mystery — mystery that’s only partly explained by her titles: “Each Day Has a Climax To It,” “Touching Hot Things,” “Moving Slowly in a Dark Room.” This is captivating work that, in the artist’s words, “uses abstraction as both an escape from and return to the real.” —M.U.

If you go: Foster/White Gallery through Sept. 22

Ed Kamuda: Messengers from the North

This Bellingham artist’s playfully feisty Pacific Northwest landscapes have an affinity with the work of Paul Klee and Arthur Dove. Yet they’re clearly a home-grown product. Kamuda, who is self-taught, uses a palette knife, not a paintbrush, to achieve his effects. His paintings are colorful and eccentrically weighted, with deliberate incongruities of scale that give them an antic energy. In “Northern Dance,” a tree, a house and a few heavenly bodies — some spherical, some diamond-shaped — cavort in a daylight sky. “Lummi in Winter” shows the silhouette of Lummi Island with a towering glacier looming up behind it. “Rhythmic Nights” feels like a nod to Van Gogh’s “The Starry Night,” but with ruddy madrona trunks, rather than conifers, framing its night-sky. Kamuda’s farm landscapes — some rolling (“All Along the Way”), some neatly rectangular (“Night Unfurled”) — are another source of delight. —M.U.

If you go: Harris/Harvey Gallery through Sept. 29

Eric Basstein: The Past Is Now

A motorcycle racer, kicking up a cloud of red dust, swerves as if to avoid careening straight of the picture and into the viewer. But that’s not the oddest thing about Dutch painter Eric Basstein’s oil-and-aerosol-on-linen painting, “The Chase.” In the middle of this explosion of energy, we catch a glimpse, in cutout, of some kind of Biblical elder from a Renaissance painting engaged in a struggle with unseen figures at his side. What’s going on here? “I started with the idea of sampling,” Basstein said in a recent email. “The way producers use samples from other songs made me think of doing the same with painting. … I collect all sorts of ‘samples’ from fashion magazines, comic books, other paintings, etc. Then it’s like a puzzle trying to find the right parts to create a new image.” Among the questions these virtuosic mix-and-match paintings ask is: “What happens when we imagine an event from the past?” This is startling work that pays equal homage to old masters (Vermeer, Rubens, Caravaggio) and contemporary visual language such as cartoons, supermarket brand names and, yes, motorcycles. —M.U.

If you go: Treason Gallery through Sept. 28