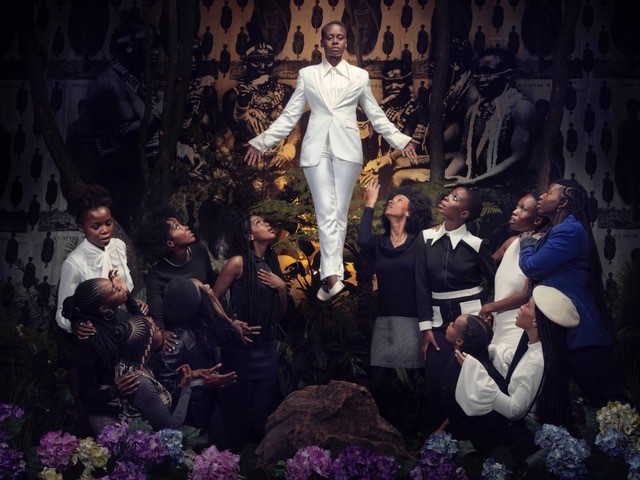 Kudzanai Chiurai: We Live in Silence

Say the words “African art” and most people won’t think of cutting-edge photography or elaborate video installations. But Seattle gallerist Mariane Ibrahim, ever on the global move to search out young African talents, consistently shines a spotlight on amazing artists who defy expectations and stereotypes. Zimbabwean photographer/video-artist Kudzanai Chiurai is the latest of them. His new show, We Live in Silence, features intricately layered visual worlds evoking his country’s struggles with colonial masters and post-colonial strongmen. A pageant-like richness informs his visions of white-robed clergy, armed militia, tribal elders and mysteriously levitating figures. He’s a stage designer as much as a photographer, and the 36-minute video, We Live in Silence, which anchors the show, has some of the obsessive detail and formal rigor of a Peter Greenaway film. Its final scene, in which the camera gradually pulls back from a Last Supper-like banquet to reveal foreground bedlam that seems not to affect the festivities at all, is a stunner. —M.U.

If you go: We Live in Silence, Mariane Ibrahim Gallery through Oct. 29

How do you distinguish fact-based news stories from conspiracy theories? Where, exactly, is the dividing line between real information and feverish rumor? And in the Facebook era, haven’t we all shared postings — some hilarious, some feeding into our own angry agendas — that turn out to be untrue? (Mea culpa: I did it with the cleverly forged MSNBC chyron/news crawl, “Trump worried about Pecker leaking,” when National Enquirer CEO David Pecker was granted immunity by federal prosecutors in exchange for spilling the beans on President Trump and Michael Cohen.) Retired KCTS journalist Enrique Cerna moderates a panel discussion on this thorny state of affairs. Taking part: Pulitzer Prize-winning political cartoonist David Horsey, Seattle Public Library librarian Di Zhang (creator of “The Fake News Survival Guide”), University of Washington Information School assistant professor Jevin West (co-developer of the new UW course, “Calling BS”) and Seattle Times staff reporter Marcus Harrison Green. —M.U.

Music director Ludovic Morlot, now in his final season leading the orchestra, offers an all-French program that includes two masterpieces by Maurice Ravel: Daphnis et Chloé Suite No. 2 (adapted from his ballet of the same name) and the sparkling, jazz-influenced Piano Concerto in G major (with acclaimed British pianist Steven Osborne as the soloist). Also on the program: Debussy’s Printemps (“Spring”) and Marc-André Dalbavie’s La source d’un regard, which pays homage to the great French composer of the late 20th century, Olivier Messiaen. Dalbavie’s title alludes to Messiaen’s epic piano suite, Vingt regards sur l’enfant Jésus (“Twenty Ways of Looking at the Infant Jesus”). Morlot’s exploration of the modern French repertoire has been one of the highlights of his time here. —M.U. 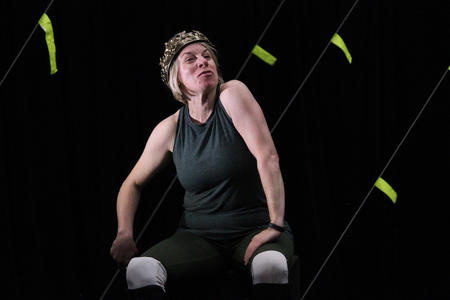 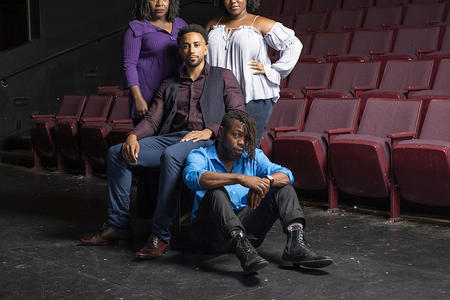 The 13th edition of Tasveer highlights films from Pakistan, but also includes movies from Afghanistan, Bhutan, India, Nepal and Sri Lanka. Opening night’s Cake is a dramedy about two semi-estranged sisters from a wealthy Karachi family trying to work together to deal with their parents’ health crises, and reactivating old sibling animosities in the process. The tone is zestily vulgar and over the top. The festival’s centerpiece, Salam — The First ****** Nobel Laureate, is a weightier documentary about Nobel Prize-winning Pakistani physicist Abdus Salam who had to make a choice between his career and his country when the religious sect he belonged to was subjected to persecution as “a non-Muslim minority.” It’s a powerful tale of making the best of bad odds. Prohibited from using his talents in his native land, he founded the International Centre of Theoretical Physics in Trieste, dedicated to “providing scientists from developing countries with the continuing education and skills that they need to enjoy long and productive careers.” But the knockout of the festival, for my money, is Three and a Half, set in Mumbai and directed Ukrainian Dar Gai, who catapults herself into the same category as the great Indian director Satyajit Ray with this wily, innovative, deeply human film. In three cunningly choreographed long takes, Gai portrays three phases in the history of a building that, over the years, has been a family home, a brothel and a nicely renovated retreat for an elderly couple who still have a few surprises in store for each other. The “half take” lets us see contractors refurbishing the building for its next phase, whatever that may be. The performances are funny, flawless and filled with unexpected twists; Aakash Raj’s cinematography is a tour-de-force. —M.U.

One day, when journalist Jose Antonio Vargas was 12 years old and growing up in the Philippines, his mother and aunt took him to Ninoy Aquino International Airport and put him on a plane to America. Baka malamig doon, his mother said, handing him a jacket. It might be cold there. He didn’t realize until four years later that he was an undocumented immigrant. As a young man he decided to work hard and build a career — and not let anyone know his secret. In 2011, Vargas revealed the truth in an essay in the New York Times, and now he’s telling his full story in a new book, Dear America: Notes of an Undocumented Citizen. As part of Town Hall’s civics series, he’ll talk about the book with Seattle writer and activist Ijeoma Oluo.  —B.D.

Seattle Arts & Lectures opens its 2018-2019 season with an appearance by popular historian Doris Kearns Goodwin, whose book No Ordinary Time: Franklin and Eleanor Roosevelt: The Home Front in World War II won the Pulitzer Prize in 1995. Goodwin’s latest, Leadership in Turbulent Times, focuses on the struggles faced by presidents Abraham Lincoln, Theodore Roosevelt, Franklin D. Roosevelt and Lyndon B. Johnson during times of war, civic strife and protest. Among the questions she asks: Are leaders born or made? Where does ambition come from? How does adversity affect the growth of leadership? Is leadership possible without a purpose larger than personal ambition? Goodwin, a frequent TV commentator, always has something savvy and sensible to add to the conversation. Her appearance is part of this year’s Literary Arts Series, an all-female lineup including Barbara Kingsolver, Katherine Boo, Zadie Smith, Valeria Luiselli and Tayari Jones scheduled to speak between now and May. —M.U.

If you go: Seattle Arts & Lectures at Benaroya Hall, Oct. 1 at 7:30 p.m. (Single tickets are sold out, but season tickets to SAL’s Literary Arts Series, including Goodwin’s talk, are available for $59-$229)

Confession: I had never read Jane Eyre until recently. For whatever reason, my AP English teacher never assigned this in high school and now, I'm wondering, Why the heck not? A female protagonist who is fearless in her choices and who finds her voice starting at a young age. A girl all too aware of class differences and society's expectations, and one who takes charge to find happiness and a future that she wants. The story, which has been widely adapted on film, TV and for the stage, is now presented in a winning production at Book-It Repertory Theatre. Mi Kang is equal parts charming and fierce in her portrayal of Jane, and the story feels especially relevant now in raising notions of what it means to be a feminist. —F.D.

By the Book: 9+ Designers

Art-book designers have to be a little like actors, responding intelligently and intuitively to the roles they’ve been assigned. The trick for them is to serve the artist whose book it is. In this smart show at Photographic Center Northwest, curator Michelle Dunn Marsh alerts viewers to what’s involved. For a book about outsider artist Howard Finster, for instance, book designer Roger Gorman went with handwritten titles and captions on his image-crammed cover. For a book about Andres Serrano, whose photography skirts taboo subject matter in elegant guises, Gorman took a cool, spare, almost forbidding approach. The book-display portion of the show is a don’t-touch affair, but a nearby table lets you browse through books by the designers (including local designer Ed Marquand). Part of the exhibit shows pages in progress, marked up with scrawled notes and measurement corrections, from half a dozen books published by Aperture. Diane Arbus, Richard Avedon, Imogen Cunningham and Mary Ellen Mark are among the artists whose work these book designers showcase to its best advantage. —M.U.

If you go: By the Book: 9+ Designers, Photographic Center Northwest through Dec. 13