The environmental guru talks about the carbon fee's prospects, building a more inclusive climate movement, and how local actions can have global impact. 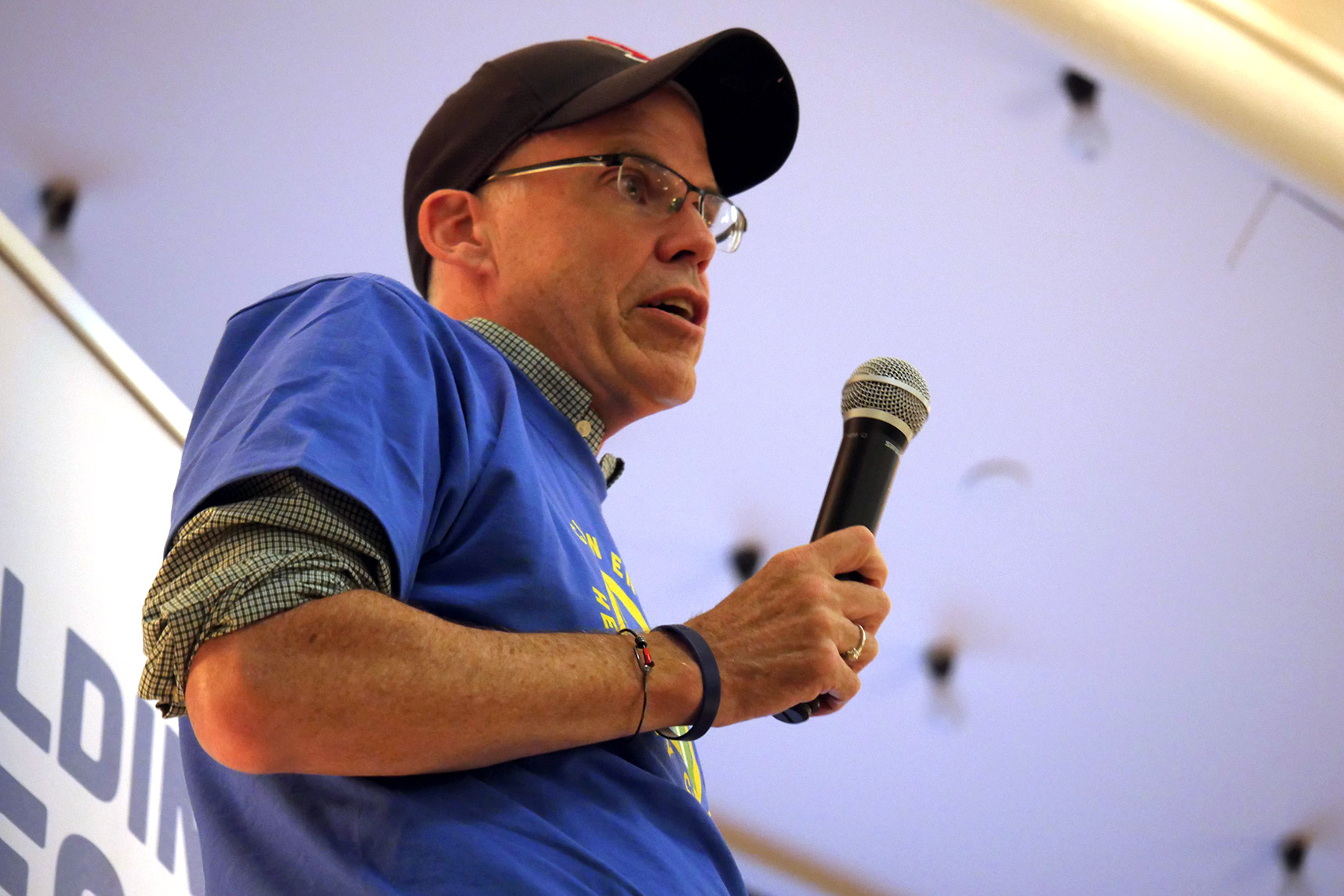 Bill McKibben speaks at an I-1631 rally at Seattle's Town Hall. (Photo by Manola Secaira)

Bill McKibben casts a long shadow in the climate movement. As a longtime environmental advocate, writer and speaker, concerned citizens look to McKibben and his organization, 350.org, to get behind fights that can actually move the needle on climate change. One of those battles — Initiative 1631 — brought him to a rally at Seattle’s Town Hall last week.

Washingtonians’ multiple stabs at passing a carbon tax prove that the state is a testing ground for bold strides on climate legislation. November’s Initiative 1631 (also known as the carbon fee) takes inspiration from its predecessors but also ropes in pivotal communities and leaders who’ve been skeptical of past attempts to curb our state’s carbon usage.

McKibben has supported the carbon fee initiative for a while now, and Crosscut had the chance to chat with him before the rally about the fee’s promise, why the future of environmentalism needs diversification, and the impact regional movements have on the national conversation about climate change.

The following conversation has been edited for length and clarity.

Crosscut: When did you first get involved with Initiative 1631?

Bill McKibben: I always follow events in Washington in part because Seattle 350 has been such a leader around the country and around the world — everything from Shell to the Arctic. So when they sent out the word to me and others that this really remarkable coalition had assembled and that this time around [the carbon fee] was actually a real thing that was really going to work, that got me very excited. The environmental movement has slowly been learning the lesson that it really has to involve everyone to be able to win, and win in the right ways. 1631 is really showing how to do that.

Crosscut: Why do you feel the carbon fee can succeed where other carbon taxes in the state failed?

McKibben: I think it's a much better approach and I think it has a real chance of passing. The oil industry will do everything it can to stop it, but I think that for a country and a state that's worried about the environment and worried about inequality, this is a remarkable, important attempt to do something about both of them.

Crosscut: Something that's been on the coalition’s mind as they've formed their carbon fee has been the exclusivity of environmentalism in the past. It’s been primarily run by an educated, white class of scientists.

McKibben: There's always been this notion that environmentalism is something that rich, white people did. And really, if you look at the polling data in America, the people who are most worried about climate change are African-Americans and Latino Americans. That's because they pay the price the most. I mean, truth be told, if you had figure out who was the environmental problem, you might turn to rich, white people — considering who they keep voting for.

Crosscut: Despite interest from those communities, it still seems like exclusivity has still prevailed. What do you think is key to changing that?

McKibben: Well, I think just this kind of effort that's going on here is key to changing that. You've got to talk to everybody. It's 350.org, we work all over the world, so this is much easier [for us]. It's extremely clear that almost everyone we work with is poor, black, brown, Asian, or young, because that's what almost all the world is composed of. So we've always had that sense very strongly.

Crosscut: Was an international focus something that you thought was key?

McKibben: Yes, we did — that's the reason that we have that odd name. That's the most important number in the world: It's the amount of carbon that can safely be in the atmosphere and a number that you well know we've already passed. But we chose it because we knew we wanted to organize all over the world, and we figured that some English-language name would get in the way. 350 means the same thing that it means in Warsaw that it means in Washington, means the same thing in Saigon and Seattle. We had 30,000 people in the street in San Francisco last weekend, but we had 35,000 people on the street in Kampala, Uganda the same day.

Crosscut: What role do you think smaller cities and regional movements can play in the national conversation?

McKibben: In a totally rational world, the smartest thing to do with climate change would probably [happen] at the largest possible level because it's the largest thing that's ever happened. But clearly that's not happening. We've got a guy in the White House who doesn't even think that climate change is real, so of course he's not going to deal with it. We're obviously going to do nothing in Washington [D.C.] at the moment, so it's really important to do things in the other Washington, you know? And in every place else, and that's really happening.

Crosscut: Do you think states need to fend for themselves?

McKibben: No, I think this is how we work around the fossil fuel industry and their political power. That's what keeps us from getting things down in places like D.C. The oil industry is strong everywhere, and they'll spend a huge amount of money to beat 1631 if they can, but they're less strong in state houses and less strong in city halls than they are in Congress. So there's a chance when people turn up and do the work [we can] beat them.

Crosscut: Do you feel like the Trump presidency was able to tap into something beyond oil company propaganda?

McKibben: I think the Trump stance on climate change is completely unpopular. I don't think even his hardcore supporters outside the oil industry think it was a good idea to pull out of the Paris Agreement. It's obviously ludicrous and he's obviously an idiot. So when he goes, it will be the end of people saying climate change is a hoax. That will go down with him. But that's not all good news because at this point we don't need politicians announcing that climate change is real. That's so obvious. What we need is people willing to do some hard work and stand up to some rich players.

Crosscut: Are there any other causes that people should look out for on the horizon?

McKibben: I think that the three big fights now are on 100 percent renewable energy, keeping [fossil fuels] in the ground and all the different pipeline fights, and around cutting off the supply of money [to] the fossil fuel industry. Divestment and leaning on banks and insurance companies and things — [that’s] going extremely well. We just did a press conference in San Francisco to say we're up over 6 trillion dollars in endowments and portfolios that have divested so we're making some progress. Whether we're [divesting] fast enough—this is a timed test, you know? The world's warming up pretty fast.

Crosscut: Any advice that you'd give to cities?

McKibben: Get out in front. The prize goes out to people who are doing this first and fastest. Seattle's a good reminder of that and has done a lot of good things.

Crosscut: You feel like Seattle has been at the forefront of that?

McKibben: I do. I think there's always more that can be done. I wasn't a big fan of your nice new tunnel and things but Seattle's also done a lot of good things. The world [owes] an immense debt of thanks to those kayaktivists who went out and stopped Shell from drilling in the Arctic.