Bridge over I-90 offers safe passage for wildlife

A new $6.2-million overpass on I-90 near Snoqualmie Pass will restore critical habitat connectivity between the north and south Cascades for wildlife like elk, cougars, salmon, and wolverines. 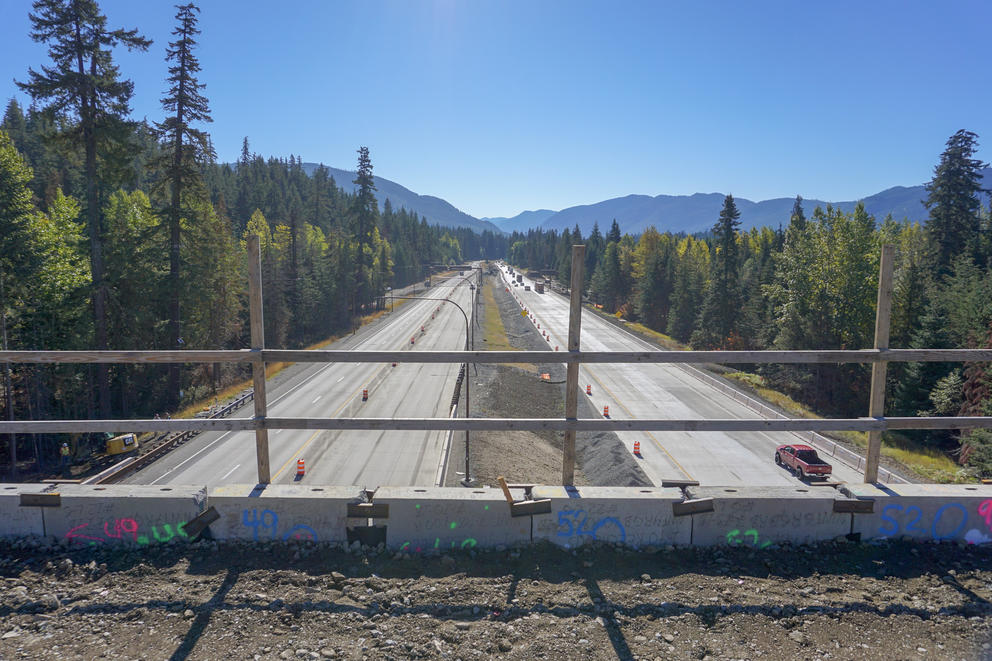 Crawling with dinosaur-size construction equipment and swarming with hard-hatted humans in fluorescent clothing, the 66-foot-wide arc of dirt soaring over I-90 just east of Hyak and Snoqualmie Pass doesn’t look much like a wildlife superhighway yet.

But even with nearly 29,000 cars a day roaring through the concrete tubes below, both the overpass and three nearby riparian underpasses are already providing safe passage for several species that thrive in the mountain ecosystem that straddles the interstate.

“Later this year there’s going to be walls, native soils and plants will take over, and it will be seamless habitat for animals,” says Patty Garvey-Darda, a biologist with the Okanogan-Wenatchee National Forest and an advisor to the Washington Department of Transportation. “The undercrossings have streams in it, and are great for riparian-following species like small mammals, amphibians, and Cascade fox. The overcrossing works well for high-mobility species like elk, deer, bear, and wolves. We’ve got cameras in all of them, so we’ll be able to monitor rare animals like wolverines and martens. The cameras will tell us a lot.”

The $6.2-million overpass won’t be complete until spring, and it’s part of a larger $900 million project that will add two dozen more crossings to a 15-mile section of interstate atop the pass. But it’s already cause for celebration for the coalition of conservationists, government agencies, and construction crews seeking to alleviate congestion, safeguard the road from environmental hazards like avalanches and restore ecosystem connectivity to the north and south Cascades.

“We’ve been advocating for this for over a decade,” Gunnell says. “We thought, there has to be a way to knit the landscape back together for expanding species like wolves, cougars and black bears while improving the lives and safety for people. It was about harnessing a larger effort, to say ‘look, we can build bridges — this is happening.’”

Once ideas were exchanged and plans were set, Washington DOT Assistant Regional Administrator for Design & Construction Brian White says the team turned to the creators of pioneering projects in Banff and Montana, where wildlife crossings have been instrumental in protecting migrating grizzlies, mountain lions, and cougars. As in Banff, fencing all along I-90 will help funnel animals to the crossing.

“The biggest hurdle is always, ‘what do you do with all the traffic,” White says. “Initially, we were trying to get closer to the headwaters of the Yakima. But great data from Conservation Northwest and Central Washington University showed this is where the animals are actually crossing. You need to fit into the context of your environment, and here that means wildlife can walk unimpeded through habitat.”

For many of the women and men working on the crossing, the job represents something more meaningful than your average project. White talks about how his team has gotten fond of deer poking in between their equipment. He says he personally won’t be satisfied until a camera trap documents a rare wolverine.

Work will continue on the project until 2030, and possibly beyond.

“I’m technically retired — I had eight months off,” says Bill Seigle. He spent one month shy of 40 years working for the Washington Department of Transportation. The last three were spent on this wildlife overpass. “I wanted to finish what I started. It’s pretty cool.”