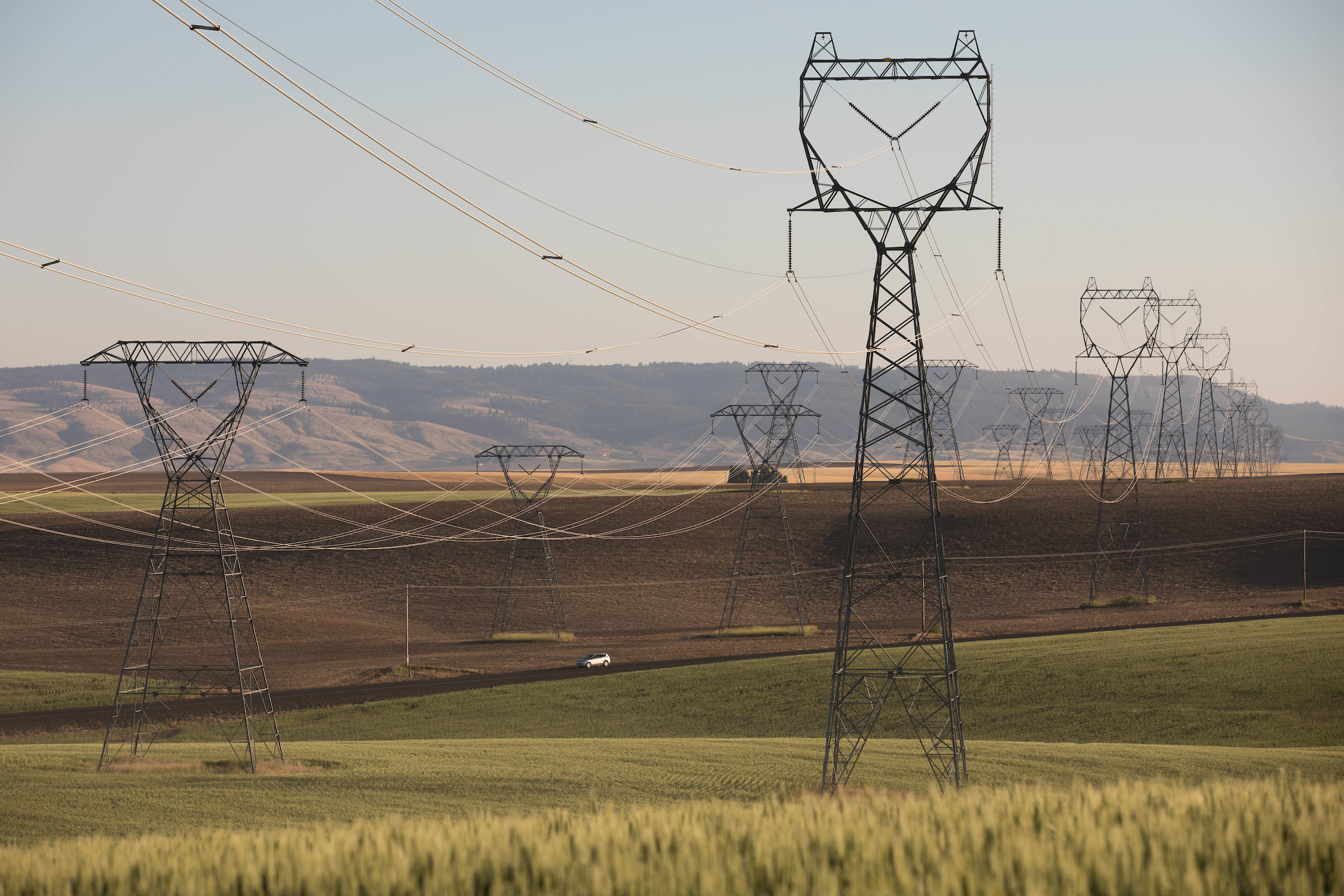 Transmission towers seen along the Waterville plateau in eastern Washington state, July 21, 2017. While it has its own power generating facilities, Seattle City Light also gets some of its power from the Bonneville Power Administration over the regional grid serving the Northwest's needs. (Matt M. McKnight/Crosscut)

For months, even years, Seattle City Light customers have complained about their erratic bills to anyone who’d listen — the utility, elected officials, the press.

Soon, a new avenue may open up: court.

Specifically, the firm points to reports in Crosscut and the Seattle Times laying out issues the department has experienced with its new (and over budget) billing system, which has occasionally created high bills based on estimated meter reads.

As of Wednesday, no lawsuit had been served to the City, according to Dan Nolte, spokesperson for the City Attorney’s Office.

The call for aggrieved customers was first posted in late June of this year.

In an unrelated announcement Tuesday, Seattle City Councilmember Teresa Mosqueda is ordering an audit of the utility department’s billing practices — be they related to the new system or otherwise. Mosqueda said in a statement that her office had heard from customers concerned about their bills.

The audit will be conducted by the Seattle City Auditor, and will look into how City Light prevents erroneous bills, checks the accuracy of bills, communicates with customers, resolves complaints, accommodates payment plans and reimburses customers who’ve been overcharged.

“Ensuring that City Light has clear policies that customers and staff alike understand is important to delivering high-quality service,” said Mosqueda. “My commitment is not only to ensure those policies are clearly articulated and followed, but that we are prepared to nimbly respond to constituent concerns about billing, and are inward-looking, identifying problematic policies and remedying them to best benefit our communities.”

The issues with city’s new $109 million billing system go back to before it even rolled out —more than $40 million over budget.

But when it got up and running, it did not function as intended. City Light employees are supposed to sign off on meter reads filed into the system. But the department fell behind and some readings were never approved.

The more automated system then began rejecting legitimate but unapproved readings in favor of estimates, which were sometimes higher. “The machine thinks it’s correcting, but it’s not correcting well," Joel Vancil, a call taker in the city’s Customer Contact Center, told Crosscut in February.

Additionally, the department fell behind on account transfers and move-in setups, meaning some customers’ first bills were backlogged and, when eventually produced, very large, even if technically correct.

In a statement, City Light spokesperson Scott Thomsen declined to comment on the potential litigation. But he did say the department would work with the auditor to support the review and offered some explanation.

“There have been times when locks have been changed on meter rooms in multifamily buildings and our meter readers have not been able to access them; meter readers were not able to complete a route; gates were locked; or dogs were left out in the yard,” he said. “Situations like that will force an estimate for the reading. Once we do get an actual read, it will show whether our estimate was low or high. If we were too high, the next bill could be very small or have a credit. If our estimate was low, the next bill will account for all the electricity that was used but not paid for in previous billing cycles as well the current billing cycle’s usage.”

Thomsen said the rollout of a new network of “smart meters” will improve the department’s ability to deliver timely and accurate bills.

This comes as utility rates across the board increase — due to rise 4.5 percent annually over the next five years. Separating out what is standard sticker shock with genuinely incorrect bills can be challenging.

Some instances are clear. Olivia Borrows moved into a 350-square-foot apartment near Green Lake last June. The first bill to arrive was outrageous — $6,187.27, due July 11.

“I kind of just laughed because it was completely impossible,” said Borrows, a flight attendant. But then, she said, “I got a little scared.”

Borrows called City Light and the person on the other end also laughed. Within three minutes, said Borrows, her bill was corrected to its actual amount — $45. It’s unclear why Borrows received such a high bill.

Others, though, may feel incorrect, even if they’re right. In a recent City Council meeting, Councilmember Mosqueda mentioned a neighbor of hers who’d received a bill for more than $1,000. But according to City Light’s Thomsen, that bill was accurate.

“The property manager changed the locks on the meter room and did not provide us with access for 18 months, which forced us to estimate usage for that entire timeframe,” he wrote in an email. “Once we got actual reads, the bills reflected electricity that had been used, but not paid for. In those circumstances, we will work out payment plans for up to the length of time that the estimates were in place.”

The lawyer on the City Light case is Matthew Campos, according to his assistant. Campos represents Deadliest Catch star Sig Hansen in the molestation case brought against him by his estranged daughter.

A spokesperson for the firm did not respond to a request for comment, so it’s unknown how many customers may have responded to their call.

Mayor Jenny Durkan has taken a keen interest in issues at Seattle City Light. In a statement responding to the audit, she said, “City Light has faced many challenges; we have been making significant positive progress including clearing a backlog of more than 74,000 account billing issues that created much of the frustration that customers have experienced.”

Her nominee to be the utility’s next CEO, Debra Smith, has her first hearing before the Seattle City Council on Thursday. If approved, she will earn $340,000, on par with what her predecessor Larry Weis earned. Durkan is putting it on Smith, whom the mayor has described as obsessed with customer service, to take control of the department’s issues: “She is what the utility needs at exactly this time – an experienced leader who I trust will make any necessary corrections to ensure the utility is accountable to its customers.”