Did the City Council violate open-meeting laws a second time? 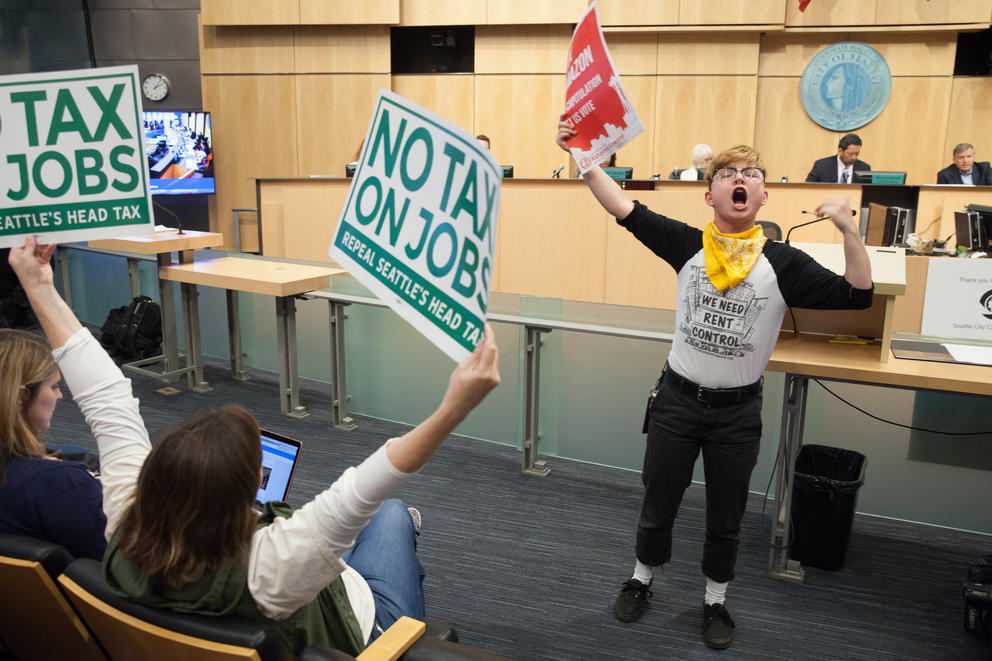 Emerson Johnson, an opponent of repealing the head tax at the end of a city council session voting to repeal the controversial legislation at City Hall in Seattle, June 12, 2018. (Photo by Matt M. McKnight/Crosscut)

Before members of the Seattle City Council were sued for allegedly governing behind closed doors, they may have violated the State Open Public Meetings Act on a separate occasion a month earlier. And on the same issue.

The nature of their communication raises questions about how far council members can or should be able to go in working directly with one another beyond the public eye — and achieving what might be a balance between transparency and productive collaboration.

On May 14, the council was preparing to vote on a tax on large businesses as a way to fund housing and homeless services. In the hours before the vote on what they knew was a contentious issue, council members began circulating an amendment to reduce the proposed tax from $500 per employee per year to $275.

In a text message to Councilmember Mike O’Brien the morning before the vote, obtained through a public records act request, his aide wrote: “[Councilmember] lisa [Herbold] stopped by to make sure you’re good with being with the 8 councilmembers (including you) to sponsor amendment 24?” referring to the amendment to reduce the total.

It was a contentious amendment — opposed by the city's strongest proponents of the tax — made in an attempt to save the entire new revenue stream from a veto.

Under the state’s Open Public Meeting Act, a majority of a governing body may not meet out of public eye to discuss and decide official city business. The act is meant to ensure transparency among elected officials and to give the public an opportunity to weigh in. In the case of the Seattle City Council, that means no more than four council members can deliberate behind closed doors.

That rule extends beyond just physical meetings. “Physical presence by the members of a governing body is not necessary for there to be a ‘meeting,’” according to the state Attorney General’s office. “For example, an email exchange among a quorum of a governing body in which ‘action’ takes place is a ‘meeting’ under the OPMA.”

The text to Councilmember O’Brien shows the occasionally precarious boundaries of the law. Because, via an aide, Councilmember Herbold asked whether O’Brien would like to join with his seven colleagues in sponsoring the amendment, that could qualify as an illegal meeting, say open government advocates; had that number not been communicated, it would not be.

“The fact that it was mentioned that seven other council members were already on board with the amendment makes it an illegal serial meeting,” said Toby Nixon, president of the Washington Coalition for Open Government. “If the question had simply been to ask him if he supported the amendment, without mentioning how many other council members already supported it, then it would have not been an illegal meeting, depending on what Herbold did with the information. You simply cannot have a discussion among a quorum of council members, even through a third party, outside of a properly noticed public meeting.”

The City Attorney’s Office declined to comment on the documents tied to the vote to set up the tax. A spokesperson for the City Council did not respond to requests for comment.

The office is already defending seven members of the city council against a lawsuit alleging a similar illegal meeting in June, which also related to the business tax. After an aggressive opposition campaign to put the tax to voters and after seeing unfavorable polling numbers on the tax, the council decided to repeal it just weeks after it passed unanimously.

In the wake of the repeal vote, the Seattle Times questioned whether the decision to repeal the tax constituted a violation of the law — most damning being a sheet of paper that seemed to show a behind-the-scenes vote tally.

The city was sued twice for its alleged violations — by Seattle attorney James Egan and open government advocate Arthur West. The case looked to be on its way to a settlement, but that was derailed recently after the lawyers representing Egan accused the city of not being forthcoming with all relevant documents. The litigation is ongoing. Attorney for Egan, Lincoln Beauregard, wants the city to admit fault and for the elected officials to be fined.

Katherine George, an attorney and privacy advocate, sees the May communication as echoing what are alleged to be violations around the June vote. “This seems similar to the texts I saw regarding the tax repeal,” she said in an email. “I haven’t seen a case exactly like this, but it raises a serious question about collective intent. Even if communicating through staff isn’t technically ‘meeting’ as a council, it goes against the spirit of the open meeting law to form a majority position outside the public eye.”

The city council often has more than a majority of its members sponsor a piece of legislation, especially during budget season. And just because a council member has sponsored something, doesn't guarantee he or she will vote for it, although they do almost all of the time. Still, following the act at its most literal certainly presents questions about how council members could actually — and efficiently — collect sponsors without effectively coordinating votes.

But Nixon said the rules should still apply and whoever is recruiting sponsors should do so without relaying the thinking of a majority of the council. “[Herbold] can interact with fellow council members individually but should not convey information between or among them, especially when a majority is, or could become, involved,” he said.

The penalty for violating the act is $500 for a first offense, escalating up to $1,000 for subsequent offenses. The council could also be made to revote on an issue, but that would appear to be be moot in this case considering the tax’s subsequent repeal.

by / June 2
Inside Crosscut

Podcast | Pramila Jayapal on her journey from activist to Congress

At this year's Crosscut Festival, the congresswoman from Seattle spoke about the importance of grassroots activism and how to make it effective.