Dr. Christine Blasey Ford and the psychology of buried trauma

How a high-profile testimony of sexual assault can unlock secrets we have kept from ourselves. 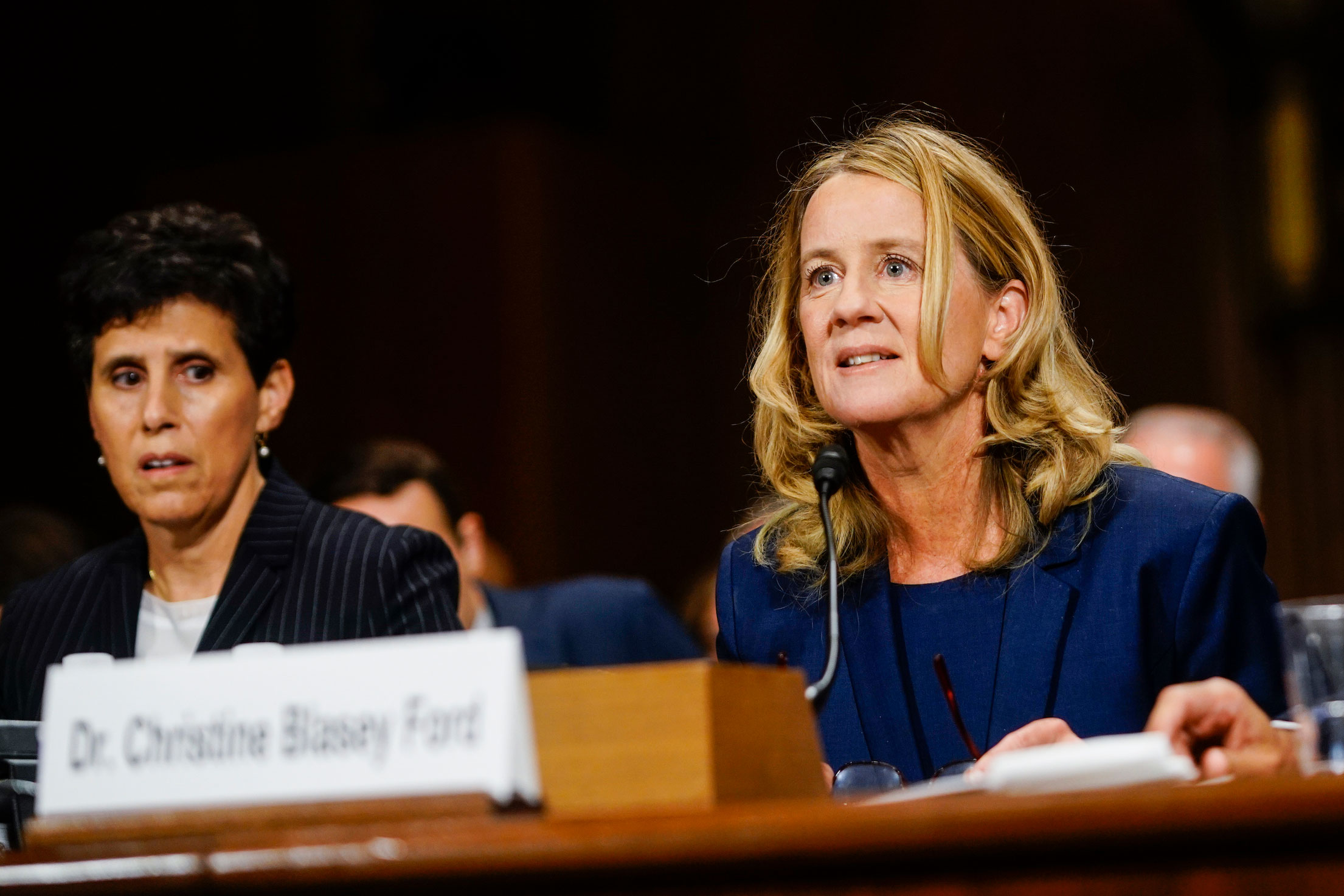 Contemporary psychoanalysis has a handy term (also the title of a song by Pearl Jam): the "unthought known," an experience that’s deeply familiar and yet never quite thought about or noticed. Author Christopher Bollas coined the term to describe both everyday moments when a new thought emerges into view, and also harder-to-grasp, murkier and more troubling intimations of trauma, which we don’t simply fail to notice — we feel obscurely forbidden to recognize it for what it is.

I’ve been thinking about this concept lately, as our entire society seems to be sharing a massive breakthrough of unthought known into awareness, in the wake of #MeToo. As a psychotherapist who often works with survivors of sexual violence, some days I feel like I’m swimming in the turbulent swell of a tsunami. Other days, it’s more like walking along the ravaged beach, picking through rubble. All of this newfound awareness might be a monumental gift, a hopeful sea change. But it’s also overwhelming.

These past weeks have approached a breaking point for many people I know, patients as well as friends and family. The Brett Kavanaugh Supreme Court nomination controversy — just the latest in a numbing, searing, hopeful, horrible two years of #MeToo revelations — seems to be stirring old traumas in new ways. For sexual assault survivors, the headlines can be liberating, but also triggering especially when they see victims being abused for speaking up.

As Dr. Christine Blasey Ford pointed out in her opening statement Thursday, traumatic memory is encoded differently in the hippocampus than memories of nonthreatening events; talking about a trauma can trigger a neuropsychological reaction of reliving the terror. “Trauma” is any experience that overwhelms our survival defenses; our limbic minds try to save us by propelling us into autonomic hyperarousal — fight/flight or freeze. But when that doesn’t work, the brain shuts us down in a state of primal collapse. In trauma, it’s as though the brain gets stuck with the gas and the brakes both pressed to the floor.

One highly accomplished, driven friend took a day off recently to sit in her pajamas and binge-watch The Walking Dead because for her, zombies are an apt image of the way her trauma feels: terrifying, yet also numbing and relentlessly unchanging. People can grow in their ability to cope with trauma, but being triggered into reliving the terror and despair is still exhausting.

On Thursday morning, my husband asked me whether I wanted to listen to Dr. Ford testify to the Senate Judiciary Committee. “Yes and no,” I said, almost unbearably scared for her. My husband turned on the radio and we listened in separate rooms until he came back to the bedroom. “I don’t know how anyone could hear her voice and not believe her,” he said.

I do, though. I know that most survivors face disbelief, not because they deserve it, but because the need not to know disturbing things is such a powerful, psychological force. I can’t judge Kavanaugh’s guilt or innocence but I know the narcissistic rage abusers typically unleash on their targets. Hence my fear for Dr. Ford: speaking up so publicly, she was breaking a primordial survival rule most women know, whether or not we’ve given it much thought.

Her story, told in a vulnerable-yet-steady tone, was full of ordinary details. A stairway. A one-piece swimsuit. Boys laughing while she thought she might be dying. A story like so many I have heard, starting back when I was a girl listening to whispers at slumber parties. It was never something to think about, not in the sense of really thinking; asking Why? But we knew a wordless fusion of sex and menace and awful responsibility for the whole mess. If they caught you, you’d be to blame. And no one would believe you. We didn’t think about it much because it didn’t feel healthy to dwell on, but there it was, an unthought known that the world kept reminding us of while at the same time demanding that we shut up about it.

So here we are, with all these revelations breaking like waves on a beach. Women all over the country are wearing black, posting selfies and stories on Facebook. Men are stunned, not sure what to say, feeling newly vulnerable. No one owns up to it yet, but many among us are also feeling shocked that they could get in trouble for things they did when they were young and, in an unthought way, having fun.

In Dr. Ford’s story, one unthought known was that the girl on the bed was a person whose pain and terror were the basis of the laughing boys’ fun. If we were all accountable to each other, if there were no exceptions to the Golden Rule, how would we look squarely at these irrational, ugly-but-human facts? Sadism is human. So is a very crude and mindless urge to dominate. Kill-or-be-killed is one ancient mode for solving the problem of survival.

But it’s also very natural for humans to get weary of violence, with its adrenaline surges and its relentlessly limited script. Survivors of sexual assault often tell me how tired they are of spending their hours locking windows, checking behind them, holding their keys like weapons in case they need them, and collapsing in exhaustion.

Will #MeToo change us for the better, so our children grow up without the burden of these old unthought knowns? For now, I’m holding my breath, because one thing I know about trauma is that it has a zombie-like way of coming back. The fight/flight or freeze reaction, driven by the limbic brain that circumvents the conscious forebrain, is highly contagious. Confronted with trauma, people have a natural tendency to react, to feel caught up in crude intensities that they need to discharge somehow. The ugly shouting during Thursday’s hearing by Kavanaugh and others was a typical example of limbic dysregulation in reaction to a real or imaginary threat. If you look at photos of the hearing during emotionally intense moments, you see signs of limbic dysregulation sweeping the room: women’s faces showing a uniform disgust at Kavanaugh’s panic and rage, his palpable desperation to reassert control.

In the grip of these strong survival-based limbic reactions, certain parts of our fore- and mid-forebrains shut down, and we lose our ability to see another person as a person, with empathy.

But there’s a safer, saner way through trauma’s infinite reactions, as we saw in Dr. Ford’s anything-but-typical poise. She spoke with vulnerability, but also strength. She did not lose herself in intense reactions, though she had every excuse for feeling threatened (her life has already been threatened). Yet she calmly shared her story in a tone that conveyed both her fear but also a moving confidence that she was a human being speaking to others who could at least possibly understand what she was saying, and could care. She spoke to everyone at the hearing with an implicit recognition of the other as a person who deserved courtesy. Her manner disarmed some observers; how do you attack someone who’s speaking to you with such mild considerateness?

In neuropsychological terms, she clearly managed to stay limbically regulated in a way that allowed her to use the full resources of her mind and selfhood. She was able to access what neuropsychiatrist Stephen Porges has identified as the “ventral vagal” mode, mediated by the front or ventral branch of the vagus nerve, a major pipeline of sensory data to the brain linking nerves in the heart with the optic and facial nerves. The ventral vagal mode is what allows us to look into each other’s eyes and at each other’s faces to accurately read and empathize with each other’s emotions — actually feel them in our own literal hearts.

No wonder my husband found Dr. Ford’s testimony so moving. I did too. Listening to her, I almost felt her heart beating in my own body. People are capable of violence, but also of incredibly more interesting, surprising, creative ways of facing our problems and being with each other. If our children and grandchildren find a way to put to rest some of our longstanding problems with sexual violence, it will be because they realize how much more interesting life is without the zombie-like relentlessness of that old, familiar desperation and the deadness it brings. They will learn from Dr. Ford and so many others who manage to be tremblingly, powerfully alive in the face of rage and panic.

I hope so. That would be a transformation worth all of this moment's overwhelming turbulence.